While I’ve been getting more minimalist with each passing day, choosing mostly to run in thin huaraches, I definitely think there’s a time and a place for full coverage. Most especially in cold weather and in the gym. In those cases where I need full coverage and perhaps am not in the mood for any of my toe shoes, I’ve typically reached for the Inov-8 Bare X 200. But as one of the commenters on that previous review pointed out, the Bare X 200 is not specifically a CrossFit shoe. It’s a point to which I would object, as there is a difference between how a shoe (or any product, really) is marketed/positioned and whether it’s actually effective in a given situation. Most of the time when I have the Bare X 200s on, it’s for CrossFit as opposed to running. Yet, he has a point. If a shoe Inov-8 built and positioned carefully for running works so well for CrossFit, then what about an Inov-8 shoe that is specifically positioned as a CrossFit shoe? You’d end up with the Bare-XF 260. Let’s see how closely Inov-8’s vision for CrossFit matches up with the reality.

First off, when I got these shoes I took them out of the box, tried them on, then left them sitting out to wear to the gym the next day. My cat promptly vomitted on them. Obviously that meant I had to wash them before taking pictures. So if they seem a little faded or worn in the pictures, blame me for that. The Bare-XF 260 has a unique look from the get go. One of my fellow athletes referred to them as my “Marty McFly” shoes, given the retro-futuristic look. At first I didn’t really like the look, but it quickly grew on me. Being that these were the first velcro shoes I’ve worn in a while it was actually kind of fun to not have to worry about laces. It was like being a kid again. 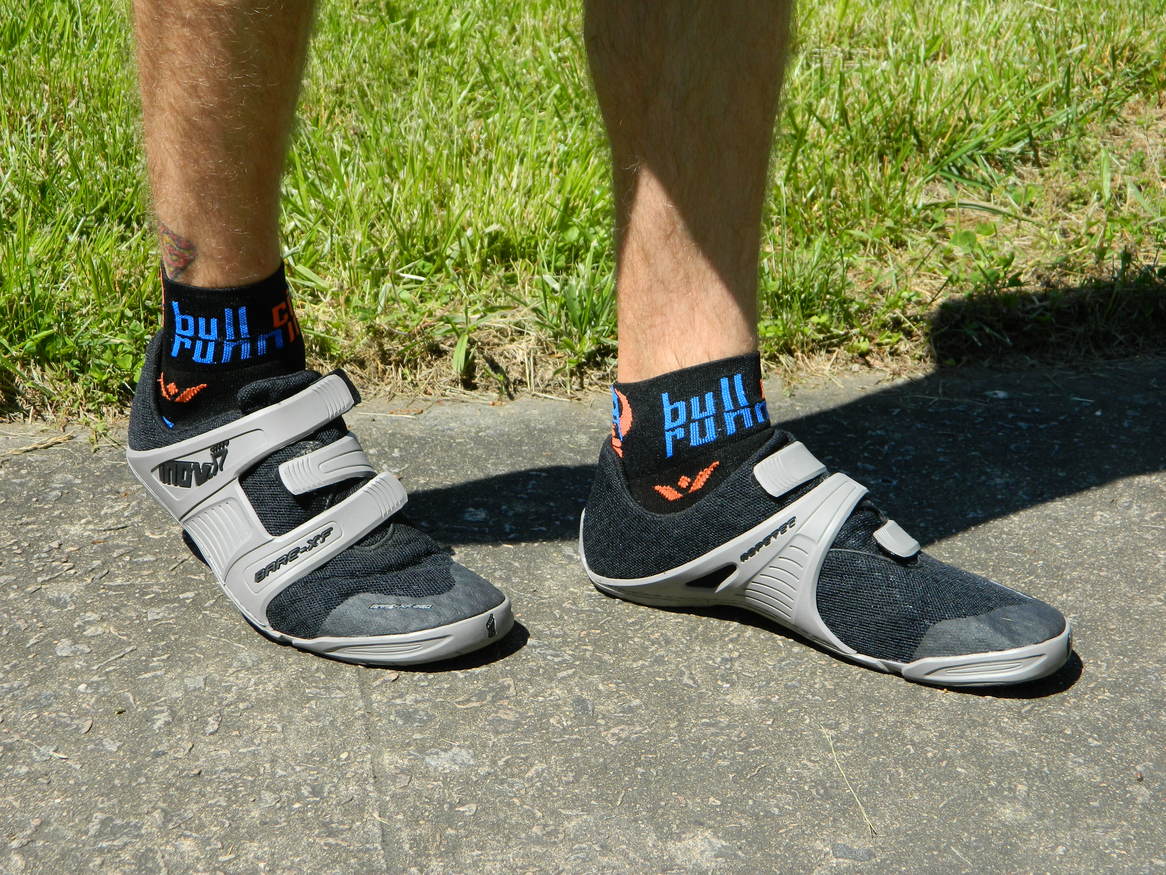 The basic stats are very close to the Bare X 200: Ostensibly the only difference with the Bare-XF 260 is that the weight is 1.2 oz. higher. Right? Well, yes and no. On paper the only difference is weight, true. But on your feet there’s a lot of difference. I felt like the sole of the Bare-XF 260 wasn’t quite as flexible as the Bare X 200 even with the insole removed. The shoe as a whole felt a lot stiffer. This is likely because of the way the sole wraps around your foot in the form of the velcro straps. This structure is pretty solid and is not particularly forgiving of multi-directional movement. More on that in a moment. In contrast, the mesh portion of the upper is super thin, light, and very breathable. It feels almost delicate but performs well and stays strong.

One of the main CrossFit-style features of these is the sides being engineered for rope climbing. For that they work wonderfully. If your rope climbing form is good you’ll find that these shoes put the rope directly in that sweet spot and add a little extra grip. The high breathability of the Bare-XF 260 is also quite excellent. Getting out there on hot days doesn’t bother my feet at all. The faster Olympic lifts felt really sturdy and solid. No more so than any other shoe, but they definitely performed adequately in that department. 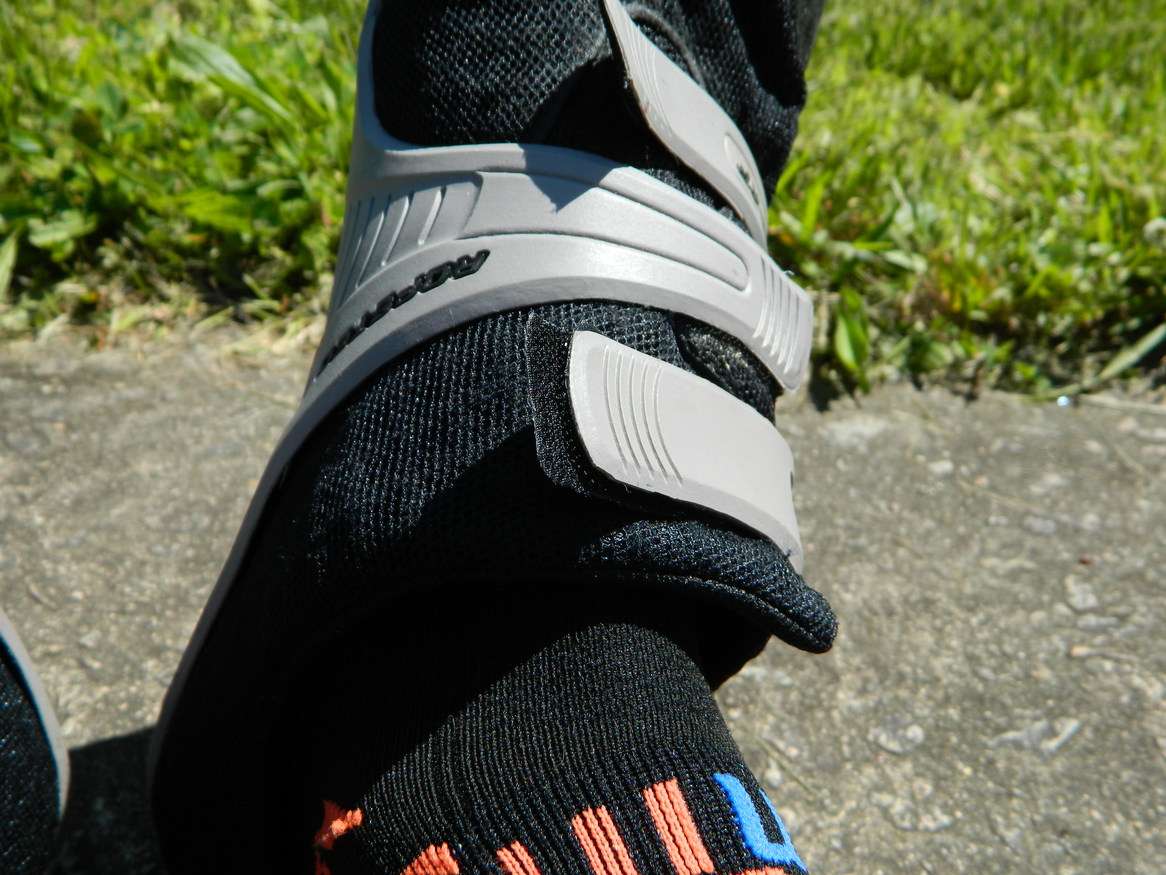 One of the sections of velcro that started coming loose immediately.

I felt awkward running in these even just for short WOD distances. Compared to other minimalist shoes, the Bare-XF 260 feels clunky. I was plenty forgiving of the fact that they look clunky, but since they also feel that way I can’t overlook it. The benefits of the nearly-full-wrap sole material are rather negated by the stiffness that comes with it. The rubber is just too stiff and creates a cumbersome feeling. Also, incorporating it into the fastening system — while innovative in theory — was a bad idea. In contrast to the more familiar loop velcro, where you have the benefit of extra tugging, with these you just lay it down on a separate piece of the shoe. It doesn’t feel as secure and indeed does come loose rather easily. That’s not even taking to account the fact that the velcro is attached to the shoe via sticky strips as opposed to secure stitching. Two of the pieces were already peeling loose when I opened the box for the first time, so I’m sure you can imagine that they’ve come apart even further after many uses. Last but not least, these just feel relatively cheap next to some of Inov-8’s other offerings. Which is especially frustrating for a shoe priced at $140. Mind, as luck would have it, TheClymb has a sale on Inov-8s starting today, June 17, and the XF 260s are part of that sale, listed at about $60, so that’s better if these shoes are up your alley. NOTE 1: If you’re not yet a member of the Clymb, that link is going to ask you to login or join. Use the invite link here. NOTE 2: Seems TheClymb has a coupon for an extra 10% off today CLYMBEVOLUTION, so there’s that. (Since you might not be sold on the XF 260, note there are some other options (like the Bare-X 200 I reviewed here) among others.)

This is the first shoe review I’ve done where my opinion trends mostly towards the negative. It’s just kind of a let down of a shoe. I can appreciate the “Rope-Tec” in theory but unless you climb ropes a LOT then this just isn’t a convincing enough reason to drop that kind of money. There’s some good ideas here, they just seem poorly executed.