I’ve been an avid “zero drop” (neutral sole height from heel to forefoot) shoe proponent for many years. My first pair of Vibram KSOs ruined me for all “normal” footwear, and when I started a new corporate job I needed something more professional.

I work for a company in Southern California that works very closely with local law enforcement agencies and fire departments. Our customers come from a paramilitary culture and things like dress code are very important. The dress code for men in my office is slacks and a dress shirt with a tie being optional. I needed to find some shoes that still looked professional, but were still zero drop.

I read the Run Amoc DASH review and thought I may have found a great solution. I opted for the smooth black leather on the body of the shoe and the black suede leather for the saddle portion (You can actually build your own combination on Soft Star’s site). On the Soft Star website they almost look grey, but in real life in is two shades of black.

Soft Star Shoes has some of the best customer service I’ve ever experienced. I called to ask a sizing question and I was told about a sale that would be starting in a few days. They gave me the sale price even the sale wasn’t active yet, and told me a little known secret that they do offer half sizes which aren’t listed on the website. My foot felt like it was right in between the 10.5 and 11 so I ended up ordering both with a promise from customer service that I could send back the pair that didn’t fit for a refund (they made good on this promise when I returned the 11s.).

So how’d the do? Read on to find out! 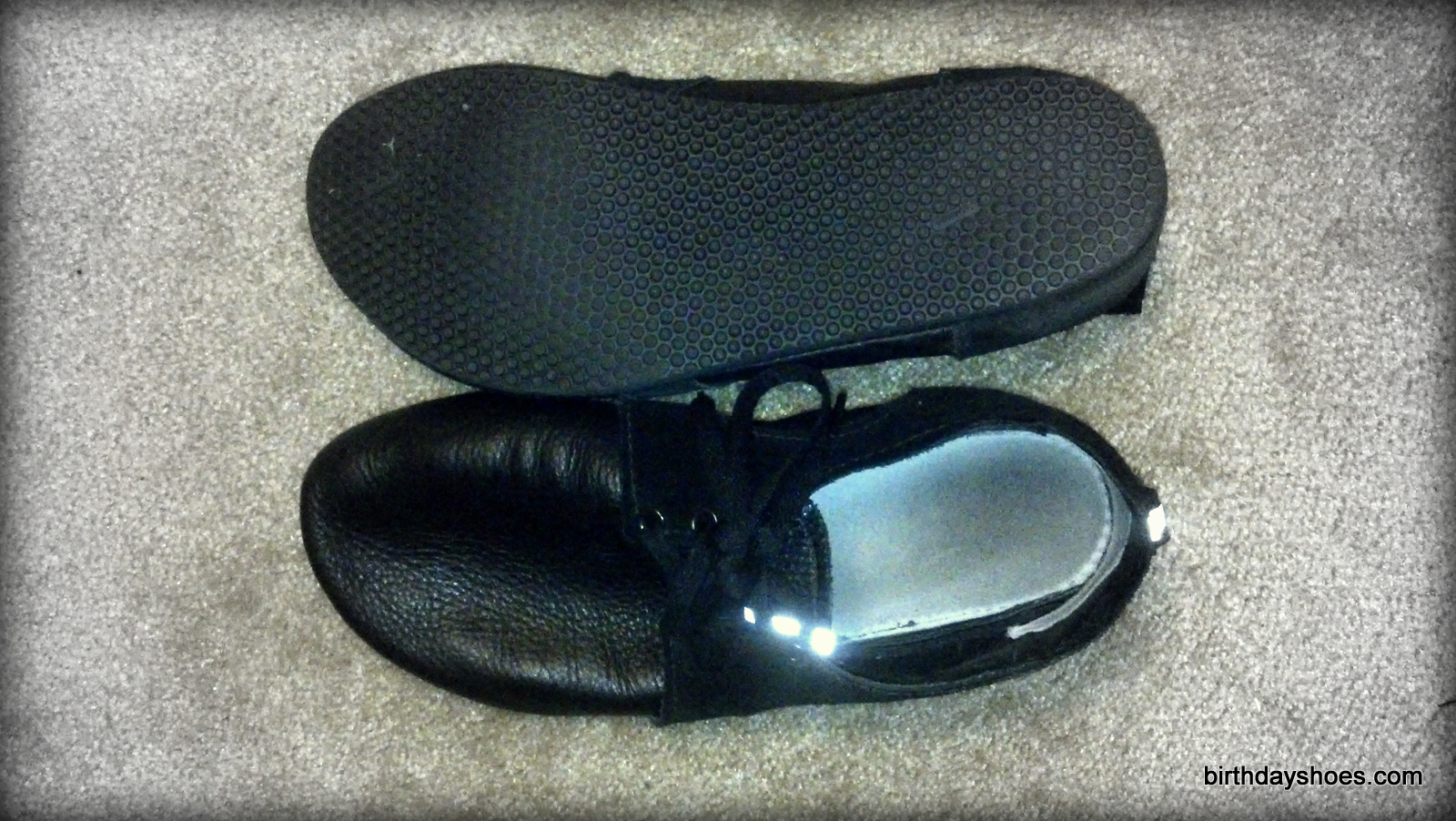 The RunAmoc DASH arrived a few days later and I was impressed with how they blended simplicity and quality in a great looking shoe. They are quite comfortable, and I didn’t feel any hotspots or points of wear. The foot bed of this shoe was unlike any of my previous shoes. Soft and comfy (made of leather I think?) yet I still had a good amount of ground feel. I’m a huge fan of Vibram soles and chose the slightly thicker “trail” at 5mm thick.

There is an extra piece of leather that is sewn in near the heel. At first glance I assumed there was no way the shoe wouldn’t slip and flip flop around. Surprisingly, the heels didn’t slip up at all and the fit was fantastic. My only real complaint out of the box was the length of the laces. Even when double knotted the bows were close to dragging on the ground.

Safe for Wear to Work? 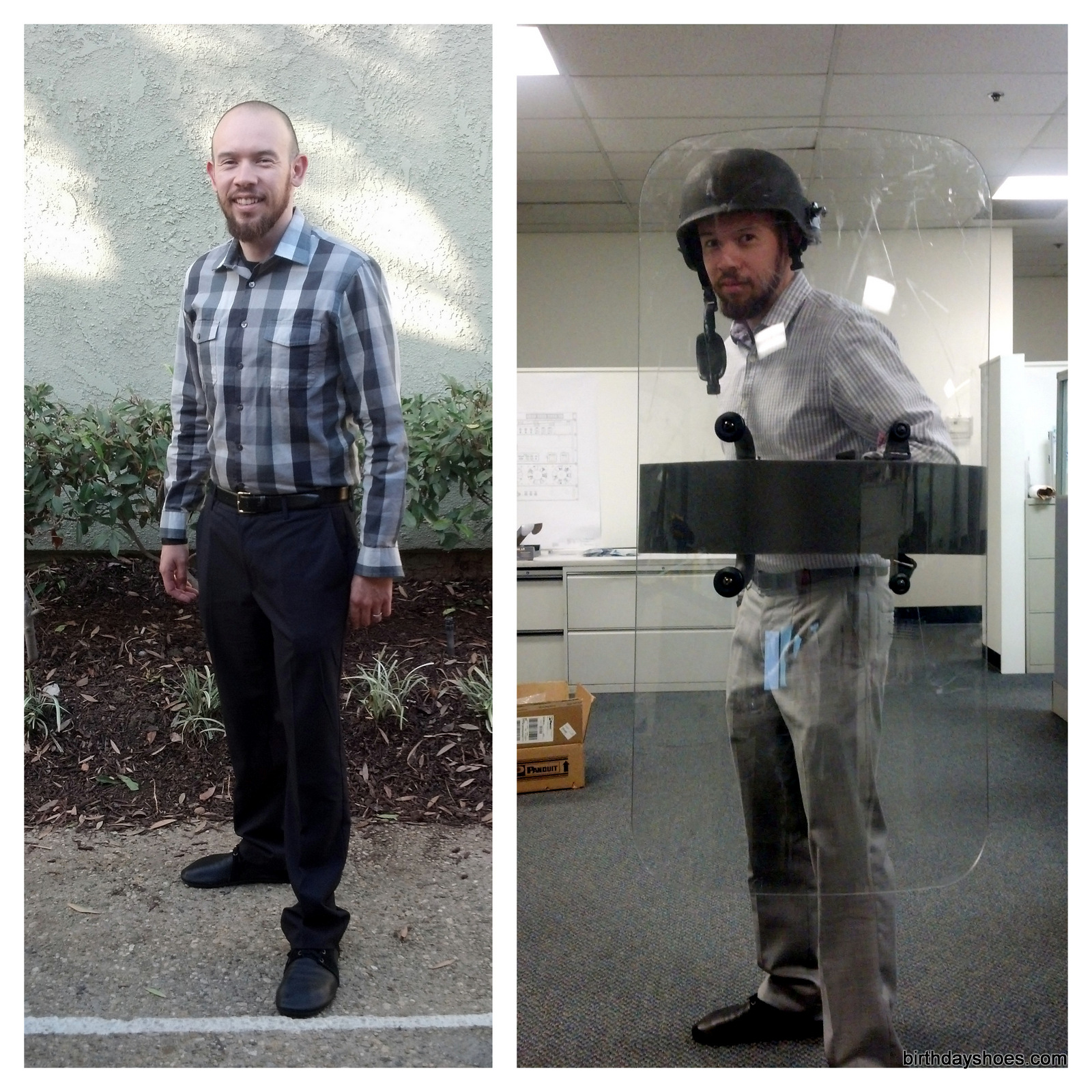 On the left, dressed for work in the RunAmoc Dash! On the right—one of the law enforcement agencies my company works with left behind some riot gear, and it made for a great photo!

My wife gave them the seal of approval and after wearing them around the house for a bit, I was ready to try them out at work. Dress code is important at my office (we don’t even have a casual Friday policy), and I had high hopes that they would suffice in the corporate world.

Remember that scene from Shawshank Redemption where Andy steals the warden’s shoes? This was one of the key things he needed for escaping from prison (spoiler alert, but it’s been out for almost 20 years) and taking care of business after he got out. Here’s a quote from Red: “Andy did like he was told, buffed those shoes to a high mirror shine. The guard simply didn’t notice. Neither did I…I mean, seriously, how often do you really look at a man’s shoes?”

This was my philosophy “How often do you really look at a man’s shoes?” I wanted zero drop shoes, but not something that would stand out and draw attention to my feet. The RunAmoc DASH don’t really have any shape to them. The leather is quite soft and there isn’t stitching going over the toes. Thus when the shoes are worn you can see your toes under the leather kind of like small indentations. This in no way affects comfort rather it just looks different and could draw some extra attention.

So how did they do in the office?

When I wore my new RunAmoc DASH to work no one really noticed for the first week or so, and then a few people asked about them. I gave them the same zero drop lifestyle pitch that I give to people who approach me about the five fingers I wear outside of the office. They pair surprisingly well with slacks and a dress shirt, and despite a few comments about seeing the toes under the leather I received several compliments.

I mainly wear them around the office, but I’ve attended a few trade shows sporting the DASH. Tradeshows typically mean a long walk to and from the car to the convention center, and then standing all day in a booth. After about nine hours of standing my feet felt a little tired (as they would in any shoe), but I can’t think of anything else I would have rather worn. I’ve also paired the RunAmocs with a suit to a few different weddings, and yes they are quite easy to dance with! 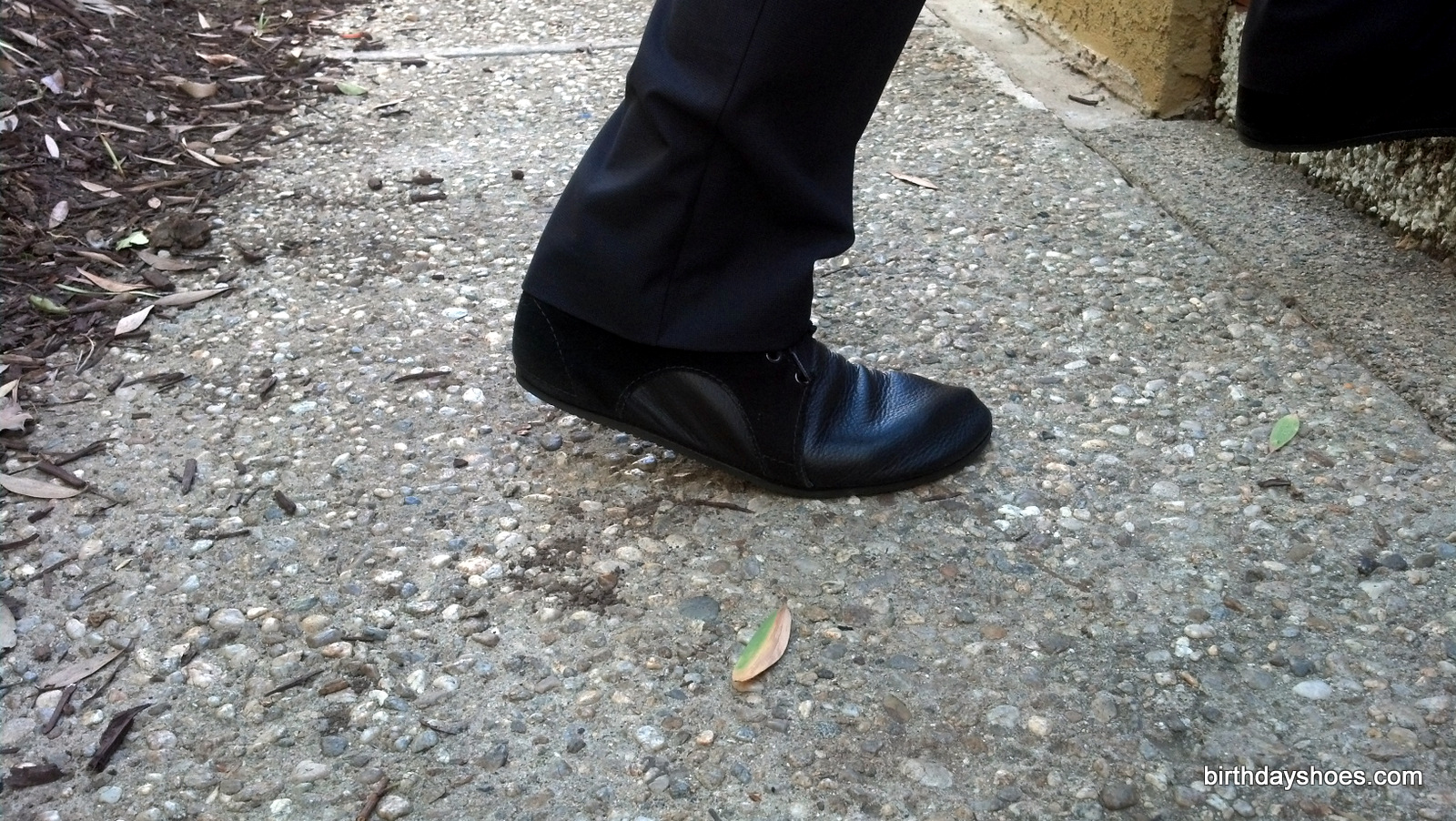 In the six months I’ve had them I’ve noticed a little bit of wear. The foot beds on the inside have worn comfortably to the shape of my feet. I’ve got a few little scratches in the leather, but that is to be expected. The Vibram sole seems to be wearing faster than I expected for just walking around the office on carpet and a little concrete. The main leather body is showing some wear lines, but it adds character like a broken in leather jacket.

Overall, I’m very impressed with the RunAmoc DASH. Very comfortable, stylish, and great if you work in a place that requires professional attire and footwear. I think I’ll probably get an additional pair for hiking and the outdoors that I don’t mind getting dirty.

Dan Finkelstein is a guest writer reviewing the RunAmoc Dash. He blogs at mynameisfoxtrot.com which covers firearms and movies.

Dan Finkelstein blogs at [url=http://mynameisfoxtrot.com]My Name is Foxtrot[/url], which covers firearms and movies.