When it comes to minimalist/”barefoot” shoes, it’s not unusual to have some unconventional designs. For example, while moccasins like Soft Star Shoes and huaraches have been around for millenia, they don’t really look normal next to a pair of Air Jordans (yes, this is strange); and of course, toe shoes have a long way to go before anyone thinks of them as commonplace. So it takes a special kind of shoe to cause me to do a double-take — and that’s exactly what I did when I first saw BeNat Shoes. A unique shoe made of a lace and a riveted sole that wraps the foot from the ground up, BeNat Shoes are evocative of a Roman boot; or perhaps a mutant huarache sandal sprung to life and making a meal of a hapless, unsuspecting foot! I digress. I was put in touch with the man (Michael) behind BeNat Shoes — BeNat is based in Germany — and was provided with a pair of BeNats to test out. What follows are my initial impressions of these hyper-minimalist, incredibly unique shoes! 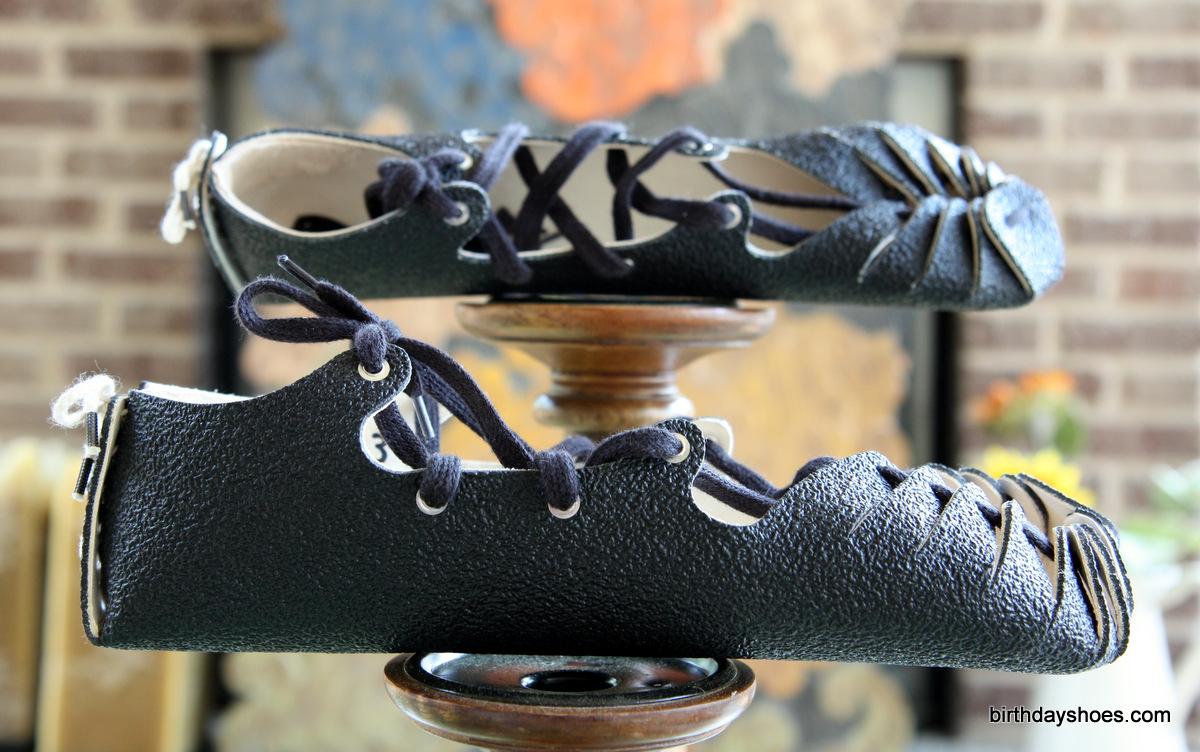 The BeNat sole is leather bonded to a synthetic material; the sole has numerous rivets through which laces run to wrap the shoe upward.
Having taken in the various overlapping flaps of the BeNat, one can’t help but wonder what they’d look like laid flat. I’ve not had the heart to delace them (perhaps for fear of getting them laced again correctly), but I imagine the result would look a bit like a stretched out starfish with a lot more arms to it. Each “arm” would end with a hole through which a single lace can pull all the arms together, effectively creating a sole that can wrap around the foot. It’s a fascinating footwear design and I can only imagine the iterations it took to get the template dialed in. As far as the sole material is concerned, the BeNat is composed of two layers of material. On the outside of the sole you have a thin layer of synthetic material (rubber?) bonded to the insole, which is an incredibly soft, supple leather. When shaped into the form of a shoe as with the laced BeNat, the result lacks a lot of structure. This is most apparent when you look at the empty shoes as in the full-sized photo above — the sole just curves right up to the upper. This lack of structure means that BeNat shoes aren’t much of a shoe at all (that’s a compliment). Here are a bunch of photos of the shoes sans feet. 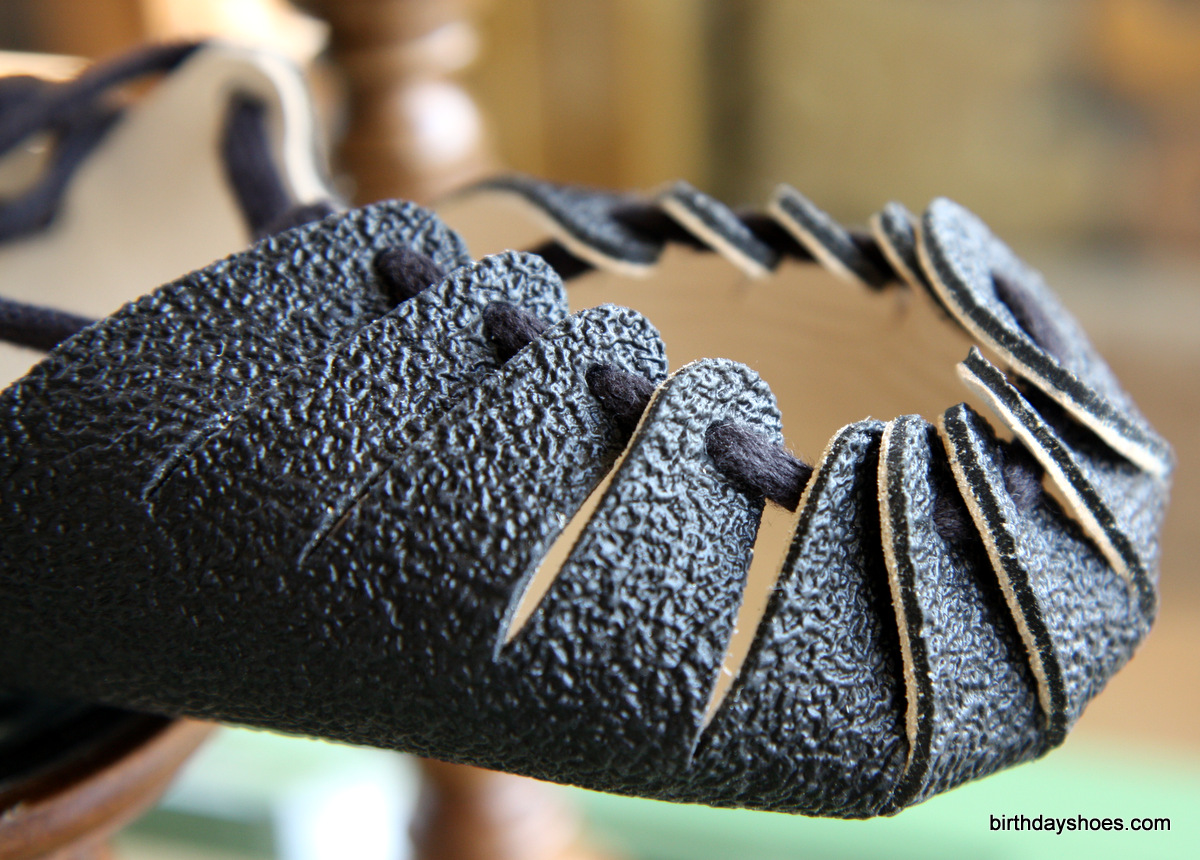 One of the benefits of the BeNat’s multi-armed “toe box” is that it can expand or compress to fit various foot widths. The way this works is that the that runs the perimeter of the toe box can be increased or decreased in length, effectively making the toe box larger or smaller, respectively. For whatever reason, the BeNats came to me with an overly narrow toe box, but custom fitting it was as simple as loosening the knot a bit, pulling more lace into the forefoot area, and resetting the arms to the new lace level. You can see the results in the photos below, going from tight to right and then to me flexing my toes (as viewed from left to right):

The front of the BeNat shoe can expand by untying a double knot, letting through more lace, and then retying the double-knot. You can see how this expands the forefoot from left to right in this progression.
Another benefit of this design is that by wrapping the toes so closely, when you wiggle your toes, you get better sole adherence — the sole tends to lift with whatever toe or toes you are flexing (Good for a traditional toe box’ed shoe).

The BeNat sole is incredibly thin. My calipers peg the total thickness (which is the “stack height” as well as the thickness of the upper) at a whoppingly minimal 3mm! Needless to say, these shoes are “zero drop,” too. The 3mm of sole is also super flexible (again, see how the “shoes” roll into themselves as in the photo above). You get a huge amount of ground feel while wearing the BeNat shoes. Surfaces are readily experienced through the 3mm sole. That means if you’re wearing them you have to pay close attention to where you step (this is not a bad thing). If I had to compare the ground feel on BeNats to other ultra-minimalist shoes, I’d put it somewhere slightly less than Soft Star Roos but better than a pair of Classic FiveFingers (or the Sprints, which have the same sole thickness as Classics — 3.5mm of Vibram rubber plus whatever insole thickness is there—call it 4mm).

BeNats move dynamically with your foot. As mentioned above if you dorsiflex your toes, the BeNats move with your toes (every so often my big toe did mange to escape the toe box, which is a consequence of the limits to the forefoot/toe box design). They have no structure and no arch support. How could they? When the sole makes up what little upper there is, well, you’re a bit limited on things like structure! 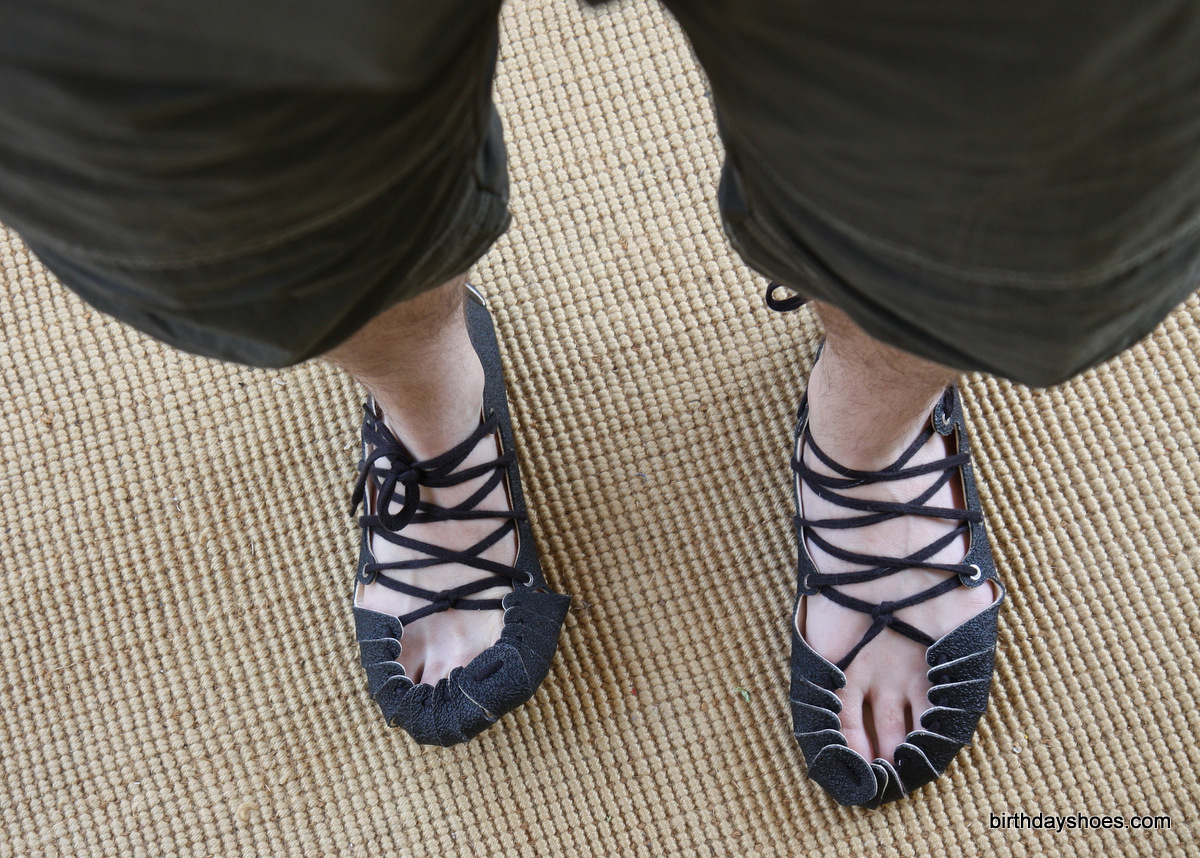 The immediate reaction these shoes evoke is that they are gladiator shoes. Hard to argue with that aesthetic!
BeNat shoes require a very unique style to pull off. Any time you have a lot of laces wrapping a bare foot, the first image that springs to the mind is that of a Roman circa A.D. 30. The BeNat shoes have that look dead to rights, but they also have a very natural aesthetic to them, thanks to all the “arms” that effectively are hugging your foot (They also remind me ancient footwear — see here and particularly here, for examples) Meanwhile, BeNats are so distinctive in their look and so unique in their design that wearing them without attracting attention will be next to impossible. Embrace the look and just roll with it. I’ve yet to attempt this, but I’ve an idea about replacing the single-lace of my BeNats with various disparate laces (maybe using individual lengths of hemp rope) that would accomplish the same overall goal as a single lace but eliminate the criss-crossing (e.g. one rope for the forefoot knot; individual lengths of hemp for each rivet over the top of the foot). Below are a few photos of me donning the BeNats — could you see yourself pulling these shoes off?

I love the idea behind the BeNat shoes; it’s a cool concept and design and I applaud Michael for taking his idea and making it a reality. Meanwhile, as minimalist/barefoot shoes go, it’s hard to beat the BeNat for ground feel and general adherence to the foot’s dynamic nature. I’d venture to say that the overall combination is a balanced compromise between being fully barefoot while still having something on your feet: BeNats put you in the “just right” zone for both. The only drawbacks to the BeNat shoes is that the aesthetic is going to be a turn off for many — too eye-catching, too retro (Roman times! 8,000 B.C. times!); two, I’m not sure these would be up to the task of road running or any distance running as I’d expect both to wear down the sole prematurely, nor would I want to wear them for a trip to the gym. Three, the laces can be a bit of a chore to dial in initially; but subsequently they just tie like a typical laced shoe. Where might the BeNats find their niche? I could see them going on a summer hike (nothing too demanding) or being worn for general nature exploration; they’re strong enough to handle whatever you’re likely to throw at them as they’re a well built piece of footwear; it’s just how much you want to push that envelope, pay attention to your steps, and enjoy the resultant foot massage!

BeNat shoes can be purchased off the BeNat website for €89. They size in European sizing (my FiveFingers size is a 43; my BeNat size is the same).