Color Me Rad in Xero Shoes

“You know, I was just thinking that you look pretty grungy,” one of my friends said, “Even for you.”

We were walking with the crowd towards the start of the Color Me Rad 5k in Raleigh. I was wearing an old white t-shirt like pretty much everyone else, but also 4mm Xero Shoes and the most ill-fitting athletic pants I owned. I bought the pants at a thrift store the day before without even trying them on. They fit okay at the waist, but only reached down to about the middle of my calves — transforming them into ratty capris. My overall look was something akin to a homeless yoga instructor.

But it was okay, because I wasn’t planning on wearing them for long.

My friends all knew what was coming. They were waiting for it with some mixture of anxiety and morbid curiosity. Even so, when we found our way to the start line and I stripped off the t-shirt and jogging pants, leaving me in nothing but the huaraches, raspberry-colored briefs, and blue sunglasses, they still seemed shocked. There were shrieks and lots of laughter. Immediately it was more intense than I was even expecting, with everyone pointing my way. And the first, “Can I take a picture with you?” was asked. It would become the phrase of the day. Aside from those brave souls, everyone else gave me a wide berth. I found myself in the middle of a very crowded start pack but could stretch my arms out in all directions and not reach anyone. Nice fringe benefit, that.

Then the race started. From the outset it was obvious that this course wasn’t designed for or used by runners with any regularity. It started at the exit of a gigantic amphitheater in the area (the kind of money hungry place that turns off the water fountains during concerts in order to force people to buy bottled water at outrageous markups) and continued onto some trails surrounding the area. These trails were much rockier than I was expecting them to be, more closely resembling mountain hiking trails or even hastily-made construction paths in terms of rock size and looseness. Had I been aware of this, I may have opted for shoes that were a little thicker and with a bit more tread.

But I’m glad I didn’t. Although I did feel a little more underfoot than I’m usually comfortable with, complete with a few “ouch!” moments, on the whole my feet came out much better than I could’ve hoped for. My toes were a little tender, but that was my fault. I tend to trim too much off the forefoot of all my huaraches because I generally like the feeling of my toes sticking out over the edge a bit. Normally that’s fine, but on paths this rocky it can be brutal. Wearing my thinnest possible huaraches on terrain like that was a wonderful challenge.

This was the first 5k I ran where I didn’t really get tired at all. This fact is probably more of a testament to the silliness of the race than it is to my level of fitness, though. Every time I passed a group of runners I’d be followed by peals of laughter, cheers, and always at least one surprised remark along the lines of “Oh my god!” or “That naked guy came out of nowhere!” Whenever I reached the front of a pack I’d immediately speed up to try to catch up to and pass the next group to continue the game. It was remarkably encouraging and kept me in good spirits all throughout. One of my favorite moments started as one of my most anxiety-inducing. At one point the course turned down a road and approached an intersection where a whole herd of serious-looking cops were directing traffic. Then one by one they saw me and just started laughing, with one of them adding, “That’s just wrong!” 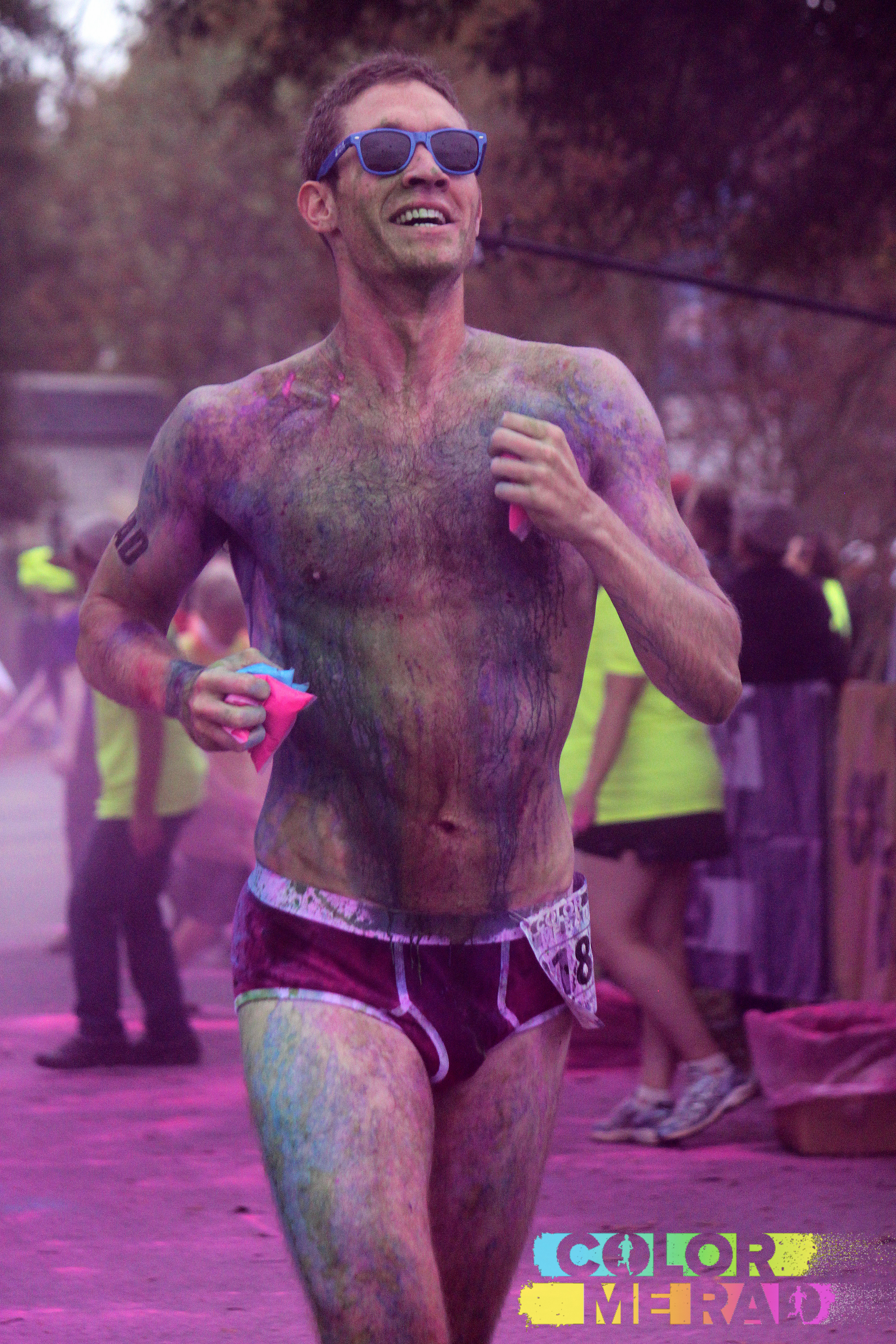 At each color station I’d get especially pelted by the volunteers, though those were nothing compared to the finish line. The crowd erupted as I came bounding down the final stretch, and I ran through the finish line totally blind as color bomb after color bomb hit me in the face. The race wasn’t officially timed, but I’m quite certain that 1) it wasn’t a full 5k — felt too short even with all the fun, and 2) even if it had been a full one I would’ve easily gotten a PR given how fast I was flying. But I didn’t wear a watch for this one as I wanted to stay as minimalist as possible.

I’d stayed far enough ahead of my three cohorts that I had time to grab a bottle of water and find an excellent spot to cheer with excessive enthusiasm in order to continue embarrassing them as they approached the finish.

Afterwards, we wandered back into the amphitheater to take “after” photos. I continued getting requests for pictures and was happy to oblige, thinking “Mom’s going to be so proud!” the whole time. But the big moment was as we waited in the crowd to participate in the big group color bomb explosion. An announcer was throwing out Color Me Rad shwag from atop a construction lift and spotted me. He joked that while everyone else’s desire for the various freebies was a matter of “want,” mine appeared to be more a matter of “need.” “I think that guy even ran in flip-flops!” he exclaimed. Then he mentioned that at very least I deserved a free hug and everyone should come hug me, at which point throngs of strangers descended upon me. That was a bit scary.

The Xero Shoes got nearly as much attention as the outfit. I later came across discussions on Facebook along the lines of, “We saw that underwear guy, too! Did you see his shoes?” The local paper mentioned me in their write-up of the event and brought up the shoes, as well. The blurb about the huaraches is relatively short, but when he was interviewing me that was a primary point of discussion. Kids were the least dubious about them, as more than once I overheard, “Can he really run in those? I want some!”

This was definitely my favorite race in terms of sheer fun factor. Everyone was in such a good mood from start to finish. People were laughing and smiling non-stop. It really felt like everyone was welcome except for sourpusses. Even though I hadn’t set out to offend anyone, I’d still been expecting that someone would be. But nobody said a single negative word. Kids and parents were pointing me out to each other and laughing in equal measure. The one moment I thought I heard something negative quickly turned into a joke, too. A young mother sternly said, “Hey now — this is a family event!” before adding, “But I mean, *I* certainly don’t mind.” 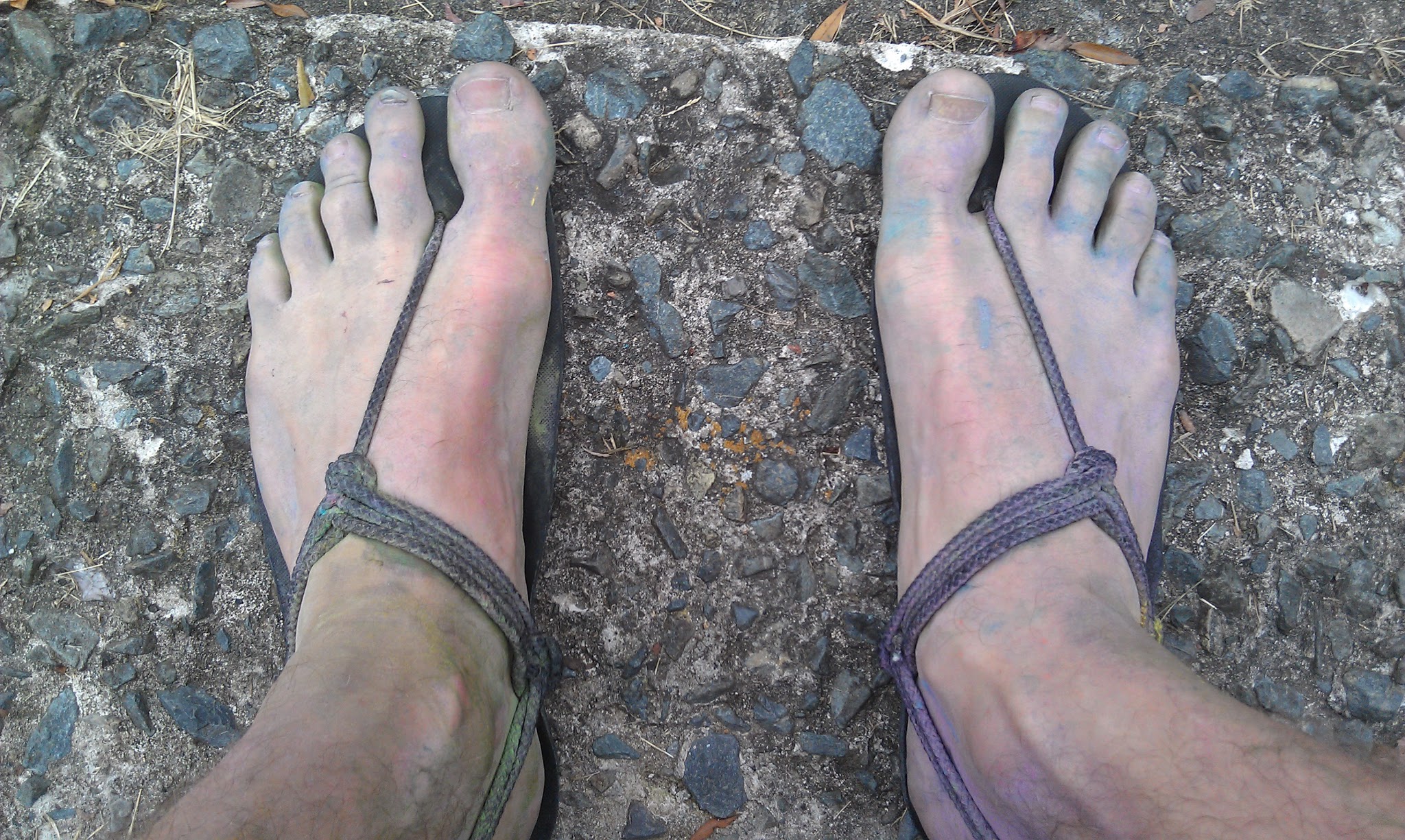