Feeling Fitness Deep Down In My Sole

As a competitive raw powerlifter, when I’m getting prepared for an upcoming meet the majority of my training is strength-oriented and focused on optimal performance in three lifts: the barbell squat, the bench press, and the deadlift. As I’ve transitioned from traditional footwear to weightlifting-specific footwear and now to Vibram FiveFingers, I have both increased the efficacy of these barbell movements and also greatly increased the efficacy of my overall foot performance in day-to-day life.

Tim gets ready to deadlift in his blue camo KSO Five Fingers.

I’m an unequipped powerlifter which means I wear no performance enhancing gear, only a belt and loose fitting knee sleeves are allowed by my federation — USA Powerlifting. Given those minimalistic restrictions, my FiveFingers are an asset in optimally performing all three of my contested lifts in general and essential to the back squat in particular.

Due to the squat’s complexity, extreme range of motion, the numerous joints acting as movers, and the degree of stabilization necessary to support a weight on the upper back, optimal foot recruitment is crucial to perfecting this movement. Even before the weight is ever squatted, simply stepping backwards out of the power rack with upwards of 400 lbs resting on my back can be almost as much of a challenge as the actual squat movement itself. It’s essential that I have full command of my feet at this point since every step I take to get myself into position demands energy — energy best reserved for the squat itself. Taking any more than two steps back becomes exhausting and risks a failed attempt. Wearing my FiveFingers I am able to ensure each step is surefooted and precise. The lack of heel on the V5Fs allows me to keep my feet closer to the ground with each step, keeping my center of gravity lower and avoiding sway from one side or the other. The adherence of the heel to my foot also allows a graceful transition of the full weight of my body to the ground from toe to heel, and the razor-siped soles prevent slippage and keep my feet firmly glued to the platform.

Tim demonstrates a squat in his Vibram Five Fingers.

Once in position I have a much greater (excuse the pun) grasp of the squat movement itself. The heightened sensitivity of my feet against the floor allows greater awareness of my body’s center of balance. It’s critical that the weight of the barbell be evenly distributed across the mid-foot region. The increased mobility of my toes allows them to literally grip the floor — much as my hands grip the barbell — further increasing my base of stabilization. An added benefit to the FiveFingers over being completely barefooted (aside from the fact that sport regulations ban any such lack of attire) is the considerable traction they provide against the ground. The combination of sweaty feet, a flush lifting platform, and hundreds of pounds teetering precariously on my shoulders could well be a disastrous one, so the “grippyness” of my Vibes is a welcome benefit to ensuring a stable foundation.

Another critical function that the V5Fs provide is that their lack of cushioning allows optimal force transfer to the ground. Imagine what squatting a heavy weight on a mattress would look like and you can get some idea of what it’s like to squat in a pair of heavily cushioned sneakers. A portion of the force generated by the body against the ground is absorbed by the shoe which diffuses it instead of transmitting it directly to the ground. An unabated transmission of force from the barbell to the feet to the ground increases stability and efficiency, ensuring that energy is preserved for a successful squat attempt.

Of course, all of my training is not limited to powerlifting, I draw upon a wide array of modalities to better sustain a broad-based fitness. My FiveFingers have been equally beneficial in those pursuits, including dynamic training movements like power cleans, box jumps, and kettlebell work. Remember what I said before about how squatting on a cushioned shoe (the mattress) absorbs the force/energy transmission to the ground? That is even more so the case when it comes to jumping or speed movements and training in Vibes optimizes that force transmission better than anything else short of being barefoot. In other words, Vibes will literally make you jump higher and run faster!

Tim demonstrates box jumping in his KSO VFFs: Rising to the challenge!

How the benefits of resistance training extend to everyday life

I’ve explained how V5Fs have increased the strength and efficiency of my sport, but even more important is how my sport, with the assistance of my FiveFingers, has increased the strength of my feet in more conventional settings. We know that once you take away the structure of traditional shoes that the burden of support is shifted from the shoe back to the foot where it rightly belongs. We also know that introducing a stress to the feet, say in the form of a support deficit, creates a stress adaptation to compensate for that deficit, hence making the foot stronger and more able to deal with the demands that are randomly placed on it. By increasing those demands to an even greater degree through the addition of external resistance, such as with strength (powerlifting/barbells/kettlebells), power (Olympic weightlifting/kettlebells/plyometrics), or speed training (sprints/hill running/plyometrics), we can also increase the fitness of our feet through all walks of life (again with the puns!).

It is essential for the foot to support itself under it’s own bodyweight, but by increasing the body’s overall load to one greater than the amount of one’s bodyweight we are able to proportionally increase the strength of the foot, ankle, and calf for all life’s demands — whether they be walking, running, jumping or any other kind of footwork.

In case you’re wondering to yourself, why in the world would I ever need my feet to sustain a weight more than that of my own body-weight, consider this analogy. Imagine you’re driving your car, which happens to weigh exactly 1,000 lbs with you in it, along a deep canyon which you must cross and you arrive at two bridges spanning the gulf. The first bridge has a maximum capacity of 1,001 lbs and the second bridge has a maximum capacity of 10,001. Even though both bridges are strong enough to support the weight of you and your vehicle, which one are you more confident to drive across? Call me crazy, but I don’t think we should consider the support capacity of our feet any differently. Life is random and unpredictable, and no matter what challenge may arise, a stronger foot is more capable of rising to any challenge. That ability will build the foundation for a stronger life well lived.

We are all already aware of the immense benefits of replicating barefootedness; increased foot, ankle, and calf mobility and stability; muscle, tendon, and ligament strength; and proprioception to the ground, flexibility, and balance. In my own training I’ve found that added resistance in the form of a weighted barbell or dynamic power and speed movement only adds to these benefits. This not only has applications for training inside the gym environment, but it also has legitimate carryover in the “real” world, even when in the absence of an external resistance because a stronger foot is a better functioning, more versatile foot.

Vibram FiveFingers have definitely helped me to bridge the gap between the exercises I perform everyday in the gym and the more traditional, but sometimes unpredictable, activities that I perform everyday outside the gym, too (e.g. scaling a wall, climbing a tree, changing a tire, moving furniture, or escaping from the police). By getting me closer to barefoot my FiveFingers have helped me take my fitness level from the ground up and I hope it can yours as well.

Tim Donahey is a NASM Certified Personal Trainer and competitive raw powerlifter in USAPL. Currently he works as a sustainable fitness coach and owner of Sustainably Fit in Columbus, Ohio where he resides and you can join him on Facebook or follow him on Twitter. 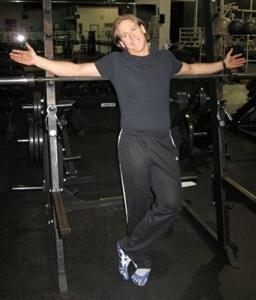 Tim is also the brains behind the KSO Trek for women and small-footed men petition and is a regular at the BirthdayShoes Forums (He goes by the moniker “Bango Skank”). Tim was also recently chosen as a winner of Vibram’s Facebook photo contest for his plyometric box jump photo. In short, Tim is staying busy and has done a lot to not only further VFF awareness but also teach others about being healthier and more fit — sustainably fit as it were.