New Balance recently released a new shoe built on the Minimus platform — specifically the New Balance Minimus Life/Wellness sole. It’s called the newSKY. What makes the newSKY interesting as a shoe is less the fact that it has a minimal amount of sole and more that its upper material is 95% made from PET recycled plastic bottles.

Shoes from plastic bottles-how about that?

As I’m still a huge fan of my Minimus Life shoes, I was eager to test out the New Balance newSKY and the folks at NB were kind enough to shoot me a pair.

What’s this recycled plastic fabric like? How do they fit? Are they barefoot-minded? These questions answered and more after the jump!

Plastic Fabric? What’s up with that? 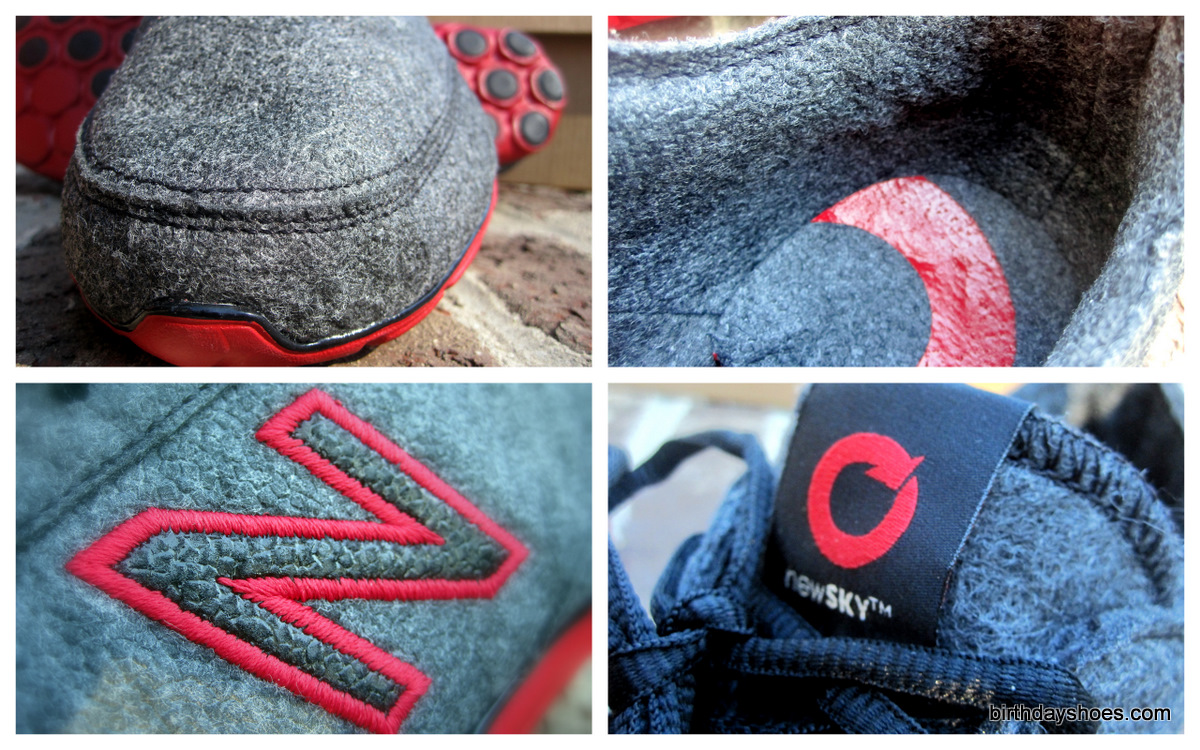 Close-ups of the New Balance NewSKY show the texture of the plastic-based fabric. It’s neither coarse nor is it super soft. It reminds me of a dense wool in both appearance and feel.

Recycled plastic turned fabric. What the hey? Well, it seems that you can take PET plastic bottles, grind them up into flecks of plastic, and turn them into an “Eco-fi” polyester that can be used to make apparel — like New Balance shoes. All in all, the NewSKY represents an all around minimal impact approach to a pair of New Balances:

The result, as you can see in the detailed photos above, is (mostly) a heather grey material that reminds me both in look and feel of “felt wool” (like this). The main difference with the Eco-fi polyester is that it has a less universally flexible pliability to it than you get with a natural fabric — or even regular polyester. What does that mean? Well, it’s almost like it creases more like paper or plastic.

It’s a bit hard to describe just how recycled plastic fabric compares to real fabric, but somehow, it’s almost exactly what I’d expect it to be like — almost like you took a plastic bottle and crushed it a thousand times until you eliminate it’s original rigidity. It’d still have something decidedly plastic/rigid about it, but yet it’d be very pliable.

That’s my best stab at describing the plastic-turned-fabric of the NewSKYs. And mind that these recycled uppers are made from approximately 8 recycled PET plastic bottles. Neat.

Of course, you’re now probably wondering how this fabric functions and feels — I’ll go into more on that below. 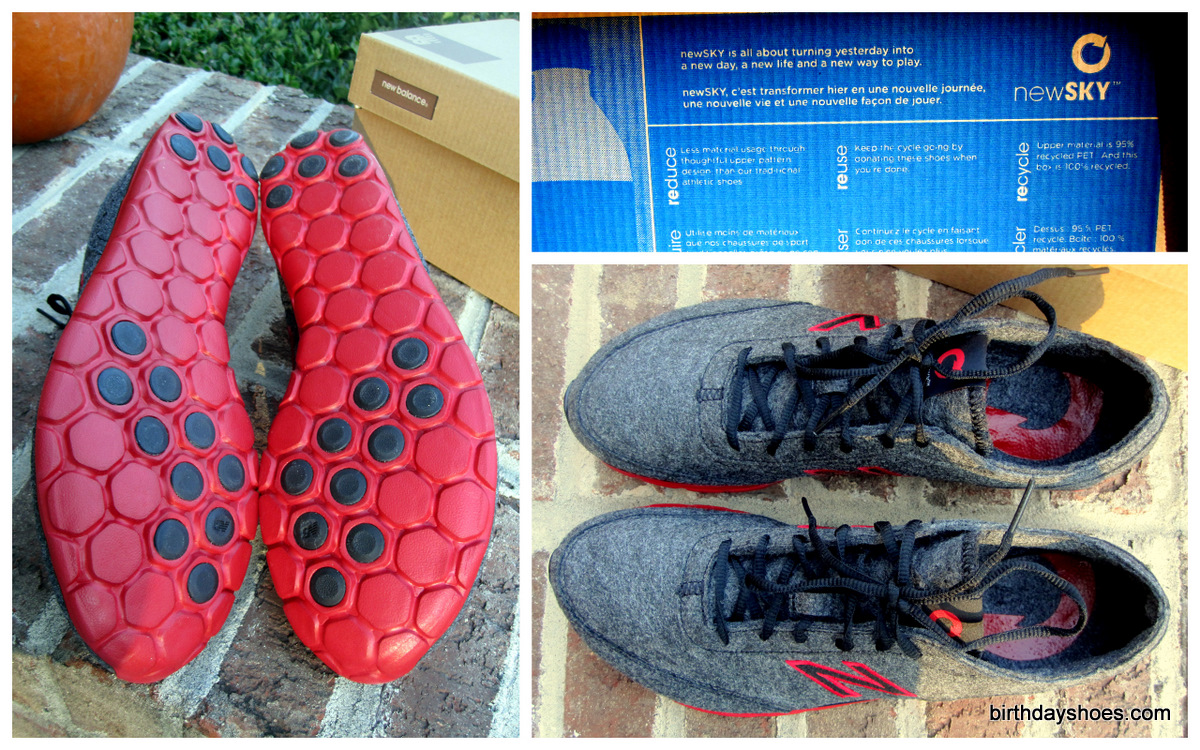 The New Balance NewSKY shoes are partially made from recycled plastic bottles. Plastic fabric for the upper and a foam minimus rubber sole on the bottom.

The New Balance NewSKY shoes utilize the recycled fabric throughout the upper of the shoe. The material is also used for the footbed and the insides of the shoe — there’s no separate liner anywhere in other words. The cut of the shoe isn’t flashy: it’s more traditional and muted, not unlike the grey of the Eco-fi fabric. New Balance uses a splash of color (in my red and grey pair) to accent the “N” on the sides as well as being the base color of the Minimus foam sole. The only real spot of “flare” on the cut of the NewSKY shoes is in the heel where you get these little cutout Xs (see the pics below).

The NewSky is like its Minimus cousin the Life/Wellness in that it uses the same foam-based sole. That sole features a 4mm “drop” from heel to forefoot. My calipers measure the rear of the NewSKY shoes to be about 14mm thick with the forefoot being around 10mm thick. This is exactly the same as the NB Minimus Life/Wellness.

Unlike the Minimus Life/Wellness, the NewSKY employs a traditional lacing system to fit the shoes to your foot.

All of the above is pared with a reasonably wide toe box. My toes do not feel squished or push in at the sides of the NewSKY shoes.

The NewSKY shoe is meant for casual-wear — wear them around town, kick’em for casual play, or take them to a football game. These aren’t running shoes.

They are minimally soled with about a 14mm thick heel and a 10mm thick forefoot. That 4mm differential isn’t much, but it’s enough to be marginally noticeable if you’re in touch with a barefoot style walk. I’ve put a handful of miles walking around in them and like their predecessors (the Minimus Life), the NewSKY doesn’t significantly impair my gait or seem to result in any negative effects down the physiological chain.

Actually, for everyday wear, I’m a big fan of the ounce of plushness you get with the Minimus Life sole — it’s enough to take a bit of the bite out of gravel but not so much as to totally dampen ground feel. Sure you’re not going to feel every pebble like you would with a pair of Soft Star Grippy Roos nor get as much texture as you would with a pair of Vibram FiveFingers — if you’re after that, then the Minimus line across the board (to date) isn’t for you.

Compare the NewSKY to the popular Nike Free line, on the other foot, and well, the Minimus sole is much, much better. Bottom line is that with the NewSKY Minimus sole you’ll feel a strong connection to the ground — not like you’re moonwalking on fluffy marshmallows as with certain other shoes — but it’s muted enough that an errant rock feels like a bump rather than a poke.

But what about that fabric? Do you wear these barefoot? Yes. I’ve been wearing them without socks, all day, including a good deal of walking (including a couple 2+ mile walking sessions). How’s the fabric feel against a bare foot? It reminds me of the Smartwool Classic FiveFingers in texture — there’s a texture to this fabric that is rough. It’s not rough-irritating (all day wear would be impossible if it was irritating), it’s just rough as in not smooth or soft. Also, there’s a lack of seams inside the shoe and the footbed is stuck in place — this is all good for barefoot-wear as the last thing you want is an errant seam to drive your bare foot slowly insane.

The consideration here is whether or not you want to have something soft and smooth against your barefoot because if that’s the case (and you’d wear these sockless), you’re going to want to consider other options as the fabric, as cool as it is from a recycled standpoint, doesn’t feel like cotton or a smooth nylon.

I appreciate the functionality of laces on the NewSKY for custom fitting the shoes to my instep — the lack of laces on the Minimus Life can make for a too-tight fit over the top of the foot for some.

Finally, the polyester seems to breath fine. My feet haven’t gotten hot in the NewSKY. I will point out one design flaw — New Balance put this painted-on recycle-inspired arrow on the footbed at the heel. At times my foot sticks to it briefly. It’s only noticeable sporadically (maybe because I forget about it after a couple steps), but it’s worth mentioning to give you a heads up. 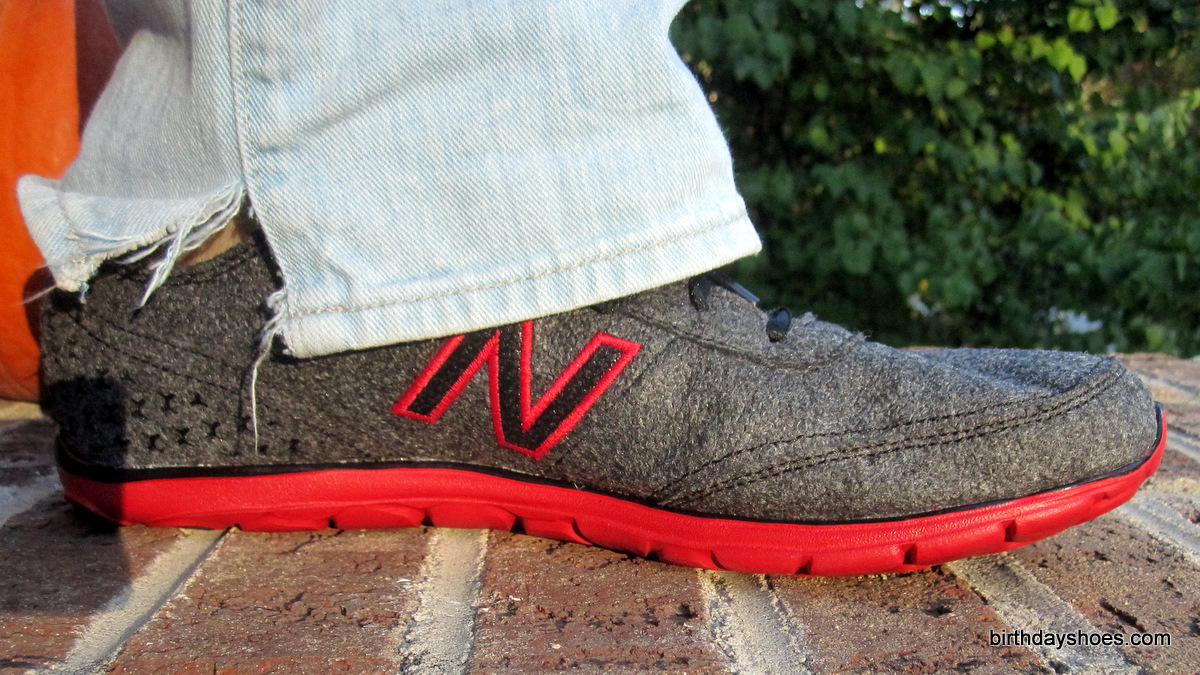 Paired with a pair of cut, bootcut jeans, the gritty, heather or ash grey and bright red accents on my pair of NewSky shoes make for a fairly sharp look.

If you want a pair of Minimus shoes for casual wear and like the idea of buying a shoe that uses recycled materials, the decision to buy or not buy the NewSKY really comes down to aesthetics — do you like the look of them?

And on this question, I’m a bit on the fence.

I like the colorway in my pair as it’s a nice balance between a neutral grey and a splash of red. The prevailing grey of the recycled fabric is something that can be a little hard to pair against a pair of jeans for some reason.

Also, there is something in the stitching/cut of the upper that is decidedly old school or retro to my eye and I’m not sure if I like the older look. Meanwhile, the uber-tapered “bumper” of the Minimus Life sole (the bit you see at the very front of the shoes as with the topmost photo above) is a modern approach to the sole of an athletic shoe, so the mash-up of retro and modern clashes a bit to me. Mrs. BirthdayShoes wasn’t gushing with praise for the look of the NewSKY (she really likes the Minimus Life by comparison), so there’s that, too.

The one other thing about the fabric of the upper from an aeshetic standpoint is how it flexes. It doesn’t really stretch so much as it folds. This is easier seen than explained, so look at this photo (poor lighting, sorry). I’m pushing the front of the sole down to the ground in this shoe (there’s a bit of toe spring in these) and when I do the fabric gets those folds. Anyway, it’s a nit, but this behavior bothers me for some reason.

All in all you might love the look of these — or you might not. I’m still on the fence.

The NewSky shoe is one of New Balance’s “wellness” options – for wear before or after a workout. They aren’t intended as athletic shoes and I have been wearing them mostly for casual, everyday use (walking).

Parting Thoughts, Sizing, and Where to Pick’em Up

I like the New Balance NewSKY. It’s a very cool concept — to reduce material use in the upper and make the upper of the shoe almost entirely from recycled plastic bottles. Given the growth of “green,” I can see how a lot of folks would really rally behind the NewSKY’s design.

And if you dig the aesthetic and want a casual-wear pair of foot-friendly shoes, then you should be sold. Oh and they’re “only” $95 — that’s 95% of the Minimus Life price! Coincidence? Probably. You can pick them up from ShopNewBalance.com here — note I’m not seeing my colorway available at the time of this posting.

And if the NewSKY shoes aren’t quite your thing but you’re after a pair of minimalist shoes for casual wear, I still highly recommend you check out the Minimus Life. These continue to be one of my favorite pairs of shoes some eight months and countless shoes released later.

If I missed anything, let me know in the comments below. What do you think about these New Balances? Lemme know!