What’s the change mean for you or for the usefulness of this review? Well, nothing — they’re still the same shoes, just branded with a different name and logo!

You may remember these shoes from an initial review on a preproduction model from startup company StemLems Shoes back in the summer. We’re going to take a closer look at what has been in the works since then, how the Primals have been tweaked, and what makes them so comfortable. Lems Shoes was first described to me using the David and Goliath analogy. If Vibram is David and Nike is Goliath, then by comparison this is like Leming is David and Vibram is Goliath. To illustrate this point, when first getting a pair of Primals to test, I wasn’t working with a marketing rep, but rather emailing directly with the CEO of the company, Andrew Rademacher. Andrew started the company while searching for a better shoe. For more on Lems Shoes as a company, see the interview Justin put together at the bottom of his first look review. Full review, photos, and a way to save money on them after the jump!

Since they are starting out small, Leming makes just one model of shoe in a few different colors for both men and women. They have the standard zero drop heel that one would expect to find on a pair of minimalist shoes and the sole is so flexible that it rivals some of the early Vibram Five Finger models like the Classics and Sprints. You can quite literally role the shoes up into a ball! They have a wide toebox and the inside is lined and padded with a comfortably textured material that feels great when you slip your feet into them. The uppers are soft and pliable and almost remind me of my favorite pair of slippers. Justin noted that the material on the inside of the tongue can be a bit scratchy and can irritate your skin if you are going barefoot in them, but I found wearing socks takes away any issue that you might experience like that (And Justin agrees!). And what’s new with the Primals since the first look back in May?

So how did they feel? Bottom line: They feel great and are extremely comfortable. The first time I put them on I was extremely impressed with how they felt. Being on my feet in them for long periods of time or simply having them on for hours on end, especially during travel, felt good. I didn’t experience any hotspots or rubbing anywhere and my feet never felt cramped. The flexible sole makes for great ground transmission with what feels like just a bit more protection than some of the thicker soled Vibram FiveFingers. While walking, the uppers are soft and move well with your feet without feeling too flimsy. Once you break into a jog or run though the uppers become a bit wobbly, so you won’t want to use them for athletic pursuits or on unstable surfaces that require side to side movement like when you’re trail hiking. The Primals are fairly breathable and make for a great three season shoe, but if you are prone to cold feet during the colder winter months, you’ll want to make accommodations by wearing thicker socks. Despite having a flexible and soft rubber sole, the tread held up quite well over a few months of use and showed relatively little wear. I did happen to run into a problem with some of the stitching coming loose near the big toe after the first few sessions wearing them, but it never seemed to get much worse than pictured below: 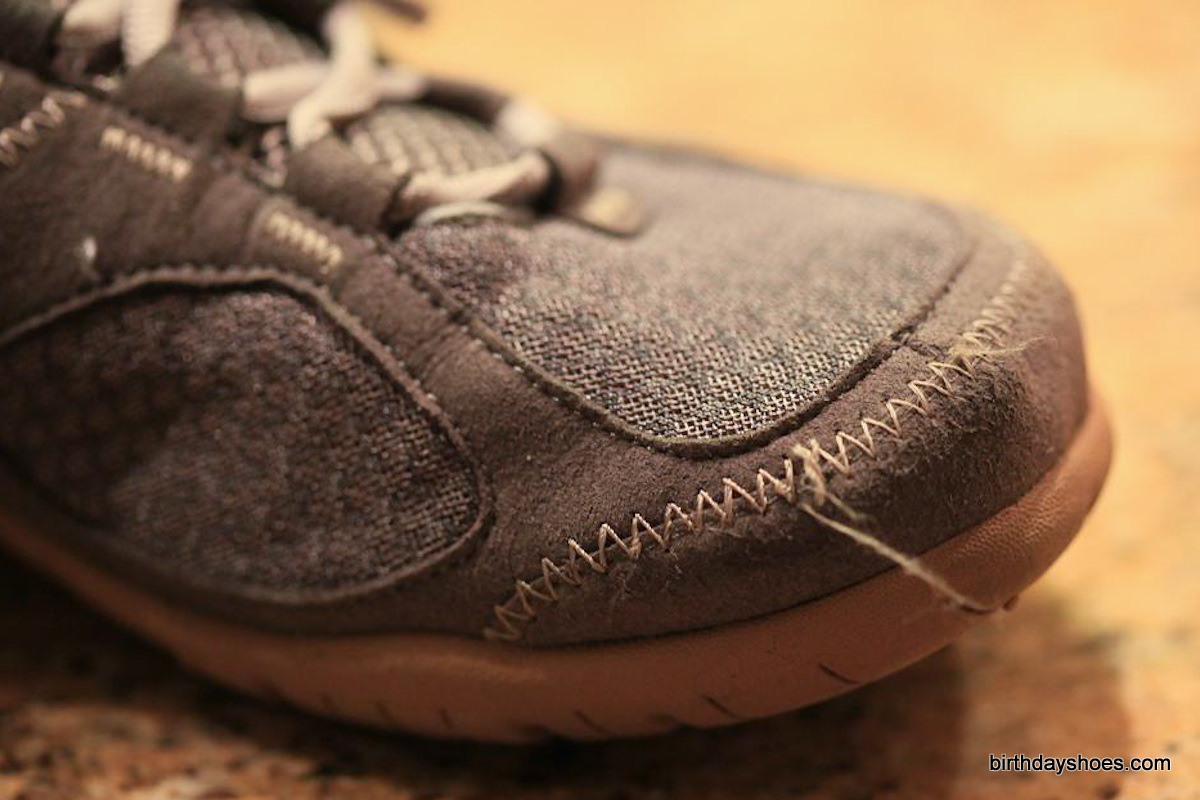 When asked if Leming had gotten this type of feedback from other users, Andrew admitted that they had run into some manufacturing problems on the first run of production shoes but that they expect to have all these issues ironed out on their next run. We were told that Leming will replace all defective shoes with free shipping and give a free return shipping label for the customer to send the defective pair back. It sounds like customer service and word of mouth advertising is important to Lems Shoes and that they really value their early customers and will try to do the right thing in order to make a name for themselves. As for care and washing, the Primals are machine washable (gentle cycle recommend) and should air dry in front of a fan in only a few hours. 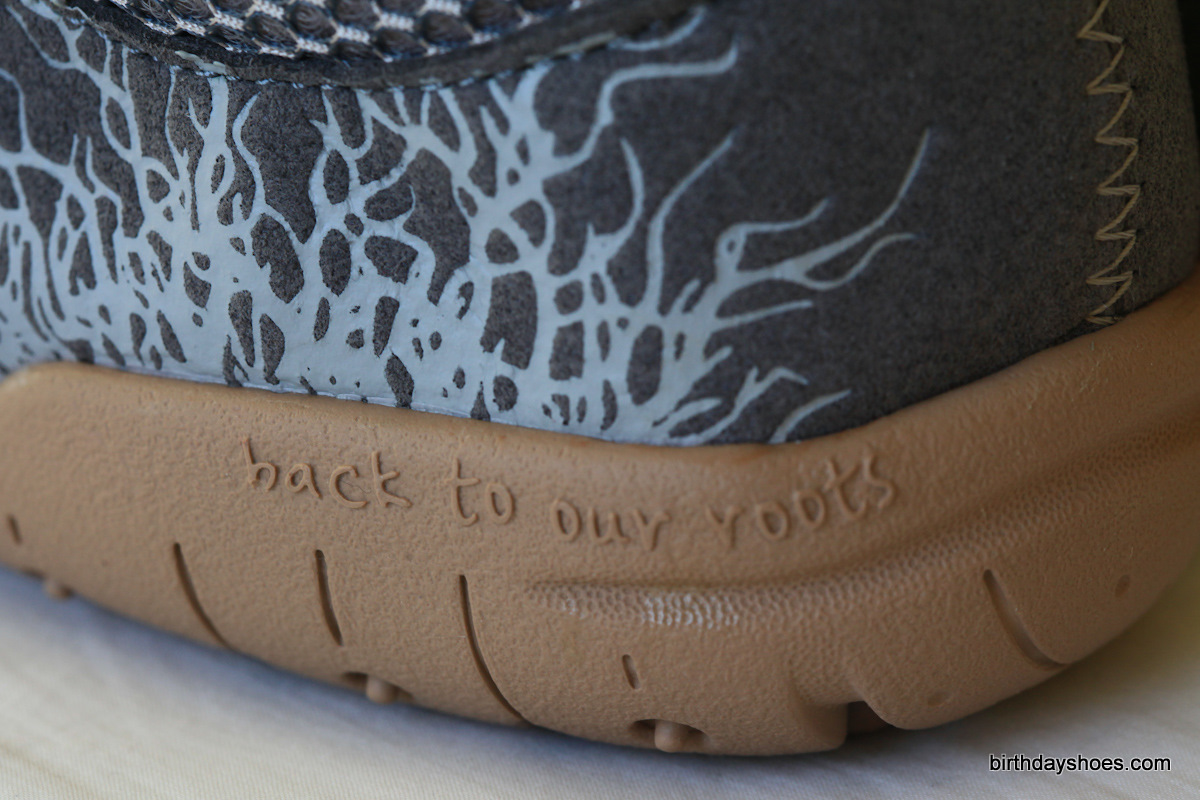 Leming makes three models for men: Moss Green (olive and blue), Slate Grey (reviewed here), and Earth Brown, (brown on brown) and two for women: Frost Grey (grey with a hint of pink) and Earth Brown (same as the men’s.) The company’s tagline is “ancestral footwear” and a few similar slogans such as “primitive performance” and “back to our roots” are stamped on the sole. On the uppers, on the outside of heel, a stylized and textured image of tree roots growing out of sole adds a bit of complimentary coloring and flare without being obnoxiously loud. Sizing can be a little different than expected. Andrew recommends that you go by your US size, not the EU size, because they are sized with US increments. Women’s sizes run different than Men’s. Women will need to go up 1/2 to a FULL size. Men will need to either not go up or go up 1/2 size. After you get your shoes you will see that they are designed for your toes to fit close to the end of the shoe (less than a thumbs width). If you are buying on the Lems Shoes website and can’t decide between two sizes, they recommend you buy both and return the one that doesn’t fit. You do have to pay for the return shipping, but you will be refunded fairly quickly and Allie and Andrew handle all the customer service so they are happy to help however they can.

If sustainability is a consideration for you when purchasing new shoes you’ll be please to learn that as a company Lems Shoes strives to be eco-friendly through their “eco-rule of 50%.” They use vegan materials and a smaller low consumption box that is roughly half the size of company’s other shoe boxes. While this probably helps with shipping costs, it is nice to know that their commitment goes beyond the bottom line. 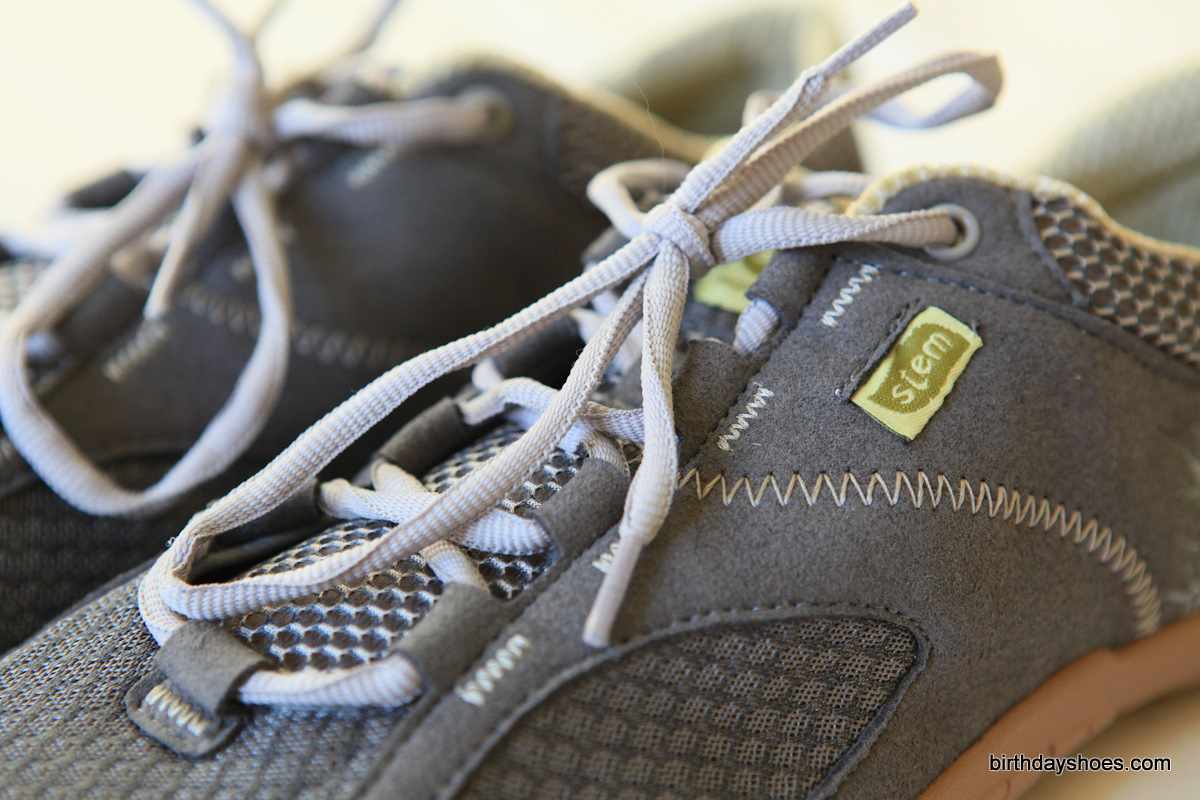 Lems Shoes looks to be a promising startup company, run by attentive owners, with a great product for someone who is looking for a comfortable casual minimalist shoe. Despite a few minor annoyances like a scratchy tongue and some simple manufacturing concerns that should be worked out soon, I would highly recommend checking the Primals out. While there is really only one model currently available in a few different colors, Andrew did clue us in that they are looking to expand in other directions so a colder weather or waterproof shoe might not be too farfetched of an idea for the future. Personally, I’d love to see a dress shoe option or something that could be worn with a suit from Leming as I think they’d be perfect to wear around the office. At $95, the Primals fall right in line with other comparable minimalist shoes and they can be ordered online from the Lemingfootwear.com with domestic and international shipping. At the time of writing there are also about 50 brick and mortar shoe stores scattered around the U.S. that now carry them. While these stores are mostly concentrated on the East Coast, Leming hopes to focus its attention and expand to more retailers on the West Coast in the coming months.