The Vibram FiveFingers Spyridon LS is a new Vibram FiveFingers model specifically built for trail running. It’s named after Spyridon Louis, the Greek shepherd who won the first modern-day marathon in the 1896 Athens Olympics. The course was run on dirt roads which is where these FiveFingers were meant to be worn — on the trails. Since I’m big into trail running I was stoked to try out a pair of FiveFingers specifically built for just that. Full review, photos, and release date giveaway details after the jump! 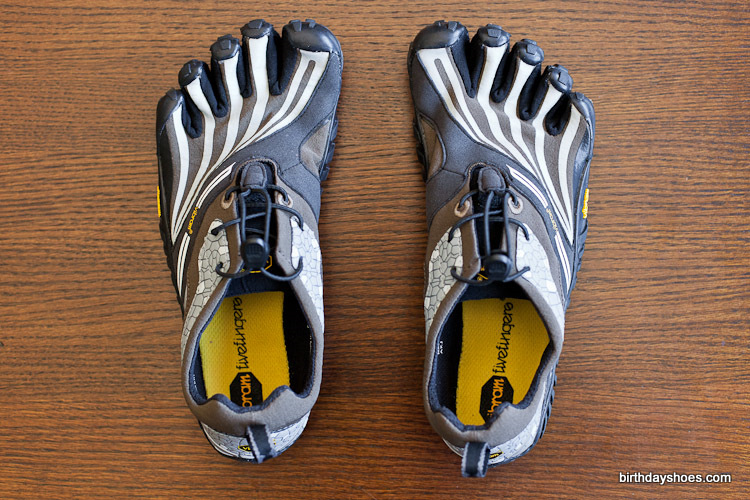 These are some tough Vibrams. With such an aggressive tread pattern, these things look like they mean business. My pair are a military green and gray mix with a lugged outsole that closely resembles that of a mountain bike tire. There’s a contrasting white lined pattern on the top, a black and white beehive pattern on the sides, and a smooth raised gray overlay that runs around the back of the heel that gives it some structure. There’s a lot to look at, but somehow all those designs work well together.

Here’s the official press release of the specs:

A minimalist 3.5mm Vibram rubber sole provides impact protection from stones and debris, while allowing proper barefoot dynamics. The aggressive tread design delivers sure-footed grip in all directions, and molded polyester mesh in midsole adds a “rock block” effect, dispersing impact over a broader area. A Coconut Active Carbon upper offers natural breathability and an adjustable hook-and-loop closure ensures a secure fit. Reflective applications are applied for safety after dark. Available in dark olive/black/orange and military green/grey/black for men and orange/grey and military green/grey/black for women, with an MSRP of $120. 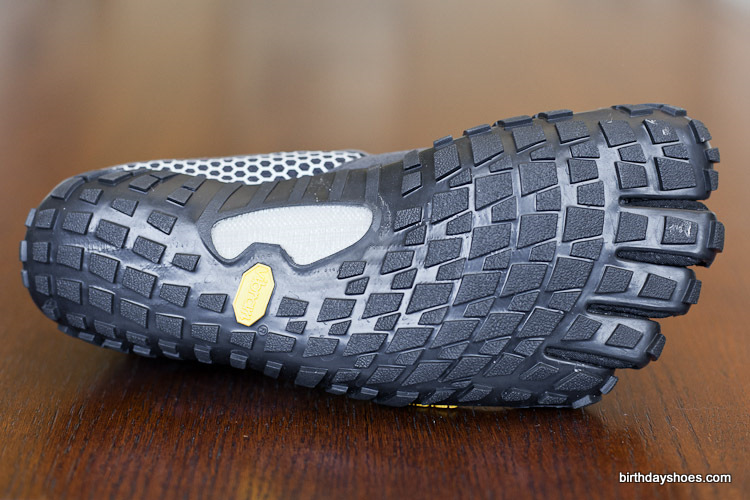 Sole/Tread: The 3.5mm Vibram rubber sole has a segmented rectangular pattern that allows you to have a greater range of motion. A molded polyester mesh is added in the midsole (called 3D Cacoon technology) for stone puncture protection while reducing weight. This disperses the impact over a broader area rather than letting it stick into the shoe. You can see it through the “window” on the bottom of the sole. 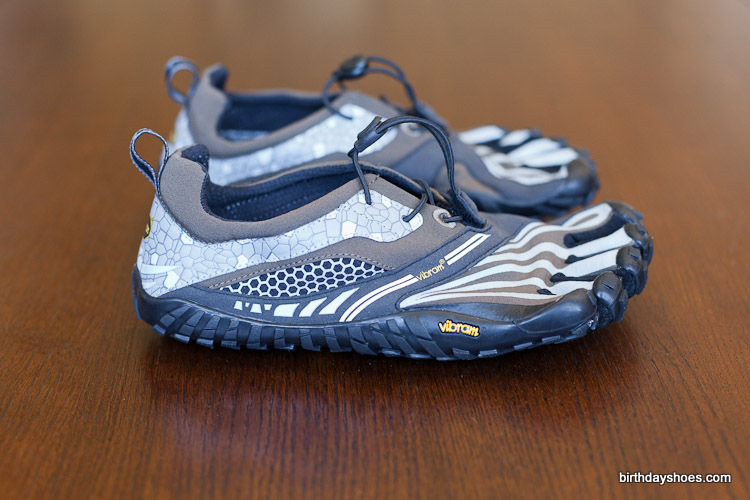 Upper: The upper is made of Coconut Active Carbon and is a little more robust than an average VFF upper to protect your feet from dirt and debris. The area with the beehive pattern on the back of the heel has a little bit of perforation for ventilation. Closure: The laces on these are the perfect length (not too long) and are easy to adjust. They are noticeably shorter than the laces on the KomodoSport LS. They are made of some sort of memory wire so they always stay in position and don’t hang like a regular shoe lace. Footbed: This model does not have a removable footbed. The insole is stitched-in polyurethane. Weight: My size 38 weighs in at 4.9oz each (9.8oz a pair) Washing: I threw them in the washing machine and they came out perfectly clean. Dyring Tip: I put them in front of a fan to dry them quicker … works perfect every time!

The 38 fits me true to size. The tongue is soft and gives lots of cushioning to the top of the foot. The upper is noticeably thicker than an average pair of FiveFingers to protect your feet from rocks and trail debris. I can definitely tell that it’s thicker too. It’s comfortable, but it doesn’t feel as porous or well ventilated as some other FiveFingers do. Even without a footbed, the stitched-in insole is comfortable, but the interior feels a little more slick and smoother than a Vibram with the typical soft lining. I had some problems with the inside of the heel. There’s a seam running down the inside of the back of the heel that caused small blisters on both feet. (See this photo for the exact point). It gave me a lot of sharp pain on the first two or three runs. It was so unbearable that it forced me to walk the last bit of my runs back home. I was determined to break them in so I let my feet heal, gave them another shot, and I haven’t had any more problems with it since. I can still feel the seam in there though… it can be a little irritating at times, but I haven’t had any more blisters from it. I’ve also had some issues with the left foot. Halfway through every run, the outside edge of my pinky toe always gets sore. A small blister formed and now I’m starting to build up a little callus there which has helped stop the pain. I haven’t experienced this with my right foot though—only the left. I inspected the shoe and can’t figure out what’s causing it. I’ve also had a blister form on the inner part of my left foot when I first started wearing them. I noticed that there are some seams and raised surfaces in that part of the shoe, but it doesn’t explain why it only happens on one foot. My left foot is smaller than my right, so it’s not a fit issue. Maybe it’s because the interior isn’t as soft and forgiving as other Vibram toe shoes or it could just be chalked up to a pre-production issue.

I’m an avid trail runner so I couldn’t wait to take the Spyridons for a spin. I’ve been running in them about three times a week for three to five miles each time. I ran on a single track dirt trail with lots of big hills, rocks, switchbacks, snakes, mountain bikers … you name it. So how’s this new tread? Absolutely amazing! Not only does it look like a mountain bike tire, but it feels a little like I’m wearing one on my foot. The lugs grip the ground really well and provide lots of traction on steep hills. What’s most surprising about the tread is how flexible it feels despite how thick and robust it is. I feel extremely agile and can traverse all kinds of terrain with more freedom of movement. When comparing the tread on the Spyridons and the KomodoSports, I get a greater range of motion with the new multiplied lugged pattern whereas the KomodoSports feels more rigid throughout the entire sole. I also get pretty decent dexterity and ground feel considering the thickness of the tread. Also, a huge win for these VFFs is that I’ve had noticeably less pain from running over the occasional sharp rock. The mesh layer added in the midsole is meant to disperse impact and it seems to be doing it’s job! Mud: I tested them on the trail after it rained to see how they would hold up to muddy conditions. As expected, the tread ended up getting completely caked in mud like any shoe would (see the photo). But for the most part, the aggressive tread helped minimize slippage and I was able to do my entire run. 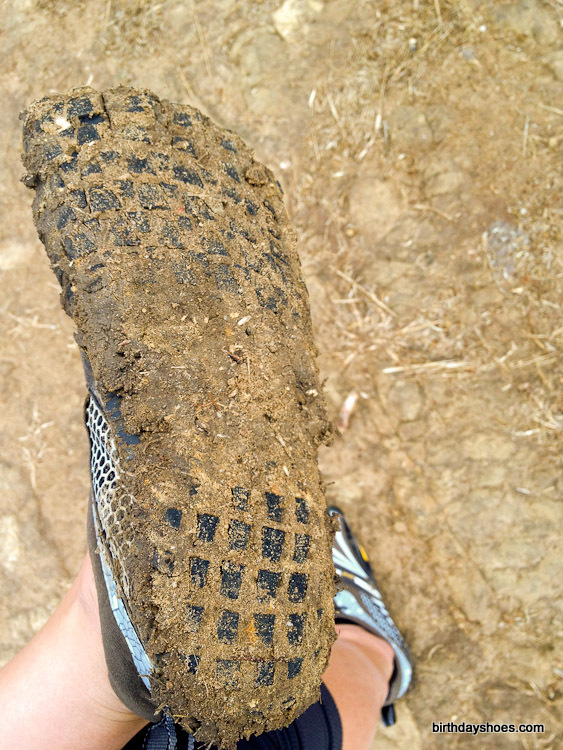 I’m sold! Even though they caused me a little bit of pain, I’m willing to keep working with them to break them in even more. As a regular trail runner, the tire-like tread makes a big difference to me. I get a lot more flexibility throughout the entire foot while having noticeably less pain from stomping on rocks. I’m stoked to see Vibram experimenting with new designs and creating a VFF that is specifically meant for trail running. I can’t wait to see where they go with this tread pattern on future VFFs. Pros Cons Be sure to check out Tim’s big showdown between the KSO Trek FiveFingers and the Spyridon LS in his KSO Trek vs. Spyridon LS review.

Good news! I received a final production model of the Spyridons to test and I didn’t have the issues I had with the other pair. The problems I encountered could just be chalked up to pre-production issues. These red/gray pair perform the same, but have slight differences in the construction. Here’s what I found… The pain on my left pinky toe magically disappeared. After checking it out, I noticed that the seam is not as bulky inside of the pinky toe pocket. This makes me think it was probably just a pre-production issue. Also, the seam on the back of the heel is nowhere near as irritating and hasn’t caused any blisters. Although, when I take them off after running the trail for 45 minutes, I have red marks on the back of my heels from the thickness of the seam. It’s not painful, it’s just a little red… not sure how this would effect my skin on a much longer run. Another thing to note is that the laces are shorter in the red pair. They don’t leave a lot of room for adjustment (you can see this in the photo), but I don’t mind it since I don’t need a lot of extra slack. Also, the gray rubber sole (not the tread) seems to be a little more rigid and robust in the red pair. It feels a tiny bit thicker when I bend it. It’s also slightly textured whereas the black sole is completely smooth. You can see the difference in the comparison photos. This difference is negligible as I didn’t notice a change whatsoever in performance. I get the same great flexibility, agility, and protection from rocks. Again, I’m in love with the Spyridons. They’re my go-to trail running VFF. Hopefully they will fit similar to the red/gray pair once they hit the stores and be free from the issues that I initially had with the pre-production versions. If you get a pair for yourself I’d love to know what you think about them!

Justin here. The Spyridon LS were first released on 2/10/2012! They retail for $120 and size similarly to the Bikila though as with all FiveFingers, sizing is pretty unique to each fan. Go with your gut. If you like online shopping, we recommend ordering the FiveFingers Spyridon LS from a retailer with a strong track record of standing by customer service and having a solid inventory at reasonable prices. Mind, since the Spyridon LS is a brand new FiveFingers model, you’re not going to find it anywhere on sale. That said, you shouldn’t have any problem finding it with free shipping. Here are a couple retailers you might check out first — If neither of those have your size and colorway in stock, hop over to the BirthdayShoes Store to find other legit (not fakes!) retailers who might be carrying the SeeYa FiveFingers!

I live in southern California and write a [url=http://velokova.com]creative lifestyle blog about adventure, travel, and photography[/url]. I interview inspiring women and feature travel tips such as how to pack a backpack. I can’t live without avocados, standup paddling, mountain biking, and cameras.