Before I even I started writing for BirthdayShoes, I?d been searching for a pair of minimalist dress shoes to wear for work. I’ve had a couple good options from VivoBarefoot that I can wear on casual Fridays, but I’ve been waiting for someone to come along and create a truly minimalist dress, complete with zero drop heel and a nice thin sole. And then came along Tune Footwear! Funny story—I and was out grabbing lunch when I randomly bumped into a guy named Mike Norris who commented on the Skora running shoes I was wearing at the time and had reviewed on the site a few days earlier. We got to talking and I learned that he was in the middle of a starting a minimalist dress shoe company. At the time, the only prototype shoes that he had were the ones he was wearing on his feet. Fast forward a month or two for a preliminary look at Mike’s vision, and a few more months after that and we finally had a couple pairs to play with. Justin reviewed a first look of the tassel loafers and I’ve been putting the penny loafers through their pacers over the past 6 weeks or so. So let’s dive into the review! 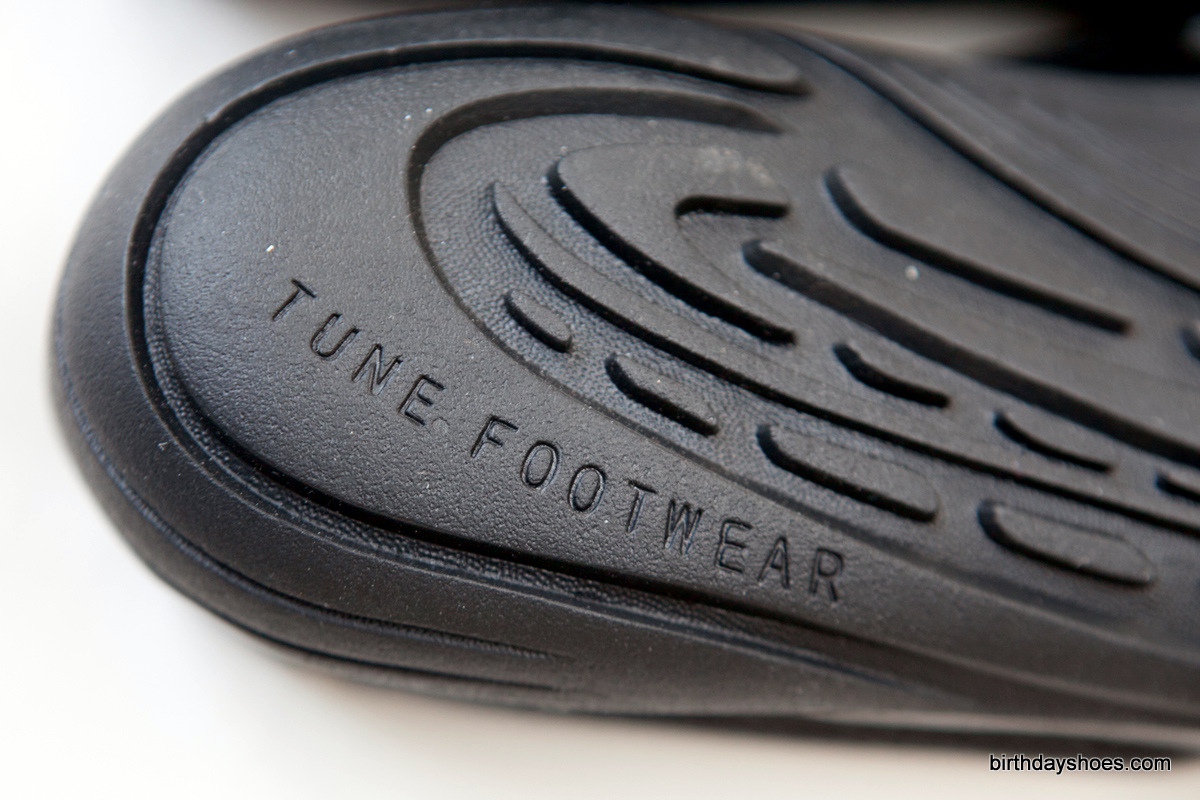 Tune uses the same sole across four different models of shoe. They current make a Penny, Tassel, and Ornament loafer as well as a Boat shoe. The loafers all come in three different colorways (brown, black and a lighter tan) and the boat shoes come in one color of tan. All models come in half sizes between 8 and 13.5. The shoes reviewed here are the Penny loafers in tan and in black. The sole is made of a soft 8mm thick rubber and has a zero drop heel. The bottom of the sole has stylized lugs in the pattern of the company logo. The shoes have fine traction around the office, along the sidewalk when you’re grabbing lunch, and even can work sufficiently if you forget your regular pair of running shoes for your evening workout. (more on that below!!) The upper is made of soft leather (full grain, pebbled and new buck, depending on which model you go for) and has a 5mm thick insole. The toe box has ample width, without being obnoxiously wide or looking like clown shoes. Thick stitching runs along the rim at the front of the shoe, while thinner stitching runs along the sides and heel. The panels inside the shoe are smoothly joined and are comfortable, and while I’m a socks with shoes guy, I expect these loafers to be comfortable going barefoot in them as well. The tongue even has room to add the traditional penny, if one prefers to make that kind of fashion statement.

The shoes in photos

When first slipping them on, the area below the tongue across the top of the foot feels always feels a bit tight to me. This feeling quickly goes away after 30 seconds of walking in them. The toebox is plenty wide with lots of room to wiggle your toes. The soft rubber sole and supple leather upper allow for plenty of dorsiflexion. The heel cup fits well, doesn’t let your foot slide at all, and is especially comfortable on the Achilles tendon. It’s hard to explain in words, but there isn’t much structure to the loafers along the instep and outside of the foot between the heel and the tongue so the shoes appear to bow outwards. This isn’t actually an issue when you’re wearing the shoes, but it does seem to appear a bit odd when they’re off the foot (See this photo). 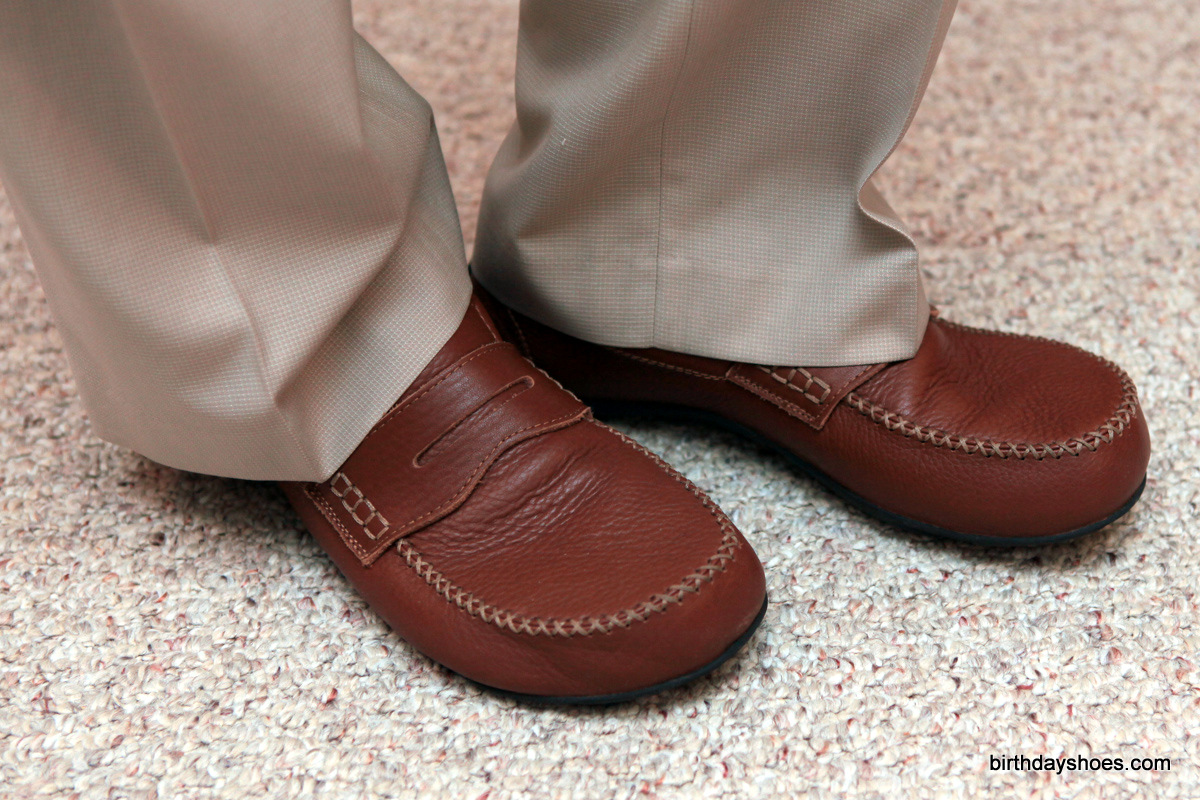 Despite having a total thickness of 13mm between your feet and the ground, it feels like much less. These shoes have an awesome ground feel which surprisingly rivals some of the more minimalist Vibram FiveFingers I’ve worn. They certainly have greater ground transmission than any of the Trek LS sole based VFFs like the Lontra or Speed XC. I’d compare the ground feel to a broken-in pair of classic soled VFFs like the KSO or Sprint and they even come close to a pair of Bikilas or SeeYas! The one issue I found with such a thin sole is that there isn’t much protection in the winter from the cold ground and simply by the nature of the style of loafers, the uppers don’t provide much insulation either. Wearing these in December and January in the mid-Atlantic, I found my toes getting cold easily when spending time outdoors. On the flip side, leather is not a material known for is breathing qualities, so when my feet got hot they would overheat and get sweaty, and stay sweaty. I’m such a princess, right? 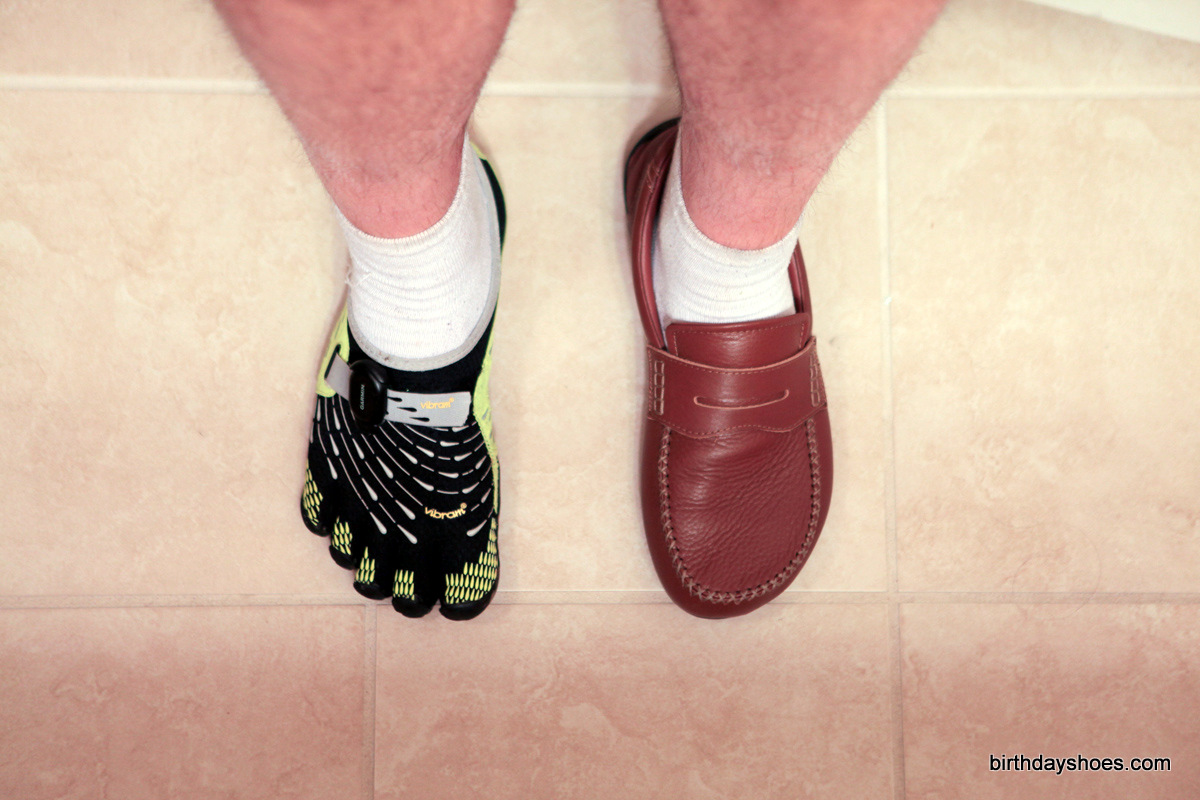 Left, a pair of SeeYa FiveFingers; right, the Tune Footwear Penny Loafer. Ready for a dual-shoe test run!
I was impressed at just how comfortable the Tune sole was, so I decided to take the loafers out for a spin on the local running trail. While the uppers don’t fit as snuggly as most running shoes I prefer, they definitely worked out okay for a couple miles. I wouldn’t want to run downhill, or play a sport like Ultimate Frisbee which requires a lot of lateral cuts back and forth in them, but for a casual run they were fine. I’d guess that you could even get in a heavy squat or deadlift workout in them at the gym and besides the funny looks you might get, they’d hold up just fine. Actually, they probably would be preferable over a pair of over-cushioned sneakers when it comes to heavy lifting!

All four Tune Footwear models are priced competitively at $99. This is right at, or even well below, the price point for many men’s department store or designer dress shoes available. While I’m sure you could find loafer style shoes at bargain stores, you certainly wouldn?t be getting one of the first to market minimalist dress shoes. Currently the shoes are only available for purchase from the company website but plans are to expand into retail shops across the county as soon as opportunities become available. Shipping is $10 and returns are free within the U.S. and are made easy on their website. So, should you get a pair? I’d say yes, definitely pick up a pair if you like classic styling and want a pair of minimalist shoes with great ground feel to wear around the office. These are now my go-to pairs of dress shoes and I’m excited to see how Tune does and if they’ll continue to expand their model lineup. Regarding my nitpicks with temperature, it’s a minor issue, but if you always have super sweaty or super cold feet, maybe you should think about a different style of dress shoe than a loafer. And remember, if you are just jumping into minimalist shoes of any kind without any break in period for your legs, you might experience some soreness, even if it just for wearing them for 8 hours a day around the cubical. You’ll definitely want to ease into things if you don’t already use minimalist shoes for running or regular casual wear. Lastly, you can also connect with Tune Footwear on Twitter and Facebook. You’ll want to stay in the loop with them because Mike Norris has some fun stuff coming down the pipeline in 2013 for Tune–including rolling out an ambassador program and a series of road running races that he plans to compete in while wear loafers and a full business suit!