Ellyn (Who has previously been seen mini-golfin’ here) sent in the above photos taken on a “VFF Road Trip” with her sister. Ellyn wrote:
This summer my sister and I took a Roller Coaster Road Trip from Wisconsin to Six Flags Great Adventure in New Jersey, Hershey Park in Pennsylvania, and Cedar Point in Ohio. We also spent an evening in Atlantic City to stroll down by the beach. We wore our VFF Classics at the parks each day and ended up with some pretty awesome VFF tan lines! We got so many comments and questions about our shoes that we created a little business card with information that we could hand out to people in the future. They come in very handy and have helped to make a few VFF converts!

Ellyn sent in an image of the aforementioned card: 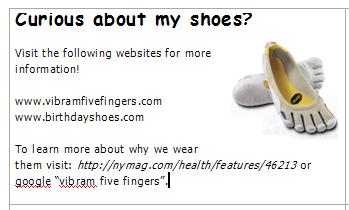 Many folks in the Five Fingers fan community have considered making a card to pass on to inquiring minds. Looks like Ellyn actually put one together!

Looks like you two had a good time on the road!