Merrell Barefoot is bringing to market an incredible minimalist/barefoot shoe in 2013. It’s called the Vapor Glove and when I first pulled the sample pair out of the box Merrell sent me, I thought “Whoa” followed immediately by “Finally!” Quite simply, the Vapor Glove is the most minimalist, closest to barefoot shoe that Merrell has made. Like other Merrell Barefoots before it, it features a Vibram rubber sole and a distinctly “Merrell” look. But looks might not tell just how simple a shoe the Vapor Glove is. If you’re a fan of the KSO FiveFingers but could do without the toes, you are in luck. And you should read on for photos and video of what could be the most compelling-yet-simple barefoot shoes in 2013. 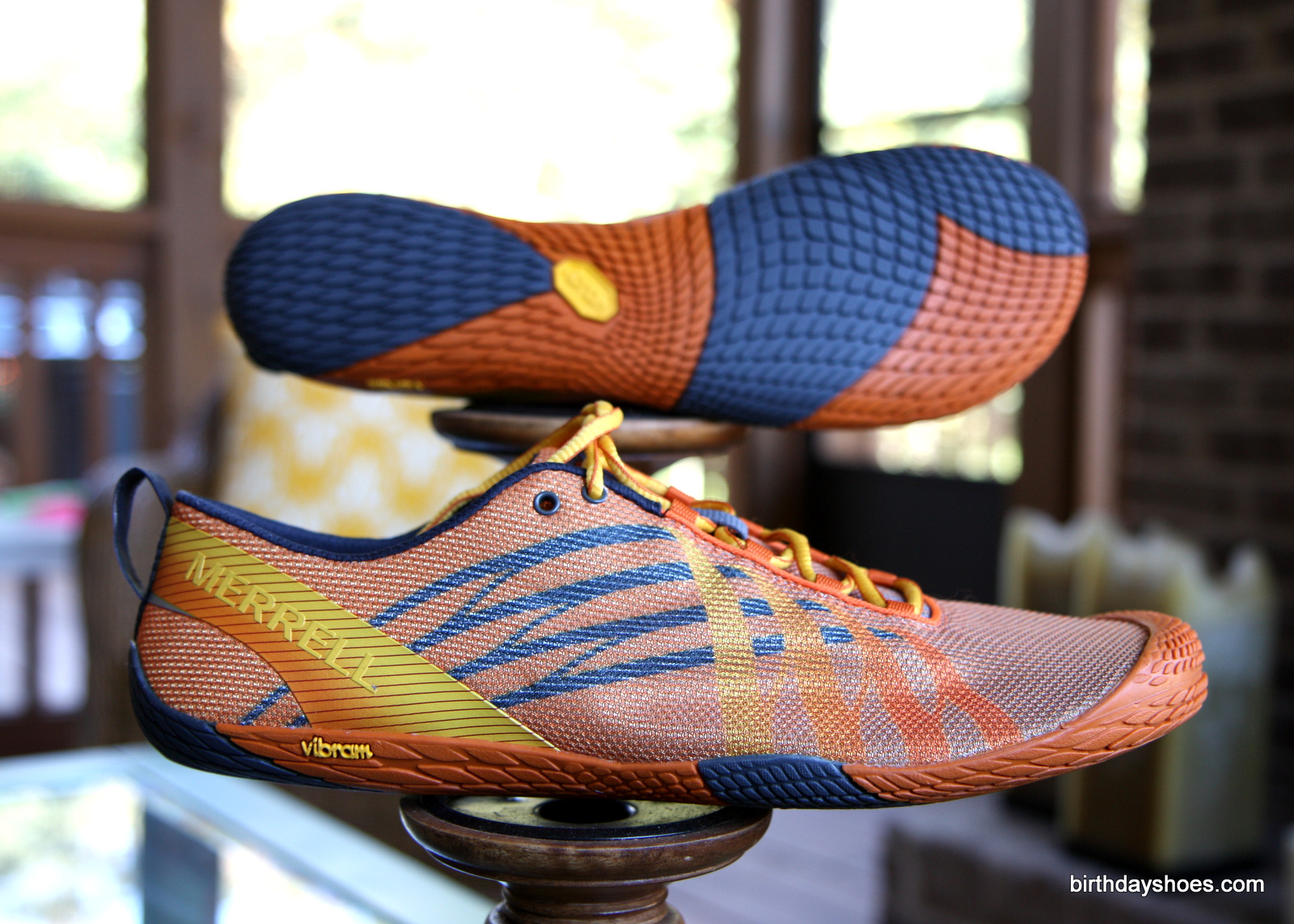 The Vapor Glove is a 3.5 mm Vibram rubber outsole, a 2mm EVA midsole, and a laced, super airy and thin flexible upper. They’re incredibly flexible and lightweight. They have a distinct rubber toe bumper that lends structure to the front of the shoes while protecting the toes, giving them something to push on and lift the front of the shoes when dorsiflexing. Take a look around the shoes: Like other Merrell Barefoots, the Vapor Gloves have a familar “sling” that wraps around the heel. This adds just a bit more structure to the shoes, I suppose. They also have a useful heel tab to make it easier to put them on. Laces are quick to tigthen or loosen, which is another Merrell feature I’ve come to appreciate.

As noted above, the Vapor Glove has a 3.5mm Vibram outsole and a 2mm EVA midsole. Any FiveFingers fans find that familiar? That’s precisely the sole structure of the venerable KSO FiveFingers. Obviously, the Vapor Gloves aren’t toe shoes like Vibrams, but otherwise, the Vapors and the KSOs have a lot in common. One difference in the Vapor Glove sole is that it features an intricate diamond cut that givesv the sole more flexibility. Dorisflexing with the Vapor Gloves is a piece of cake. Also, thanks to the lack of structure in the soles, I suspect these will work very well for those with wider feet. The soles shoulds simple lay down flat for wider feet. One of the great things about Vibram FiveFingers is how they almost hug the foot like a second skin. Most VFF models have so little structure in their soles that you almost forget the shoes are there. Well, not a lot of non-FiveFingers have pulled off this design feat. However, the Vapor Gloves feel very close to the same. In other words, if you want to have a shoe on but sorta forget you have a shoe on, you’re probably going to want to try these out. You’ll note that the soles have foot-like curves to them at the heel, midfoot, and arch. None of these are structural, so unlike, say, the Trail Gloves, you don’t feel much if any narrowing of the last at the arch. Again, the Vapor Gloves are akin to FiveFingers KSOs in that the soles are super flexible and shaped to hug the foot (but not to provide support). Meanwhile, ground feel is very, very good with the Vapor Gloves. Textures are readily felt through the soles. Whichever side designed these soles — Merrell or Vibram — my hats off to you. While I am often unsure just how well photos showing a rolled up shoe or a shoe with a bent sole capture a soles dynamic flexibility (or lack thereof), these in-hand squeeze and roll tests are worth sharing. And note how I rolled up a Vapor Glove and just stuck it inside the other shoe: 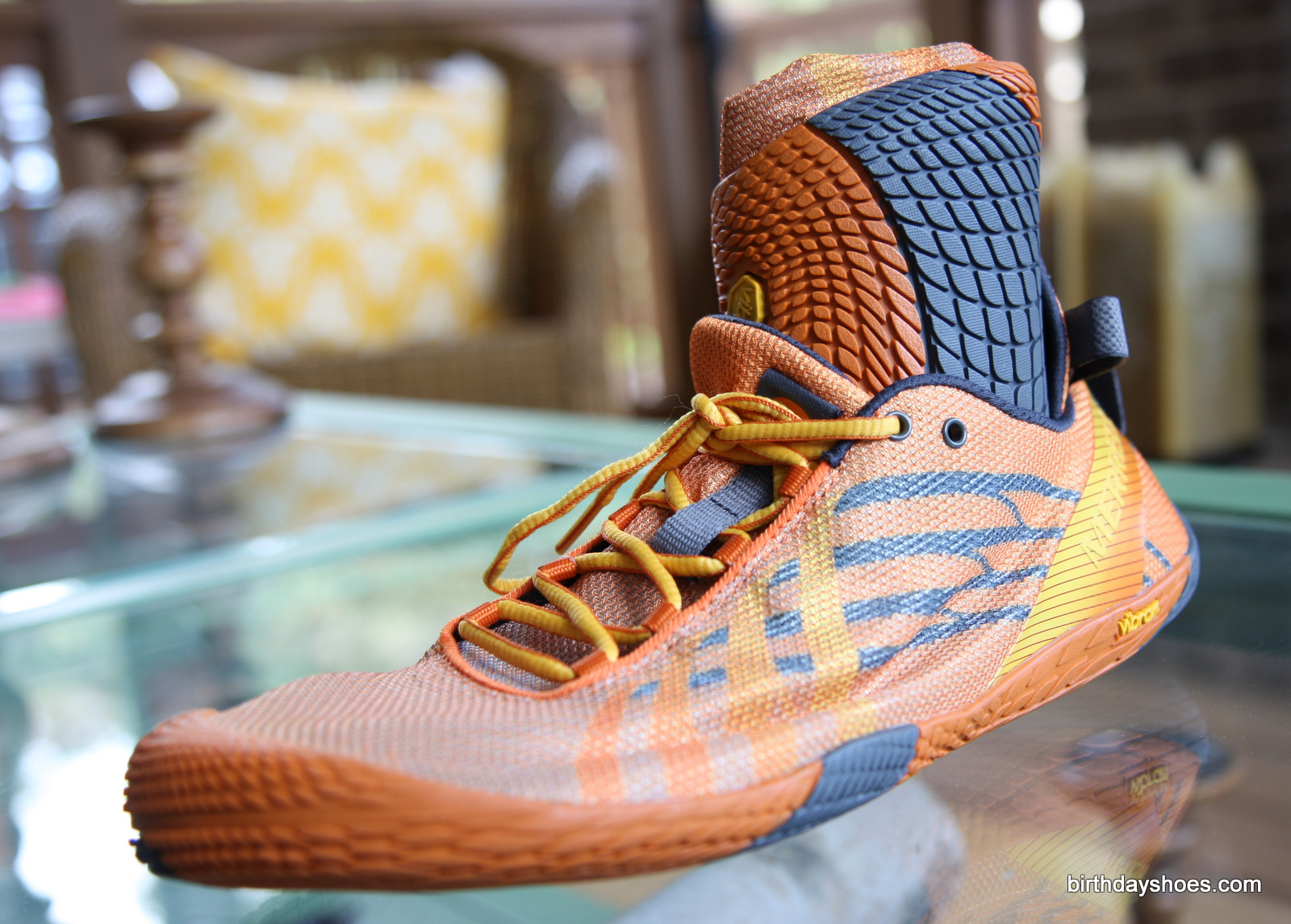 I do have two nitpicking critiques of the soles. One is that the bumper carries on a grippy texture to it that made the front of the shoes (the rounded bumper that wraps the toes) want to grab surfaces like carpet. It never tripped me up, but it did surprise me when it happened from time to time. 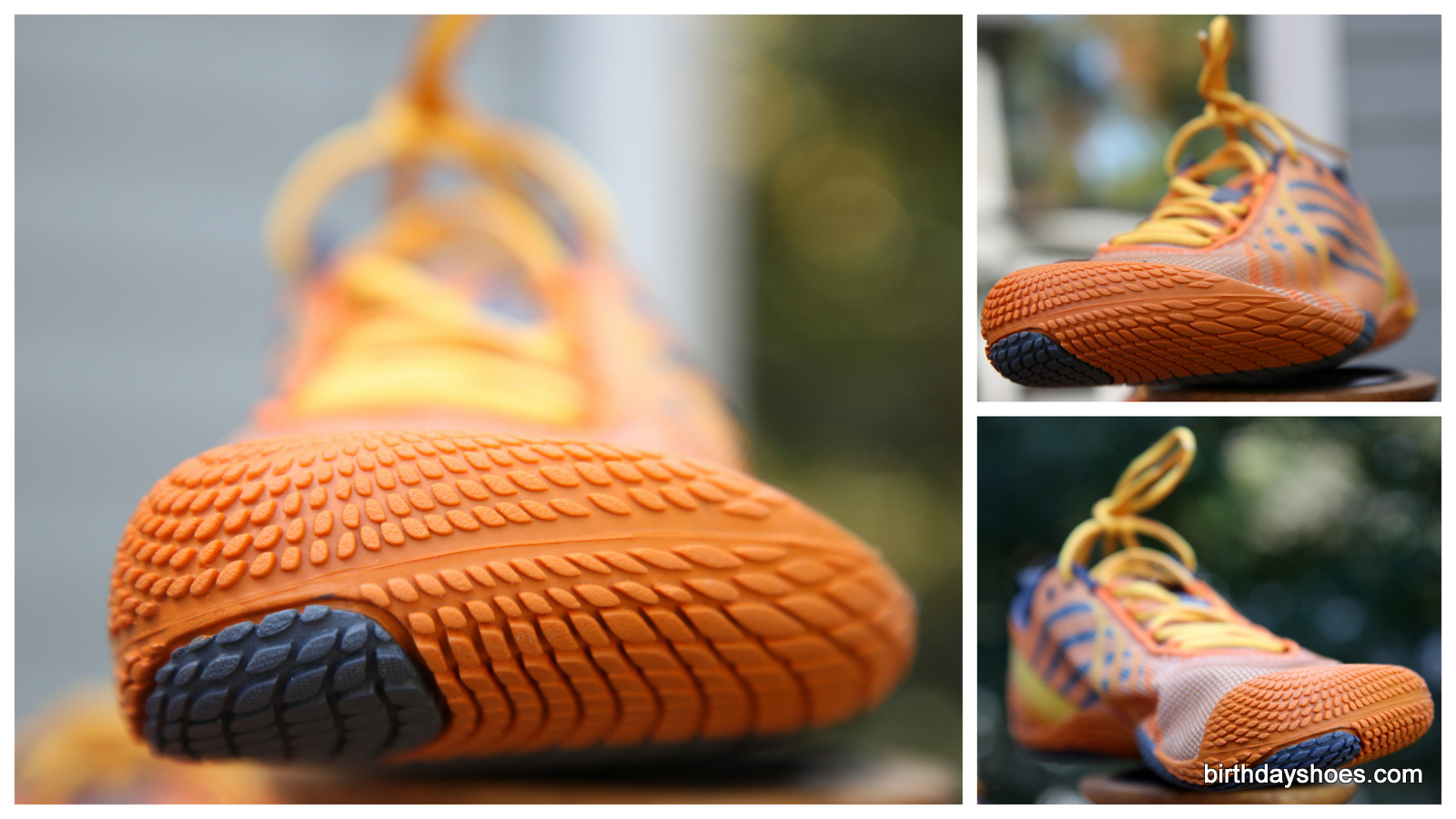 Two, and perhaps more importantly, I would have liked to see the soles wrap up either side of the foot at either side of the forefoot just a little more. This would allow for a bit more protection of the upper (and also more sole to flatten out for expanding and/or wide feet). Ultimately, these are nits and don’t do anything to taint my overall take on the soles of the Vapor Glove. They are fantastic.

The uppper and inside 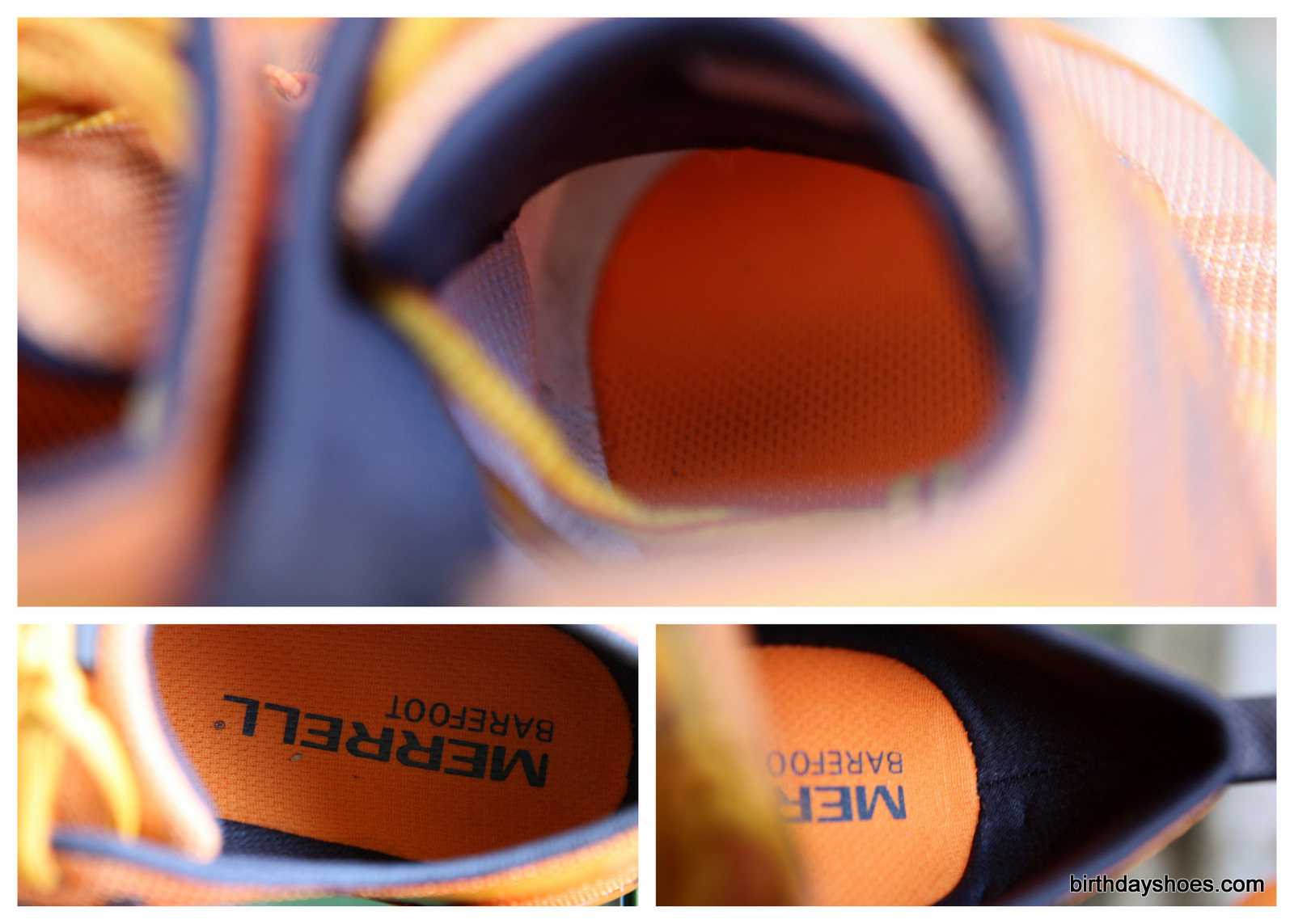 Vapor Gloves have a very simple upper composed of primarily one layer of very breathable, super flexible fabric. Lookswise it has a techy quality to it, but function-wise it’s flexible and soft like a well worn lightweight cotton t-shirt. The tongue and heel of the Vapor Gloves have a secondary layer of fabric, which lends the shoe a little more structure, but this layer is also quite thin. A cool breeze will blow right through the shoes, which will make them great for warmer wear. Winter, on the other hand, probably not so much. The fit with the laces and the soft upper is very comfortably snug. As for the insides of the Vapors, they are seamless and the Vapor Gloves are clearly built to be worn barefooted (though you could wear socks in them if you wanted). Make sure you take a look at the photo of the inside of the toe box. Note the orange footbed doesn’t really capture the full width of the shoe, which goes out to the white/grey sidewalls. 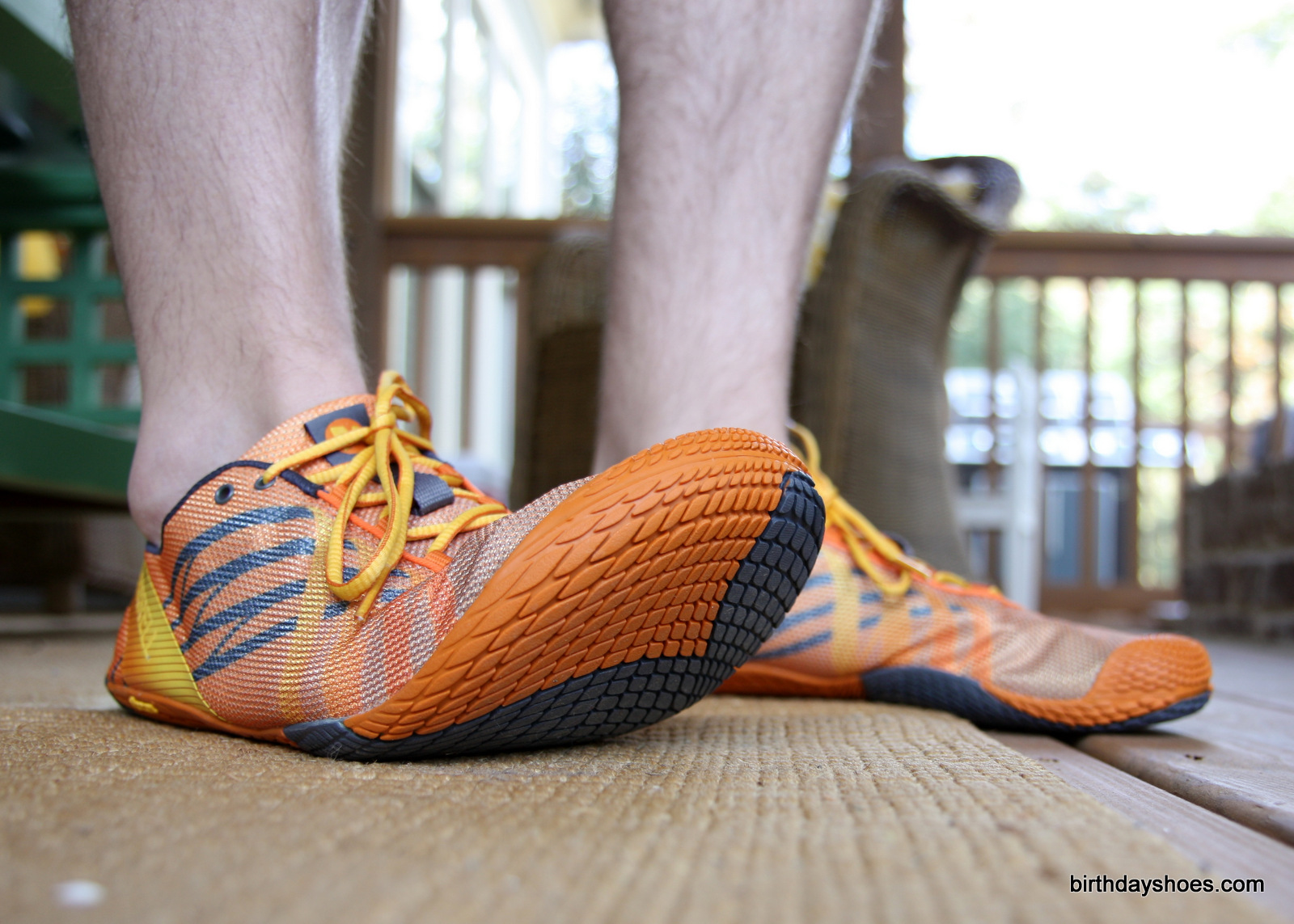 You probably thought I was done talking about the Vapor Glove soles, but some photos of the shoes on-foot do the best job telling the story of the shoe’s flexibility. Dorsiflexing my toes is a breeze, standing on my toes is easy and feels unrestrained, putting weight on the shoes collapses and flattens the soles, etc. These shoes don’t get in the way of my feet. I forget they are there. Actually, they make me feel like so many other minimalist shoes with more involved soles are ultimately a bit too distracting/disconnecting for my feet. Check this photo gallery of the Vapor Gloves on foot and see just how flexible they are:

The Vapors are geared towards runners (probably more road than trail) and fitness enthusiasts. I’ve not put them through running paces at this time other than a few sprints. No surprises or complaints. Again, the Vapor Gloves are like Merrell’s non-toed FiveFingers, so the experience is somewhat similar. With almost no cushioning, you have to pay attention to your steps. Biomechanics feel similar to being actually barefoot for walking around, jumping, landing (be careful falling a few feet not to pound your heels!), etc. The soles make for a grippy experience. I happened to wear them on a boat for a coastal fishing trip this past weekend off of Charleston and felt incredibly sure-footed on a very wet and bumpy boat ride (Thanks Hurricane Sandy!). This was a pleasant surprise. Though this can only be called an initial review given the limits of my field testing (more to come on that), the Vapors show a lot of promise if you’re after a shod experience that gets you close-to-barefoot. Just as all barefoot shoes mute the sensational friction and dust-particle-driven experience of being actually barefoot, so will the Vapor Gloves keep your feet assuredly not barefoot. What they will do is make you keenly aware of what you’re stepping on, what surfaces you’re walking/running on, etc. It’s not barefoot, but for a shoe with an incredibly durable rubber shoe, the Vapor Gloves are going to get you about as close to barefoot as can be reasonably expected. Compared to other shoes in their class of sole thickness (Altra Adams, certain Vivo Barefoots like Aqua Lites, or huaraches like Xero Shoes Connects), the Vapor Gloves just might be the best yet — mind that KSO, Classic, and Sprint FiveFingers may be marginally better … … And I’m probably splitting hairs.

If you can’t tell, I really like my Vapor Gloves. Probably the best compliment I can give them is that after wearing them all day long, I have no thought of taking them off. To me, this is one of the best tests of a “barefoot shoe” and it runs totally opposite the experience of most footwear (for me), which is that after wearing shoes all day I usually can’t wait to get them off my feet. Not so with the Vapor Gloves — they keep my feet happy because my feet don’t know the shoes are there. And what else, really, is there to say? How about this: the Vapor Glove is available online for $80 or less — REI (some on sale!) | Zappos has’em | So does The Shoe Mart Also, since this initial review, Greg has written a CrossFit and Running review here as has Erin reviewed the women’s Vapor Glove. Questions? Thoughts? What do you think? Talk to me in the comments!