Hi everyone! I’m Erin, and I’m new to the BirthdayShoes community and excited to join you! I’m a CrossFitter and coach, as well as a trail runner, hiker, yogini, and sundry other things when I get the chance. My interest in minimal shoes came about primarily through a long-term desire not to ruin my feet, hamstrings, and posture as a result of my daily life and physical pursuits. More immediately, I wanted to find a shoe that would function well across as many domains as possible–sprinting, trail running, leaping, deadlifting, squatting, and so on. This is my holy grail! Recently, Merrell sent me a pair of Vapor Gloves for me to put through the ropes. What follows is my review of them … after the jump! 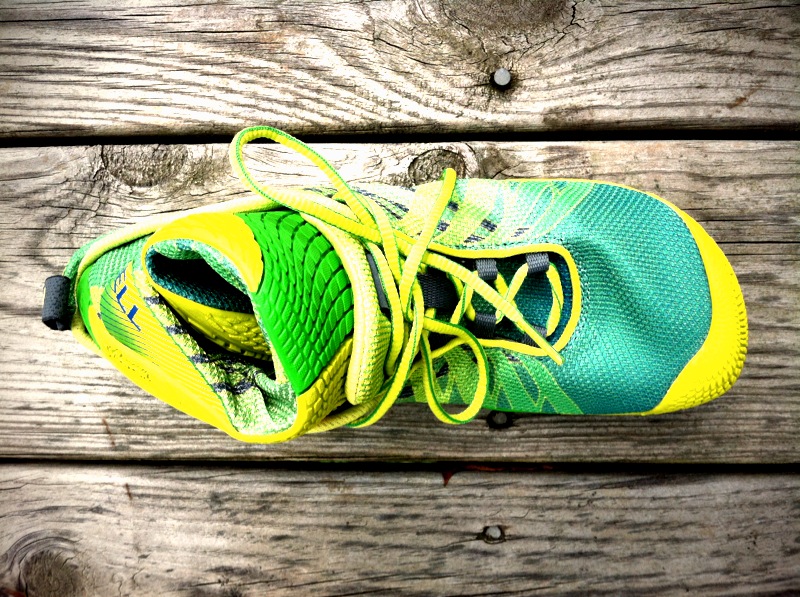 Putting these shoes on for the first time was similar to what I imagine waking up as a mermaid might feel like. One moment I was standing on the ground barefoot, the next I had almost iridescent green, scale-like wrappings snugly buoying up my feet. That may be a slight exaggeration, but really, from the first second of wear, these had the barefoot-but-better kind of feel. All that is to say that “Vapor Glove” is a highly appropriate name for these shoes. They’re incredibly light (5 ounces each), Merrell’s lightest in fact, and fit like, you guessed it, a glove (or mermaid/man tail fins). An added bonus is that while they look a bit odd (as most barefoot shoes do), Merrell has done an admirable job making these wearable in an errands-running, weekend kind of way. I know most probably don’t care about this, but it’s not an awful thing not to look like a half-amphibian who doesn’t give a damn what s/he looks like. Just saying.

As I’ve indicated, these are a pleasure to lace up and hit the road or (not too extreme) trail. The grippy rubber sole held my foot fast in each stride without slipping, regardless of the surface, while the diamond pattern provides plenty of flexibility (see Justin’s spiffy photos for evidence). The mesh allowed for temperature regulation and wicking (although, see Not Quite Performing, below). The toes have plenty of room to spread out and keep the foot stable, and the bumper at the end keeps them safe (see Crossfit). The rubber Vibram outsole is a small slat of rubber, and as such translates ground feel straight to your soles, as one would expect. However, it’s also substantial enough to blunt the sharpness of jagged rocks (I stepped on many in order to try them out). I’ve found that some soles have more give and are less able to shield soles from the odd jag or piece of glass. (In case it’s not obvious I do not subscribe to really truly barefoot running, for a number of reasons). That said, I wouldn’t wear these on a seriously rocky trail.

The upper material, which is a very thin, strong mesh, is kind of rough. I noticed a slight rub on the top of my toes minutes into my run, so I made a mental note that the shoes were not to be worn without socks (at least by me), and then ignored the rub and got on with it. Walking to my car afterwards, I looked down and saw a piece of tree bark on my right shoe. Nope, not bark!—it turns out the mesh had relieved me of a few square millimeters of skin, but hey, at least it wicked away the resulting “moisture.” That said, there was no chaffing anywhere else, and this could be my own anatomical oddity. (If you’re wondering, my toes are longish, but they’re hardly monkey toes.) Another aspect to consider is that the mesh, though fine, still allows some debris to accumulate in the shoe. This will likely only be a problem on sandy or finely crushed gravel terrain, but still something to consider if that’s your usual habitat and you like to go sockless. To be fair, these are marketed as road shoes, so this can’t be counted as a shortcoming in that sense, but something to be aware of nonetheless.

These absolutely work for CrossFit. The sole is flat and has enough grip to work for lifts (although I’m not going to give up my weightlifting shoes anytime soon), and also box jumps (sliding on these is no fun, and some minimalist shoes lack sufficient grip). The zero drop, as always, means that these will transfer ideally between types of activity, whether that’s weights, running, jumping, or swinging on stuff. I didn’t test them on the rope, but I think the mesh is tight and smooth enough to make it through rope climbs as well.

Here’s how you should evaluate the Vapor Glove: These Are For You If: Per Pair: Note on Fit: Slightly large, but can easily be laced up to hug the feet as tight as need be if you’re between sizes. If you want to read more review-goodness on the Vapor Glove, check out Justin’s review here. NOTE: The women’s Vapor Glove is available online for $80 or less — REI (some on sale!) | Zappos has’em | So does The Shoe Mart