I’ve been a fan of Xero Shoes since before they adopted their current monicker. Like many runners, I was greatly affected by reading Born to Run and immediately set out to find myself some of those magical running sandals known as huaraches.

My very first pair of huaraches was the most basic pair that I could find anywhere on the interwebs, from the then-newish company called Invisible Shoes, and is still the simplest pair I own. Nothing more than a 4mm thick flap of rubber with a single long black lace with which to keep it steady on the foot.

But like so many first-worlders who reach into the past to try out some vintage or otherwise culturally appropriated products, I encountered some aspects that I found disagreeable. Though the shoes held on well, the tying was more tedious than I’d been hoping for. I was just starting a new career as a personal trainer and coach, and was rushing around all the time. Between the various appointments I had to get to around town, plus the fact that I usually took my shoes off as soon as I got to the gym, it became important to have shoes that I could get on and off pretty fast.

Slowly and sadly, my old classic style Xeros saw less and less sunshine. My primary go-to became a slightly updated version of the huarache with an elastic heel strap that I could get on and off pretty quickly. But I still checked in on Xero pretty regularly, because I appreciated the absolute simplicity of their shoes while still maintaining quality.

So when I heard about the Umara Z-Trail I was pretty excited. But also wasn’t too sure about the Teva-like strap system. Thankfully, Xero Shoes hooked me up with a pair to try and review: read on!

Before I get into the Z-Trail specifically, let me make a sweeping declaration. I hate where many minimalist shoe companies are headed. The best example of this is a certain not-to-be-named trailblazing minimalist shoe company where one of the founders left only to create… more regular old thickly padded sneakers.

If you look back through my reviews you’ll see that I was writing pretty regularly and then took a multi-year break until recently. It was a busy time, but also I just didn’t have the patience for “minimalist” shoes that were getting thicker all the time.

I mean, I get it — companies need to make money. And they probably make some good money by focusing on shoes for the masses. And the masses still like their fluffy cloud shoes. But, still — if you’re going to call yourself a minimalist shoe company, OWN IT! Focus on simpler.

This is all relevant, I promise. Because this was the kind of worry that filled my head as I awaited the Z-Trail. One of Xero Shoes’ competitors had already let me down by investing so much time in sandals that might as well have been Tevas or Chacos. Was Xero headed that way, too?

Many of the photos in this review have the Z-Trail side-by-side the Luna Leadville Pacer for comparison. Let’s start with the tread. 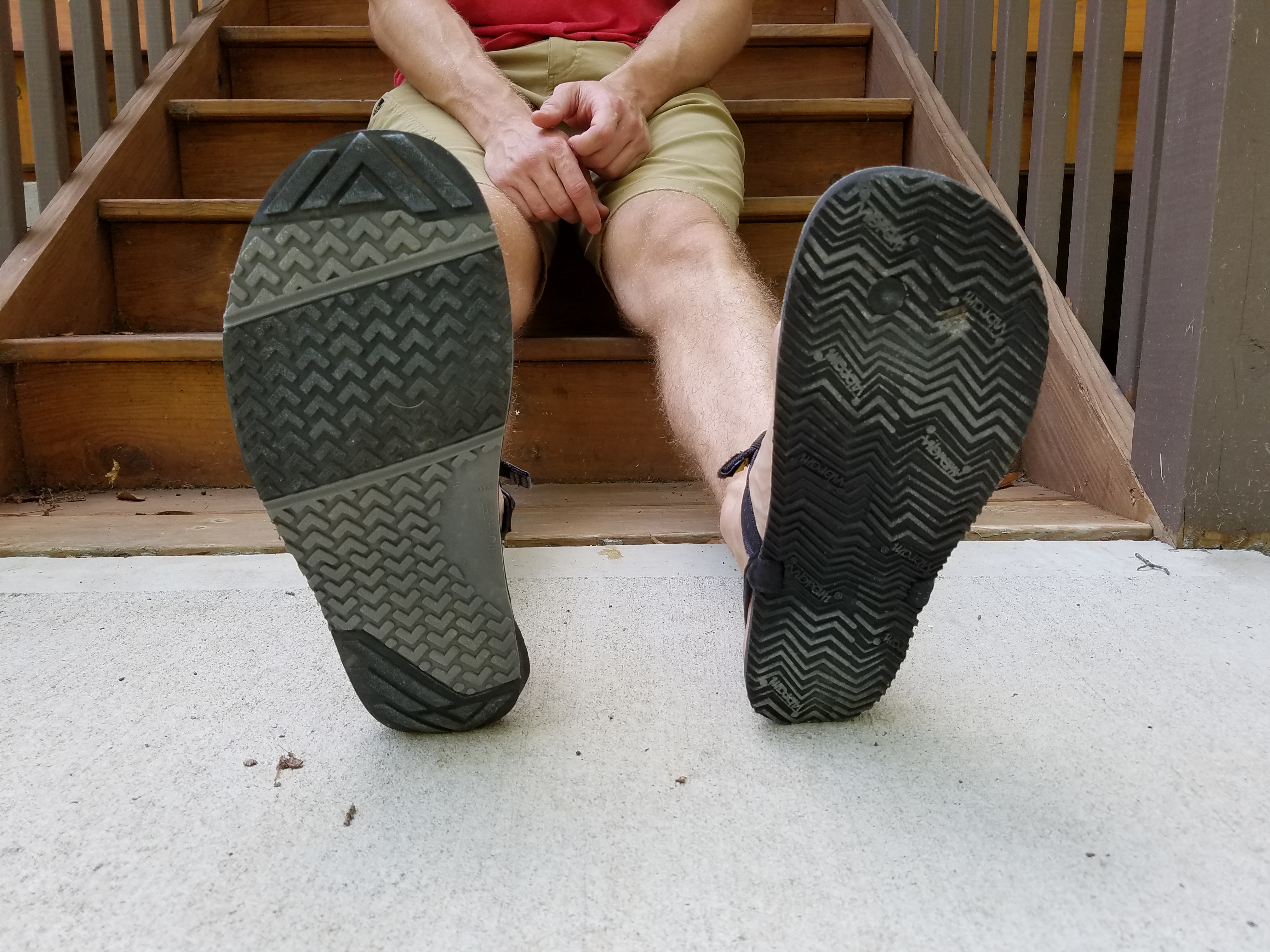 Here are the basic stats on the Umara Z-Trail:

The Z-Trail was ready to go straight out of the box. I had it comfortably fitted around my foot much more quickly than a lot of the thong-style minimalist sandals out there, which usually require several adjustments before they get just right.

(Side note: any time a consumer product declares itself as “vegan” I feel compelled to remark on its flavor. I did test the Z-Trail in this regard; it tastes about the same as most vegan food.) 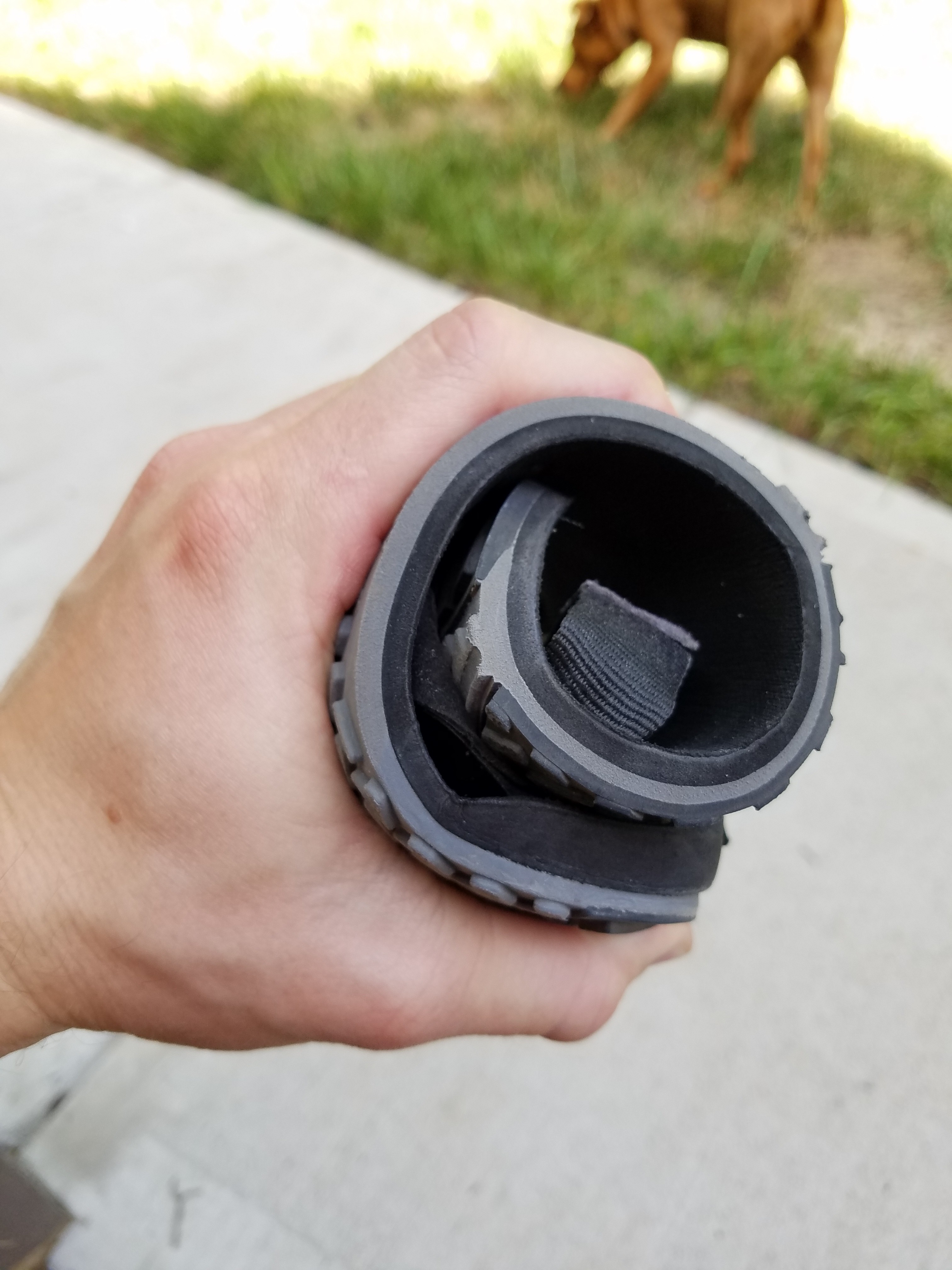 These sandals are super light. I love that. Even with a relatively thin sole, I was really expecting these to be slightly heftier than regular huaraches. But when I hold one in my hand, it barely registers as weight. 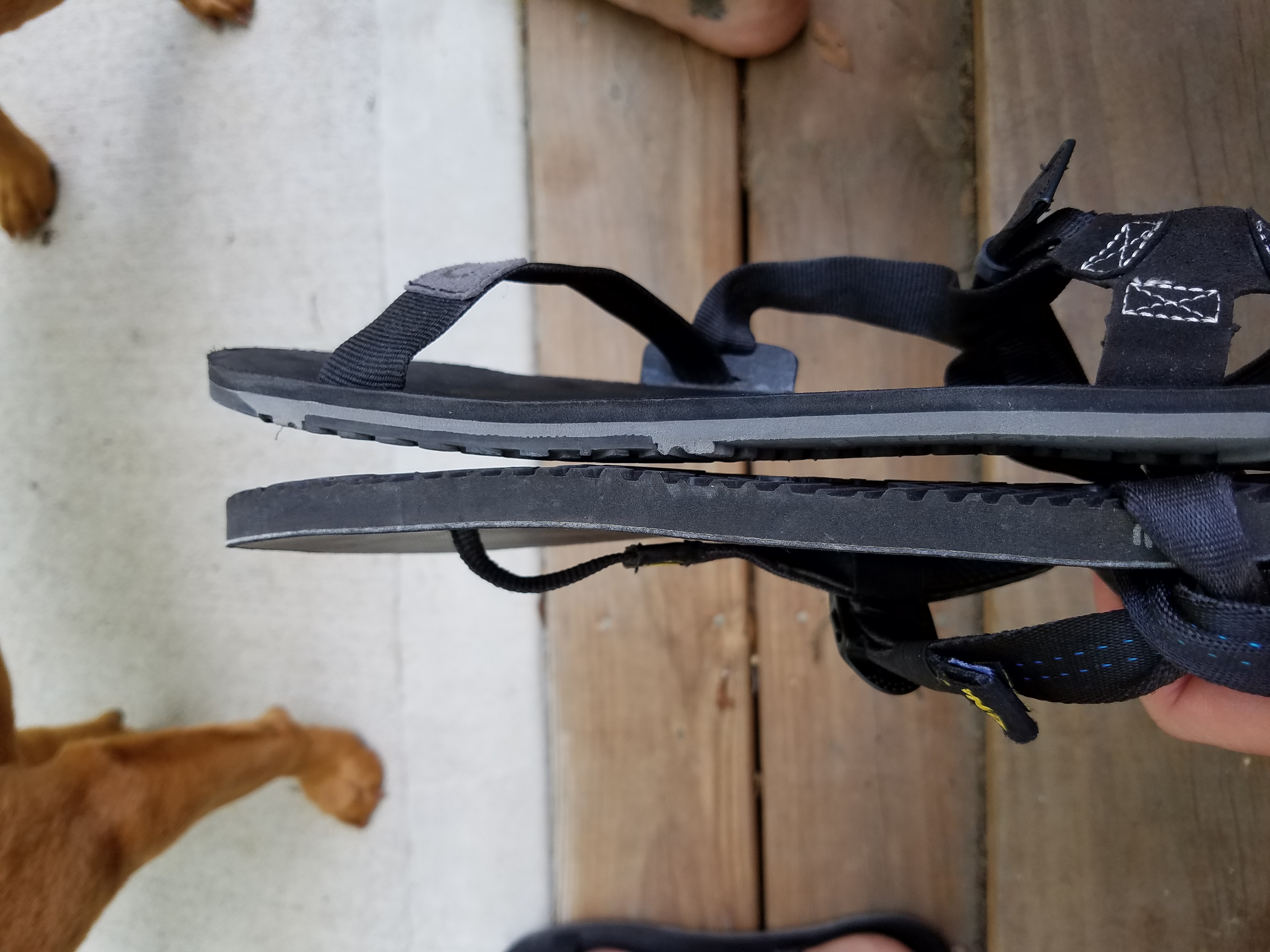 The straps are thin and ribbon-like, not the big hefty nylon straps that you see in mainstream sandals. But true to Xero Shoes’ tradition, there is no loss in quality. The straps are super strong despite how thin they are.

They roll up nicely for travel, if that’s your jam. But they travel quite well when completely flat, too.

The tread is probably my favorite aspect of these. I’ve felt like most minimalist shoe makers often make very thin soles with virtually no tread or super thick soles with monster truck tread. The Z-Trail seems to find that sweet spot of “just enough.”

I’ve had many good short hikes and runs in the Z-Trail, and slippage of my foot on the sole or the sole on the ground has not happened to any extent worth noting. Very cool.

The heel cup and velcro strap on the back helped the sandal be easy on, easy off with a consistent fit every time. 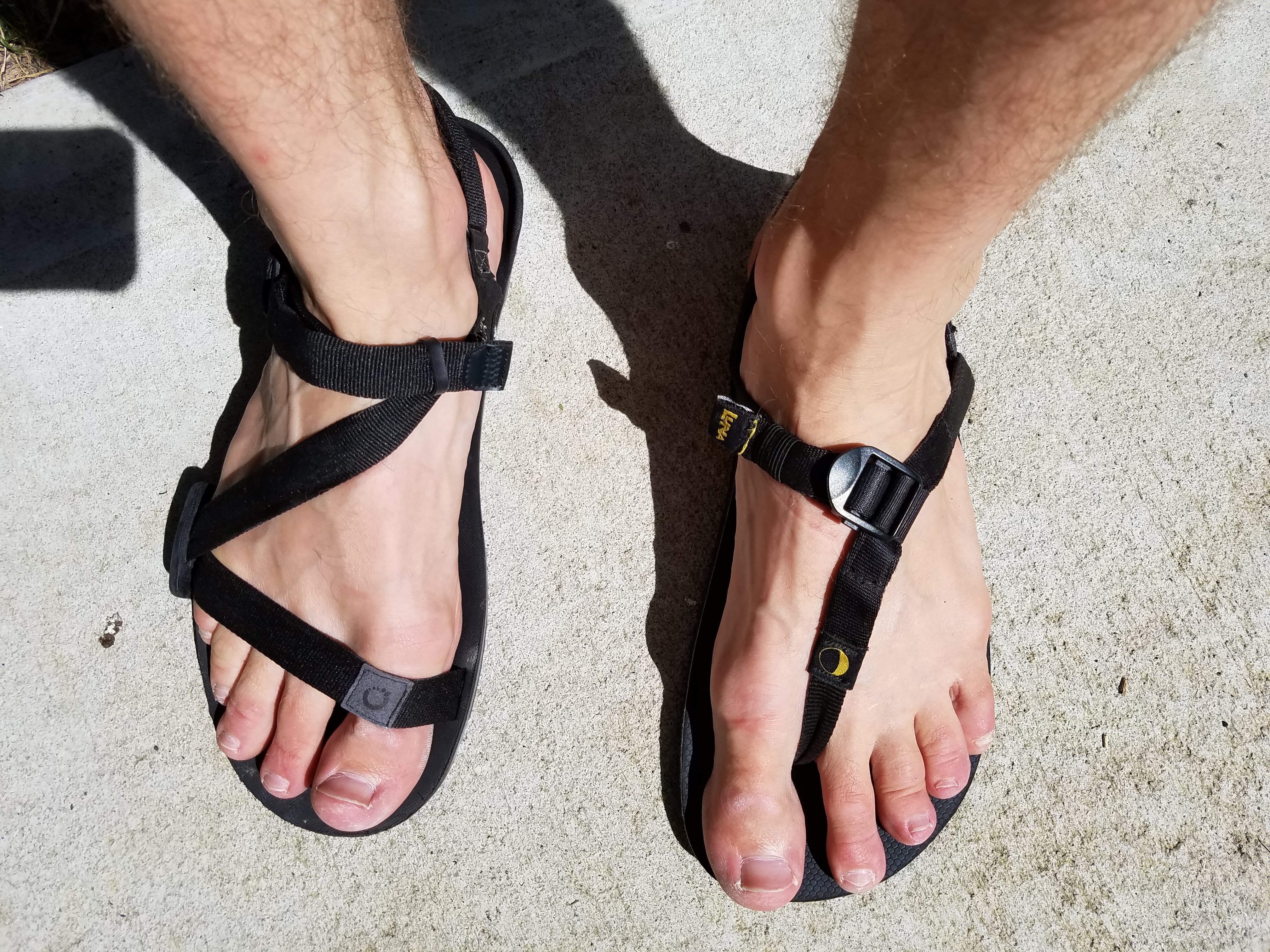 Here’s a description of two uses for the Z-Trail sandals, according to the Xero Shoes website:

I am a barefoot lifter. In the past three years or so I’ve worn shoes in the gym probably 1% of the time or less, and even then it’s typically only been for olympic lifting. I tried wearing these for a high intensity session and it did not go well.

Quick lateral movement and jumping are less than ideal in the Z-Trail. I would argue that this is true of any sandal, but here we have the Z-Trail specifically asserting its usefulness for that purpose and so it deserves criticism for such.

I have yet to meet a sandal that would qualify as a gym shoe. I prefer barefoot, but if I have to wear anything in the gym it would be a proper (minimalist) workout shoe. Sorry. Flat soles are preferable for lifting weights, sure, but that doesn’t mean the rest of the shoe attached to the thin sole is optimized for that purpose. Especially considering that many movements require strong lateral pressure towards the outside of the foot. For me at least, a sandal is third in line after barefoot or a full-coverage shoe.

Ignoring this slight overreach, the shoes themselves are solid. The only complaint I have about construction is this particular loop. This thing was my bane for the past two months. It kept slipping to the side, making the strap bunch up. It would be nice to see this stay in place a little better. 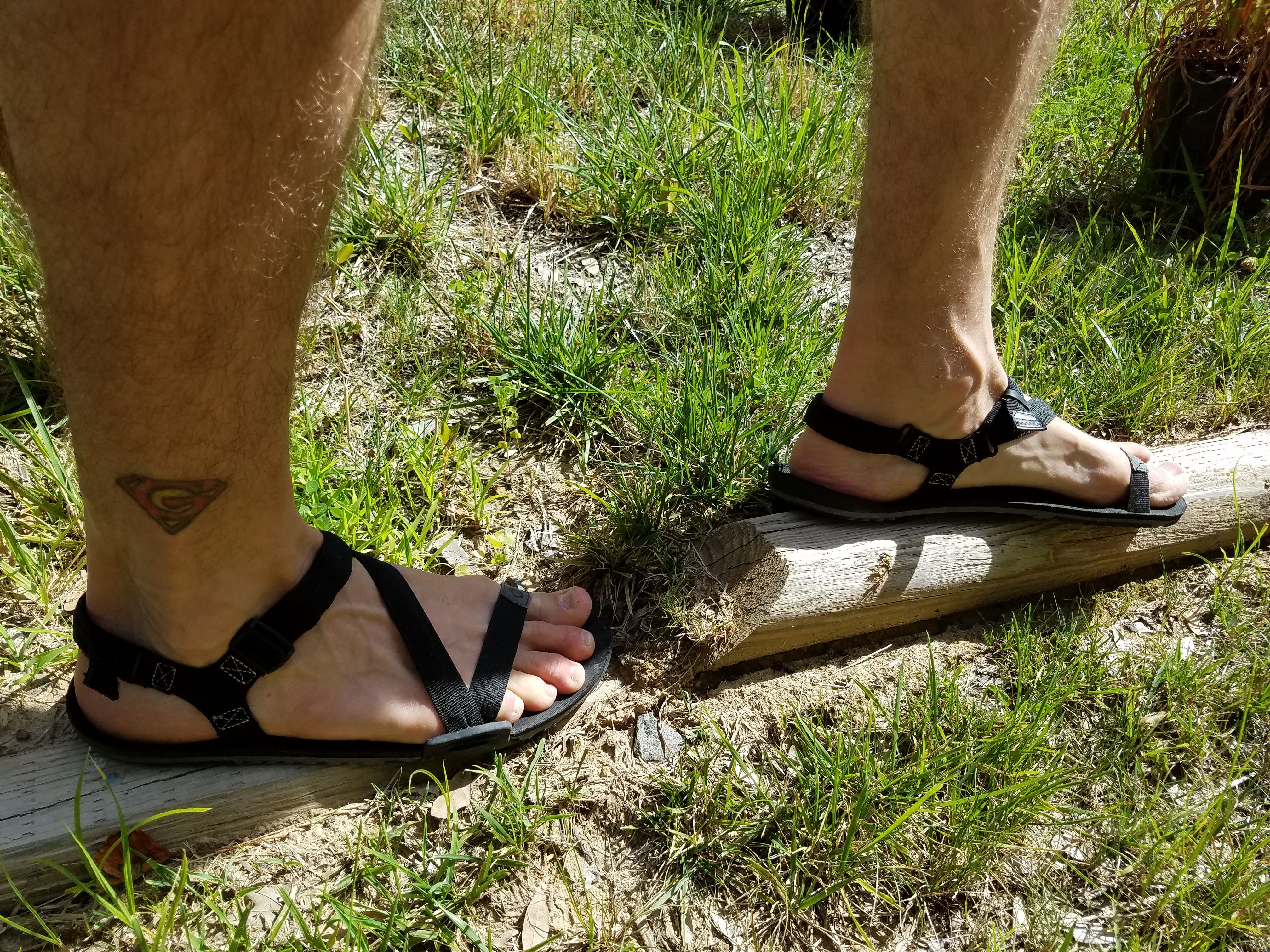 I am impressed by the Z-Trail. It won me over. Normally I’m not a fan of this style of strap/lacing, because done badly it ends up feeling too clunky. And it’s usually done badly. But Xero Shoes nailed it. You get the benefit of full coverage without feeling like your foot is entangled in a ton of nylon.

I think one of the highest compliments that can be paid for a shoe, truly, is that it’s a kickaround shoe. Something you throw on when you’re in a hurry, or you’re not sure what to wear, or when you’re certain that the shoe can take whatever you put it through. And the Z-Trail is an ideal kickaround shoe.

These have become my go-to sandals for camping and short hikes, most especially when there are streams to be crossed and small rocks and boulders to hop on. They stay put, don’t slip around much in water, and have enough tread to handle most of what’ll come your way. And at $80 MSRP, you can’t do much better for the price!