Uh..perhaps we should explain. Australian Vibram Five Fingers fan, Alex, is a bowler for the Tokyo Wombats Cricket Club. He recently gave his Sprints a try on the cricket field. (Alex was previously seen on BirthdayShoes running in Japan wearing his Sprints.)

See a photo of Alex bowling and read what he has to say about wearing VFFs to play cricket after the jump.

Alex on playing cricket in Sprints:

I have probably achieved a first for wearers of FiveFingers – or at least – a first in Japan. I belong to the Tokyo Wombats Cricket Club, a team made up of mostly ex-pat Aussies living in Japan, with a few kiwis and subcontinentals in the mix as well. I have been running in my Five Fingers sprints for over a year now, but have just started playing cricket in them. In a nutshell, they are perfect for bowling and fielding! I really don’t recommend batting in them. Cricket balls speeding towards my toes at 140km is not a comfortable thought. We all know that if you wear Vibram Five Fingers, your feet are your best asset! Aside from being ridiculed by my confused team-mates, that I am ‘bloody crazy’ to wear ‘those things’ on the field, it’s a great feeling bowling and fielding in them, let alone increased agility and nimbleness. 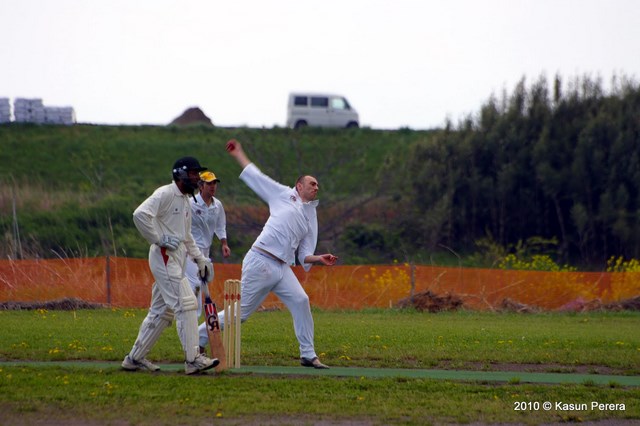 Alex bowling for the Tokyo Wombats in his VFF Sprints.

Thanks, Alex! We’ll keep our toes crossed for a steel plated, batting version of Five Fingers.