It’s great to continue hearing (and seeing!) all the great things everyone is doing in their Five Fingers. Just in the mailbag came the above photo (Can you spot the guy in the grey Vibram Five Fingers Sprints?) and a note from Brian, who plays the fife! A fife is “a small, high-pitched, transverse flute that is similar to the piccolo, but louder and shriller due to its narrower bore” (Wiki). Think: marching. Like the guy on the right wearing the very uncomfortable boots: 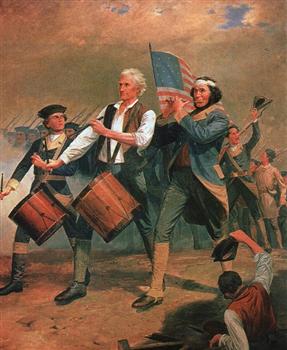 Anyway, here’s what Brian had to say about the photo:

Last weekend I participated in the Deep River Ancient Muster, an annual fife and drum gathering, the largest of its kind anywhere. About 70 corps marched in the parade down the main street of Deep River, Connecticut, and performed before spectators and fellow musicians at Devitt’s Field on the edge of town.

Costumes ranged from formal colonial regimentals and tricorn hats to come-as-you-are shorts and t-shirts . My group was comprised of alumni members of the distinguished Colonial Williamsburg Fife and Drum Corps from Williamsburg, Virginia, and we marched in t-shirts from last year’s 50th anniversary of the corps.

I was undoubtedly the only one at Deep River wearing Vibram FiveFinger Sprints. (see picture)

Actually, barefooting seems alive and well in small town Connecticut. There were dozens of people among the crowd in their original birthday shoes, some marching, and at least one whole corps, the Bluff Point Quahog Diggers, who performed barefoot.

What a great report. It’s good to hear about activities like this where people come together to enjoy music and performance — and do so barefoot!

As I write this, I’m listening to a song Brian wrote that I found on his website—it seems Brian sings and plays guitar, too.

Thanks for sharing, Brian!