Recent G.I. Joe, She’s the Man, and Stop-Loss star Channing Tatum has been spotted wearing KSO Trek Five Fingers while on his way to workout.

TMZ had a video segment titled “If the shoe fits” on the VFF-sighting that aired on television on January 1, 2010. In the minute-and-a-half clip, they show Tatum grabbing his things to go workout. The Paparazzi present ask him how he feels about his recent successes only to notice his “toe finger shoes;” apparently, Channing runs in them.

As you might guess, TMZ takes the opportunity to mock Channing’s choice of footwear. Thankfully, at least one TMZ crewmember is also a VFFer, though unfortunately it seems his reason fell on def ears. I got a kick out of the video clip:

Though Alex does a laudable job in the video espousing the merits of Vibram Five Fingers to the TMZ crew, they were still able to get some quality digs in on VFFs. Perhaps the funniest being an exchange where one guy asks, “What do they do for you?” and getting the response, “They make chicks not like you!” A comment from a questionable source at best:

TMZ had a field day mocking Tatum’s “Avatar” shoes. At least one TMZ crew member spoke up on their behalf, but others were less enthusiastic, to say the least!

Anyway, whether Five Fingers ever go mainstream is an ongoing question here (I think they will!). And if I’m not mistaken, this is the first celebrity sighting (excepting Sergey Brin’s wearing KSO Five Fingers). Anyone have a clue what is going on with Tatum’s left KSO Trek? The strap seems to be missing and I have no clue what is going on with his left foot’s middle toe, but it looks totally mangled: 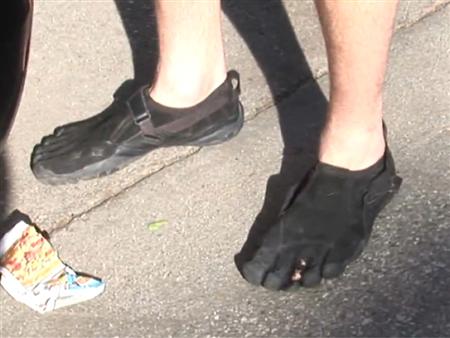 What is going on with Channing Tatum’s KSO Trek Five Fingers here? Looks like a dog got a hold of his left VFF!

Other links on Channing Tatum’s VFFs: