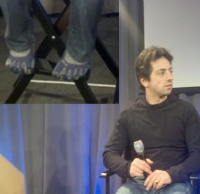 Who’d have thought that Google’s up-and-coming operating system would be less exciting than Sergey’s five-toed shoes? Well, some people around here might have guessed it. Yesterday Google made a big announcement about their Chrome OS and Sergey decided to sport his blue camouflage VFF KSOs!

This marks the second time Brin has been spotted sporting his blue camouflage KSO Five Fingers, the first time was when Brin was interviewed by John Batelle.

11:15AM Sergey Brin has stopped by. No rollerskates this time, but whatever he’s got on it’s feet, it’s something else.

Of course they were referring to his VFF KSOs. Since then, we’ve seen VFF-centric posts about Brin’s monkey shoes over at Gizmodo and Crunchgear.

Who cares about Chrome OS, anyway? Sergey Brin, Co-Founder of Google and one of the richest guys on the planet, wears Vibram Five Fingers!

Can you say, “Trendsetter?”