Being the new kid (geriatric new kid, that is!) on the Birthday Shoes block, I only own two pair of Vibram Five Fingers, the Classics and Bikilas. My Classics don’t get a lot of wear except as an occasional flip flop alternative (Justin’s preferred use of Classic Vibrams) and my Bikilas are my “go to” running shoe. Though I dig the barefoot feel they give me, the Bikilas hurt my sensitive feet on the rocky trails around here—at least that was the excuse to convince my wife I needed another pair!

Since I don’t own any “KSO type” Five Fingers, I only know what I have seen on the internet. I pictured the black KSOs as the alpha male, ninja, gorilla foot model. Honestly, I wasn’t sure if I could pull it off. But, when I saw the Vibram marketing photos of the Trek Sports, they looked so cool and sleek. I manned up and ordered a pair (via CitySports). I ordered a size 41, the same as my others. They arrived quickly and in good order from CitySports shipped free using my “BIRTHDAY” shipping code.

I expected the Trek Sports to be somewhat bulky, but in fact, they weigh almost exactly the same as my Bikilas. And they are sleek, though perhaps not as sleek as in the Vibram marketing photo. I think they must stuff them with tissue paper or something. Also, mine arrived with a silver strap, which is different from the black one in Vibram’s pic. Perhaps a little less Ninja, but now I can wear them to church with grey slacks!

My review and a zoomable flash movie after the jump!

The Trek Sport uses a new fabric for the upper made out of coconut, but what the heck is “Coconut Active Carbon” material anyway? Given the outside of a coconut is anything but soft, I didn’t really know what to expect. Turns out, the material is very soft and flexible around my foot. Phew! Also, unlike the KSO Trek, no kangaroos were harmed in the making of the Treks. Rejoice PETA! There are a few different materials used in the upper, and it turns out that the grey in between the toes is just the reverse side of the solid black material above the toes. The metatarsal area is cloaked with a mesh material that is stretchy and airy. It might even work well for a Victoria Secret négligé. Beneath the strap, there is another section of the solid black material that is lightly padded making it easy on a high arch like mine.

Update 10.01.10 – After running some medium trails, the fabric on the upper of my Trek Sports ripped/split on the right big toe along the toe protection. While incredibly comfortable, this leads me to believe the Coconut Active Carbon material used for the upper may not be sturdy enough for a trail running shoe, or, perhaps, the method of implementing toe protection needs to be improved. You may want to consider spending the extra $25 to get kangaroo leather KSO Treks for a more rugged trail shoe.

One design improvement we first saw in the Bikila that has been carried over to the Trek Sport is that the seams along the outside of the big and little toes (previous VFFs have had two seams atop each toe) have been eliminated on the Trek Sport. It “seems” the outermost seams on the big toes have a tendency to bust, so eliminating this seam is a design improvement. Also, the TPU (ah, another fancy acronym) toe protection (the same plastic-y “toe nails” that have discolored to a dingy red on my Bikilas), covers more toe now on the Trek Sport. Hey, maybe they will coat a whole shoe in it someday. Call it the TPU Trek maybe? Might not breath too well, but it would be a hit at the disco.

The heel pod / improvised Achilles notch rocks on these things! It is big, tall, lightly padded and very comfortable. It even works like a shoe horn when slipping them on. 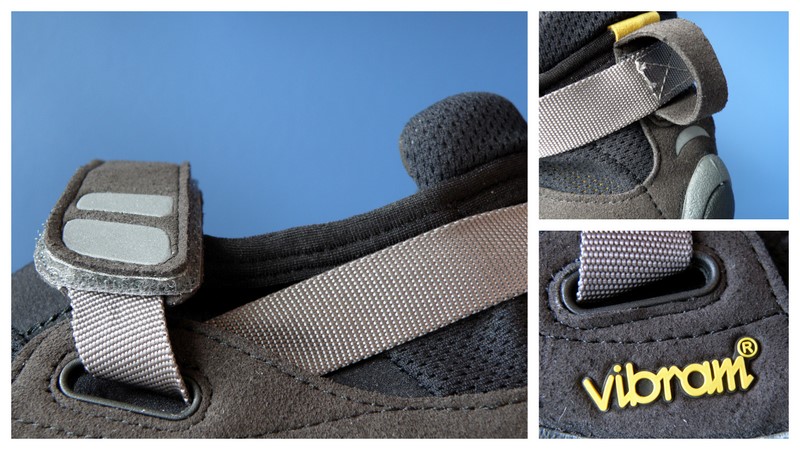 Like the KSO, the strap is sewn into place at the heel. As it turns out, I should have given the straps a good tug, they are attached with velcro at the heel and are removable. Thanks to uhjj for sending in the photo to the left (click to enlarge). From what I can tell, the strap support system uses a totally new material. It is felt-like (not pelt-like, no animals harmed here). It is used to cover the velcro portion of the strap (along with two large reflectors) and also surrounds the shoe on both sides and around the heel. The material by itself is pretty flimsy. The loop, used to pull the shoes on, is not reinforced and I worry it could break. Luckily, the eyelets, where the strap is threaded, are reinforced with a plastic backing. 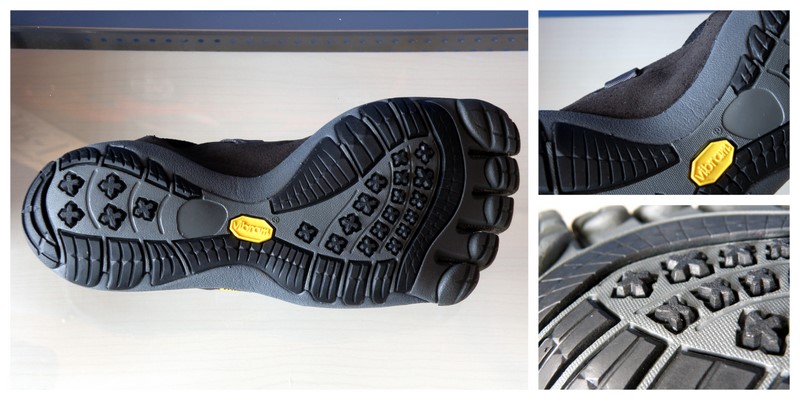 The sole is much more rigid than my Classics or Bikilas and the arch area curves in more (where the sole looks more like an hourglass), leaving the sole fairly narrow at mid foot. The Trek sole looks good to go and the extra 4mm of tire-like tread should help me handle rough terrain.

Hmm, what else? Another reflector on the heel, yellow Vibram logos, same ol’ anti-microbial yellow insole, the typical stuff.

I compared my new Trek Sports to my Bikilas last night at a local nature park. The loop I ran began with a section of heavily wooded dirt trail with lots of tree roots, creek beds, sharp curves and silty dirt. The loop ended with a section of the “groomed” main trail. Paradoxically, the groomed trail was the roughest on my feet because the rain has washed out all the small rocks leaving mostly large ones. Finally, I did a short run on pavement.

There was definitely a noticeable difference in the thickness of the Trek sole and therefore some loss of the “barefoot feel” I get with the Bikila. That said, the Trek Sport way out performed the Bikilas on the trails. They grabbed the curves and didn’t slip in the silty dirt like the Bikilas did. Also, my feet were more protected over roots, rocks and other rough terrain in the Treks. The Bikilas were painful over the rocks on the main trail, but the Treks worked just fine.

The road test I did was equally dramatic. The Treks felt cumbersome and clunky on the road and I think I will stick with my Bikilas there.

The test run results were pretty much what I expected and I am really looking forward to more “barefoot” time on the trails in my new Trek Sports. You can take my Trek Sports on a virtual spin below:

(Hint: After you zoom, the icon on the right lets you toggle between moving and rotating)