Why am I posting on the greatness of Classic fivefingers?

Because they are the unsung star of the Vibram FiveFingers line-up— under appreciated and frequently overlooked.

I’ve been operating birthdayshoes.com now for almost six months. In that time, I’ve seen a ton of VFF photos, heard a lot of stories, and enjoyed interacting with many a fivefingers fan both through email, on the forums, and through twitter. One of the things I’ve learned from these interactions is that the majority of VFFers choose to go VFF KSO (and Black, “Ninja” KSO Five Fingers, at that). In fact, roughly half of respondents to the sizing and fit questionnaire I ran own KSOs. I even considered my KSOs my favorite for awhile.

Indeed, selecting KSOs over Classics as your only pair of fivefingers makes a lot of sense. First off, most people initially see their fivefingers as footwear for use in a specific sort of activity. Throw in a bit of overall “foot glove skepticism,” the pricepoint of buying a pair of Vibrams, and wanting to be able to do the most number of things possible in whatever model you select, and you get people generally opting for the slightly more expensive, but also more universally functional KSOs.

It’s reasonable to go KSO — no argument. However, today I’d like to point out what makes the Classics so very classic, and in my opinion, the all-around must-have fivefingers model, one you’ll wear more than any other, the last model I’d give up over all the others, and the perfect compliment to your KSOs (“Standard issue” or KSO Treks), Flows, or Sprints.

I first reveiwed Classic FiveFingers in mid-2008. At the time, I was using them predominantly for CrossFit, kettlebell exercises, hill sprints, and bodyweight exercises. Put differently, I mostly wore my Classic fivefingers for a particular sort of activity, usually revolving around some sort of exercise.

Over a year later with the option to wear any FiveFingers model except the Flows (One day I’ll get a pair!), I find myself continuously returning to the Classics. I spend more time in my two pairs of Classic VFFs than in any other style of fivefingers. I sport my Classics to do all of the little things of life like heading to the grocery store, going for a walk, taking out the trash, grilling out on the deck or heading out to a restuarant—you get the idea. And I still opt for my Classics as my de facto choice for weight-training or bodyweight exercises. I frequently even wear them in the house — usually because I just forget to take them off.

For me, my Classic fivefingers have just about replaced my Birkenstock sandals and even my trusty flip-flops — they’ve become my go-to everyday shoes.

There are a few reasons. For all the KSO or Sprint owners out there who don’t have Classics, consider these points. And for all other Classic lovers, please chime in with anything I’m missing.

First, I’d like to argue in favor of the Classics aesthetic.

I think there is a hang-up on Classic fivefingers due to their unique look: they lack a real cousin in the traditional world of footwear. Perhaps the nearest counterpart to the Classic VFF design is women’s “flats,” a perfectly acceptable comparison for female VFFers but sometimes a dealbreaker for men; indeed, Vibram’s new Moc fivefingers has a higher vamp to help make the open-topped fivefingerse style more masculine.

To me, this problem is overblown. It’s important to keep in mind that FiveFingers are a whole new breed of footwear. They look weird to the uninducted no matter which style you’re wearing. It’s for this reason that for all VFF models, you have to crank up the confidence and “own” the look, a subject worthy of an entirely separate blog post.

Even still, the question remains: do Classics looking feminine? Eh, I don’t think so. Looked down on from above (like so), Classics can look the strangest and, well, ugliest. Yet this is not how most others view Classics-clad feet. From a third-party observer, they just look like rubber-toed feet—different.

Having completed a few months of “style and error,” I’d argue that Classic VFFs look best with shorts (For example*, see Tripp, Shawn, and Jason) — I always opt for Classics over KSOs when I wear shorts. This is both because Classics are uncovered on top and thereby cooler (A precursor to wearing shorts in the first place) and also because I think Classics are easier to understand by non-VFFers as footwear.

Comparatively, KSOs worn with shorts come off more like socks. I can only speak from my own experience, but the few times I’ve happened on someone wearing KSOs with shorts, my instant reaction was “This guy is wearing nothing but ankle socks—oh wait those are VFFs!” Even more telling, many VFFers have passed through TSA security without taking off their KSOs; few have accomplished the same feat in Classics**.

As for wearing Classics with pants, it can be done. I think they look best with bootcut jeans or cargo pants, particularly if the hem of your pants can cover the exposed part of your foot (Sometimes this requires cutting your jeans, if you’re into that look!).

Still not convinced? Okay. Let me point out that Classics are the most minimal Vibram Five Fingers that can still function in outdoor use.

We could debate the merits of fivefingers for hours—why not just be barefoot? Why not just wear shoes? Where do VFFs fit into the overall footwear spectrum? And perhaps the greatest question, is there a balance to be struck between being barefoot and being shod?

Without going into the nuances of these questions, I’ll just say it: I think Classic fivefingers are the closest thing (yet) to striking a balance between the joys and freedom of barefootedness and the protection of footwear. And this is largely due to Classics being little more than a sole with a smidgeon of fabric upper.

It’s the thin Vibram sole that provides some protection and the bit of nylon upper that keeps the foot glued to the VFF. The combination is an exercise in design constraints amounting to something wholly different in the world of footwear, neither really a shoe nor a sock.

And if you’re still not convinced why Classic fivefingers are fantastic, I’ve got two last reasons for you.

Classics are convenient to wear, which is the number one criteria for any “default footwear.” The open-topped design of the Classics makes them the easiest to put on of all fivefingers models. For seasoned toe-slot finding Vibram Five Fingers fans, Classics can be put on without hands (like slip-on sandals or loafers), making them the automatic choice for an impromptu need for footwear in a hurry—like when you’ve got your hands full of keys, trash, food, or baby. Even if you’re not as adept at pulling off the no-hands Classics feat, Classics are still super easy to put on as compared with either Sprints or any of the closed-top varietals of fivefingers. 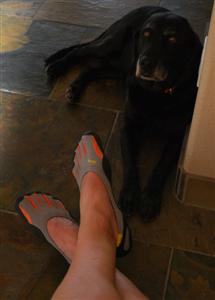 Ryan relaxes in his favorite VFFs, the always comfortable Classics!

Lastly, due largely to their convenient open-topped design, Classics are the most comfortable VFFs. I know, I know, you immediately object, “What about that elastic band digging into the top of your foot?” And I say, what about it? If the elastic band bothers you, you can either eliminate it entirely or just wear it at it’s most loosest. A few have objected to the heel tab on the Classics, but generally, for non-active, everyday wear, the heel-tab is pretty innocuous, and even that can be modded away. Any seasoned Classics wearer will tell you that once you’ve broken in your Classics, these two objections disappear, leaving you often completely forgetting that you’re even wearing “shoes.”

So where does that leave us?

Given that most of our time is spent doing mundane, everyday things, the kinds of things that don’t require a velcro strap, given that we are creatures of convenience and comfort, and finally that we desire the freedom of being barefoot but also need to find balance in a world with cultural norms (and broken glass), Classic fivefingers are must-have VFF model for any fan of this funky footwear. I know wouldn’t give up my Classics for anything (and I want more).

If you don’t yet have a pair, you don’t know what you’re missing, and if you’re looking to pick up a pair of Classic FiveFingers, start your search for a reputable online retailer via the Birthday Shoes virtual Vibram Five Fingers storefront!

* I cite all male examples as there’s generally no debate about their aesthetic on womens’ feet — even though Classics look virtually the same across the sexes (some color combinations excepted).
** To my knowledge, no one has tried putting an actual pair of socks on over their VFFs and then trying to pass through TSA security! Any takers? (H/T to Ryon Day for the idea)