Me running in red/grey Vibram Five Fingers Bikilas. (All photos by Kent)

The Birth of Birthday Shoes

Over a year ago, when Justin mentioned to me that he was starting a blog about Vibram Five Fingers and minimalist footwear, I thought it was interesting, but after looking at a pair of VFFs, I didn’t really think they would catch on (wrong!). We ended up tossing around ideas for a domain name and I came up with BirthdayShoes.com as a play on “Birthday Suit”. He liked it! Then, Justin went off to build his blog and I wasn’t involved in Birthday Shoes at that point.

I occasionally peeked in at the site and a year quickly flew by. Then, a few months ago we were talking how Birthday Shoes had really taken off and how Justin was overloaded with other work duties and we agreed that I would help out with the blog. He even sent me some Classics so I could feel like part of the club. Now, after seeing how passionate folks are about their Five Fingers and wearing mine for a few months, I can see that the phenomena of VFFs is here to stay. 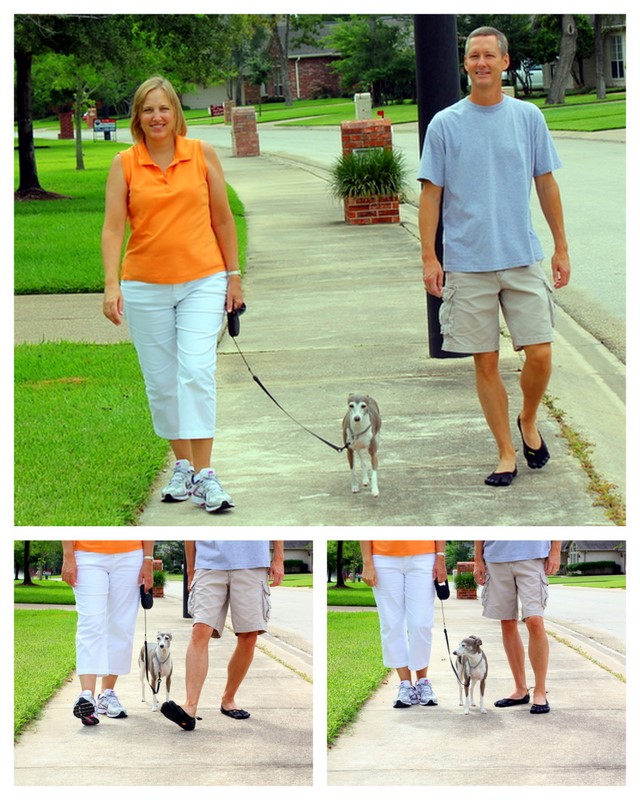 Walking with my lovely wife, Anna, on the left, our dog, Ali, in the middle, and the goofy looking guy wearing the Classics is me.

Initially, I wore my Classics on my nightly walks around the block with my wife. We have an Italian Greyhound, Ali, and she loves to go “Walkin’!”. I really liked that I could go barefoot outside without getting dirty feet or fear of cuts, hot pavement, rocky trails, etc. But, there had to be something more to this.

Kicking it up a Notch in my Classics!

Next, I began reading on Birthday Shoes about barefoot running and forefoot striking. I became fascinated. It all just made sense. I was a x-country and track runner in high school back when the distances were all in yards, but I haven’t run consistently through the years. At 51, I had given up on running due to knee and back pain. I had also developed some not so lovely love handles. This was the answer to my mid life crisis! Who needs a Ferrari? I decided to try running again this new way; barefoot with a forefoot strike. Who knows? I might lose some weight and maybe feel a little younger.

Here is a look at my Onitsuka track spikes last used about 33 years ago. Onitsuka later became Asics. I noticed there is a little place that rubbed through the sole on the right side of my forefoot area.

The distance running I had done in the past was in padded running shoes and on my heels, but in shorter track events, I remembered running more on the balls of my feet. Out of curiosity, I cautiously ventured into the attic (from where I had done a swan dive a few months earlier breaking my elbow) to dust off and examine my old track spikes that had sat in an memory box for 30+ years. Interestingly, they were engineered for a forefoot strike, albeit for shorter distances. I started to get really excited about the idea of getting my old calves back in shape enough to maintain a forefoot strike while jogging. One night, after a few too many beers, I even convinced myself that I could be a Masters track contender at 400 or 800 meters. If I could just get my times back to where they were in high school, I would be right up there with the best in the 50+ bracket. Ha!

I started with one time around the block. I had a very hard time getting my stride right. I was constantly adjusting it and I was not letting my heel touch. I paid for it. My calves hurt for days. A few days later, I started around the block again and my calves cramped up. I kinda felt like giving up. Eventually, I made it around the block once without locking up. Though my calves were sore, it didn’t seem as bad as before. Unfortunately, my stride never felt right and I was still adjusting where my foot landed.

So, about the same time, the Bikila buzz had started on Birthday Shoes. After the first batch at CitySports sold in minutes, I started to get the fever. I decided I had to have some! These Five Fingers were designed for running and that was what I was struggling with. I had my credit card ready when the next batch popped up and bagged a pair of Red Bikilas.

The Bikilas arrived. I slipped em on, headed out and I immediately felt a dramatic difference. They fit perfectly around my foot like a glove and though the soles are only slightly thicker, they felt much more comfortable when my foot struck the ground. Inexplicably, my stride felt right and consistent. I was landing on my forefoot, then gently touching my heel to the ground before springing forward into my next stride. I tempered my excitement and stopped after one time around the block. I started to imagine running longer distances and maybe even shedding those pounds. The next evening, I went twice around the block with equally successful results and not much calf pain. Then, I got up the very next morning and ran 2 miles without a hitch!

After gradually building up my mileage in the Bikilas, I try to do a 3 mile run every other day and a 6 miler once a week. I have shed about 10 pounds and had fun doing it (geez, sounds like an infomercial). You can see my runs at DailyMile. Come join me at the Birthday Shoes group we started there. DailyMile is social networking for runners, walkers, cylclists, etc. You can track your runs manually or upload them from a Garmin. You can set goals too. Instead of running Masters track (dang, those old farts can run), my more realistic goal is to run a 5k in less than 25 minutes.

Footnote: The Bikilas are still awesome, but I have developed mild achilles tendonitis and have tried to relieve this by cutting back a little on my mileage (hard to do when it is so much fun!) and occasionally running in minimalist Saucony Grid Type A4 racing flats (review to follow).

Thanks Justin, for helping me see the advantages of Five Fingers and barefoot running and welcoming me into the community! Oh, and I didn’t have an extra million laying round for a Ferrari anyway :((.