Recently, New Balance sent me a pre-release version of their upcoming New Balance NB Minimus Road. Months ago, when I first saw pictures of the Minimus Road, I thought they had retro look. This was not what I expected a minimalist running shoe to look like, so I was curious to see how they would perform. The pair I received are dark graphite with florescent red accents and different from the colors I had previously seen. After receiving them, I wore them for a couple of days and took them out for a 4.5 mile road run. I have been very pleasantly surprised by their great look, feel and minimalist features that I have detailed in the following initial review.

Read my initial review, see a video overview and lots of pics after the jump.

Running is all about form and I am a strong advocate of a forefoot strike to naturally absorb the impacts of running. But which running shoe promotes good form better than others? Some say that running barefoot or in Five Fingers forces you to have good form. Others might argue that barefoot running over long distances is just too hard on the feet and a little cushioning is beneficial. The New Balance NB Minimus Road strikes a nice balance. 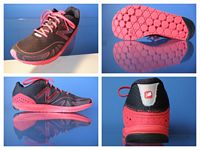 It promotes good form running and has firm cushioning to ease the pain of long runs and rigorous training schedules.

The pictures of the NB Minimus Road that New Balance previously released (See them here) showed two color combinations. One was white with orange and blue accents and the other was blue with yellow and white accents. I prefer the graphite/red color combination I received, but the others look nice too. There was also an interesting little tag attached to one of the shoes cautioning runners to slowly transition to the NB Minimus Road.

The NB Minimus Road definitely has running shoe styling, and the retro look is reminiscent of the New Balance 320 running shoes from the 1970s. The 320 was rated #1 in 1976 Runners World for “fit” and “comfort”.

Though the upper is a mix of traditional and retro styling, it is built on a very minimal shape(last) which features a wide, roomy, and comfortable toe box. The heel pod is a bit more traditional. It is tall and padded and probably adds a little weight to the shoe, but holds my foot comfortably in place.

Weighing in at about 8 oz., they are not the lightest shoe around, but not heavy by any stretch. While some racing flats with minimalist characteristics are lighter, you get extra comfort with the Minimus Road versus a stripped down racing flat.

These shoes feel good and are a pleasure to wear and run in. With their soft suede like insole, roomy toe box and smooth upper, they are comfortable enough to be worn as house shoes. One exception is that the tongue on my pre-production version has rough edges that scratch my foot when wearing them barefoot. This would seem to be easily correctable and I hope New Balance fixes it.

The Minimus Road feels very flat with a 4mm heel-to-toe drop which helps promote a slight forward lean when forefoot running and the undercut heel discourages heel striking. Is it possible to heel strike in these? Yes, but short barefoot practice runs are great to reinforce good form.
Update 11.21.2010 – I find it very difficult to heel strike in these shoes. They are very good at keeping me on my forefoot.

There is a very slight raised arch support. Interestingly, the New Balance MT101 has virtually no arch support, but has a slightly larger heel-to-toe drop. Although I can feel the raised arch, it did not bother me on my first run. Would I rather not have it? Yeah.

At first glance, the midsole and outsole of the Minimus Road appeared to be combined into a single layer similar to the Nike Free, but upon closer examination, I saw two separate layers. Typical running shoes have EVA midsoles and very thin rubber outsoles with lugs. EVA midsoles are light and cushiony and rubber outsoles are durable and provide traction. While the Minimus Road midsole section is a standard cushioned material, the rubbery outsole is different. It is flat with no lugs and is a bit thicker than a typical rubber outsole. It has a honeycomb pattern and is labeled “Ndurance”. There is no marshmallow feel with this sole. It is firm and grips the road well. The flat sole has a very nice ground feel when running on hard surfaces. It doesn’t give barefoot type feedback. Instead, it feels very level and stable, like it is part of the road. It will be interesting to see what kind of traction the flat outsole provides in the rain. Ideally, this separate outsole will wear well better than a single layer EVA sole too. I think New Balance is really on to something here. I like the sole a lot.
Update 11.21.2010 – This outsole is whisper quiet when it touches the ground.

The New Balance NB Minimus Road shoe is now out and available for purchase. They can only be bought online via the New Balance store, so if you’re looking to buy online, you can find a pair of the Minimus Roads here for a hundred bucks. Otherwise, look for a local store to try them out!

As I put more miles on these, I’ll be sure to add additional thoughts to this review!