The origins of “toe shoes” — the original “barefoot shoe”

Five Fingers were the brainchild of Italian designer Robert Fliri. Fliri first had the concept of a foot glove with articulated toes — what are now colloquially referred to as “barefoot shoes,” “minimalist shoes,” or “toe shoes” — back in 1999. Fliri had been spending a good deal of time outdoors in the mountains of Italy, periodically taking off his shoes. It was from these experiences that he conceptualized toe shoes, remarking that, “We have five toes: when they can move and grasp the ground independently, and when you can really sense the surface under your feet, your body is able to do what it is designed for by nature. That is a powerful feeling.”

Fliri was making a simple case: if feet evolved to experience the world “naked,” why are we strapping heavily cushioned, “high-heeled” marshmallow shoes like Nikes onto our feet in order to walk around “safely” or without hurting ourselves? Did [Mother Nature | God | Evolution | insert your higher power here] churn out a foot that was broken by design? Surely not!

Despite the almost obvious power of toe shoes — foot gloves that let feet function and feel similarly to how they would barefoot, Robert Fliri’s toe shoe concept languished until a fortuitous meeting with Marco Bramani, the grandson of Vitale Bramani. Vitale Bramani is the founder of the Italian company Vibram (pronounced “Vee-brum”). As the legend goes, Bramani believed that “Five Fingers” (So named because the Italian word for “fingers” is the same as that for “toes”) might make a novel choice of footwear for use on sailboats or in other activities that required greater ground-feel. Sometime in the early 2000s (perhaps 2004?), Bramani brought Fliri into his grandfather’s company to develop the world’s first toe shoes.

Just how did Vibram, a company that had only ever made rubber soles for over 70 years for other shoe manufacturers, blow up the traditional paradigm of footwear design? A little bit of help and just a little five-toed rubber sole . . .

In 2006, when Vibram FiveFingers were just starting to make waves as a novel, but incredibly strange (“Cool! But who would wear those? Not me!”) approach to footwear, “Barefoot” Ted McDonald contacted Vibram USA requesting to try out the Classic Five Fingers for running. Tony Post, the ex-Rockport Boston Marathon runner turned Vibram USA CEO, spoke to McDonald and agreed to have him run the Boston Marathon in Vibram FiveFingers (source).

Vibram FiveFingers began piquing the curiosity of anyone who saw them, slowly growing in popularity among fitness enthusiasts wanting a more “barefoot feel” (Arnold Schwarzenegger famously lifted weights barefoot) and also with runners, of which a niche group of barefoot running enthusiasts such as “Barefoot” Ken Bob Saxton already existed.

Runners began taking serious note in 2009 thanks to Christopher McDougall’s riveting Born to Run (Go here for a full review). In a nutshell, Born to Run takes a serious look at ultra long-distance runners and races; an indigenous long-distance running tribe, the Tarahumara Indians, living in the Copper Canyons of Mexico; and the high-incidence of running-related injuries — all cast against the past few decades of high-tech, ever-more engineered running shoes. McDougall weaves these stories together in an artful, can’t-put-the-book down story with simple question at it’s core: why are running shoes that are designed to prevent or reduce injuries not working?

Back to Barefoot Ted: he’s one of the main characters of Born to Run, seen running barefoot but also racing along the Tarahumara Indians in the Copper Canyons of Mexico in Vibram FiveFingers. If the wily Barefoot Ted (“El Mono” or the “monkey”) could run an ultramarathon close to barefoot in some of the harshest terrain on the planet, what was stopping any of us from doing the same? Readers of Born to Run were left inspired to ditch their Nikes and try barefoot running — or pick up some toe shoes! Not too surprisingly, it wasn’t long before Vibram FiveFingers as a barefoot running shoe really started going mainstream.

Why are Vibram FiveFingers good for running, anyway?

How could a shoe with no arch support and no cushioning be good for running? Wouldn’t that hurt? You barefoot running people must be crazy!
These are common questions for Five Fingers-shod or barefoot runners. It’s a given in our modern culture that you must wear running shoes, trainers, or sneakers to safely move around outside. It’s assumed that asphalt is hard and dangerous to run on without lots of cushioning. It’s even assumed that heel-striking is natural.

Like so many mainstream ideas, these preconceived notions about running are very likely false. For example, it seems that there is an inverse relationship between the amount of cushioning in your shoes and just how hard you’re willing to strike the ground. This really isn’t surprising when you think about it: imagine runnning barefoot on a hard surface. You would land as gingerly and gently as you possibly could. 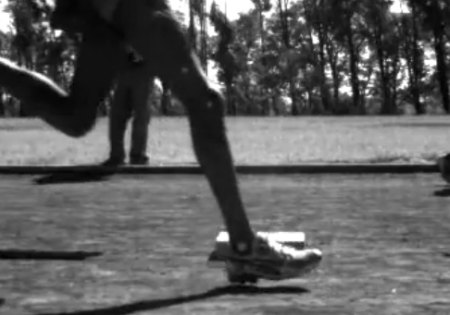 Comparatively, add a bunch of foam underneath your foot and everything changes. It suddenly doesn’t matter so much how you land when running on hard surfaces because the foam helps absorb the impact on your foot and mutes the sensations of a varied, non-uniform ground. Consequently, people running in cushioned shoes tend to take longer strides, strike the ground hard, and strike the ground at their heel. The shockwave spawned by this striking then shoots up your ankle and leg. Further complicating the matter is that adding thick heels to your shoes changes your natural running gait from midfoot/forefoot to a heel-strike.

It’s not that you can’t run gently in modern running shoes, it’s that you both don’t have to and many find they simply can’t (due to the forced heel-strike and the resulting shockwave).

Running barefoot or without much protection/cushioning as with minimalist footwear works so well at encouraging gentle, natural running because the lack of cushioning and support forces you to run lightly, with less impact. and, in turn, with less or no injury (More on How to Run here). That’s how the theory goes, anyway, and the science is finally starting to bear that theory out.

So if barefoot is best, how do Vibram FiveFingers “fit” into this? 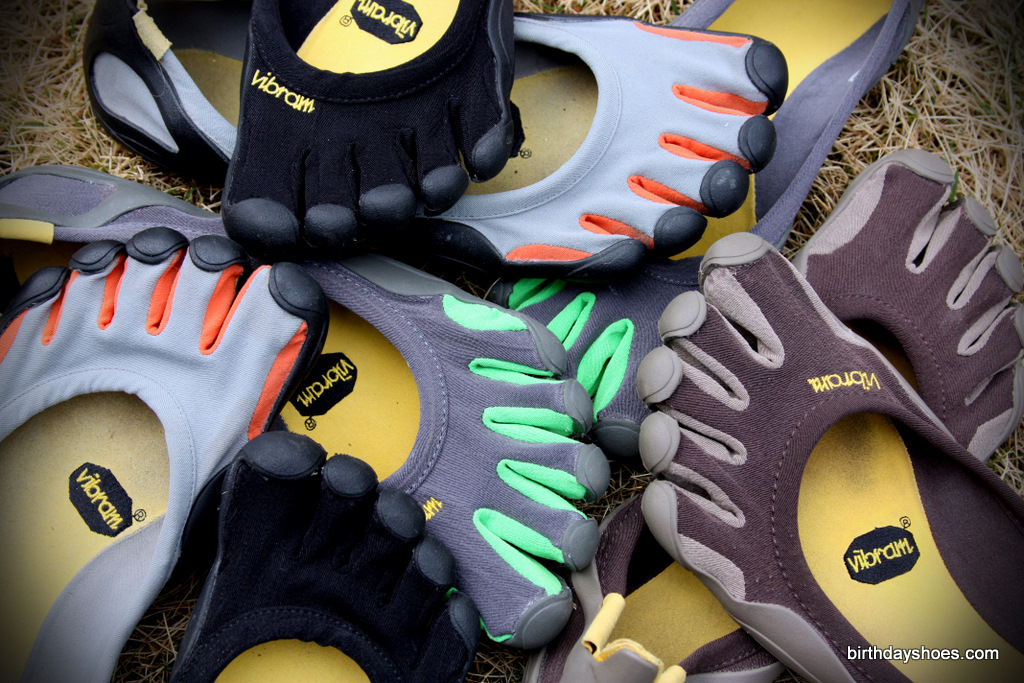 A pile of the open-topped Classic Vibram FiveFingers, the original “barefoot shoe” from Vibram and the most minimal, outdoor-use VFFs available.

Vibram FiveFingers are so great less because of what they are and more because what they are not. They are just a thin bit of rubber strapped to your foot, complete with individual toe slots. They’re just toe shoes. No arch support. No cushioning. This minimalist design puts your foot very close to being in it’s natural, barefoot state mostly because it draws it’s structure and function from the foot. What a concept! As a result, FiveFingers allow your foot to express itself dynamically — meaning toes can move independently and the foot can flex, bend, and twist, engaging all the muscles and tendons of the foot similarly to how the foot would function barefoot. The thin layer of rubber in Five Fingers also allows a good deal (though not all) of ground feedback through to the foot while still affording some rubbery protection.

Vibram FiveFingers are not perfect — both muting ground feedback and being a “one-size-fits-most,” mass-produced foot glove make them imperfect (barefoot and “shod” will never be equivalents!). FiveFingers specifically, and toe shoes generally, simply protect the foot a bit while getting out of the way of natural foot functionality.

Oh how toe shoes — and “barefoot,” minimalist footwear are growing! 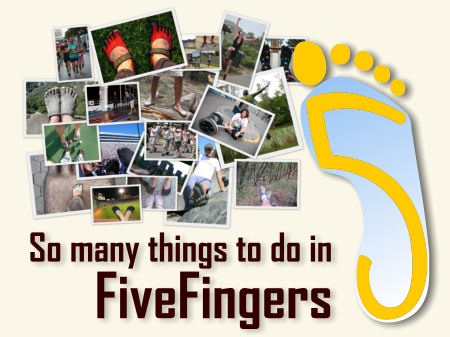 Fast forward to today, and Vibram’s FiveFingers shoes have revolutionized the sports shoe market by shifting the paradigm around what it means to have healthy shoes for running, playing, walking or whatever — our feet don’t need lots of cushionioning, arch support, elevated heels, or motion control to provide for safe movement. As is the case with Vibram FiveFingers, a minimal sole (as little as 5 – 10mm thick) that is flexible and moves with your foot (thanks to the toe separation) can make for an incredibly versatile shoe — one used for running marathons, walking, hiking, weight-lifting, travelling, casual wear, or really just about anything you can imagine. In fact, one of the core tenets of this site has been documenting just how users are using them — people are doing everything in their toe shoes—often to the amazement of people stuck in the mindset that shoes need to be built up.

In just five years, FiveFingers have grown from a simple “Classic” toe shoe, to a line of “minimalist footwear” with over 15 models — like the running-oriented FiveFingers Bikila, the trail running/hiking KSO Trek or TrekSport, the sporty/casual/fashionable Speeds, the indominatable, do-anything KSO, or the just-released sprinting/high-intensity fitness-focused KomodoSports. And there are other manufacturers are getting in on the game: you’ve got Vivo Barefoots, New Balance with their NB Minimus line, the Merrell Barefoots, Soft Star Shoes, or the latest entrant to the “toe shoes” market, the Fila Skele-toes. Or go super old school with some huaraches sandals A shoe revolution really is “a foot.”

Vibram Five Fingers have exploded the traditional footwear paradigm and are at the forefront of the minimalist footwear movement. As minimalist running has taken off, other shoe manufacturers have taken note and alternative “barefoot running shoes” or just close-to-barefoot casual shoes are starting to show up everywhere.

In short, a return to a more natural state of movement through “freeing your feet” is here to stay. As more and more people discover the “barefoot alternative” of Vibram Five Fingers, or simply the kid-like freedom of being barefoot outdoors, the traditional footwear that has dominated the sports shoe industry over the past few decades just may go away — or at least reduce in scope. Who needs over-engineered, over-hyped, over-marketed, over-cushioned foot casts on their feet anyway?

Wouldn’t you rather let your feet be free?

Where do I get these toe shoes? ALERT!

If you want to pick up a pair of Vibram Five Fingers, do not go to Google! Unfortunately, over 500 websites (and counting) have popped up hocking fake FiveFingers on what appear to be legit websites (sites like vibram-five-fingers.com — sounds legit, but it’s just a counterfeit site!). You’re better off hopping over to our directory of online retailers of Vibram FiveFingers — many of these guys ship for free and you can read or write store reviews right on this site. Here are just a few online retailers of FiveFingers we like:

If you just want to learn more about FiveFingers models, here’s a good place to start. Or check out the BirthdayShoes.com forums, download the Beginner’s Guide to FiveFingers, or just surf around this site.

BirthdayShoes is dedicated to minimalist footwear of all varieties — especically Vibrams — and has a very fun-loving, almost barefoot community of supporters! Stick around!