Let me recap: Classics are my all-time favorite toe shoes.

It’s something I’ve talked a decent bit about recently (see here and here), but it stands repeating: Classic FiveFingers are fantastic. What makes them so great? Two things stand out: This one-two punch makes the Classic an incredible “barefoot shoe” for knocking around town, wearing to the park, walking your dog, or lazying about at the beach or the lake or anywhere. Classic FiveFingers are even good for running! Yes, you read right! Don’t believe me? Barefoot Ted ran the first Copper Canyon Ultramarathon in Classic FiveFingers! Yeah, he had the grey/orange, black-soled Classics* on the run-heard-round the world as made famous by Chris McDougall in Born to Run (read it already). Thus I find it painful to watch as people (mostly men) overlook the Classics in favor of some of the more close-topped Vibrams. Sure the new-fangled toe shoes are awesome — the ultra-light SeeYa is probably the closest new model to the Classic’s ground-feel and airiness — but I can’t put any of them on like I can the Classics. That is, like a pair of my favorite flip-flops. I’d also like anyone who finds the Classics feminine to tell that to Ted McDonald, who I’d not want to run into in a dark alley and is one of the godfathers of the whole minimalist/barefoot shoe movement in the first place! Full stop. You get the point: I like Classics and I’m not alone. Classics are the only model of FiveFingers I’ve ever heard of people collecting. It’s just that as more and more folks buy up the new hotness in toe shoes, they overlook the age-old beauty of the Classic; Vibram is then left looking at sales numbers scratching their heads, thinking, “I guess no one likes the Classic so we’ll have to pair that offering back.” And that is exactly what they’ve done. Thankfully, there are still a few options out there to score some seriously sweet Classics, which is what you’re seeing within this post — two colorways of Classic FiveFingers that are pretty rare.

The above two pairs are rare colorways of Classic FiveFingers. They’re rare for different reasons though. The navy/white-soled Classics are rare because they can only be purchased via a handful of European retailers at a premium to U.S. prices and then shipped here (if you can find someone to do it, that is). The other is rare because it’s the only pair of FiveFingers yet to be produced with co-branding between Suomy, an Italian manufacturer of motorcycle helmets, and Vibram (which is an Italian company). I got both thanks to a friend in the toe shod community who helped facilitate the transactions. It aint easy or cheap to pick up these puppies, but I’m glad I got them. 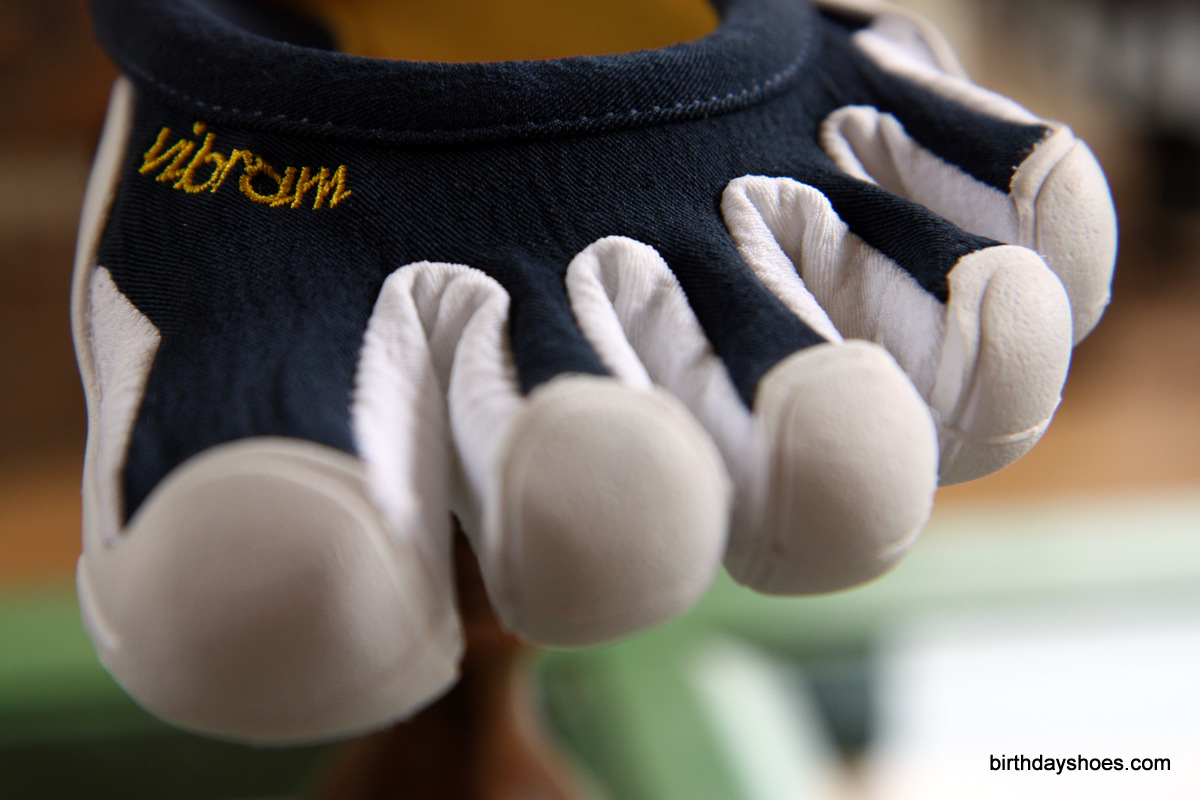 These clean white-toe-walled and white-soled Classic FiveFingers have a striking look to them.
The navy/white/white-soled Classic FiveFingers colorway is a conventional Classic style in that it matches the fabric on the toe walls to the sole with a different colored upper. However, what’s probably the most strikingly different aspect of this colorway is the white Vibram sole. There are other Classics with white soles (historically available in Europe), but they’re not common. We might also get lucky enough to get some white-walled Olympics-ready flag-styled Classic FiveFingers that feature white soles this summer (in 2012). That would be sweet. I’m a big fan of light-soled Classics as the black-soled varietals tend to stand out more unnaturally against my foot. In the case of these navy/whites, the combo works perfectly — a deep blue cast against a bright white with Vibram canary yellow accents. Yes, I’m geeking out on the colorway. It’s just good! And how cool are those white soles? 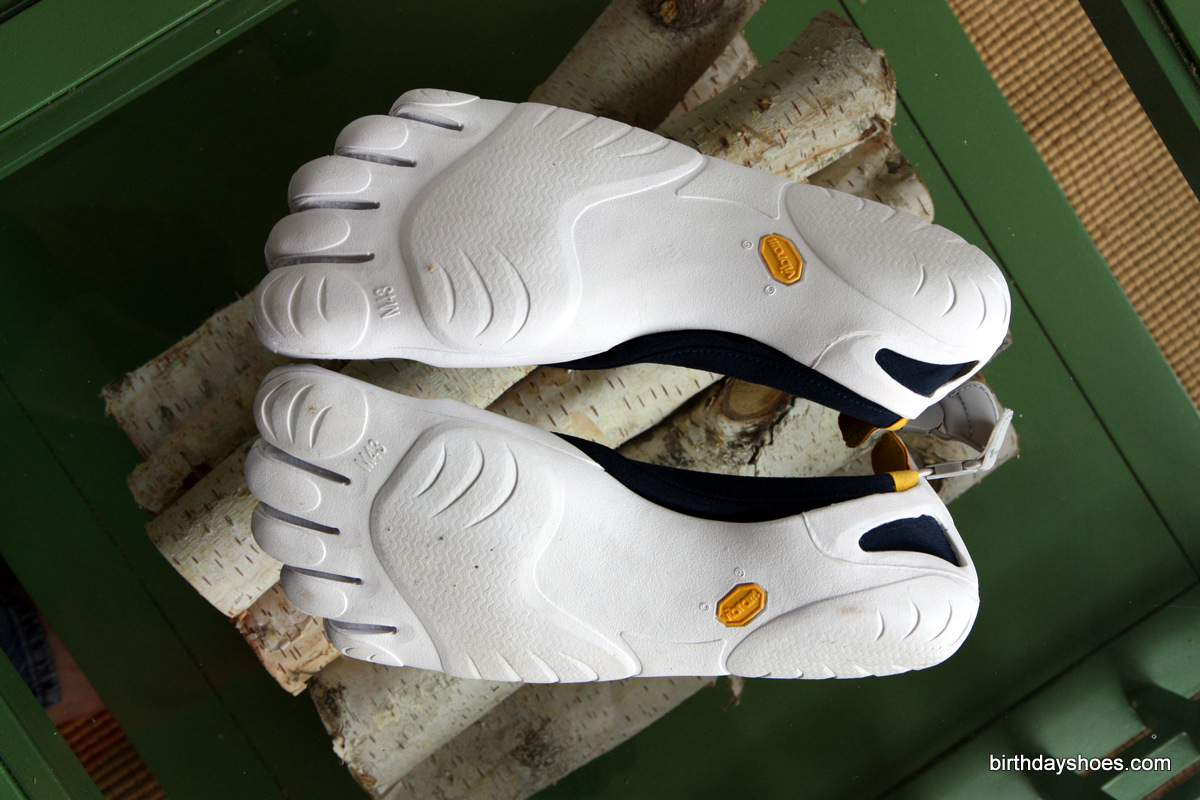 There have been a number of white-soled Classic FiveFingers through the ages though none have made it to the U.S. to date. Though the sole will show dirt (on the bottoms mostly) with wear, they still look fantastic.
I was a little concerned the white rubber soles would show a lot of dirt. They don’t. Mind, I am in no way going to trounce about in the rain or mud in these puppies but that’s because I don’t want to stain the white synthetic toe walls. This color combination just works. I’d actually happily pick up other white-walled, white-soled Classics with other primary colors in the upper fabric if they were available, too. 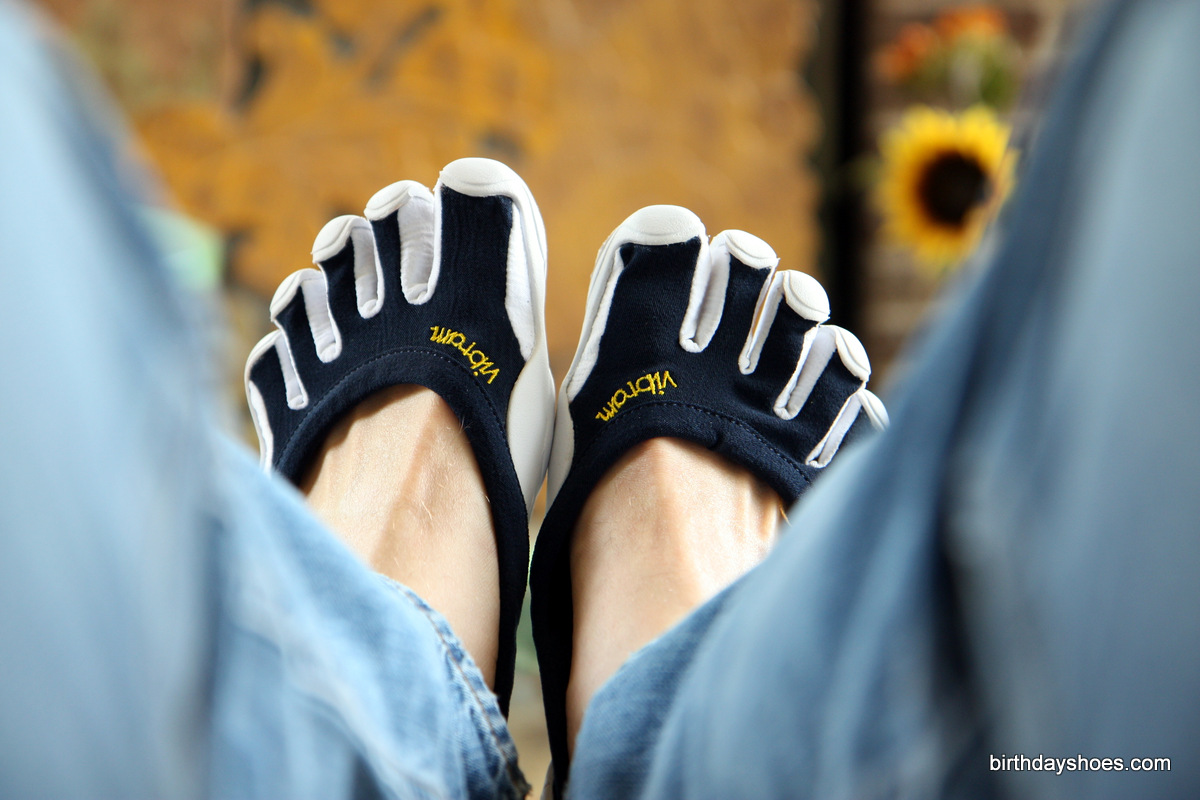 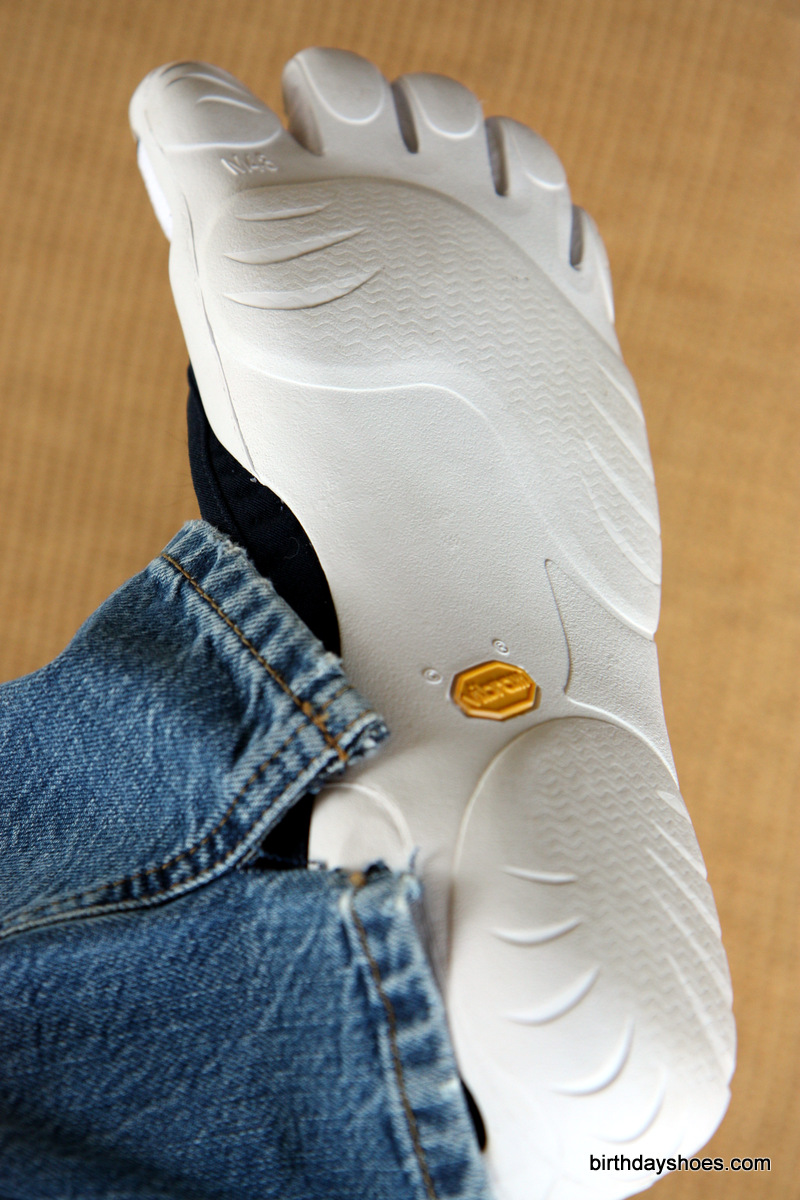 I should probably also have some photos of me wearing these with shorts. If I take some, I’ll add them. You’ll notice that I tend to wear the Classics casually; they’re a little hard to pull off in non-casual environments. Meanwhile, I find that “boot-cutting” my jeans — cutting up about an inch on either side of the hems of my jeans (as in the picture on the right) — does wonders to make my jeans lay down on my feet, “easing” the vertical lines of my legs into the right angle and horizontal lines of my feet. The boot-cutting also helps to extend my pant legs over the tops of my feet a bit making them feel a little less “naked” to the world. See? 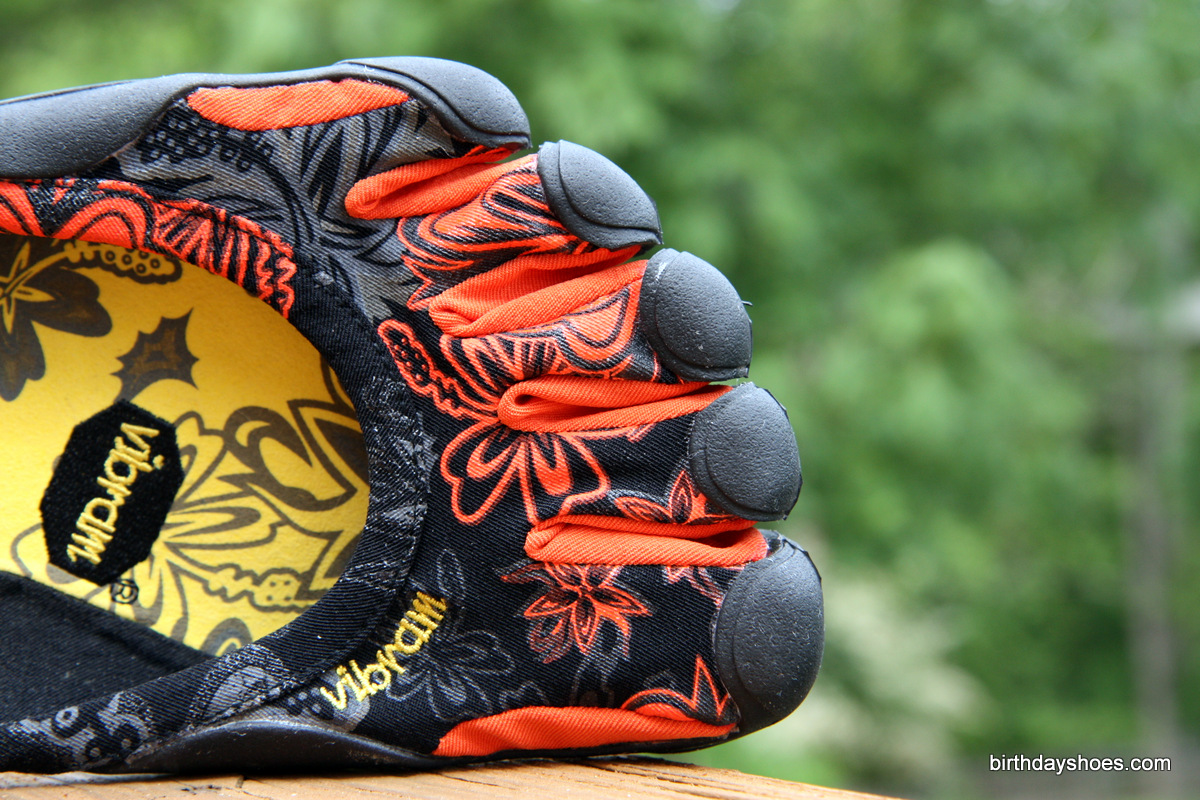 The Suomy/Vibram co-branded FiveFingers feature a crazy floral print that leaps over the toes and into the insoles of these toe shoes.
These are the probably the most double-take-inducing toe shoes Vibram has ever produced. Save (maybe) for the Carezza’s. What is going on here? Well, it’s basically a pair of black Classic FiveFingers dressed up with a beachy, bright-orange and grey floral print and orange sidewalls to match. They feature a “Suomy” embroidered logo on the right shoe. FiveFingers fans of old will recall that Vibram (once upon a time) only put a Vibram stitched logo on one shoe and not both (and prior to that, not at all). The word on the street is that the Suomy Classics are the only co-branded FiveFingers ever produced and are likely the only ones we’ll ever see again. Picking up a pair on these grounds is a bit fanatical and honestly, I could do without the extra logo, but I’m pretty sure these unusual Vibrams would not exist but for some kinship between Vibram Italy and Suomy. Why I like them. I confess that I wasn’t sure about these Suomy Classics at first sight, which was quite awhile ago. They grew on me though each time I saw them and at some point I just thought: I think these things gotta be awesome. They’re crazy loud and fun, which when you think about it, isn’t saying much in the context of the articulated toe market. Toe shoes are already loud by nature. Adding a beachy Hawaiian print isn’t going to change things much on that front. Also, I’ve come to realize I like it when FiveFingers employ tricks of the eye in their uppers that “meld” the toes together. The KSO Remix is a great example of that as is the old blue camouflaged KSO. The Suomy’s take the floral printed upper and extend it over each toe so that the toe cuts almost melt away. It’s a very slick effect and one that is being reproduced in the Olympic Classics (so it seems). I’ll also say that while no one really sees the insides of your FiveFingers unless you take them off, the print on the insole is a nice touch. 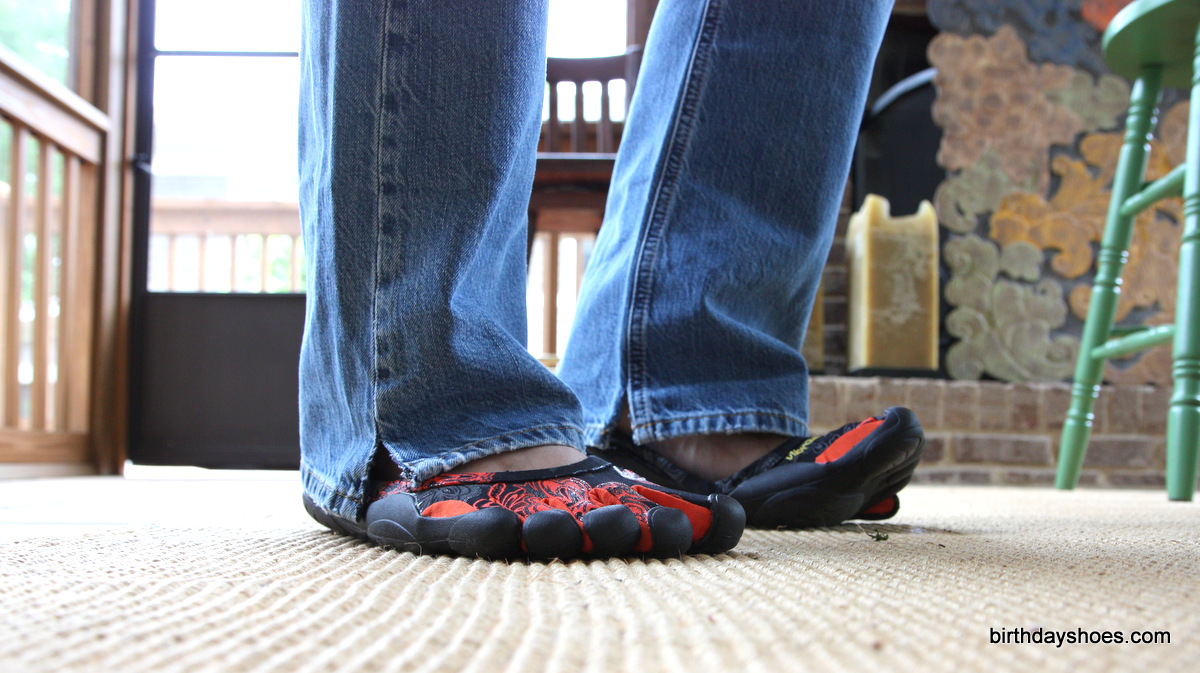 Tear-up the sides of a pair of jeans so they lay down better over your feet makes any pair of toe shoes look a little more natural. That’s definitely the case with Classic FiveFingers with their low-cut instep.
Again, worn with jeans though I’m finding I also like to wear these with some black shorts. Because they’re so loudly colored, I think you could probably pair them with just about anything and “get away with it” — whatever that means in the Suomy’s. Live wild and kick the Suomy’s around town. Expect people to stop and ask you questions. Wear your toe shoes with confidence!

There’s not much else to say here. I mostly wanted to share some photos of some rare Vibrams that you’re not likely to see often, if ever. If you think these are incredible, well, the best thing you can do is share this post far and wide on the Internet, with Vibram, with your local retailer, and on and on. Tweet it. Facebook like it. Google+ it. Shout the URL from the window-tops. Let your voice be heard so we can get some more awesomely colored Classic FiveFingers! * My first pair, as first reviewed some 1,400 days ago and read by some 350,000 people. Crazy.