If you’re like me, then it’s time to replace those original Minimus Trails that you picked up back in 2011 just a few weeks after they were widely released. Luckily, New Balance has come through with a reboot and update of the Minimus 10 in both the Road and Trail editions. They’re aptly called the Minimus 10v2 Trail and the Minimus 10v2 (for the Road).

Read on to see how they fared!

Because it can be a bit difficult to keep New Balances naming scheme straight in your head, before we jump into the review here’s a quick history of the Minimus line up (click the links for Birthday Shoe reviews):

2011 – New Balance comes out with the Minimus 10 in Road and Trail versions. The Trails have a Vibram sole and both have a 4mm heel drop. There are also casual Life and Hiking/Multi-Sport versions. Currently all of these older models are still available, most at a discount (prices ranging from $50 – $120) — see Joe’s NB Outlet.

2012 – The Minimus Zero lineup comes out in Road and Trail versions. These are zero drop heel. New Balance also releases a Minimus 10 Trail in leather. 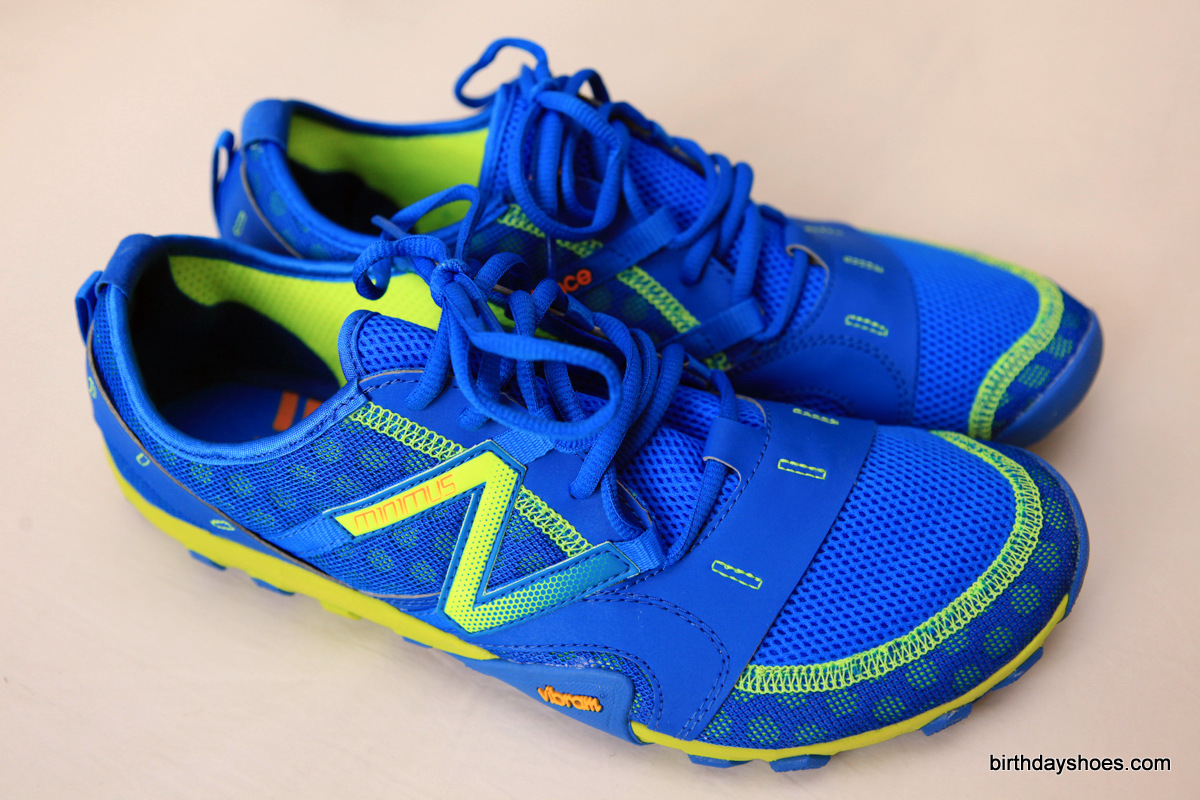 For those of you familiar with the original Minimus Trails, to answer your first question, yes the toe box and rubberized strap across the top of the shoe feels like it has been widened—rejoice! For those who don’t have a history with the original Trails, there was a terrible forefoot band over the top of the shoe that after an extended session of wear, felt quite restricting. I’ve put in a couple of 16 hour days comprised of running, lifting weights, walking through large airports, and just wearing them casually and at this point I think I can declare that there is no more strap problem. 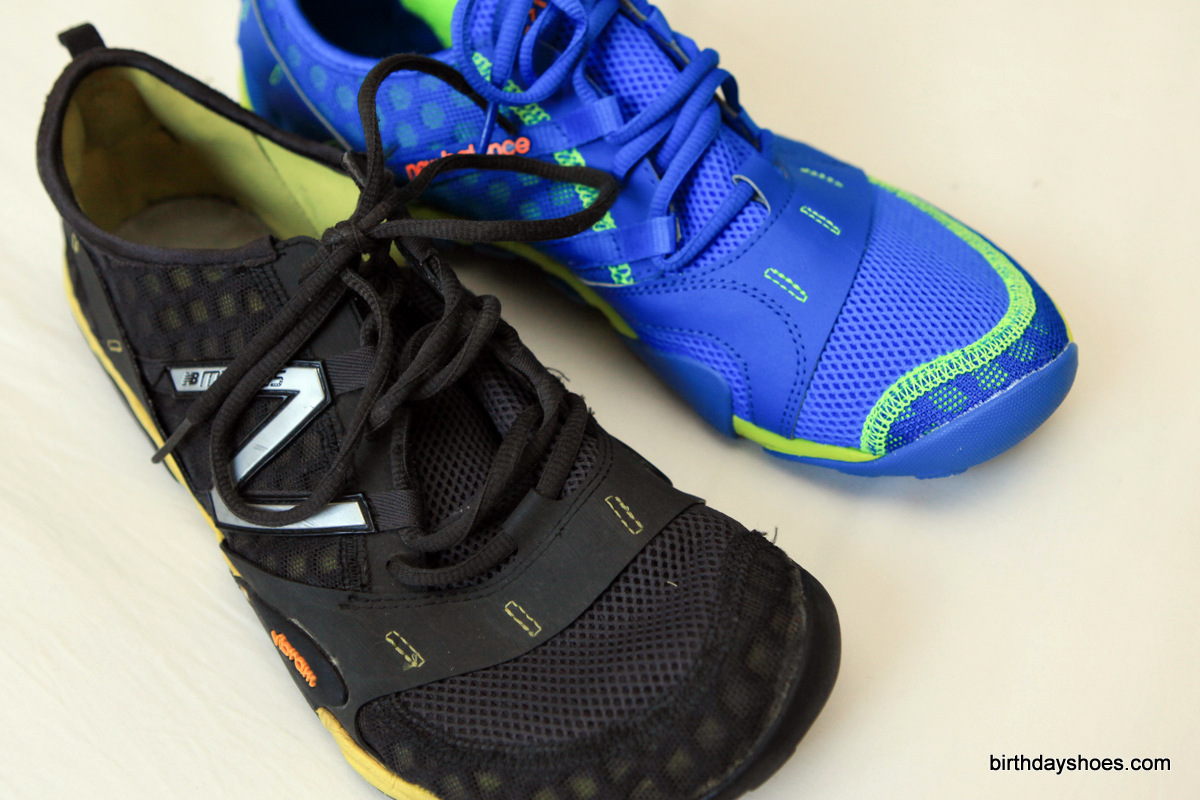 The original Minimus 10 Trail in black on the left compared to the updated New Balance Minimus 10v2 Trail on the right.

Pretty similar looking, eh? Note the thick strap across the midfoot is the most different piece.

The fit is excellent, the shoe is fairly lightweight, and the sole provides a decent ground feel—basically what you’d expect from this type of shoe. The Vibram lugged sole hooks up on various surfaces and terrains and would make an excellent shoe for meandering on the asphalt down to the trailhead for some off road running. There isn’t that much flexibility in the sole when compared to minimalist offerings from other companies and it should also be noted that (love it or hate it) there is a bit of toe-spring at the front, as the front of the shoe curves up slightly.

The Minimus Trail 10v2 is listed at 6.2 ounces and comes in the blue and green shown here, black and orange, and a more subtle black and silver.

It is currently available on the New Balance website for $110. 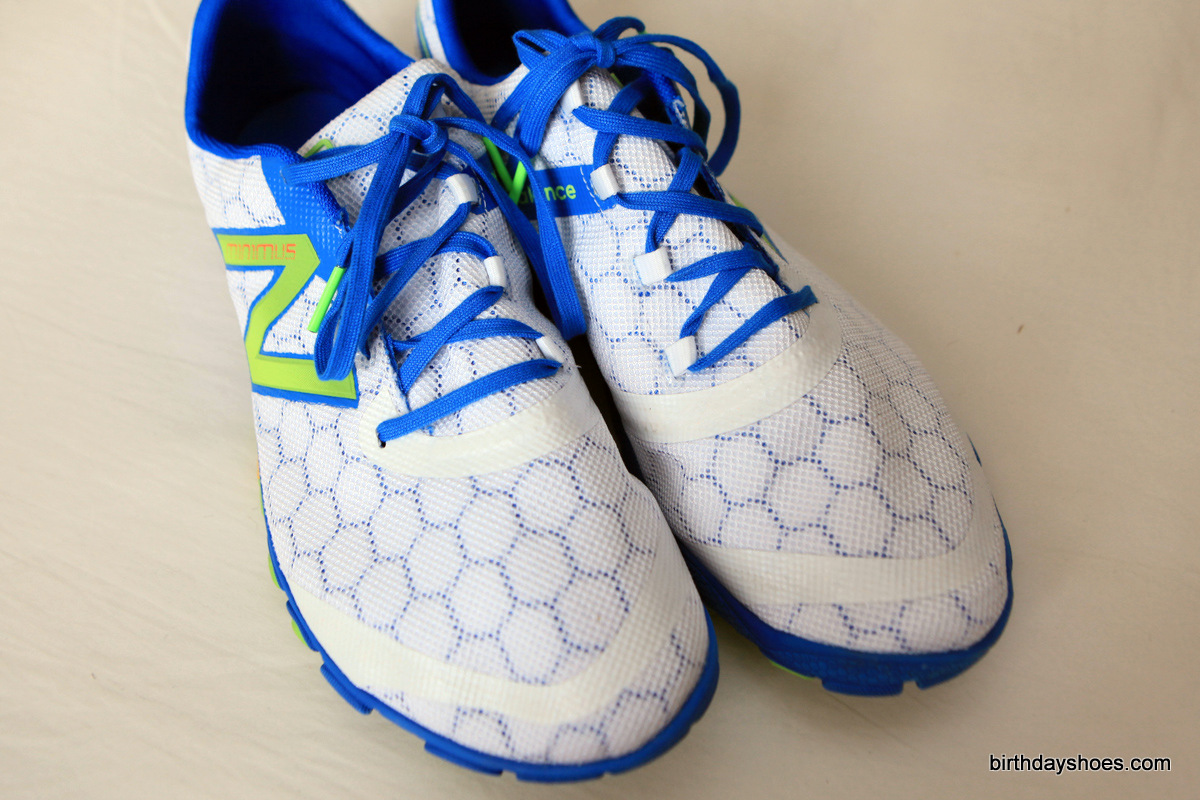 While I don’t have any experience with the original Minimus Road, the consensus I’ve heard is that they were nothing to write home about, and were generally just “ok.” If you are familiar with the original release, the Minimus Road 10v2’s biggest change is a move to a Vibram produced sole that has a design similar to the Trail’s. The upper has had a makeover and the now sports an attached tongue like you’d find on last year’s Minimus Zeros.

While I really love the Minimus Trail 10v2s for all aspects of use, I can’t really get behind the Minimus Road 10v2s for running. I think they look great casually with a pair of jeans, but I don’t think that New Balance got the fit quite right. The toe box is quite wide, which is great! They are almost as wide as some of Vivo Barefoot’s shoes, if you’re familiar with that company. I’m a size 11 across the board with New Balance, which is what I reviewed here, and while the length seems to be right, the whole upper generally feels awkwardly oversized. I like to wear my shoes pretty tight for running (thus my penchant for Vibram Five Fingers) and even when cinching down the shoe laces, I felt like there was still too much play. After one particularly short but fast treadmill run, I could feel tingling hotspots on the bottom of my feet.

The wide toebox is great for casual wear, but unless you have hobbit feet, I’d considering trying to size down a half size or give them a thorough test fit at your local running store. I also found that the instep was quite narrow, and I felt like I was landing on the inside of my foot with each step. This is one thing I noted about the Minimus Zero Roads and didn’t really care for until the wider 2E version was released.

Like the Trails, the Minimus Road 10v2’s sole isn’t all that flexible, but the ground feel was adequate and they seemed to hook up well at the track, on asphalt, and even on dirt.

The Minimus Road 10v2 is listed at 6.5 ounces and comes in the white and blue shown here, red and yellow, and a slap you in the eyeballs high-viz neon yellow and blue. It is also currently available on the New Balance website for $110. 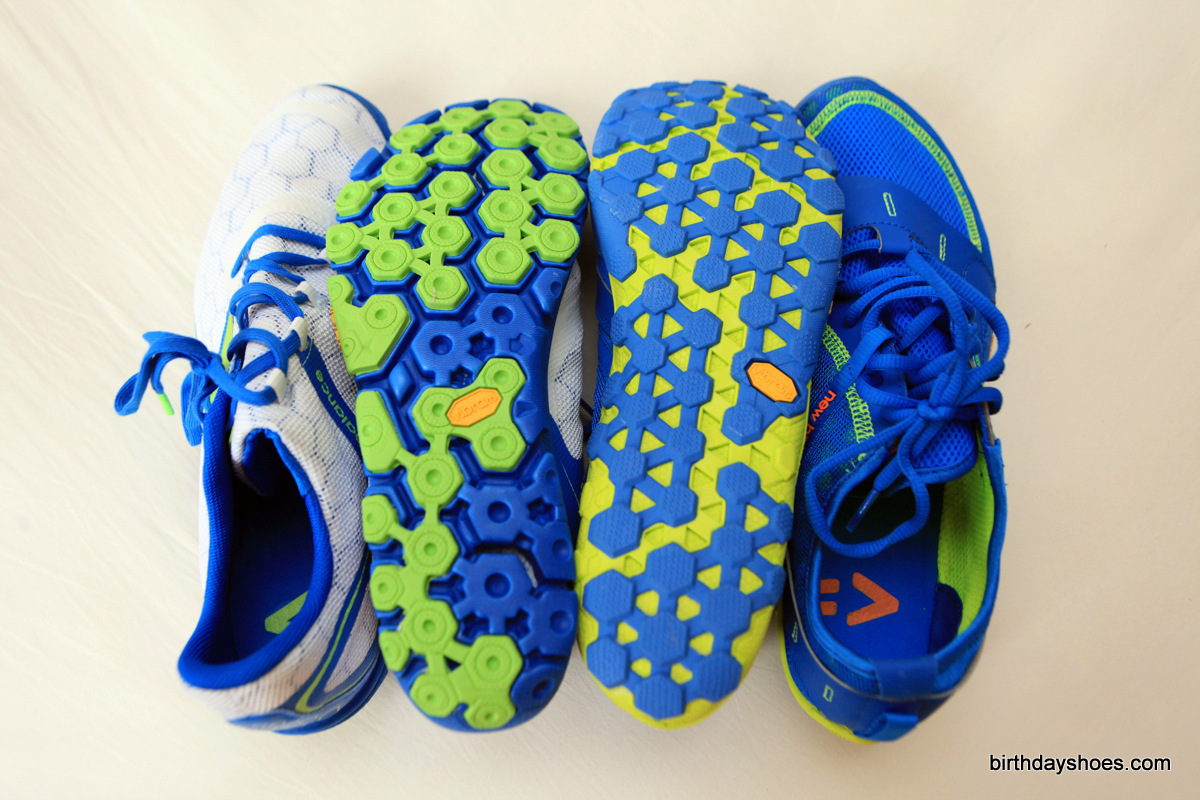 The updated Minimus 10v2 Trail is all of the good of the original Minimus Trail with none of the bad. It’s got the same great look and performance, and now it also has the right fit too. New Balance definitely got it right on these. Go out and pick up a pair if your aging Trails are in need of a replacement.

I’m not sure that the same can be said for the Minimus 10v2 Road though—I want to like them because I think they look pretty sharp and overall are quite comfortable. I just don’t think they are right for my foot when it comes to running, so these will definitely be a pair that you’ll want to try on before committing to purchasing.