More after the jump!

The NB Minimus Trail is a minimalist running shoe (or hiking shoe) that features a Vibram sole and a 4mm heel-to-toe drop. The awesomely bearded and absurdly fast ultramarathon runner Anton Krupicka, who is sponsored by New Balance, was a big influence on the development of these trail running shoes, too (You can watch Anton Krupicka sporting the NB Minimus trails in this promotional video). What’s exciting about the NB Minimus Trail is that it represents an alternative foot friendly “barefoot running shoe” to five toed shoes — and even the most vocal Vibram Five Fingers fan occasionally finds use for foot mittens!

That said, what does the NB Minimus Trail bring to the offering? How is it minimalist, exactly? What about that heel-to-toe drop, too; doesn’t that mean it has an elevated heel? And what about barefoot feel — will the sole compromise my ability to sense the ground? Good questions that I’ll tackle below! 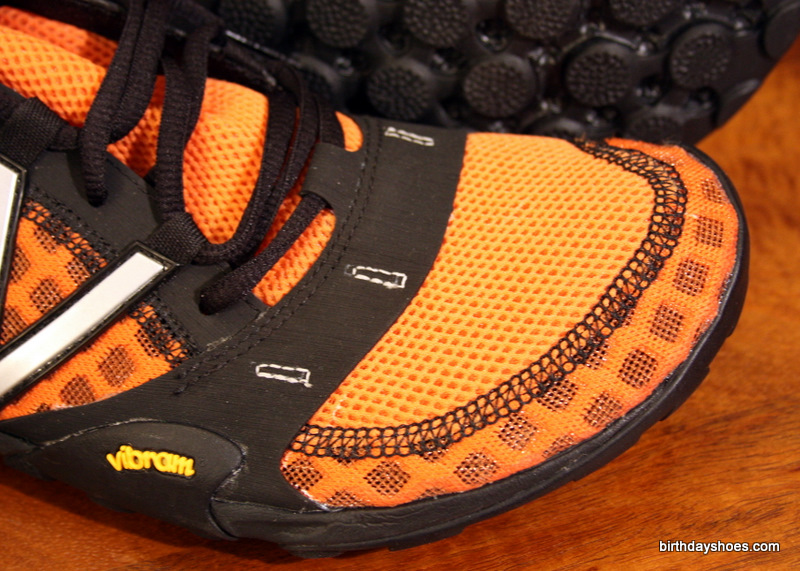 A shot of the New Balance NB Minimus Trail upper materials — three fabrics that all contribute some element to the overall minimalist feel or structure of the shoe.

Designing a shoe that is “minimally there” — a shoe that you can wear without socks and doesn’t feel heavy and constrictive on your foot — presents some interesting challenges. How do you give the shoe structure? How do you line the interior of the shoe so that it it feels nice on your bare foot? The great thing about designing a shoe within certain functional constraints is that you can intuit why the design came out the way it did, and with the NB Minimus Trail, these functional design considerations are pretty easy to understand.

You’ll notice that there are three main types of materials used on the upper of the NB Minimus Trail. There is an orange grid fabric that runs around the sides of the shoe and terminates around the very front of the NB Minimus Trail. Second, there is an orange mesh that makes up the tongue of the shoe and is above the forefoot (See above). Third, there are two spots where there are rubbery strips (technical term, I assure you!) — one wraps the heel (See here, here, and here) and the other, as above, over the instep.

Each of these fabrics serve a purpose. The orange grid fabric has a rigidity to it that provides an element of structure to the NB Minimus Trail: this rigidity lends the shoe shape, making it stiff at important points (e.g. thet sides of the shoe). The rigidity of the orange grid fabric stands in direct contrast to the orange mesh fabric which is as soft and flimsy as can be. Making up the tongue of the NB Minimus Trail (which is sewn in place on either side) as well as the bulk of the fabric above the forefoot and toes, this orange mesh fabric is extremely soft and stretchy. I kinda wish I could have some socks made out of this stuff, whatever it is.

The rubbery strips come into play in two ways. Around the heel, I suspect the strips act like rubber bands allowing the shoe to flex back at the heel. I don’t really notice them much at the heel. The rubbery strip that counts is over the instep at the front of the shoe. On first wear, the extra structure provided by this strip was immediately noticeable — and I’m not sure I liked it. In short, it really locked my foot in place putting some pressure on either side of my foot (specifically where the Vibram sole angles upward as you can see here and here). The benefit of this is that my foot doesn’t slosh around inside the NB Minimus Trail. The drawback was that I wasn’t sure I liked it!

That said, I’m happy to say that subsequent wears have “broken in” this rubbery strip and it’s plenty comfortable now. In fact, I almost wonder if it will just stretch to fit your foot over time (and stay that way). More testing will be required, but my initial uncertainty about this has turned into appreciation — I like the locked on feeling and recognize that this point was chosen to allow everything forward of this point to be free to roam.

And thanks to a good sized toebox, my toes can do just that!

As far as the inside of the NB Minimus Trail is concerned, there aren’t many seams to speak of. The walls of the shoe (the orange grid fabric spots) are backed with a smooth, black material. The insole has a shimmery, smooth feel to it and is not removable. I’ve worn the NB Minimus Trail almost entirely barefoot — the one time I tried socks, and this probably is more the fault of my socks, but I didn’t like the feel with socks (I’d say the same about socks with VFFs — I’ll do it if I have to, but I’m not a fan).

Overall, the upper of the NB Minimus Trail is a compelling design representing a compromise between designing a shoe with structure that stays in place on your foot but also allows key points the freedom they require (namely the forefoot and toes). I’ll also say that I really dig the aesthetic of these shoes. The orange is loud (though there will be more muted color options!) but with the black it just looks sharp. With the minimalist desing of the NB Minimus Trail, the shoes don’t look like your foot has been wrapped in padding. I dig the look! 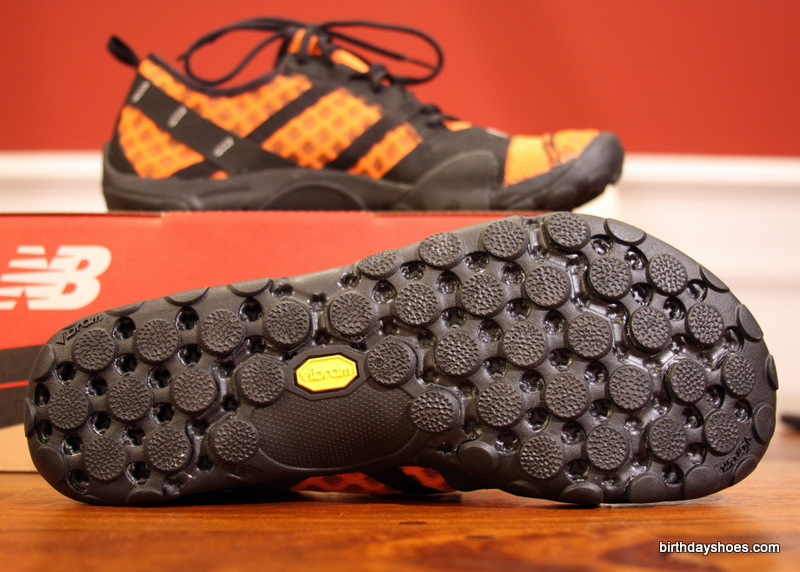 The NB Minimus Trail sole is made up of two materials — a foam foundation of some sort (EVA?) and a Vibram rubber outsole that appears to be three separate pieces. The foam foundation serves to provide some element of cushion, is slightly elevated at the heel (4mm over the front per the official measurements), while reducing overall weight of the shoe. It has a grid-like pattern over which the Vibram rubber outsole attaches in a molecule-like pattern where there are circles of rubber that connect to other spots via rubber bridges.

What’s hard to appreciate from the photo above is that the Vibram rubber outsole appears to be three pieces: each piece is an island (no bridges) relative to the other pieces. Reference this annotated photo of the NB Minimus Trail, first. You can see there’s the main piece that covers most of the sole from heel to midfoot (a) except for the arch (and by the way, there is no arch support to speak of in the NB Minimus Trail) (b), which is a separate piece, itself, and there is the third piece over the forefoot/toes area (c).

If I had to guess, I’d say this molecule design is intended to do a few things:

It’s a thoughtful design and I’ll talk about performance in a moment. As for the heel-to-toe drop, it’s very minor. Is it noticeable? Yes. Is it annoying, no not really. Does it compromise running form? That’s a complicated question! Read on.

I had a little barefoot fun while taking some of these photos.

I have, thus far, gotten to test the NB Minimus Trails running on pavement, a local trail, and then casually. Here are my impressions:

Pavement — to get to the trail I have to run on pavement. That said, the City of Atlanta ground down the main street that leads to the trail (see photo to the right), so it is gnarly and very uneven. It’s so uneven as to be uncomfortable to walk on in Classic Five Fingers and even worse in my Soft Star Grippy Roos. Running on this surface in Bikilas is fine and I think it’s unevenness actually helps train your form a bit. As for running on it in the NB Minimus Trails, I was able to maintain a forefoot strike without any problems and my form didn’t feel markedly different than it is while running in VFFs. I’d go so far as to say that I think the NB Minimus Trails would probably make a great road running shoe (Hard to say how they stack up against the NB Minimus Roads that Britt is testing).

Trails — The local trails I ran were pretty dry and leaf-covered. There were a couple spots of downhill, highly rooted areas where you just can’t really slow down and I was worried I might slip and/or bust and/or hurt my feet on some unseen rock or root. Fortunately, none of that happened. I had zero problems with slipping and when I did step on something pointy, the sole both kept my foot protected and still transmitted enough ground feel so that I could adjust and “fall into” my step (thereby lessening the impact).

I ran a couple steep uphill points (embankments) in the NB Minimus Trails, as well, and they performed solidly here, too. I need a good muddy trail run to see how they perform in less dry conditions.

As with road running in the NB Minimus Trails, I had no issues with forefoot striking. Overall, I have to admit that I was a bit worried the NB Minimus Trails would be too much shoe — muting too much feedback from the ground and, with the slightly elevated heel, causing me to heel strike. My running form is not awesome by any stretch (and I find I have to supplement some full barefoot running to dial in my gait); however, I was pleasantly surprised (though still skeptical — need more testing!) to find that I had no knee issues to speak of. This was over about a 30 minute run (though this is a normal run for me).

Casual wear and overall thoughts on ground feel — I really like the NB Minimus Trails for casual wear. I find the extra heel doesn’t negatively impact my gait (this still surprises) me — most heeled shoes just automatically leave me catching the ground at the heel when I try to walk as I would barefoot.

Given the extra sole, I’d say the ground feel on the NB Minimus Trails is definitely less than what you’d get with FiveFingers Bikilas or Treks (KSO Treks or TrekSport). It’s also slightly less than insole-removed Vivo Barefoots (of all varieties). That said, it is worlds better than my Nike Free Run+, which is to say it’s a strong step in the right direction.

Below is a gallery of photos to show how the NB Minimus Trail toe box (from above), forefoot, and heel stack up against some other minimalist/barefoot shoes (Bikilas, Huaraches, Nike Free Run+):

That said, so far the more I try the NB Minimus Trails, the more I like them. They represent a compromise between the ground feel and foot freedom you get with Vibram Five Fingers and having a minimalist, foot friendly shoe with a roomy toe box (Note: breaking a pinky toe running trails in VFFs is, unfortunately, a somewhat common injury — there are some cons to separated toes!).

The NB Minimus Trail is now out and available for purchase. Thing is, they can only be bought online via the New Balance store, so if you’re looking to buy online, you can find a pair of the NB Minimus Trails here for a hundred bucks. Otherwise, look for a local store to try them out!

Below is a photo gallery of other shots I’ve taken of the NB Minimus Trail. What do you think? Have I missed anything? Let me know in the comments! And stay tuned as I keep putting these things through the ropes!