Soft Star Shoes recently released a new casual “barefoot shoe” for men called the Rogue. It’s a slip-on, Vibram-soled, leather-upper and sheepskin insoled shoe that’s as crazy comfortable as it is healthy for your feet and your posture. It also has an aesthetic that can be paired with a lot of different styles, a pretty important consideration. In short, it’s a barefoot shoe for everyday wear that’s worth some serious consideration. Read on for the full review!

Soft Star Shoes is a perennial favorite of BirthdayShoes.com — not only are they family-owned outfit that manufacturers by hand all their products in their workshop in Corvallis, Oregon (read about it!) — but the shoes (and slippers) they make are fantastically comfortable. Why are Soft Stars so (generally) comfortable? Simple, it’s baked into the design: These factors combine to make a shoe your feet will be very pleased with. 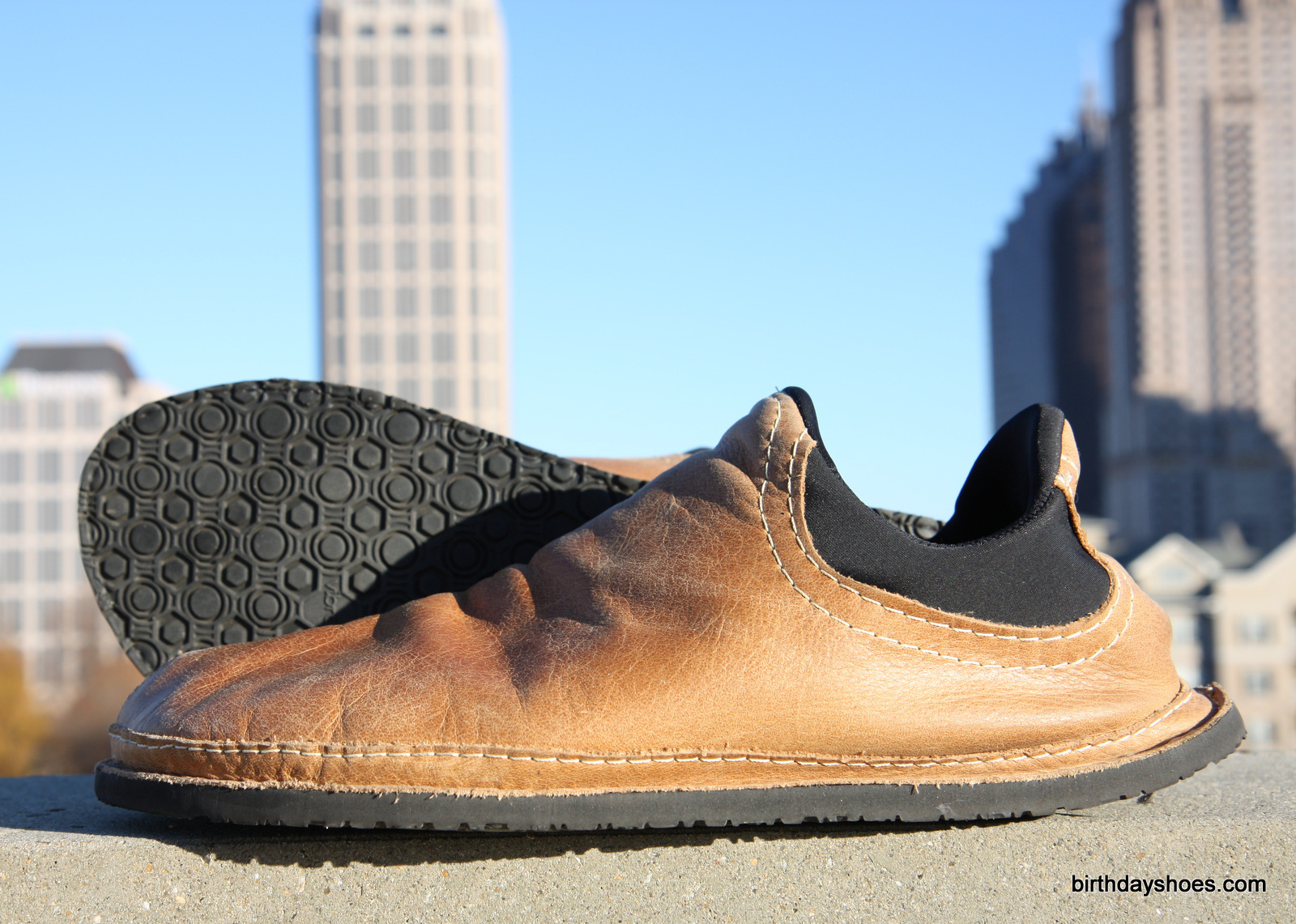 Soft Star Shoes sent me the Rogues in “Aged Oak,” which has a weathered leather deep tan finish (They also come in an Aged Walnut, which is a darker brown leather). Per the product page, these shoes are: Rogues have sizable toe boxes, no arch support, and are flat-soled. Take a look around the shoes:

The upper, insoles, and liner 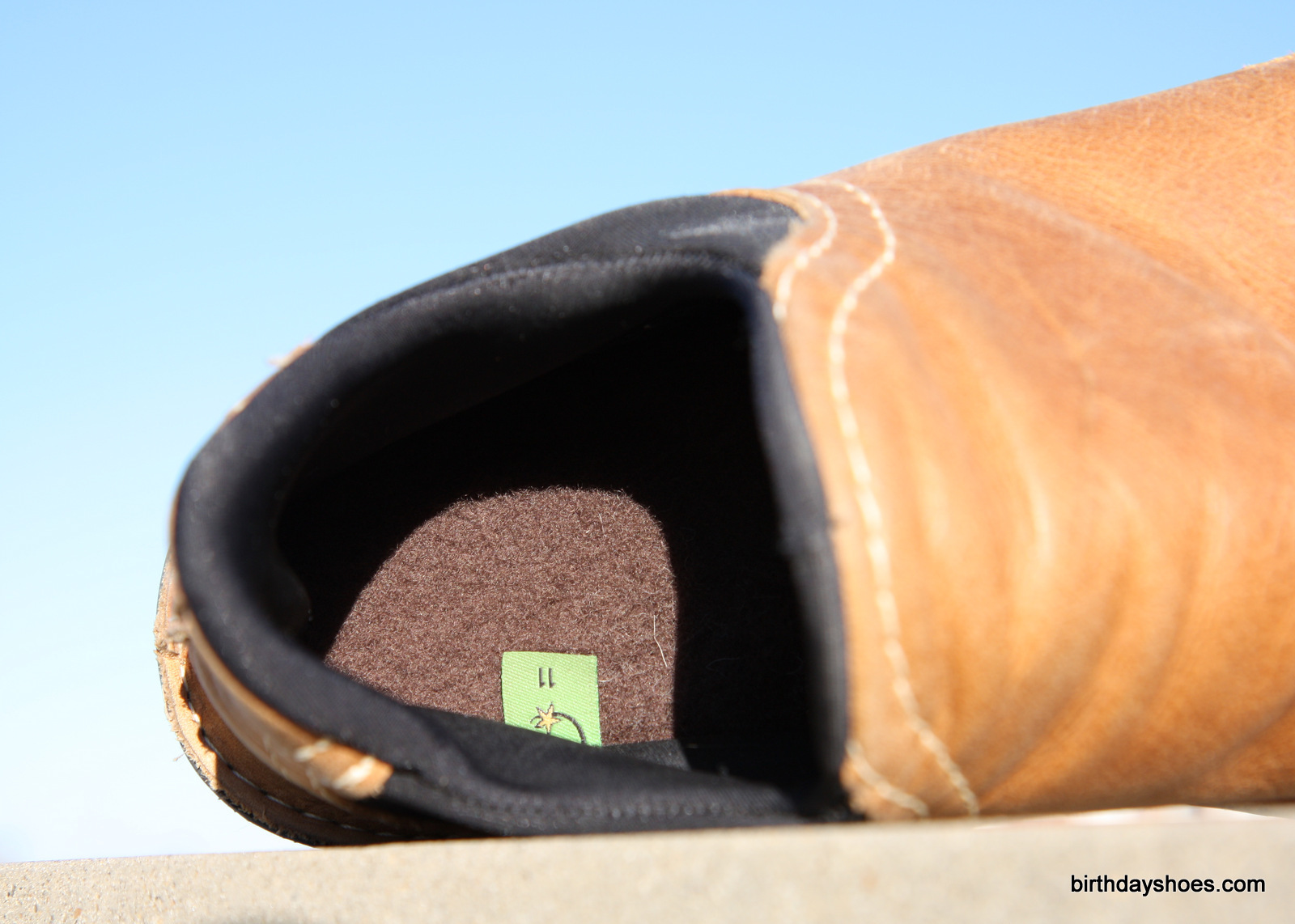 The short of it is that the uppers and insoles of the Rogue are incredibly comfortable. Let’s break it down. The leather ? the Rogues have a supple leather used for the exterior of the shoes. It’s very flexible out of the box and seems to comform to your feet over time. Note that your bare feet don’t ever touch the leather due to the Rogue’s Breathe-o-prene liner. You’ll see a stitch that runs no longer than an inch at the front of the Rogue. This basically allows for a larger vertical space for toe wiggle room. This keeps the uppers from squishing the big toe and also from creating these toe bumps that just look kinda a little off (as seen with the Soft Star Rambler photoed here) The “Breathe-o-Prene” liner ? looks like Breathe-o-prene is used most often for various braces for knees, ankles, wrists, etc. So how did this material function in a minimalist shoe like the Rogue? Incredibly well. The BOP liner does a few things for the Rogues. It adds some structure to the upper, fortifying the leather. It specifically allows a good bit of stretch as you can see in this photo. All this without feeling constricting. Against the skin, the liner is soft and non-abrasive. I often cite the original New Balance Minimus Life (Still one of my favorite shoes — and you can find them for $40-55 bucks if you click through to page 4 or 5) as having one of the best liners for bare feet in a minimalist shoe. However, the Breathe-O-Prene is even better. It lives up to it’s name by breathing well. Also, it adds a bit of thermal insulation on cooler days. I’ve not had the chance to wear the Rogues in temps above 75 or so, so it’s hard to say if they’d get “hot” in the summer. I’ll have to circle back on this in a few months. Sheepskin insoles! ? There’s a reason that Australian ugg-style boots are so popular and you’d be hard pressed to say it’s because of a pair of uggs’ sexy looks. It’s the sheepskin. I got sold on Soft Stars’ sheepskin insoles back with my first pair of Grippy Roos (By the way, I still wear my Grippy Roos some three years after that original review — can’t say that about many other minimalist shoes I own!). Sheepskin feels amazing on a bare foot, it wicks moisture away from the foot, and it also improves the connection between the shoe and the foot. How? By placing this fuzzy layer that helps create a connection between the soles of the Rogues and the foot — particularly when walking (so when the foot lifts, the sheepskin fills the gap between the hanging soles and your feet). Suffice to say I’m a big fan of sheepskin insoles and when I saw the Rogue shoes would have them, I had a feeling I was going to like these shoes. Overall, the upper of the Rogue makes for a decidedly roomy fit on my feet. It’s not tight in any way, shape, or form. Meanwhile, it’s not so loose as to feel like they’ll ever flip or flop off my feet. 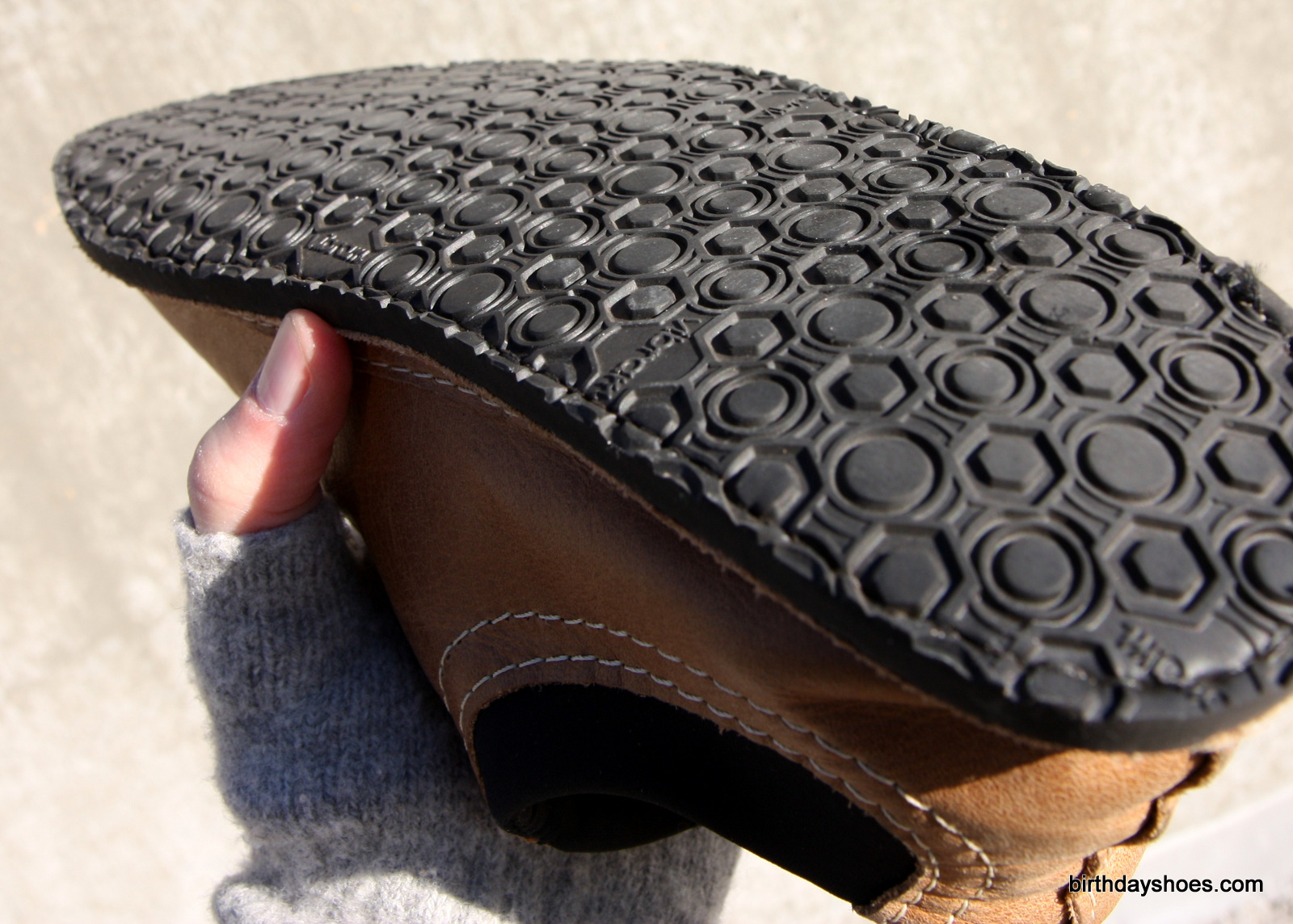 The Rogue shoes have an 8mm thick Vibram sole. That’s a fairly thick rubber sole compared to other Soft Stars I’ve reviewed (leather soled Roos I’ve reviewed have a 2mm thick sole in total!). However, the rubber is the foamy sort meaning that it’s not so dense that it’s heavy or firm. This means that I can still notice the grout lines from a tiled floor. Mind it’s not going to be as much ground feel as any < 4-5mm thick soled minimalist shoe, but it’s more ground feel than a pair of Trek-soled FiveFingers. As for traction, I’ve yet to have any slippage in the Rogues though I have walked on some lightly wet terrain. Without any real lugging, you’re not going to be trekking the Himalayas in the Rogue, but that’s not their intended function either. One aspect about the Rogues’ soles is that since the uppers are stitched to the soles on the tops of the soles, the sole necessarily extends past the foot on all sides. At most once a day (maybe once every other day) I find the front lip of the Rogues might “catch” on something. The Rogues lack toe spring, so if I’m not dorsiflexing my toes enough (though it is easy to do in the Rogues as seen here), the lip can catch on uneven terrain and sorta trip you up. Well, “trip” is probably a strong word here, but it can just catch. Also, the extension of the sole at the rear of the Rogue has some interesting implications ? namely, it serves as a “catch” for overlong jeans and pants. You’ll see that better in some of the pictures below in the “looks” section. Overall, the soles are going to provide you with a ground feel that’s comfortable all day long.

The first thing I did on wearing the Rogues was ask my wife what she thought of them. I don’t remember exactly what she said, but it was something like “yeah they’re fine.” I’ll take that, particularly when her first reaction to Soft Star Ramblers was … well, less than positive. I like the Rogue aesthetic. In the Aged Oak leather, it has a clean look that conveys comfort and a minimalist style. The leather stitching at the base of the shoes adds some dimension to their look. The vertical stitch on the front of either pair also makes the shoes have a more traditional shape at the front. If I had my “druthers,” I’d probably figure out a way to make the uppers stitch to the soles in a way that doesn’t have a lip (as is the case with Roos or RunAmoc Dashes). However, in practice, the lip doesn’t detract as much from the overall look as I thought it might. Beauty is in the eye of the beholder, and as casual, leather barefoot shoes go, I think the Rogue is one of the better options out there. Paired with non-skinny jeans or even khakis, they seem to “fit.” And for some reason, I don’t think there are a lot of BirthdayShoes readers with legs that can fit into skinny jeans. Take a look at the photos below to get a better feel for how the Rogues pair up with different pants. Casual jeans. 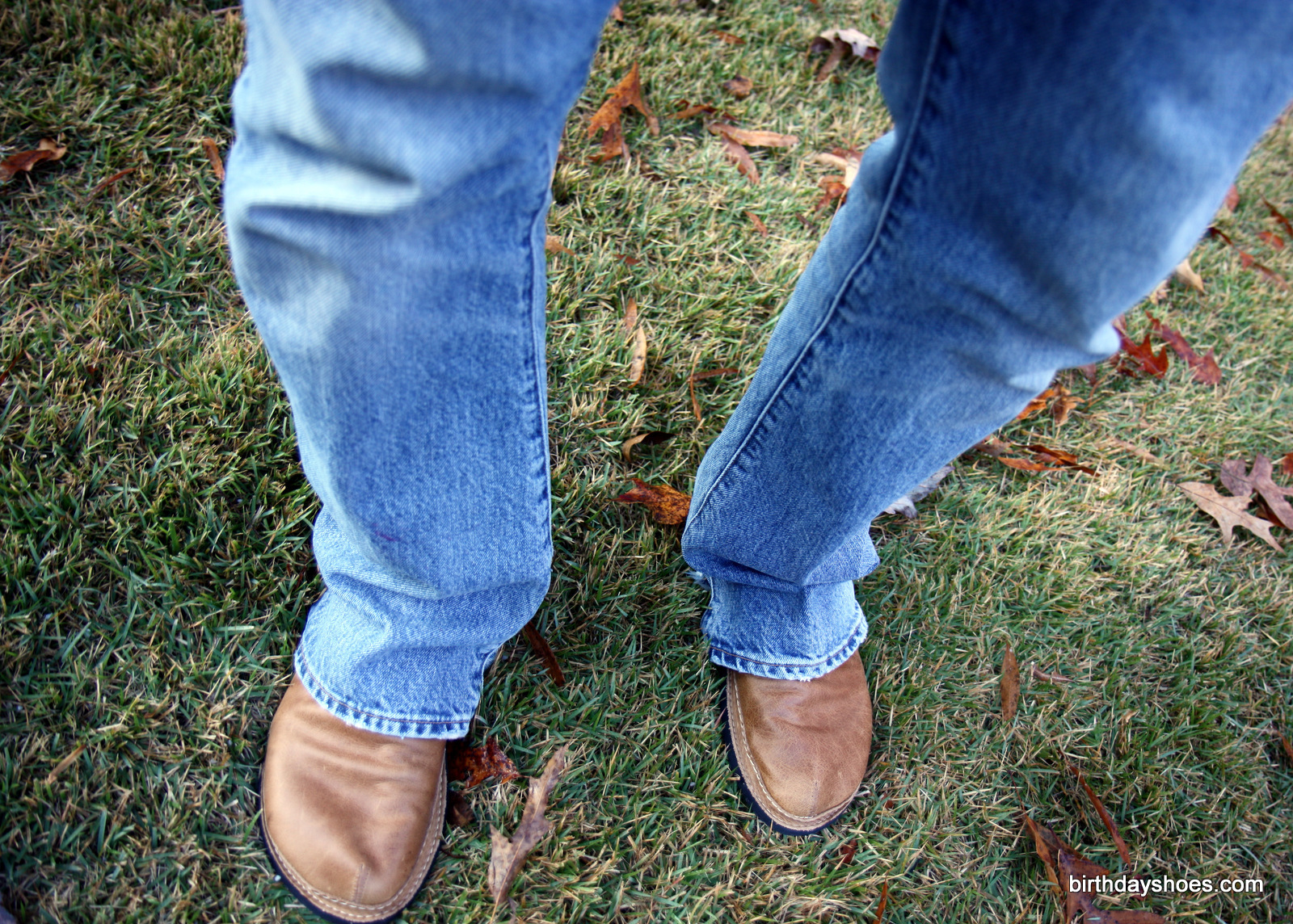 I tend to cut my casual jeans on the sides to make them lay down over my shoes. Don’t know if others like this look, but I do and have for some time. The Rogues look good in a pair of bootcut jeans that are decidedly worn-in. Check it out: Nice jeans. 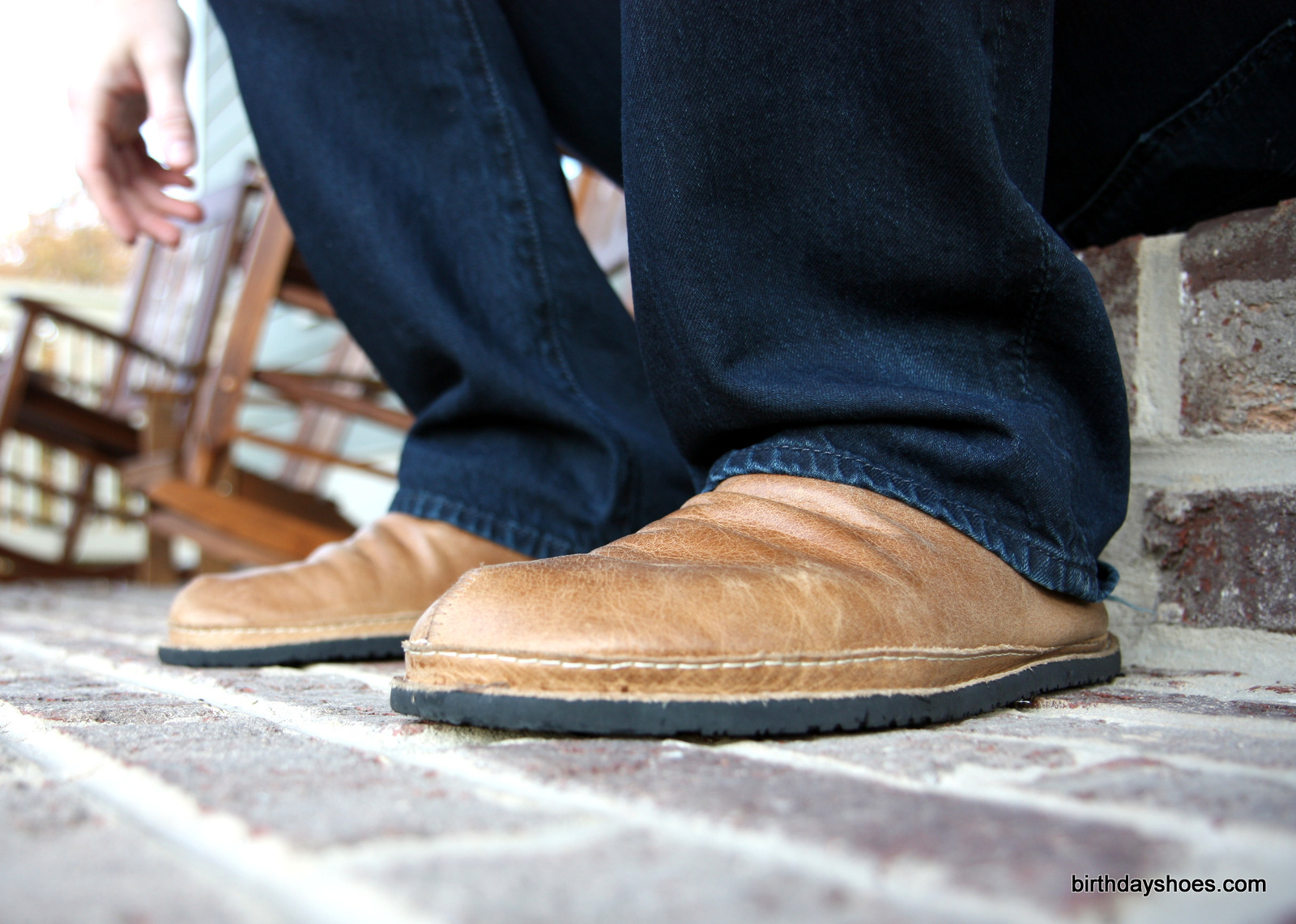 The Rogues also paired well with a pair of non-cut, dark washed Gap bootcut jeans I own. You can see that in the photos below. I’ve also worn them with straight leg jeans and they work well enough there, too. Khaki pants. 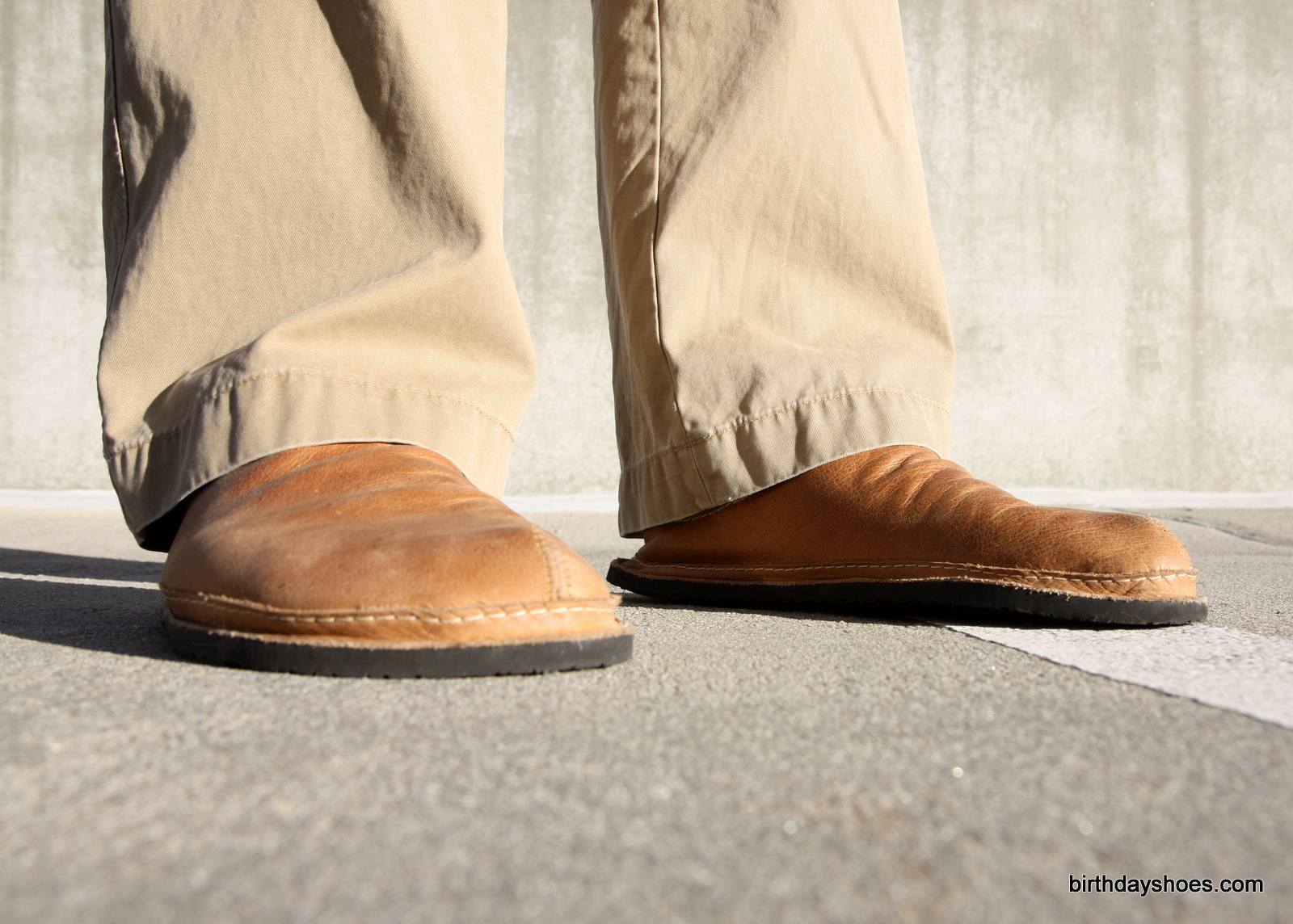 Finally, paired up with Khaki pants the Rogues looked good. Check it out:

Overall, there is a lot to like in Soft Star Rogue shoes. I’ve a feeling they’re going to be a shoe I return to frequently in the coming months and perhaps even years. It’s hard to go wrong with a pair of minimalist shoes that feels so great on my feet, can be worn all day without discomfort, and fit well with my sense of style. I can’t say the overall feel is one I’ve had with any other pair of barefoot or minimalist shoes I own, and it all adds up to having a pair of shoes you’re very likely to forget you’re wearing. The main drawback I found with the Rogue is just the extra lip. I just wish it wasn’t there because it detracts marginally from the function (e.g. the random catching of the lip when walking) and marginally from the aesthetic. Re-made without the lip, I think the Rogue would be just about perfect. I guess there’s one other drawback: the Rogue retails at $125, which isn’t cheap. I’d chalk it up to the fact that they are made from high-quality materials (leather, sheepskin, Vibram rubber, and a medical grade liner!) by hand in the U.S. By elves. I mostly wore the Rogues without socks. However, I was happy to find that with socks they were still super comfortable. You don’t get quite as much sensation from the sheepskin insole when wearing socks, but socks pair up with the Rogues no problem. A note on sizing: while I’m typically a 10.5, Soft Star doesn’t offer their shoes in half sizes, so I’ve always sized up to 11. This hasn’t ever been a problem. While I could see the Rogues being even better in a true 10.5, the extra length just adds a little more wiggle room for my toes. I think I covered all the bases but if I missed anything, hit me up in the comments! Do you have the Rogues? Love Soft Star shoes? Let’s hear it!