I short while ago I got a pretty incredible user story from Stuart, who recently completed a multi-day “Jungle marathon,” which is more of an ultramarathon spread across a few days where you haul all your gear with you for the trip.

He completed it in Spyridon FiveFingers — much to the surprise of the race director and others who warned against doing just that.

I’ll stop there and just encourage you to read on!

I have just completed the 2012 Jungle marathon in Brazil, and in doing have become the first person ever to take part in and finish this grueling event wearing a pair of Vibram Fivefingers. With the help of a pair of Spyridons I even managed to finish the world’s toughest endurance race (as listed by CNN) in 5th place overall. I did not wear toe socks at any time either during the race.

The race is a 6 stage, 7 day self supported foot race. Runners have to carry all of their food, clothing, hammock, sleeping bag/liner, medical kit and other mandatory kit, as well as 2.5 litres of water at every checkpoint. My rucksack at the start of day one weighed about 12.5kg. The longest stage on day 5, is a non stop 108.5 km ultramarathon. The total distance covered was over 255km across swamps, dense jungle, mangroves , sandy beach, creeks, rivers and dirt roads (Full details at www.junglemarathon.com).

Before flying out to take part, I wrote to the race director who advised me not to wear Vibram Fivefingers (VFF) , suggesting they might not offer enough support for such a long distance race. I also emailed a previous competitor, who is also a physiotherapist for her advice on wearing VFF. Her response was ‘ …Fivefingers will be a disaster….they will not offer your feet the support they need……they are not designed for such long distance running…..and they won’t have enough grip to help you stay upright on the seriously wet and muddy terrain, particularly on the severe ascents and descents’.

Despite this advice I opted to go with my Spyridons. Thanks to the clever cocoon lining in the sole I had every confidence they would give my feet enough support to avoid injury to the sole of my foot whilst running through the dense jungle, where the floor was covered in sharp spiky objects as well as spiky stinging insects like scorpions. I felt no impact at all underfoot and the Spyridons’ grip was more than adequate to cope with the muddy terrain. A week before going to Brazil for the race I wore my Spyridons to hike up Snowdon, the United Kingdom’s third highest mountain. They were great for that too, although whilst walking across large, wet slightly tilted rocks/boulders I could feel my feet slip slightly, but I think that may have happened in walking boots also. The hike up to the summit left me in no doubt that my Spyridons were the right choice for the jungle marathon.

The tough material used for the upper is still in exactly the same condition it was before the 255km race. There are no tears or cuts at all to the upper of both shoes, and the soles too are also damage free. The only minor sign of wear and tear is a very small section of the material on the outside of one of the big toe pockets, where it has very slightly come away from the sole. But in order to see it you have to look closely , and after such a long way in some seriously aggressive and tough terrain, including deep bogs and swamps I think that is extremely impressive and shows how robust the Spyridons are.

I did have a concern about using the Velcro strap version as I wondered how it would hold up in the swamps and bogs. Some of the bogs were up to 1km long and over knee deep with mud. My concern was whether the strap would stay secure and tight when pulling my leg up out of the mud as I did not fancy losing a shoe. However, the Fivefingers are designed to fit snugly to the foot so although on a couple of occasions the strap came undone the shoe remained firmly in place on my feet. But this did not happen during every swamp or bog , and there were many.

Every single day of the race I had several other competitors asking me about my choice of footwear, often questioning whether I would be able to finish the race. My reply was the same every day, that they were extremely comfortable and I felt no pain or any objects under foot at all. They looked amazed but also looked very impressed. Many of them said they were going to try using Fivefingers after the event.

Perhaps even more impressive than the toughness of the shoe, is the comfortableness of the Spyridons for running and hiking. After running 255km I did not have a single blister on either of my feet, and that is despite starting and finishing every day with wet soggy feet. The only sores I had on my feet were between a couple of my toes caused by sand getting between them during the 108.5km long stage. I had already run several miles on sand during the previous four stages without any problems with the sand at all. During the long stage I think it only happened due to having had wet feet since 4.30am at the very start of the stage when we started with a river crossing, and by the time I ran on sand I had been running with wet feet in 35 degree heat in almost 100% humidity for over 12 hours. Perhaps if I had put on a pair of toe socks I may have been able to prevent the sores at all but as they were only minor I opted to just carry on to the finish.

The race director, who advised against wearing VFF, saw me on day four at the first checkpoint and said she couldn’t believe I was still wearing them and going so well. She said every day she expected me to pull out with trashed feet and after the race told me how seriously impressed she was with me for finishing in 5th place and wearing Fivefingers for the entire race.

This was taken after I flopped having just crossed the finish line of the 108.5km ultramarathon long stage on day 5. I had already covered 123km in the previous 4 days and having started at 4.30am I finally finished the stage at 1am, managing 4th place. I think it’s fair to say I was pretty exhausted… But the fivefingers did a great job of getting me through.

I had reservations myself about wearing Fivefingers, and I don’t think my Bikilas, KSO’s or Classics would have been up to the task. But thanks to the Spyridons trail running qualities I was able to wear them.

In my opinion the Spyridons are the most comfortable running shoe I have ever worn. I have run over 20 marathons on both road and off road, and several ultramarathons including multi-day events in the Sahara, Atacama, Himalayas and Scottish highlands, as well as 100km and 100 mile non stop races. I have worn several different brands of running shoes, some of which have left me with horrendous blisters. Some have been okay when it comes to blisters, but even if I have finished blister free I have always felt ‘hot spots’ which is the start of a blister. I have never worn a running shoe that has left me with zero blisters and zero hotspots.

I would have no hesitation at all in recommending Vibram Fivefingers to other runners, and for trail/off road running at the moment in my mind there is no better option than the Spyridons. 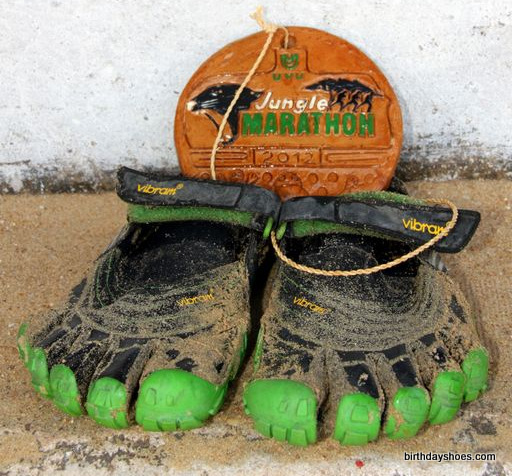 It’s great to hear a pair of Spyridons were up for this serious beatdown.

Anyone else itching to do a jungle marathon now?

Thanks for sharing, Stuart!