Vibram has snuck one on us here in the U.S. — well in advance of a Fall 2012 release, it seems that at least one retailer (REI) has gnabbed the laceless Spyridon FiveFingers. Yeah, they’re out right now (for $110). You’ll recall that these puppies were slated to roll-out later this year in the U.S. — this, despite the fact that Europe was going to get them in the Spring. Well, how that’s actually gone down is that Europe did get them first — say a month and a half ago or thereabout. And I guess as things go, they went ahead and got some across the pond in short order. So in the interest of timeliness, I’m going to do a “first look” at these laceless trail-minded five toed shoes. As first looks go, I’ve only had the chance to hike for an hour or two in them (as well as knock around in them to get a feel for them). But you can at least take a look at what you’re going to get should you pick up a pair. Read on!

What better place to start than the official description of them from Vibram?

The Spyridon offers the same great trail running experience as the Spyridon LS [Ed. note: read our Spyridon LS review and Spyridon LS vs. KSO Trek comparison] providing the perfect balance of “foot feel” and protection on rugged terrain. With Vibram’s 3D Cocoon technology, the Spyridon has a multidirectional sole, which allows for impact protection from stones and debris with minimal weight. The Coconut Active Carbon upper breathes naturally using 34% post industrial coconut fiber. It is finished off with an adjustable hook-and-loop closure ensuring a secure fit and reflective applications for safety after dark.

I’ll get to the sole of these shoes in a minute, so hold that thought. If you remember the iconic, classic KSO FiveFingers, the lace-lost Spyridons upper design is going to look familiar, though rebooted in subtle ways and “done up” with extra styling. The Spyridon utilizes the “hook and loop” closure that wraps around the ankle and secures over the upper instep of your foot with Velcro. The strap loop can slide back and forth at the heel (the original KSO’s was sewn in place). The upper fabric is coconut fiber, which is a thin flexible material that seems to breath well and has some odor-resistant properties. 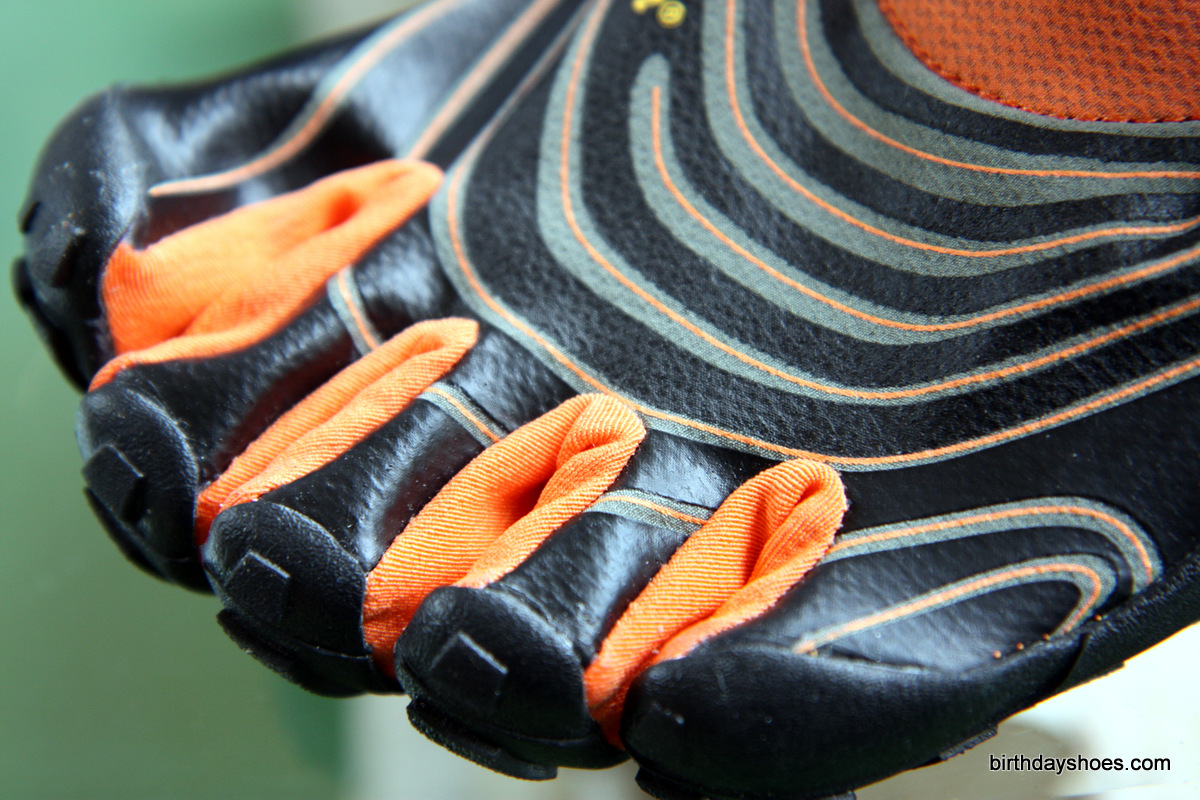 One thing to note about the upper and the painted on semi-circle lines of the Spyridon. There are two different aspects to this. For one, there is a thick application of some sort of paint or painted on rubber (or something durable) that is on each toe. This is probably to prevent blowing out the toes if they snag something. This is not the same as the paint that runs in parallel lines on the instep. You can see the two paints in the photo at the right. It should go without saying that black can heat up quickly in full sun — and it definitely does here. As for breathability, I didn’t notice anything too off about breathability in my intial testing. The Spyridons aren’t waterproof or really water-resistant. The water-resistant FiveFingers are coming in the Fall. Water will get in them immediately at the toe pockets. Here are a slew of photos of the “dark olive/black/orange” Spyridon FiveFingers:

The Spyrit of a Five-Toed Sole. 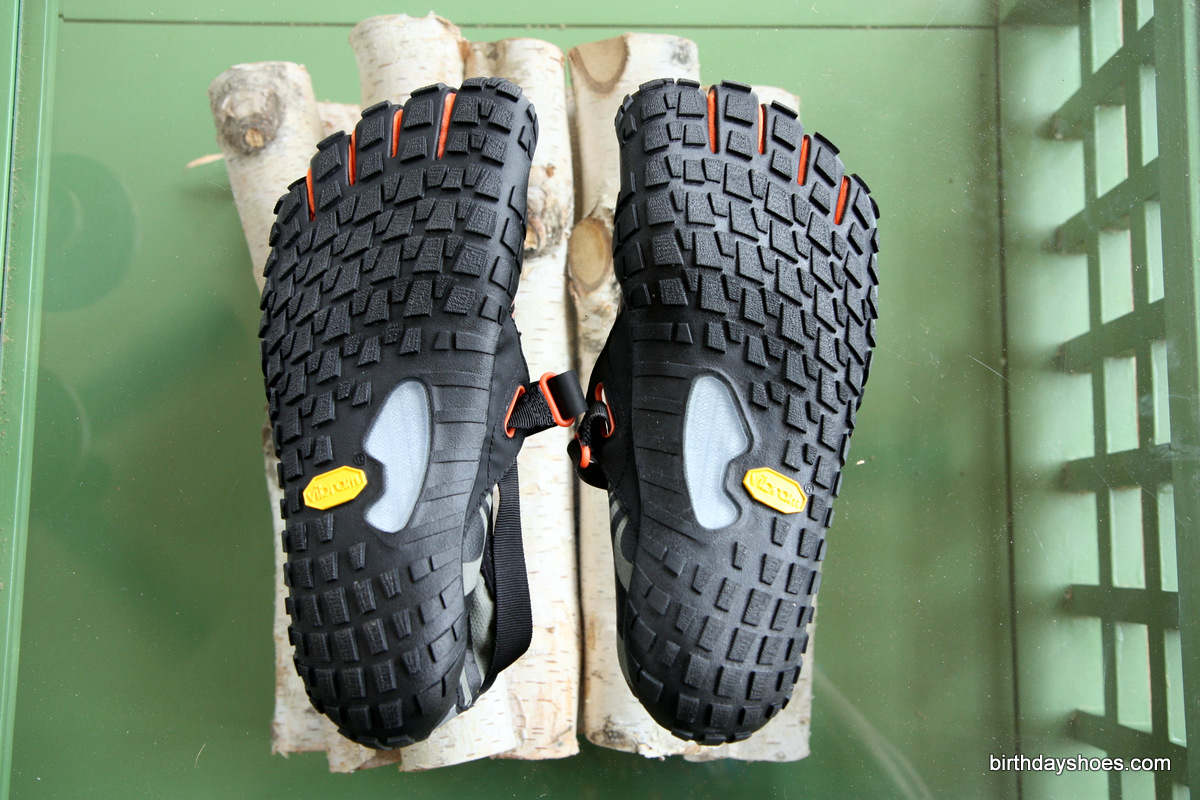 The soles of the Spyridon FiveFingers look like a mountain biking tire in the shape of a foot and feature a nylon mesh built into the sole which acts to diffuse sharp forces from rocks, taking a bit of the sting out of landing on an errant piece of gravel on the trail. 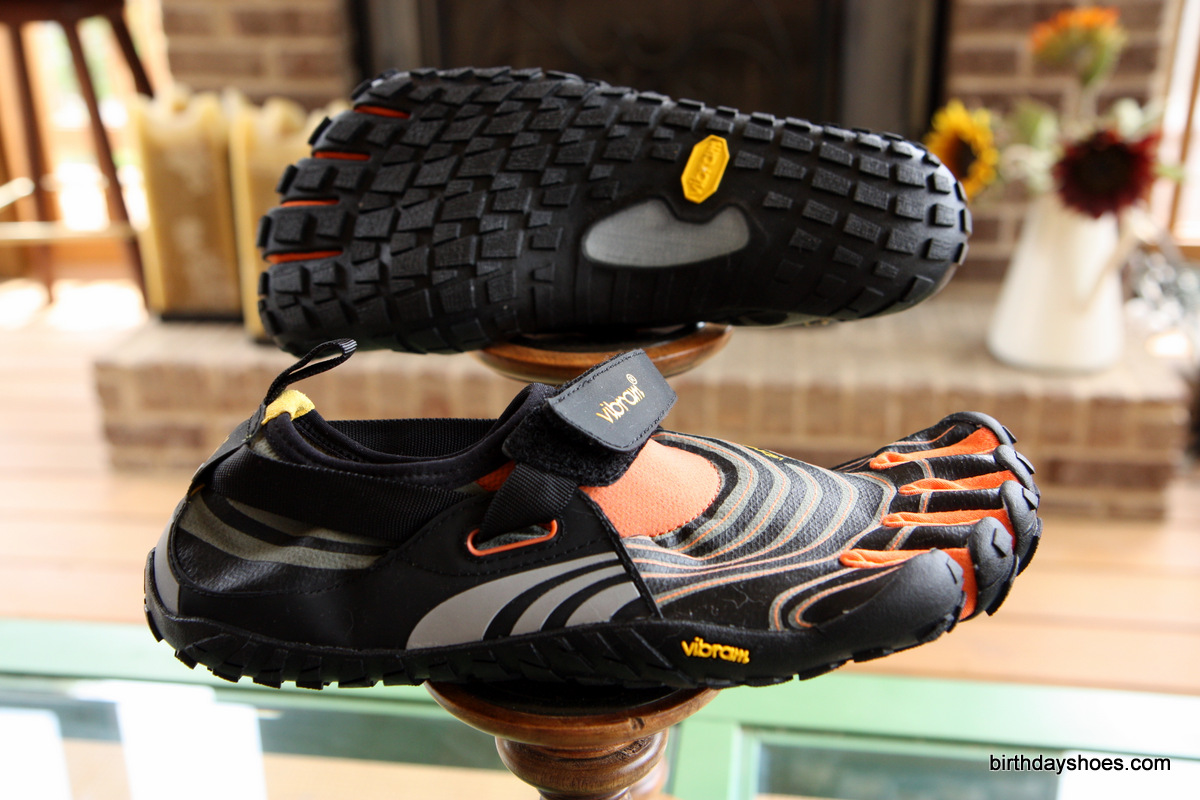 With the Spyridon models, it’s all about the sole — Vibram rubber with a knobby tread that is reminiscent of a mountain bike tire. The special sauce of the Spyridon sole is on the inside — it utilizes a lightweight nylon mesh (you can see it through the clear arch rubber) that disperses sharp impacts from rocks, roots, or whatever, effectively muting sharp pains from “pointy things” on trails. More subtly, the Spyridon sole just sorta glazes the ground with a barefoot-feel-blurring sensation. It’s as though you still have ground feel but it’s less acutely felt. Make sense? The sole is fairly flexible — it’s no SeeYa — but it’ll bend and move dynamically with your foot. Here are some photos of me flexing the sole in hand:

A look at the Spyridon sole’s flexibility. It’s a little stiffer than some other FiveFingers soles, likely due to the embedded nylon mesh which acts to disperse forces from sharp rocks.
And you can see how they flex on your feet here: Personally, I really like the Spyridon sole from my experiences with it on the Spyridon LS. It feels a bit less stiff overall and lacks some of the harder lugs (particularly at the toes) of the Trek sole. 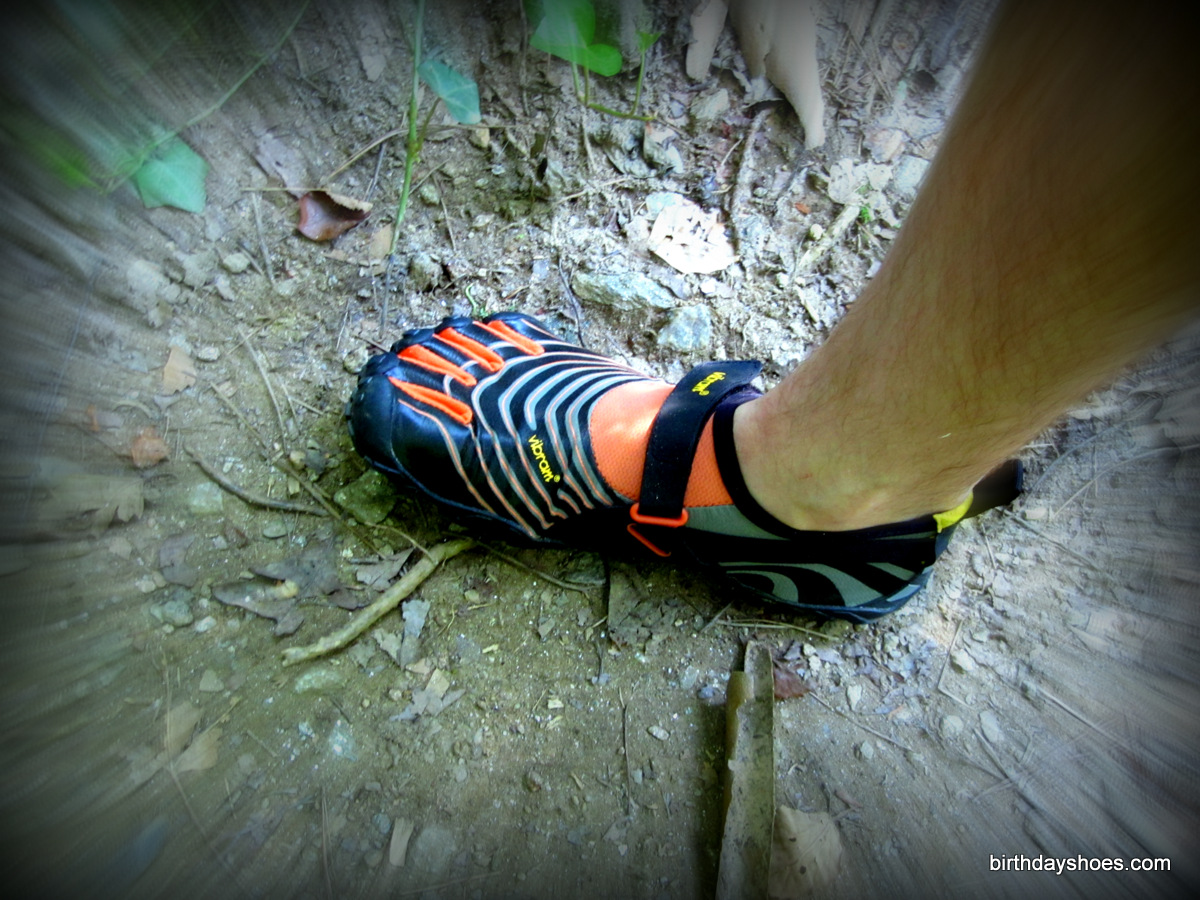 It was a brief outdoor hiking test, but hey this is a first look and not a review!
I managed a short local hike in some nearby creeked woods with the family over the weekend for Father’s Day. The trails were dry and a mix of dirt and sand. The Spyridons performed as expected, kept out sand and dirt a la the KSO-like ankle wrap, and while I was carrying a small pack that included a 15 lb. baby and/or a shoulder-riding 30 lb. 3 year old, I didn’t have to concern myself too much with errant sharp stones or roots. That said, I did trip over an errant exposed bit of steel rebar. Yikes. Thankfully I was able to prevent a fall (with said three year old) and the rubber toe coverings seemed to keep my Spyris pristine. Photos:

It’s too soon for me to make a call on the Spyridons. A full-blown comparison between the Spyridon LS and Spyridon is certainly in order, as well as further testing and review. For now, what I’ll say is that if you don’t see a need for laces, prefer a simpler upper, or are interested in replacing your aging KSO Treks or Trek Sports, the Spyridons are going to be high on your consideration list. While I’m on the fence between the leather KSO Treks (particularly since you can get them for $95) and the Spyridons ($110), I’d unquestionably grab them over the Trek Sports. If you’ve been waiting to pick up a pair of the Spyridons, right now the only retailer who seems to have them is REI though I expect that to change soon. Also, they’ll be available in a wily black upper and bright green-soled “Hulk” version that look incredible. Are you interested in the Spyridons? Let’s hear it below! 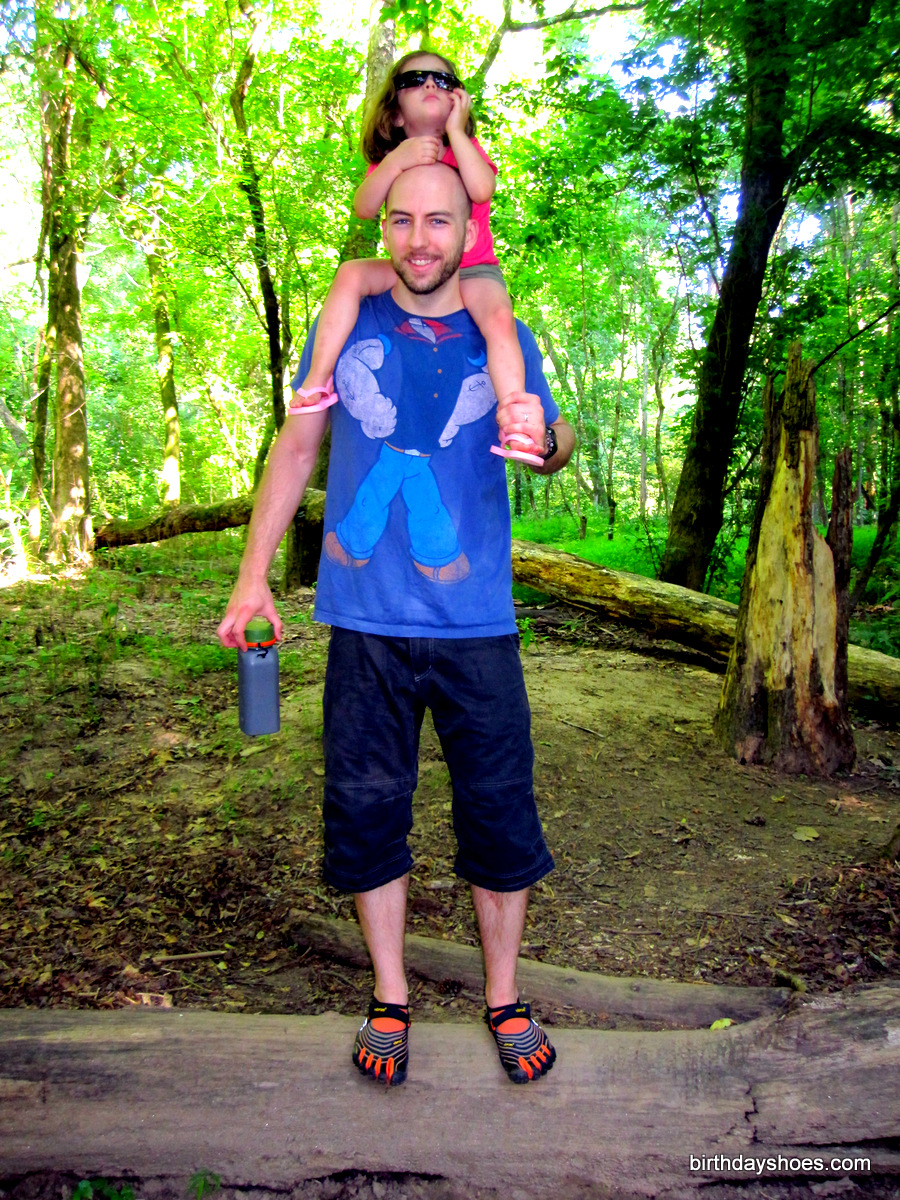