The Skinny on the FiveFingers Moc and Performa a.k.a. “Glove” for men and women

On the shoulders of the recent news about new models fivefingers Bikila (arriving in 2010) and fivefingers Speed (a European 2010 release), I have learned some information regarding the new models Vibram fivefingers Moc and Performa which should pique the interests of yoga, Pilates, and martial arts advocates (as well as all VFF fans!) who desire even greater foot and toe flexibility.

The Moc and Performa are the male and female versions, respectively, of what we have been thinking of as the fivefingers “Glove,” as it was called on voycontigo.de back in June.

On the Vibram FiveFingers Moc

According to sources close to the subject, aside from merely having gender-specific names (and likely color options), the Moc has a slightly higher “vamp*” than the Performa, which lends it a slightly more masculine appearance. If you’ll revisit the original picture of the Moc, you might notice the front lip (vamp) does appear a bit longer as compared to Classic fivefingers: 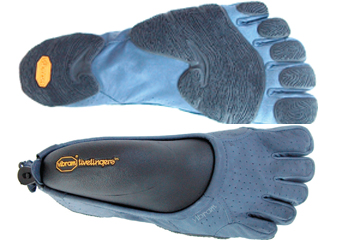 It’s a subtle difference, but if you gauge based on the length of the big toe pocket (or the second toe) relative to the termination of the vamp and then look at a pair of Classics and make the same comparison, you can tell a small difference. As I think about it, I think this small change could make a fairly substantial difference from an aesthetic point of view. Of course, it’d be nice to see some Mocs on an actual foot!

On the FiveFingers Performa

What about the Performa? Thankfully, the folks over at KayakShed have posted a handful of photos and news taken from the recent Outdoor Retailer Trade Show that went down last week in Salt Lake City, Utah. Here’s a snapshot of what KayakShed had to say:

We know many of you use your FiveFingers for yoga and pilates and Vibram clearly sees that too as there is an all new shoe specifically for indoor use. The Moc and Performa have a very lightweight, minimal sole on the bottom and very buttery leather on the top. These should make for a much more exciting holiday gift for all those folks you were thinking of getting slippers for! 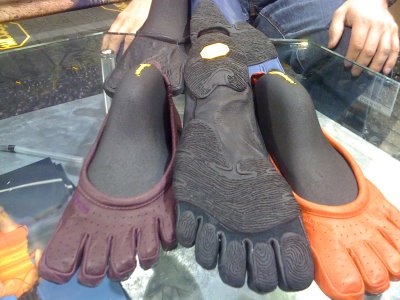 What you might notice about the photo above is that the vamp doesn’t go as high on the purple and orange models as in the earlier photo of the blue fivefingers Moc**.

The “buttery leather” referred to in KayakShed’s description is the kangaroo leather. Since most of us aren’t familiar with any leather other than the kind we get from cows, it’s worth noting that Kangaroo leather is analogous to cowhide. In Australia, kangaroos free range and are used both for their meat and their hide (source Wiki). Word on the street is that kangaroo leather is known for superior breathability and is also sweat and salt resistant.

Oh and the Moc and Performa, despite using leather, are both still machine washable!

On the soles of the Moc and Performa

As you can see, the soles of both the Moc and Performa are the same. Employing an all-new pod-like sole design consisting of (as I count them) seven separate mini-soles should allow for increased flexibility between the various points of impact on the bottom of your feet. Though they are intended for indoor use only, I’m excited at the potential for increased toe and foot flexbility. Perhaps in the Moc I’ll be able to easily pick things up off the floor with my toes, which though possible in existing VFF models, is still pretty difficult.

Available by mid-October for $110

The Moc and Performa are slated to be available for purchase by mid-October. But who knows, maybe we’ll get lucky and they’ll show up earlier.

Finally, you’ll have to head over to the KayakShed blog for more information on what they saw at the trade show including a photo of a new color combo for men’s KSOs, black VFF Sprints for women, and another photo of the Trek. Thanks, KayakShed!

* Refers to the front upper part of a shoe, as in that which covers the front top of your foot!

** You have to look very carefully at this photo, but in addition to the three models in the foreground, which are purple, blackish (upside down, sole up), and orange, you can barely make out two more models in the background. Once you can distinguish these two (one on the right being blue and upside down – like the topmost photo on this post), notice the vamp on the black one: that’s the men’s Moc!