Coming Spring 2014 — Subscribe to stay up-to-date on the release (And catch more upcoming minimalist shoes for 2014)! Vibram is evolving their flagship running shoe. The Vibram FiveFingers “Bikila,” named after Abebe Bikila and introduced by Vibram in April 2010 (a long-term review of the Bikila here), is getting a reboot as the Bikila EVO come Spring 2014. What’s most interesting about the new Bikila VFFs is that they have a relatively “thick” (compared to other Vibrams) sole with a “max sole thickness” of 8.5mm. Mind, the rubber component of that sole is only 2.5mm and relegated to key wear spots. But I’m jumping ahead, let’s take a look at the info we have on the upcoming Bikila EVO after the jump! 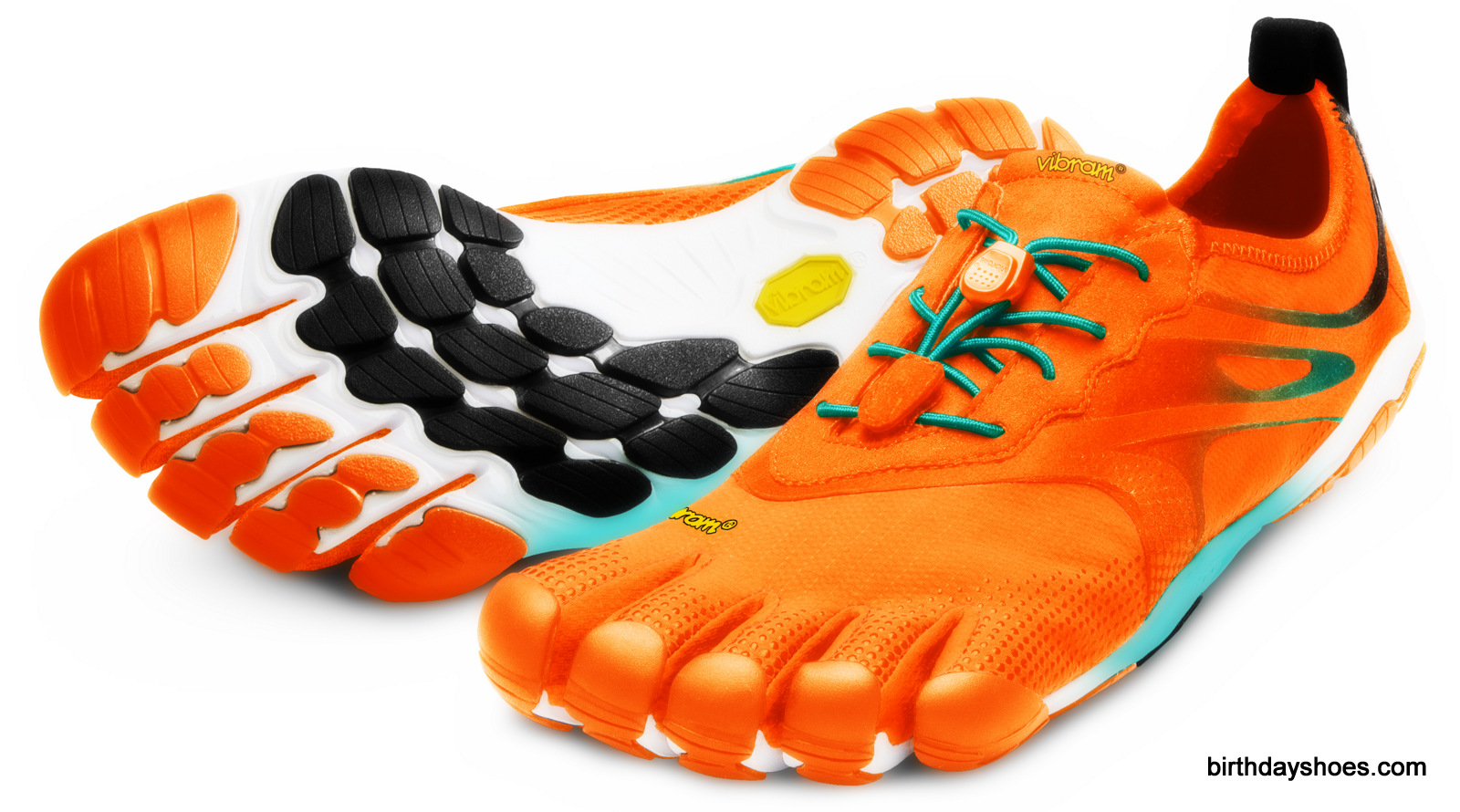 From Vibram’s Spring 2014 catalog: Medium distance running in a minimalist shoe can be challenging for new minimalist users. It takes time for your foot to adjust to an increasingly thinner level of sole. The Bikila EVO is a fully redesigned shoe built for those looking for a shoe that gives the benefits of going barefoot and that has slightly more cushion to offer more support on a medium distance road run. It is still thin, and gives you just a bit more so you can be confident making the switch. WEIGHT: M43 = 5.07oz W38 = 4.23oz MAX SOLE THICKNESS: 8.5mm (2.5mm-rubber/4mm-EVA/2mm-insole) Machine Wash Cold/Air Dry Not noted above is that the Bikila EVO is zero drop. What stands out about the Bikila EVO is clearly the new sole, which clocks in at 8.5mm thick and is comprised of three parts—an EVA (foam) platform (the thickest part of the sole), nine (by my count) rubber sole pieces (one per toe, three at the forefoot, and one at the heel), and an insole, which is also made of EVA. Many have already remarked that this seems thick for Vibrams—and once again a few folks are suggesting Vibram is abandoning it’s minimalist roots for thicker shoes. I’d contest that argument for many reasons—not the least of which include the fact that Vibram’s El-X and upcoming KSO EVO (more on this one soon) are incredibly “barefoot” — certainly in line with Vibram’s discontinued Classic, Sprint, and KSO. It’s important to point out that the Bikila EVO’s stack height is only a millimeter more than the Trek sole, which has been out since 2010. The EVA of the Bikila EVO will likely be the defining aspect of these toe shoes as out of the total 8.5mm thickness, 6 of those millimeters are EVA. EVA compresses a under load, is lightweight, and breaks down faster than rubber. This is what will give the Bikila EVO the “cushion.” It’s also what helps keep the Bikila EVO lightweight. And finally, it’s why Vibram has embedded rubber at key points on the Bikila EVO — to help manage the wear-and-tear on the soles.

Above you can see the Bikila EVO sole. The white that traverses the length of the soles is EVA foam. The highlighted orange and black bits are the Vibram rubber. You’ll note that at the forefoot, Vibram has broken the rubber “plates” up into three pieces, likely to help maintain flexibility in the sole at the forefoot. At the heel, though the rubber is one connected piece, it’s similarly diced up into lateral “cuts” which should improve the flexibility of the sole horizontally. Interesting. And the toe rubber bits are separated, which makes sense.

Looking at the future of Vibram FiveFinger’s line come Spring 2014, you could argue that the Bikila EVO is geared towards those who are nervous about going to even more barefoot shoes—such as the SeeYa LS FiveFingers or the EL-X (or KSO EVO, another Spring 2014 addition we’ll showcase soon!). To me, Vibram is just doing their best to have an offering for everyone in their suite of products. Really, there was some overlap between the old Bikila and the SeeYa/SeeYa LS. Sure the SeeYa was more minimal than the original Bikila, but they were still close, and fans were forced to choose between the two. Not an easy thing to figure out. Meanwhile, what about folks who have dialed in their natural running gait, want a little more cushion underfoot, but also like the feeling of running in foot gloves? The Bikila EVO could work for these Vibram fans, too. Personally, having tried a lot of minimalist shoes that leverage a bit of EVA for cushion and weight-reduction, I’ve rarely felt the result was too soft or too cushy. To date, the old, original “Minimus Life” from New Balance (Feb. 2011) is still a heavily-worn shoe in my closet and it’s thickly soled compared to the Bikila EVO — that Minimus Life rang in at 15mm thick at the heel with a 4mm heel-to-forefoot drop. However, the EVA makes them lightweight and very comfortable on hard surfaces like concrete. I’d just say to the hardliners and naysayers this: don’t be so quick to judge! Remember that there is no golden rule barefoot shoes sole thickness rule (some general parameters on “barefoot shoes” can be found here). With that said, I’ll hold further comment at this time, but leave you with a slew of stock photos that show off the colorways expected to arrive with the launch of the Bikila EVO. If you want to stay up on other new toe shoes coming Spring 2014, be sure to subscribe as I’ll be showing off more in the coming days and weeks!