Over the last two racing seasons, I’ve used Vibram Five Fingers Sprints and Bikilas in training and racing a number of events ranging from 5K running races and sprint triathlons to half marathons, marathons, and an Ironman. In total, I’ve put about 500 miles on the Sprints and 750 miles on the Bikilas. Most of my running is done on paved surfaces, but I’ve even done a little hiking and wear them casually quite often.

Today I’d like to review the FiveFingers Sprint and Bikila from a long-term use perspective. Let’s take a look at some pictures after the jump! 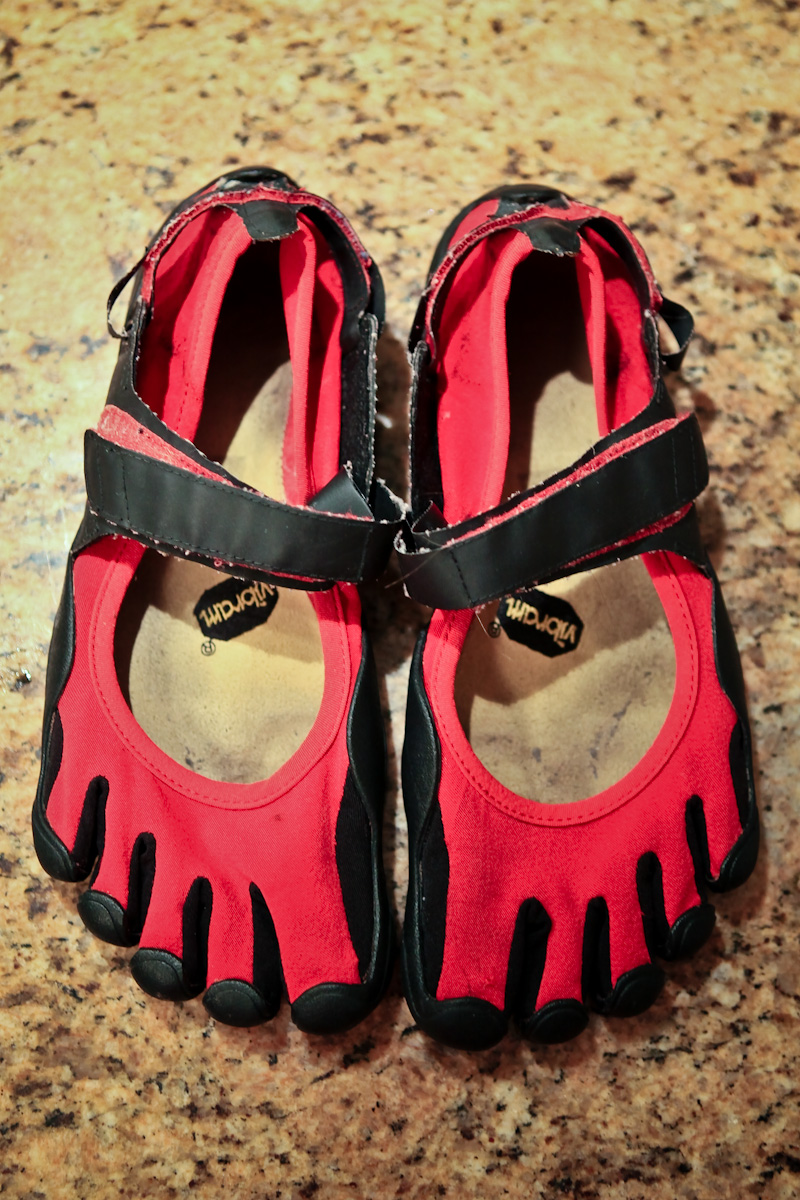 From a top down perspective they look like they are in pretty good shape still. You can see some white “fuzzies” that the Velcro picked up in the wash. I use the soak-in-vinegar/water-trick followed up by a run through the washing machine to clean them. This pair has probably been washed 10-15 times. The colors haven’t seemed to fade much despite being used out in the elements for hours and hours. 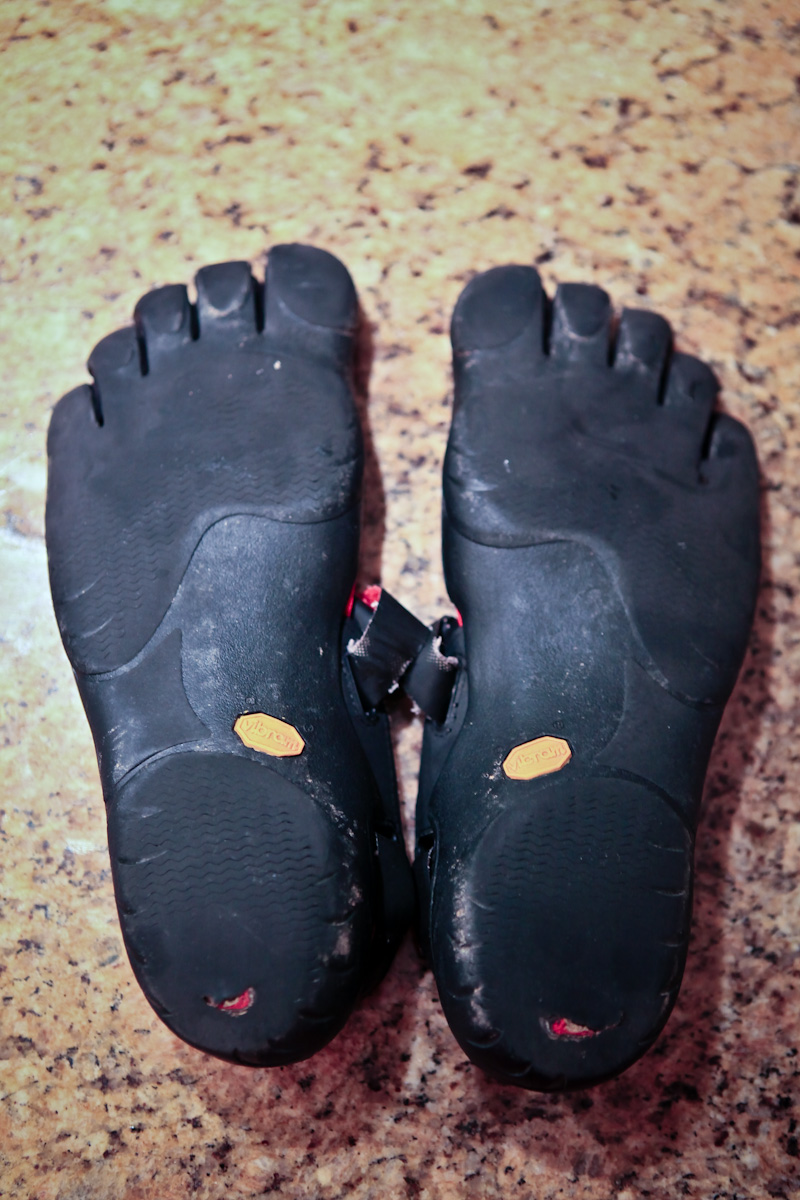 Flip them over and you can tell that they are well worn. I don’t have perfect running form and you can certainly see where my heel makes contact with the ground and has worn all the way through the rubber. 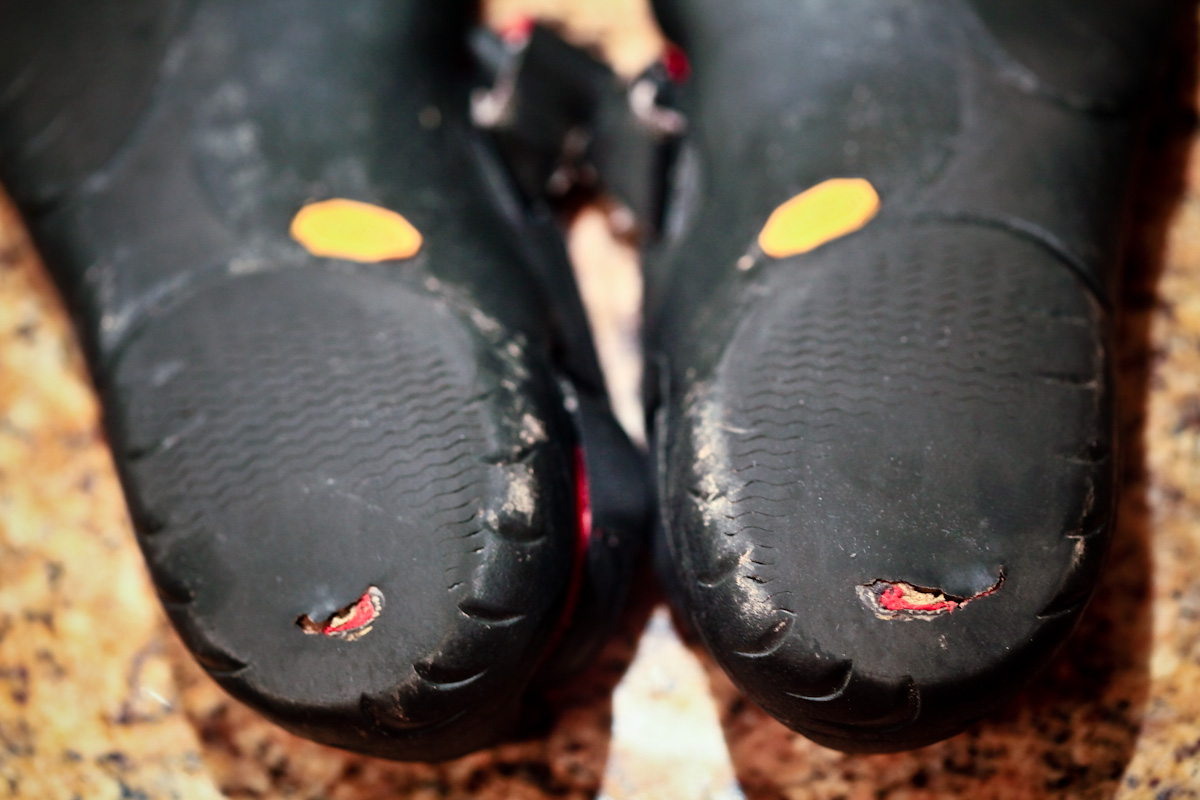 Close-up of the heels

Oddly enough the left foot has a larger hole than the right foot. You can also see where some of the razor siping has also been worn away on the heels. 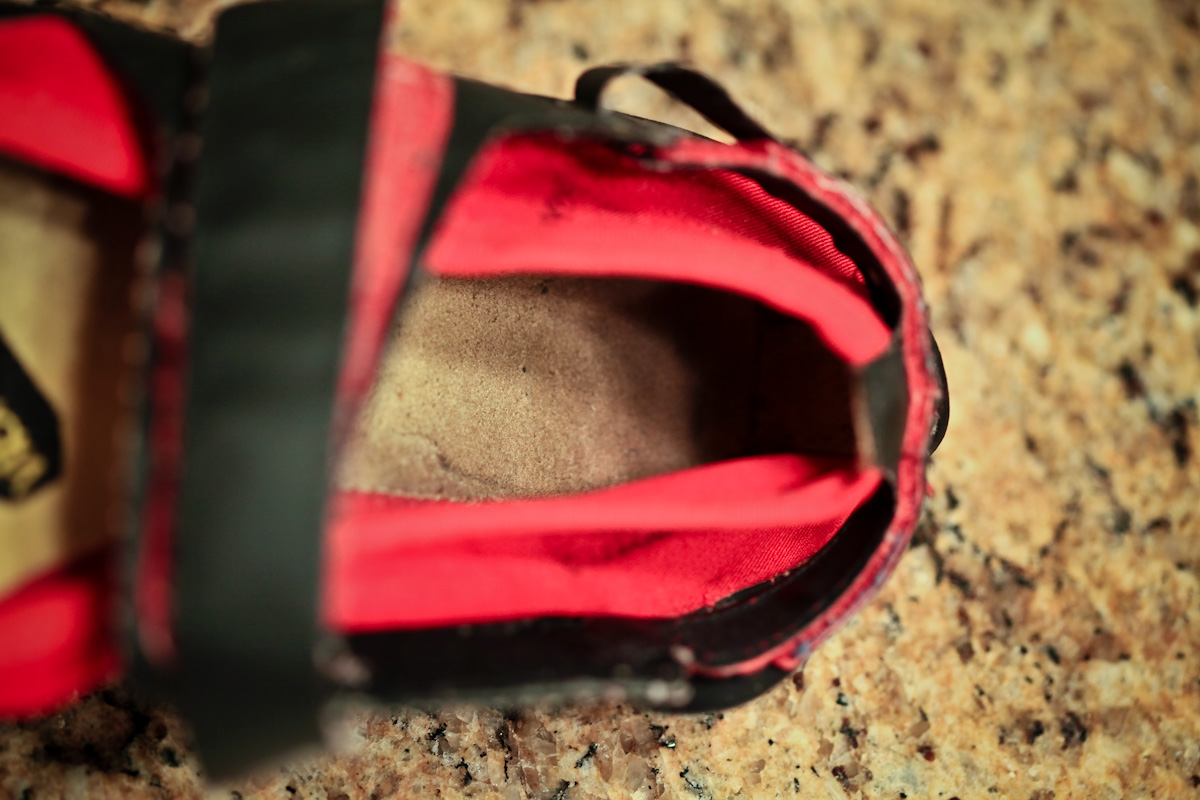 Close-up of the inside

The hole doesn’t go all the way through the yellow inserts on the inside. They are still fairly comfortable to run in, but have been retired from running use and now used mostly for weight lifting. 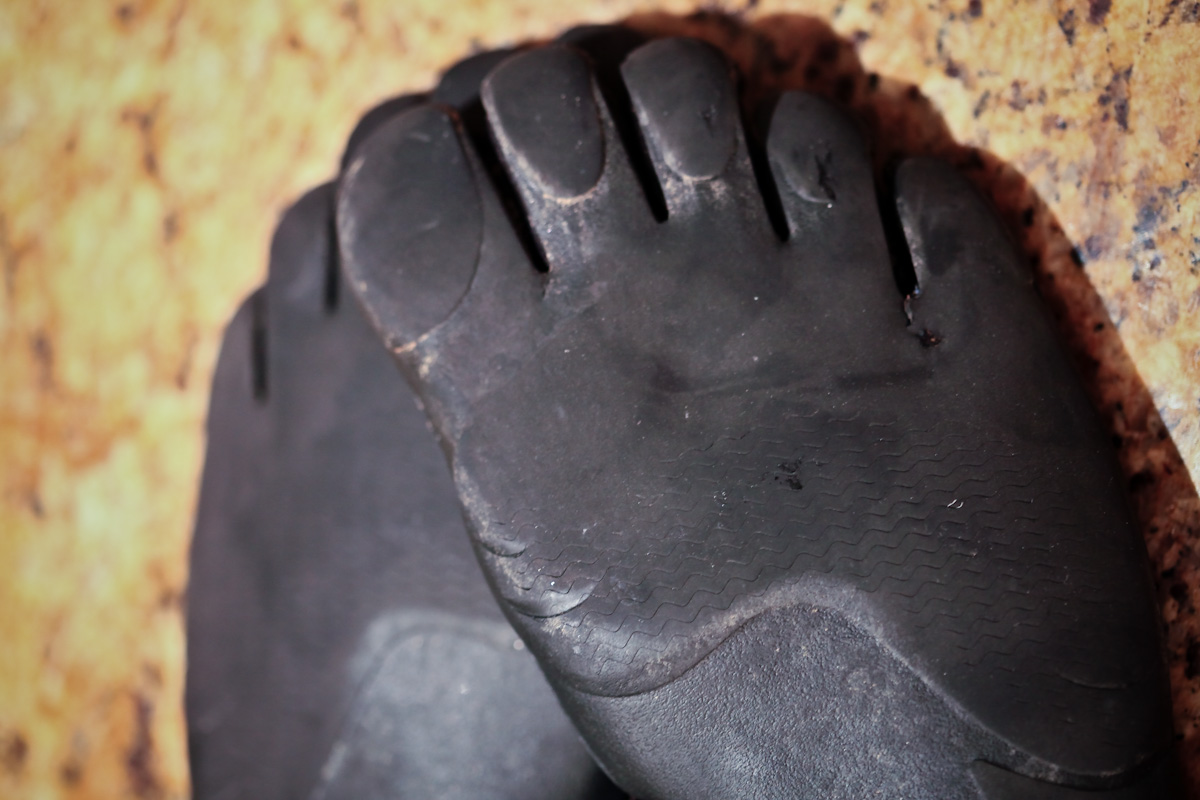 Razor siping on the balls of the feet

Moving up the foot you can see where the razor siping has also been worn away on the balls of the feet. The big toe has lost a lot of material and the sizing numbers “M43” is almost completely gone on the left foot. 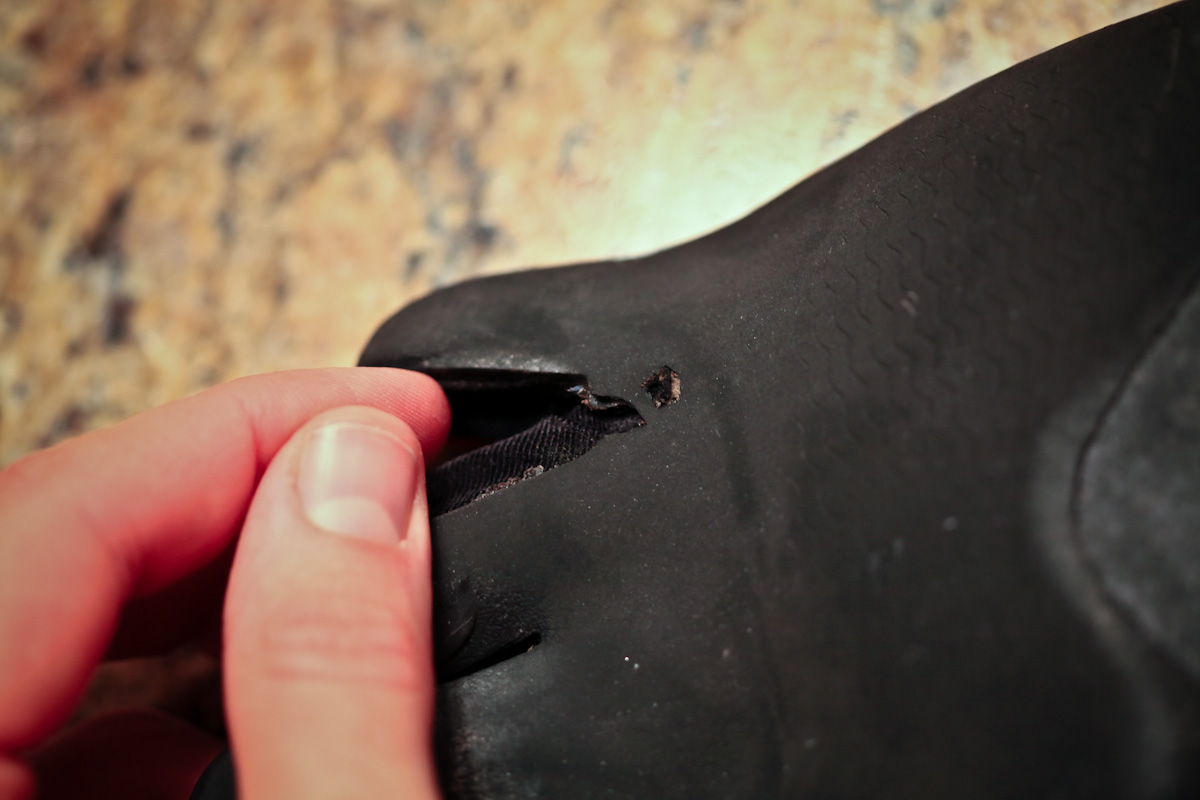 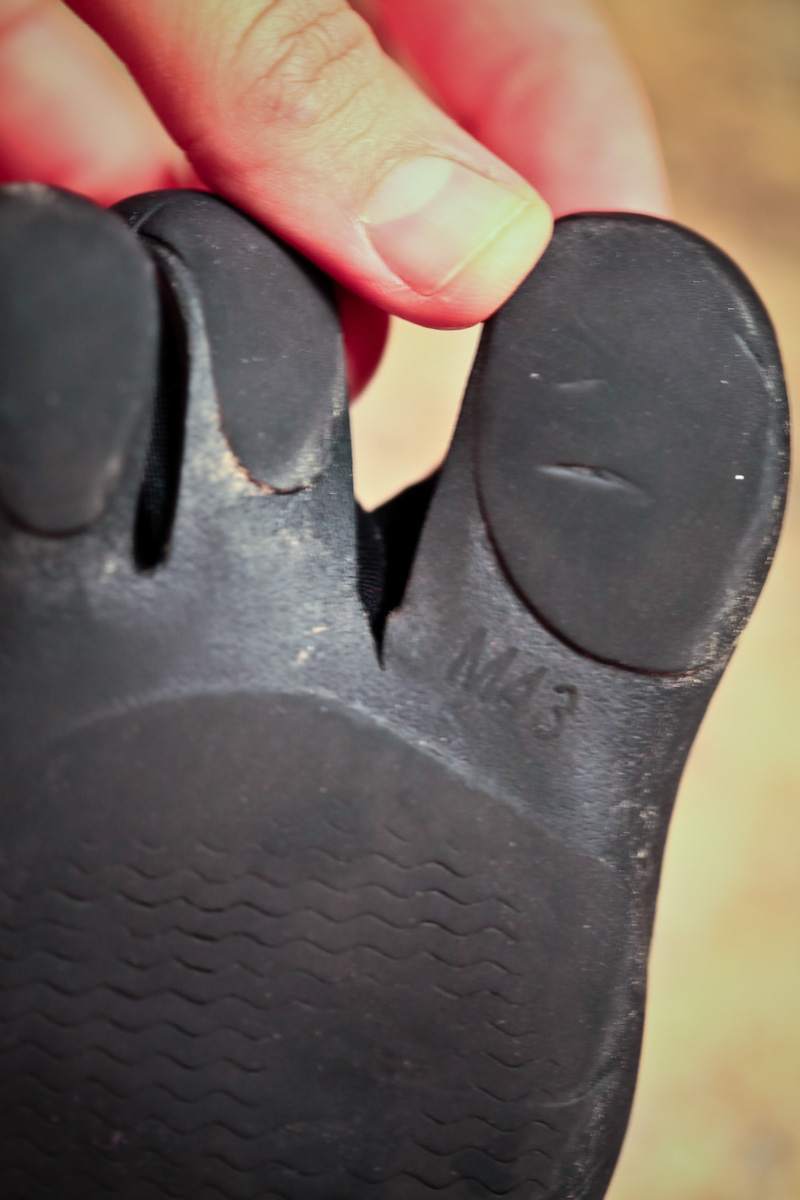 The sole has started to rip in a few places in between the toes, but this hasn’t seemed to affect anything. You can also see that the right foot still has the sizing number and more tread left than the left foot. 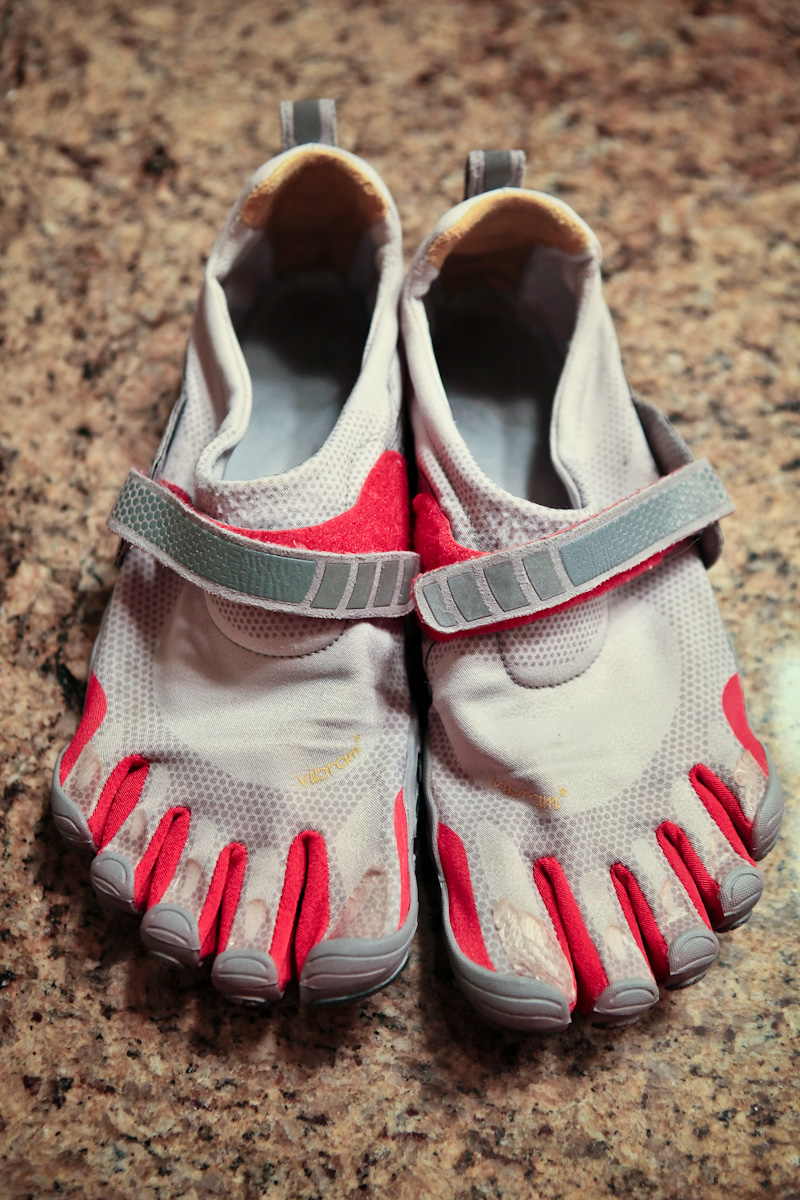 Still looking good from the top! While not still sparkling white, the fabric colors and reflective bits have held up remarkably well. The material on the uppers has stretched a bit and is much easier to put on then my newer pair of Bikilas that only have about 50 miles on them. 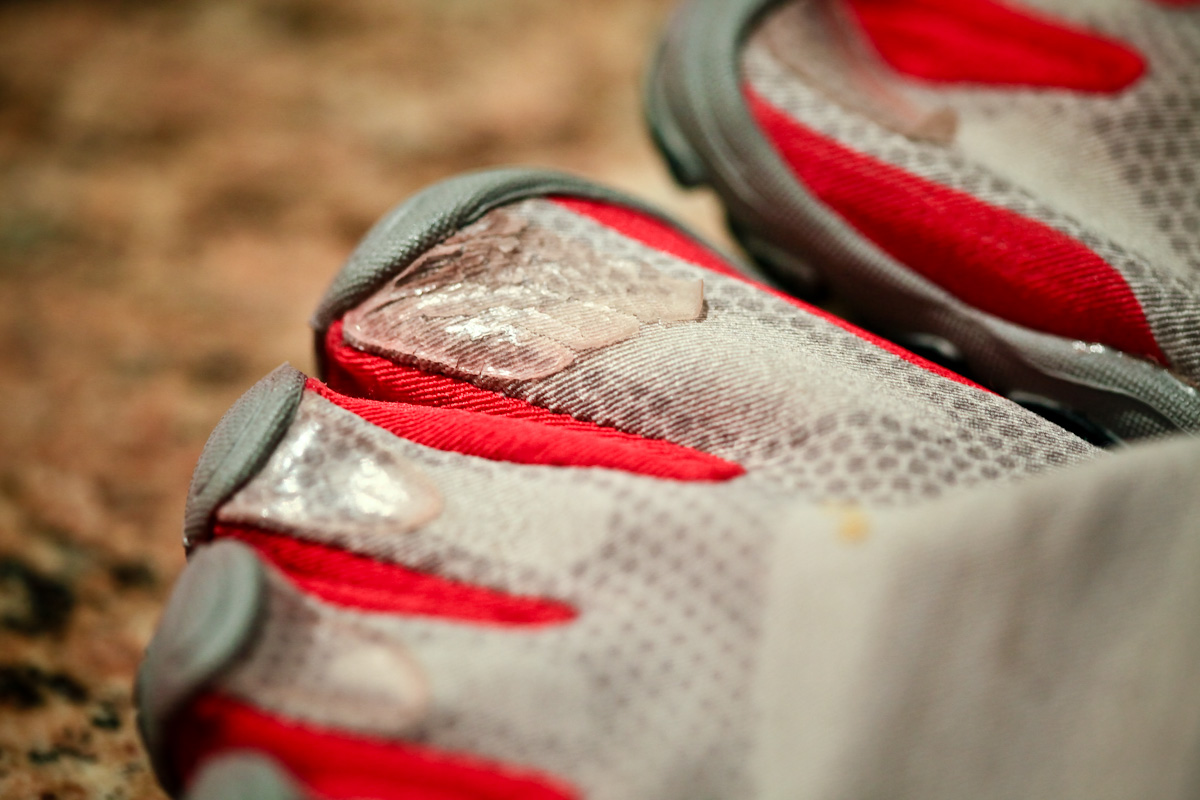 The upper TPU toe protection over the toenail areas is thoroughly cracked and even has a bit of red tinge to them now which is probably from the dye running from use in the rain and going through multiple washes. 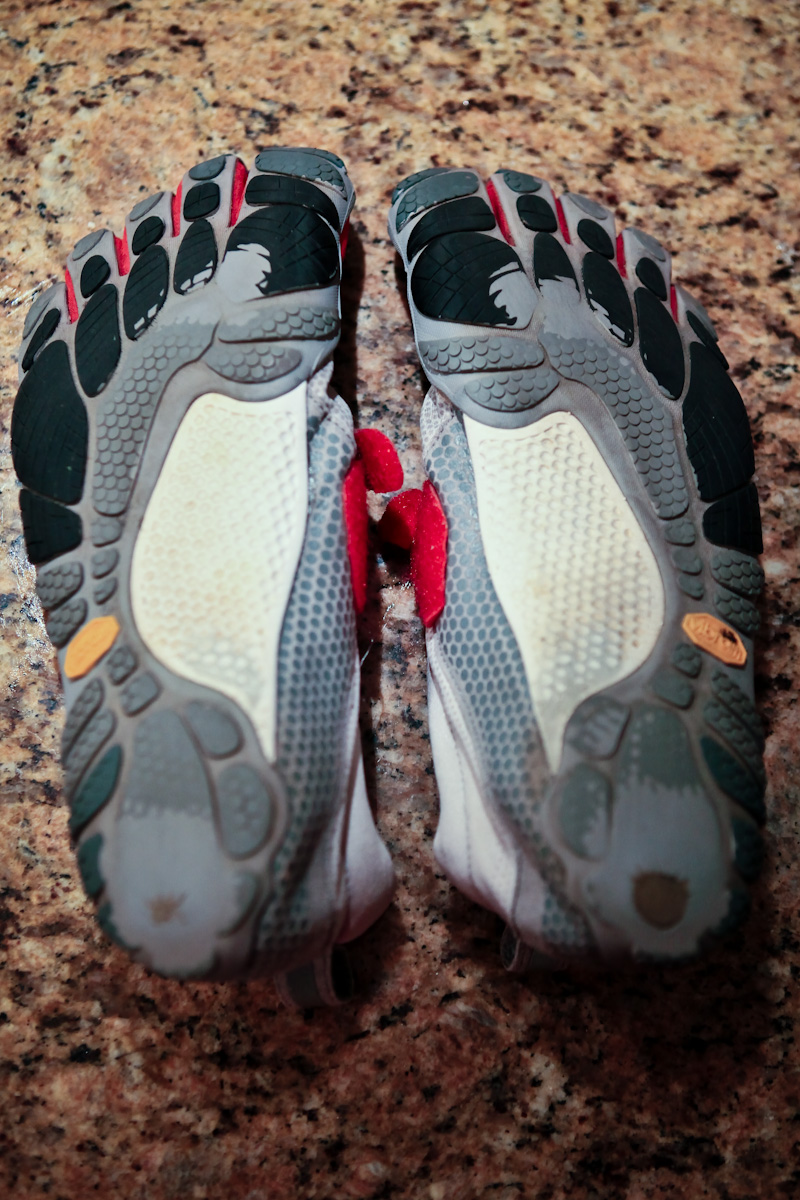 Flip them over and you can certainly see the wear compared to a brand new pair. The wearing on the heels and balls of the foot is consistent with the wearing on my Sprints. 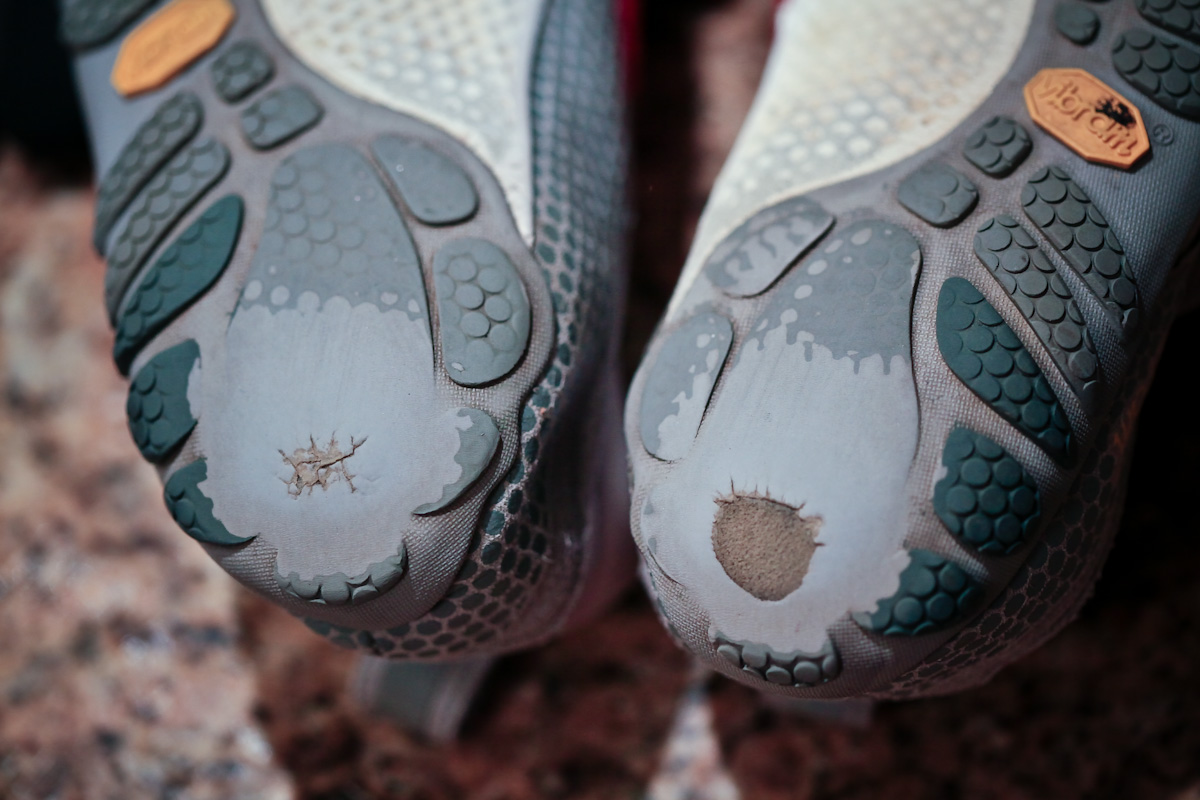 Close-up of the heel

The hole goes through the rubber sole, but doesn’t reach through to the inside of the shoe. Again, the right foot has the larger hole than the left. 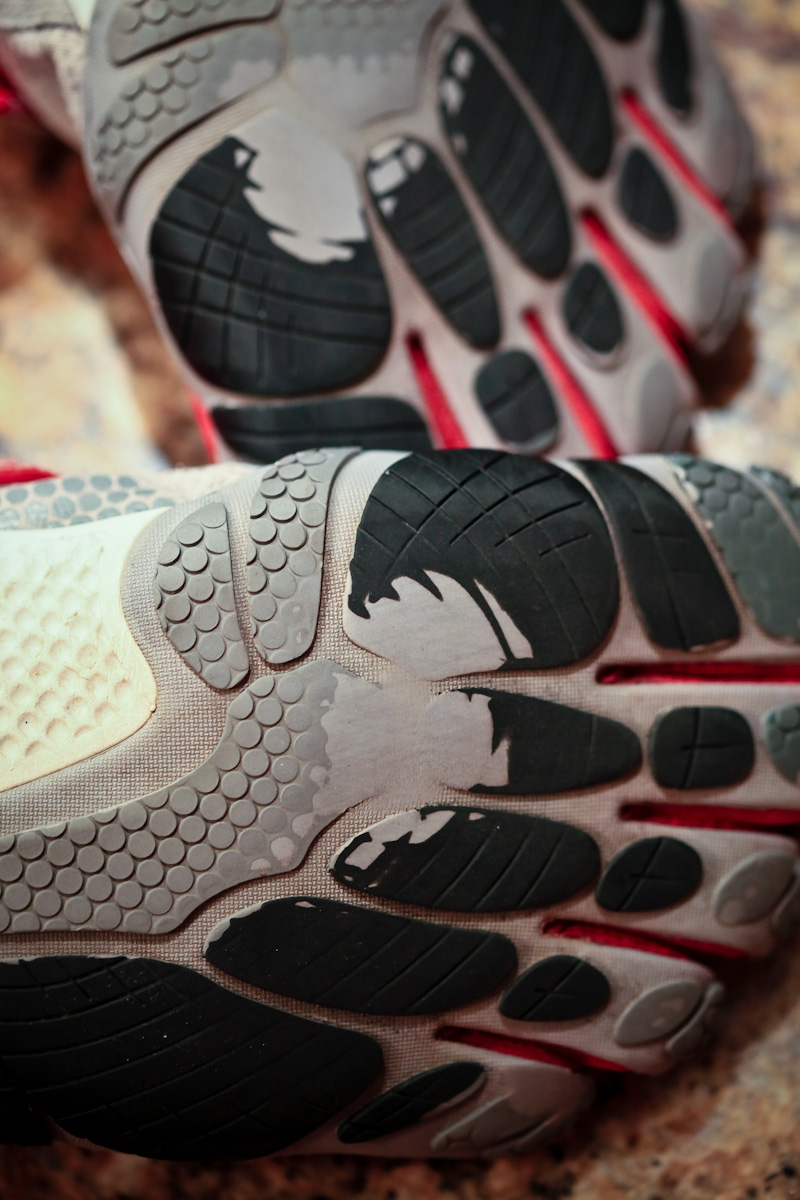 Balls of the foot

The balls of the foot have some of the material worn away, but not nearly to the same extent as on the Sprints. The soles of Bikilas are thicker than the Sprints and this is most apparent here in the mid-foot section.

Both the Sprints and Bikilas have both held up well to a high volume running schedule. Whereas some of my training partners change out their shoes every 300-500 miles or so, the great thing about “barefoot style” running is that it doesn’t matter how worn FiveFingers are, they get more comfortable the more you use them. I’ve recently gotten a second pair of Bikilas and am slowly breaking them in by rotating them into my runs and casual wear. With the new pair, I can really tell how much the opening around the uppers on the older pair has stretched. The old pair slips right on, while the newer pair requires much more effort getting my foot into.

While I’ve found that the Sprints are at the end of their life for running, they are still very useful to use in the gym for heavy squatting or deadlifting routines where it really helps to have as little material between your feet and the ground. I will continue use the Bikilas for running and hope to get well over the 1,000 mile mark on them.