Last week we did an initial review of the new Speed XC FiveFingers, water-resistant toe shoes Vibram just released a few weeks back. Today, we’re going to be doing the same thing for the Lontra FiveFingers, which hit about three weeks ago. The Lontra could be described as a ‘roid-raging KSO — outfitted with the most aggressive 4mm rubber, “lightly cleated” “Trek” outsole + 4mm EVA midsole and a wholly new water-resistant, tri-layered upper that’s topped off with a very aggressive ankle cuff to seriously keep stuff out. That’s how I’d put it, anyway. Vibram describes the Lontra thusly:

Intrigued? Want to see and know more? Well, read on! For today’s initial review fellow BirthdayShoes blogger Tim Kelley and I will be providing some initial thoughts on these (and double the photo fun!). I also did a video water test, so there’s that, too. In the coming week’s there’ll be a follow-up full review, so you’ll want to stay tuned for that. Let’s go! 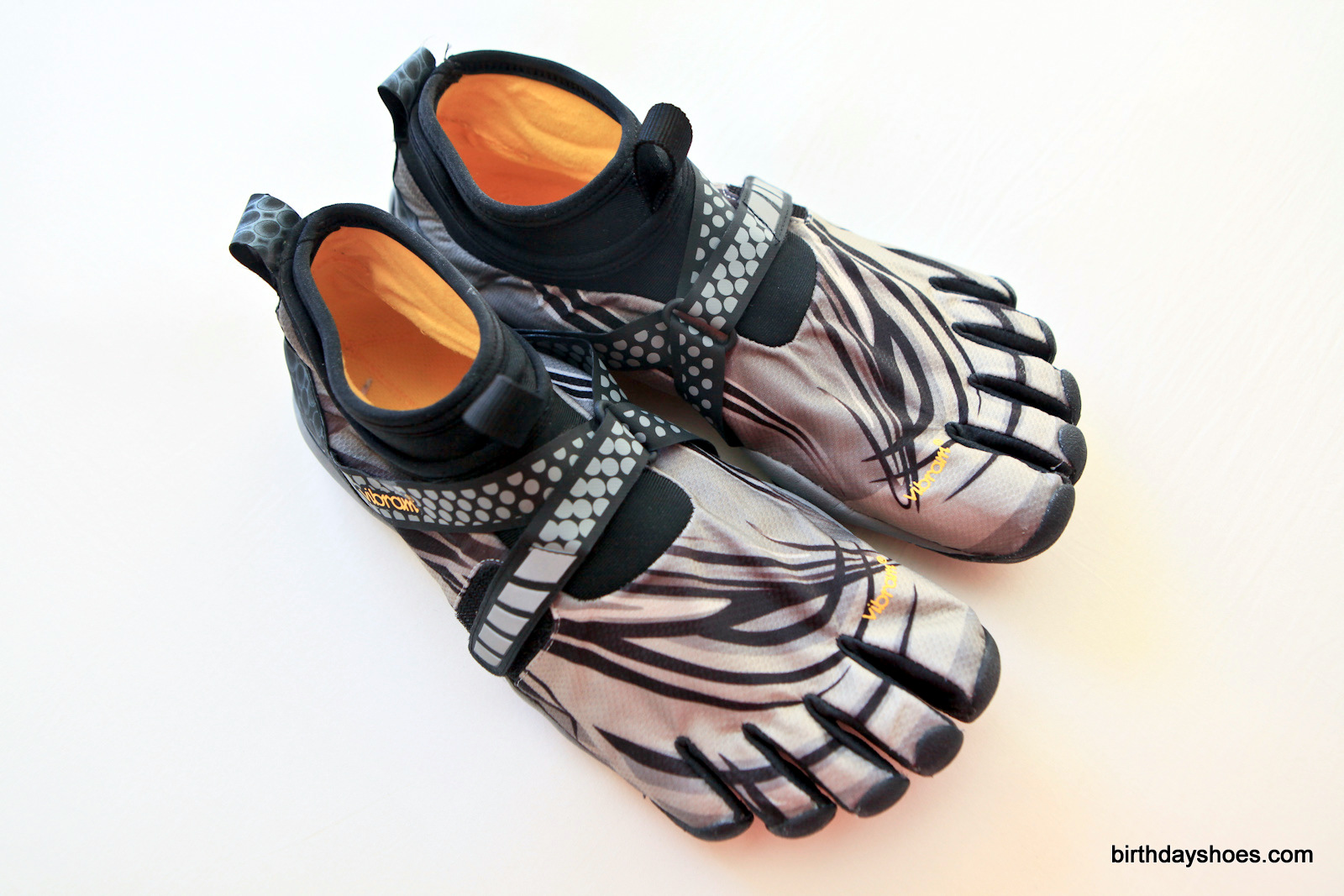 Lontra FiveFingers from Vibram ? Fall 2012
I?ve had a pair of VFF Flows for several years now and while they are great for cooler temperatures, they aren?t great for cooler temperatures and wet weather because even in shallow puddles it seems that water soaks through, especially in the toes. I enjoy trail running in the fall and winter in the woods because temperatures always seem a bit warmer because the trees cut the wind, but there are always some creek crossings or small puddles to worry about. So, back in the spring when I heard that water-resistant Vibram FiveFingers were going to be released I was very excited! My Lontras arrived last week and I haven?t had a chance to get outdoors in the wet and muck to see how they fare, but I have some general impressions I?d like to share based on a day or two of casual wear with socks. The lining of the Lontras is comfortable and smooth and you can?t feel any of the seams. While the piece tongue construction and laces of the Speed XCs (seen over on Justin’s initial review) make them super easy to get on, the Lontra?s neoprene ankle cuff is very snug and as a result, is the most involved of any FiveFingers I?ve tried putting on. After struggling for several attempts, I found the best way to get them on is to mash down the back with my heel while pushing my foot forward and getting my toes into position. From there I can work the heel cuff up, around, and over. The ?X-crossing? Velcro strapping system of the Lontra reminds me a bit of the Skora Base and seems to do the trick well. 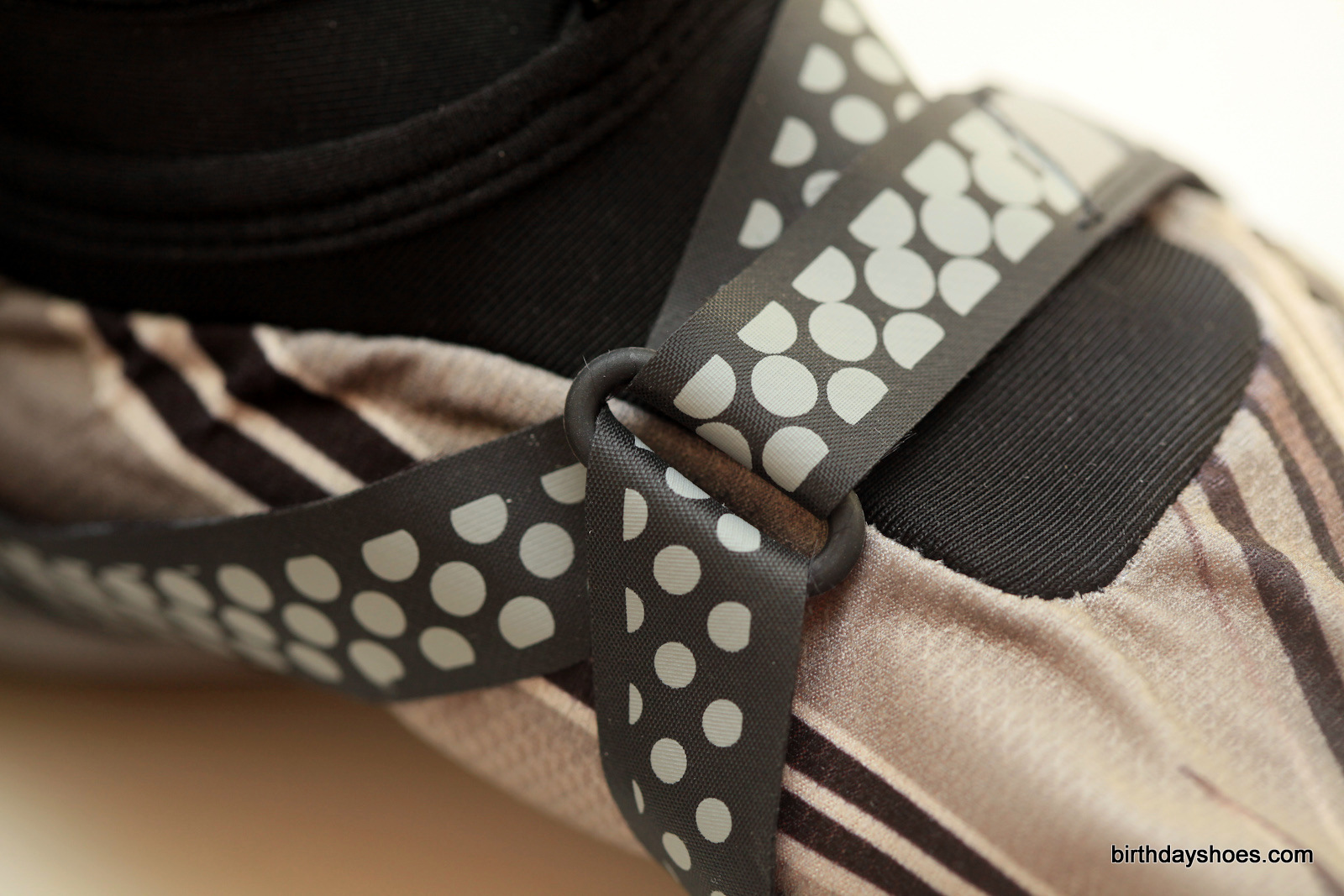 The Lontra FiveFingers utilize an “x-crossing” strapping mechanism to lock the shoes down to the tops of your feet.
One complaint I?ve heard from others on VFFs and toe shoes in general is that they don?t like the feel of something between their toes. I?ve never had this issue with any previous models, but it feels like there is quite a bit more going on with the toes in Speed XCs. This is likely due to water resistant features implemented into the design. For what it?s worth, I also can feel more material between the toes on the Trek LS, but for whatever reason, I don?t seem to notice it on the Lontras. The Lontra is quite warm?they are more comfortable wearing outdoors on a Fall day than indoors at room temperature. They don?t seem to breath particularly well, which is an obvious trade off for water-resistance, but time will tell if this is an issue when running. I?ll be back in a few weeks with a more in-depth review on how things perform! For now, here are some more photos of the Lontras:

About the Author — Tim is a bicycle advocate by profession and an Ironman triathlete for fun which keeps him healthy and fit. He got into minimalist footwear during the summer of 2009 after dealing with injuries resulting from running in “normal” running shoes. Check out what’s going on in Tim’s life through photos at www.TimKelley.net or follow him on twitter: @TimKelleyDotNet 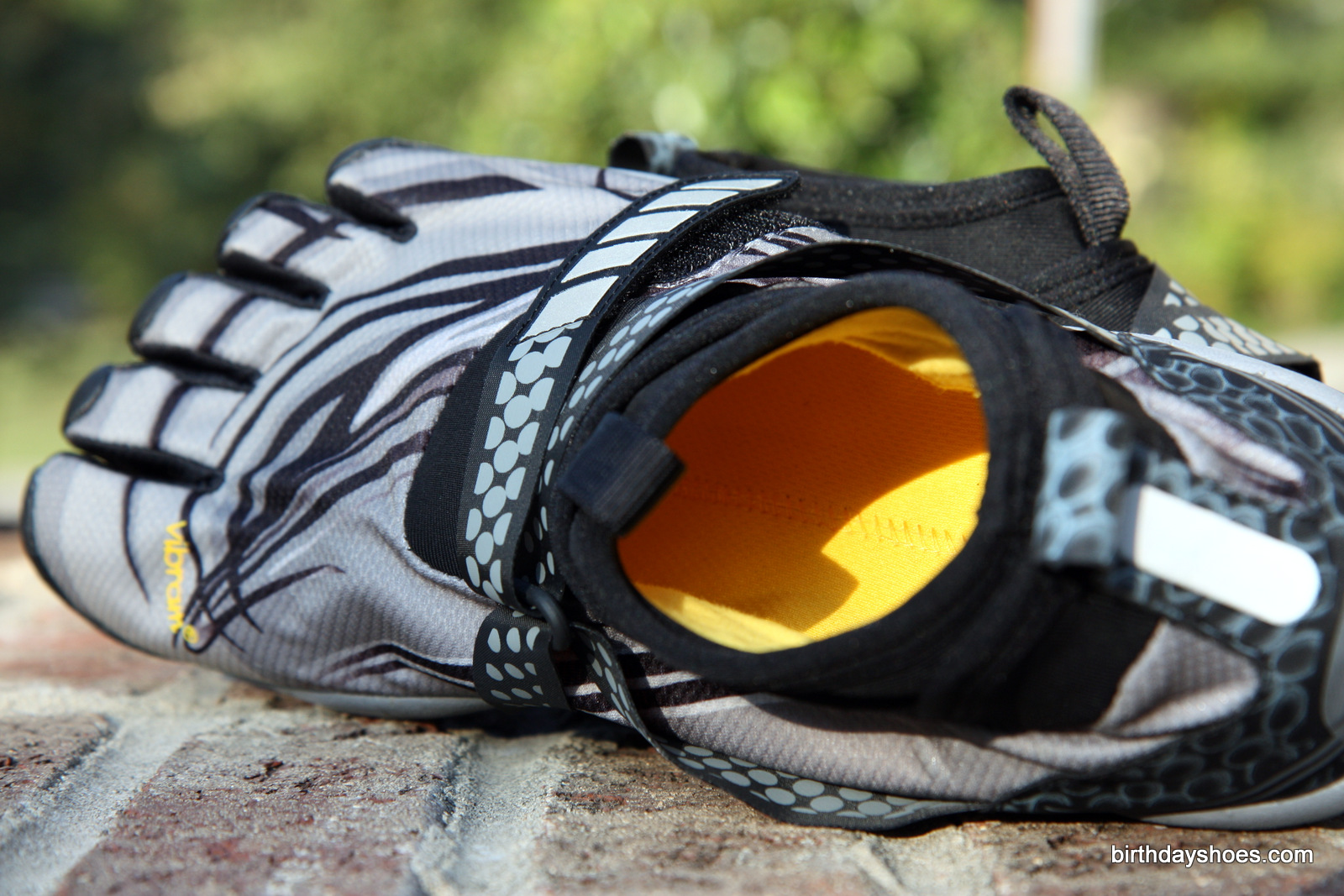 A sideways look at (and into) the Lontra FiveFingers. Note that stitch that runs in the middle of the footbed (a deparature from prior builds of Vibram FiveFingers)
Like Tim, I’ve only had a cursory experience with the Lontras so far. At $150 MSRP, the Lontras are the most expensive Vibrams out right now (the Bormio leather boots were $160 but are now discontinued), so if you’re thinking about picking up a pair immediately, at least you can get some info from this initial review. Here are my photos of the Lontra: I stand by my comparison of the Lontra to a roid-raging pair of KSOs. They are a beefy pair of FiveFingers due to their fairly complicated build: On that cuff, just take a look at this picture and see how I am straining to stretch it with my expanding fingers: 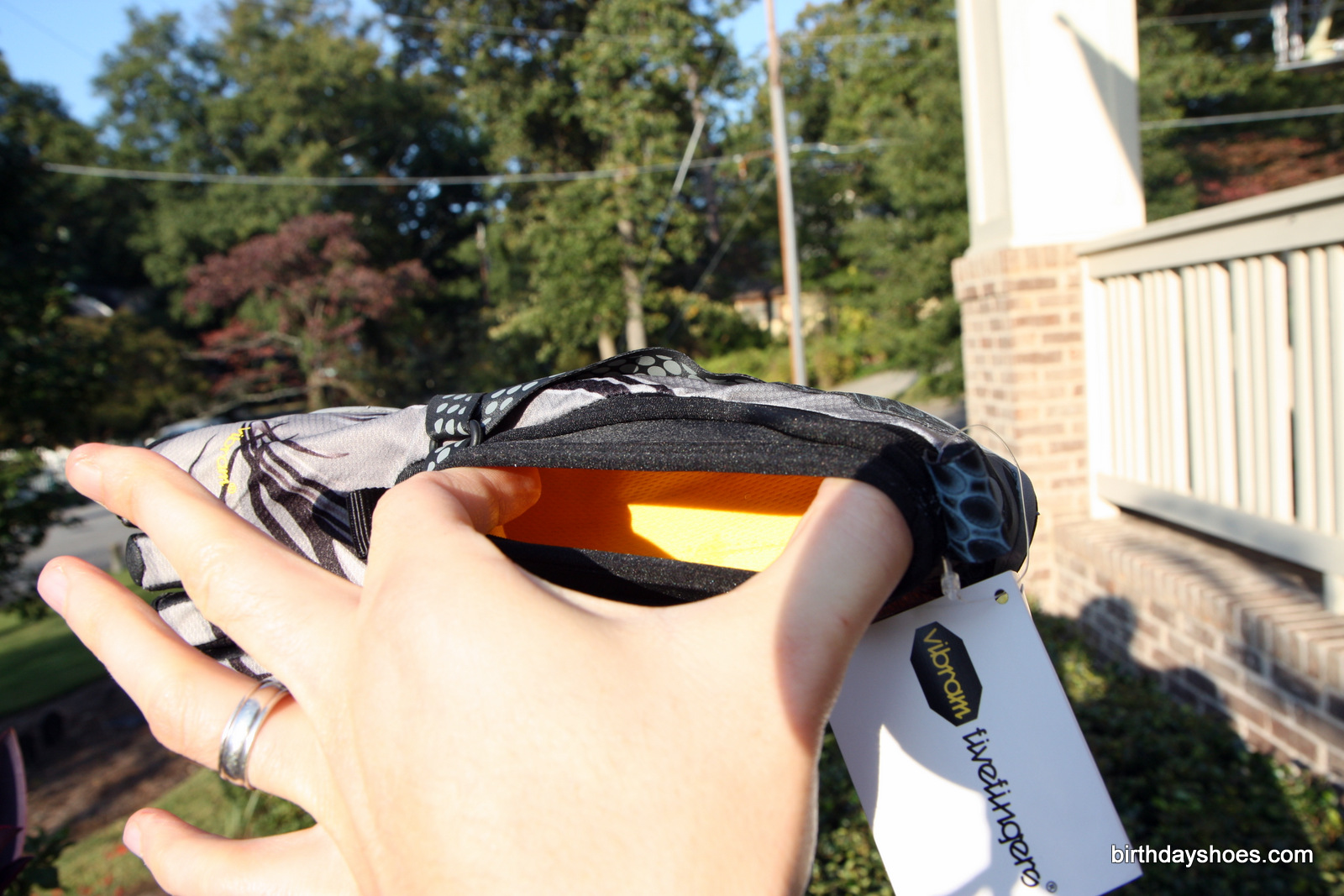 That neoprene cuff isn’t messing around.
The water-resistance seems pretty legit. Given this is probably the main reason you’d be getting a pair of Lontras (that and the insulation factor), from some initial immersion testing, the water-resistance of the build seems to work well. You can see how this works in the video review below. Like Tim, I noticed the Lontras don’t breath the best. This doesn’t surprise me. I don’t find my feet sweating up a storm in them for casual wear but there is more moisture than other more breathable barefoot shoes or FiveFingers. I really like the styling of the Lontra upper. It’s reminiscent of the old KSO Remix in that it employs an almost organic camouflage that isn’t painted onto the fabric but rather looks to be embedded within the outermost upper fabric, itself. I hope Vibram puts more FiveFingers styles out with this kind of patterning (and less of the TPU-painted-on-and-prone-to-crack stuff we’ve seen in models like the KomodoSport (LS), Spyridon (LS), and SeeYa LS). Really like the looks of these uppers.

Video review of the Lontra and water immersion test

Here’s my initial video overview and water immersion test of the Lontra FiveFingers. It’s about eight minutes long, so sit back and relax:

Until the weather drops here in Atlanta and I get to head outdoors in some mud (or rain, but likely not snow here in Atlanta), I won’t be able to do justice to testing these Lontras out. Tim will likely have a better go at it than me so I look forward to hearing what he has to say in the coming weeks. For now, suffice to say that I think Vibram did put out an interesting product in the Lontra. It’s a beefy beast that appears built to really keep all kinds of stuff (weather, water, dirt, cold) out. The compromise is that it’s further away from being “barefoot” — at what point does it make sense to just go with a traditional shoe design for maximizing insulation? Or is having separated toes even in thicker soled (though still <10mm thick) shoes too important? You can pull a trigger on a pair via TravelCountry, REI or CitySports. Speaking of REI, if you’re not ready to pull the trigger but want some Trek-soled Vibrams, REI has the original leather KSO Trek for 50% off ($62!!) in men’s sizes 43-47. The KSO Treks are being disco’ed, so get them while they last. Got the Lontras? Put them through the paces? What do you think?