A few weeks ago we took a quick first look at two pairs of running shoes from a new running company called SKORA. The BASE and FORM models reviewed here today are SKORA’s first foray into an increasingly crowded minimalist shoe market. But as we pointed out, SKORA prefers to eschew terms like “minimal”, “natural” or “barefoot” in favor of their marketing tagline “run real.” What is “real running?” According to the Portland, Oregon based company, they believe that “running shoes should be built to encourage running performance that is biomechanically correct as possible, with minimal interference.” When you boil down all of their marketing jargon, it comes down to encouraging midfoot/forefoot running instead of heel striking through the use of less support and less heel cushioning. So how’d they do? Read on to find out!

In this review we’ll be taking a look at SKORA’s only two models: the BASE and FORM. The BASE has a distinctive Velcro secured strap system while the FORM can be easily identified by itself off-center lacing pattern. Opening the boxes I immediately noticed SKORA’s attention to detail. The shoe boxes have a slick magnetic closure that snaps the lid shut with a satisfying click. The second thing I noticed was an overwhelming smell of new shoe. I was just about knocked off my feet by the smell of fresh leather and something that reminded me of fresh aerosol paint. I’ll be interested to see if any other BirthdayShoes readers have similar smell related experiences. 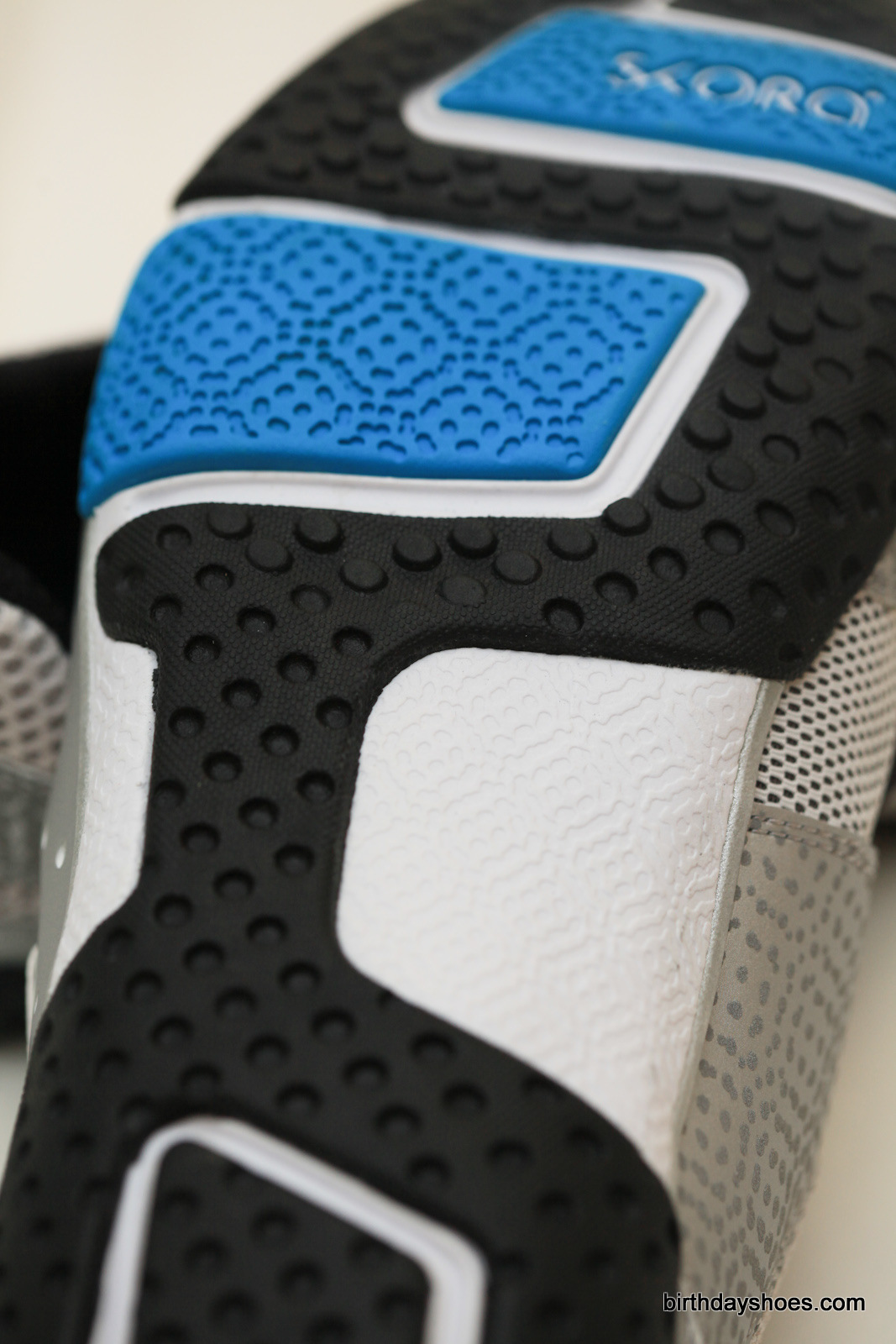 The outsole of both the Skora Form and Skora Base is effectively the same.
The BASE and FORM models share the same zero drop sole with the only difference between the two shoes coming in the uppers. The sole is made up of an outer sole, midsole and an insole. It starts with a 4mm rubber tread that has slightly raised lugs suited for asphalt running. Next comes a 5mm midsole and on top of that is a 4mm removable insole rounding out 13mm of total material between your foot and the ground. The insole has slightly raised bumps which give your foot a little more grip inside the shoe. While these shoes are geared towards road running, you could easily get away with using them on hard packed dirt or sections of grass. For trail running in looser conditions, you’d probably want to consider something a more aggressive tread like the VIVOBAREFOOT Neo Trail. As for the uppers, the material above the toes and metatarsals on the BASE is made of a thin synthetic mesh material that provides plenty of breathability. When you wiggle your toes can you easily see the material flex as you point your toes upward. The criss-cross strapping system with an inelastic band and Velcro fastener is somewhat unique and both models share an elastic Velcro heel strap that theoretically allows you to cinch things down even tighter. The rest of the upper around the ankle is made of a soft and comfortable padded mesh. The BASE uppers are all one piece with no tongue that your foot easily slips into. The look of the large strapping system on the BASE reminds me a of a triathlon cycling shoe which generally has one large Velcro strap across the top. 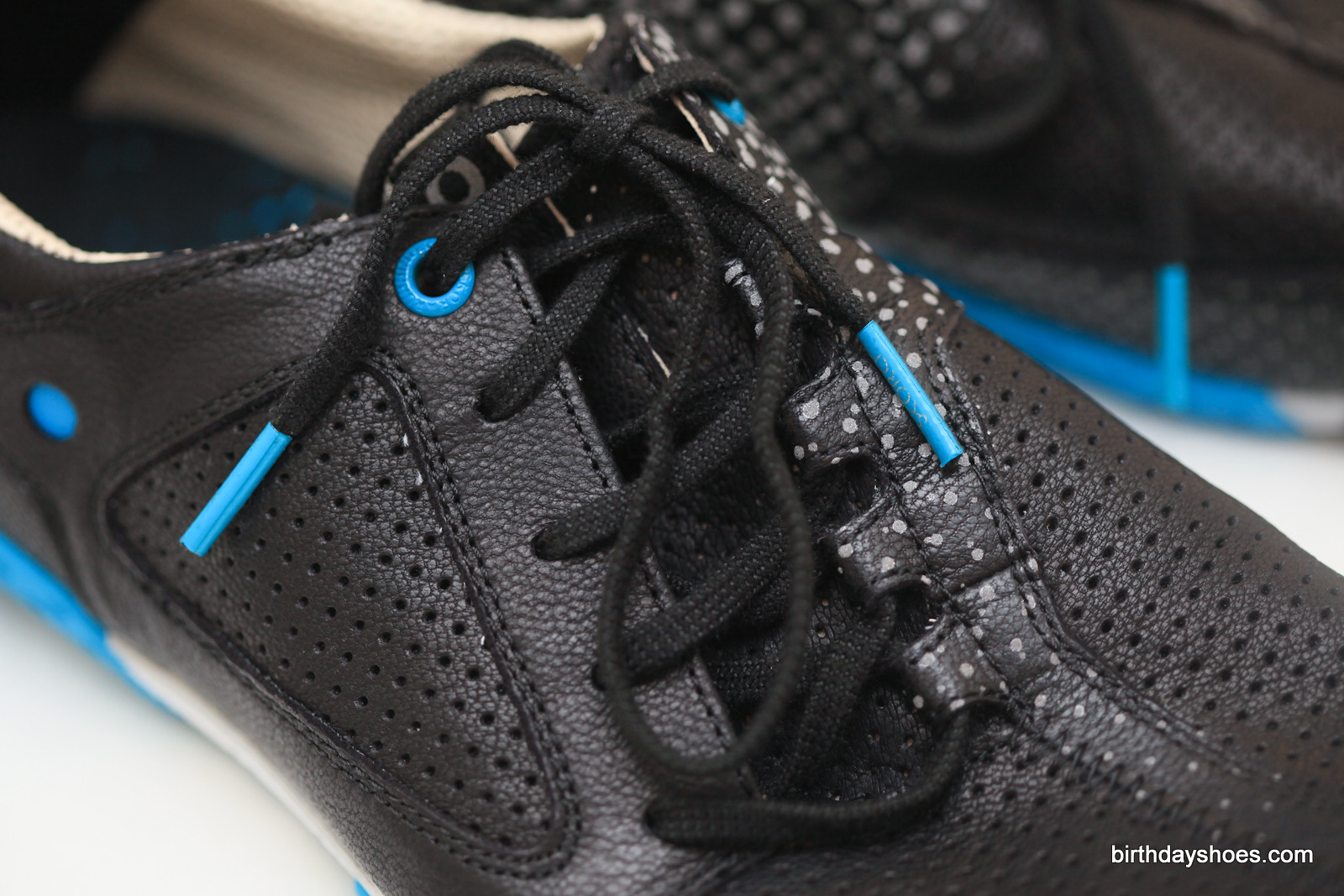 The upper of the Skora Form features asymmetrical lacing, goatskin (outside) and sheepskin (inside).
The FORM, on the other hand goes the opposite direction from the BASE’s synthetic material with a high quality goat skin upper and sheepskin lining. The leather is soft and supple and the lining has a grippy, almost sticky, feeling to it. It should also be noted that the goat skin on the FORM isn’t nearly as breathable as the upper on the BASE. The laces are asymmetrical and run diagonally up the side of the shoe. While the FORM does have a tongue, it is attached as one piece to the upper at the arch of the foot in a fashion that is reminiscent of New Balance’s Minimus Zero Road shoes. The stitching on the uppers is first-rate and the over construction gives a premium feel to the shoe. Both pairs have a wide toebox that I found comfortable. For frame of reference and comparison, I’m comfortable in just about any pair of Vibram FiveFingers, prefer the 2E version of the Minimus Road Zero, and generally find anything by VIVOBAREFOOT to be comfortable, almost to the cusp of being too wide. The FORM also comes with an extra pair of blue laces that match the SKORA blue, which gives you a nice option if you have fashion qualms with the black laces. 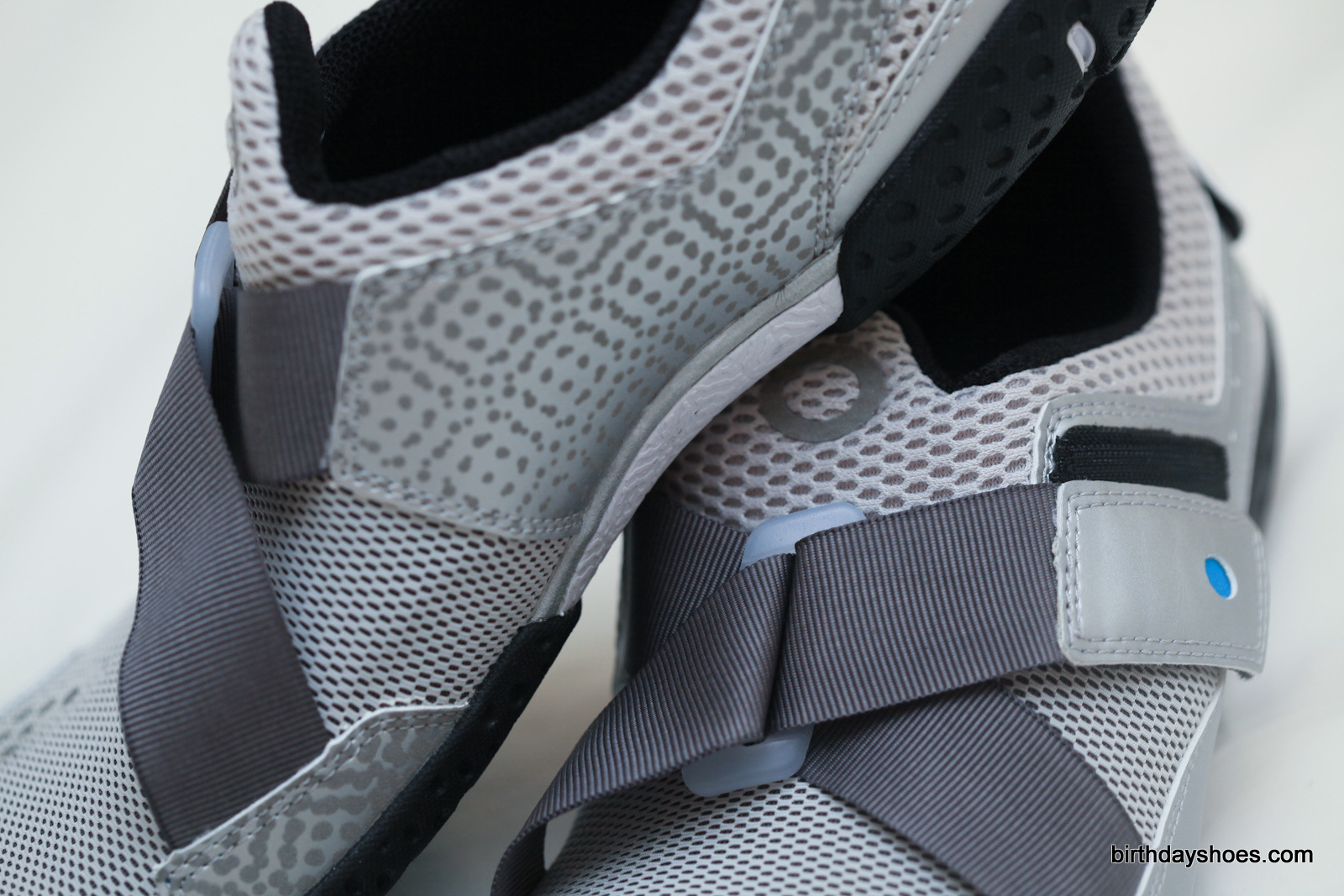 The upper of the Skora Base has a unique, velcro-attached criss-crossing strapdown mechanism for dialing in fit.
I generally run in Vibram FiveFingers (SeeYas and Bikilas being my current favorite VFFs) and I tend to like a snug fit in my running shoes. I was slightly disappointed in the BASE’s strapping system as I felt my foot wasn’t locked down as much as I would like. I also found the elastic heel strap to be fairly useless and ineffective in tightening up things either. I was much happier in the FORM, which has a little more structure to it in the upper where I could cinch down the laces to get a better fit on my foot. The heel cup fit snuggly and the removable sole didn’t slip around under my feet at all.

As one of the main features I look for in a running shoe being a thin sole with excellent feel for the ground, I found both pairs of SKORAs to be disappointing. The ground feel and transmission is muted due to the combined 13mm of rubber tread, midsole and insole between your feet and the ground. The rubber used in the tread is not particularly compliant and lends a stiffness and inflexibility to the overall feel. (For comparison, think of the sole flexibility on the first iteration of the Minimus Trail—it’s decent, but now where near what you’d find on a pair of VFFs). While SKORA’s marketing doesn’t like to use the term “minimalist” even if it did, it would be incredibly misleading. Don’t get me wrong, these shoes are zero drop and have nowhere near the over cushioned “foot cast” feel of typical running shoes, but they certainly can’t compare to VFFs or some of the other ultra-minimalist shoes reviewed on this site. Even when compared to other competing company’s offerings, like the previously mentioned New Balance Minimus Zero Roads which have a similar 12mm stack height, the SKORAs come up short.

The Skora Base on the right has noticeably more toe spring (lift at the end of the shoe) than the Skora Form (left).
I also have a few other minor nit-picks. Both shoes have a fairly aggressive toe spring (curvature of the front of the shoe upwards) with this being more severe in the BASE than the FORM. Another thing I noticed was that the tread has a slight “raised platform” section on the sole at the heel. When wearing them for the first time, standing with my weight relaxed on my heels, I could feel some rocking and instability when shifting my foot in a lateral motion. While neither the toe spring or the side to side instability had much of a noticeable effect when running, it seems like a company focused on “real running” would not have included these features. 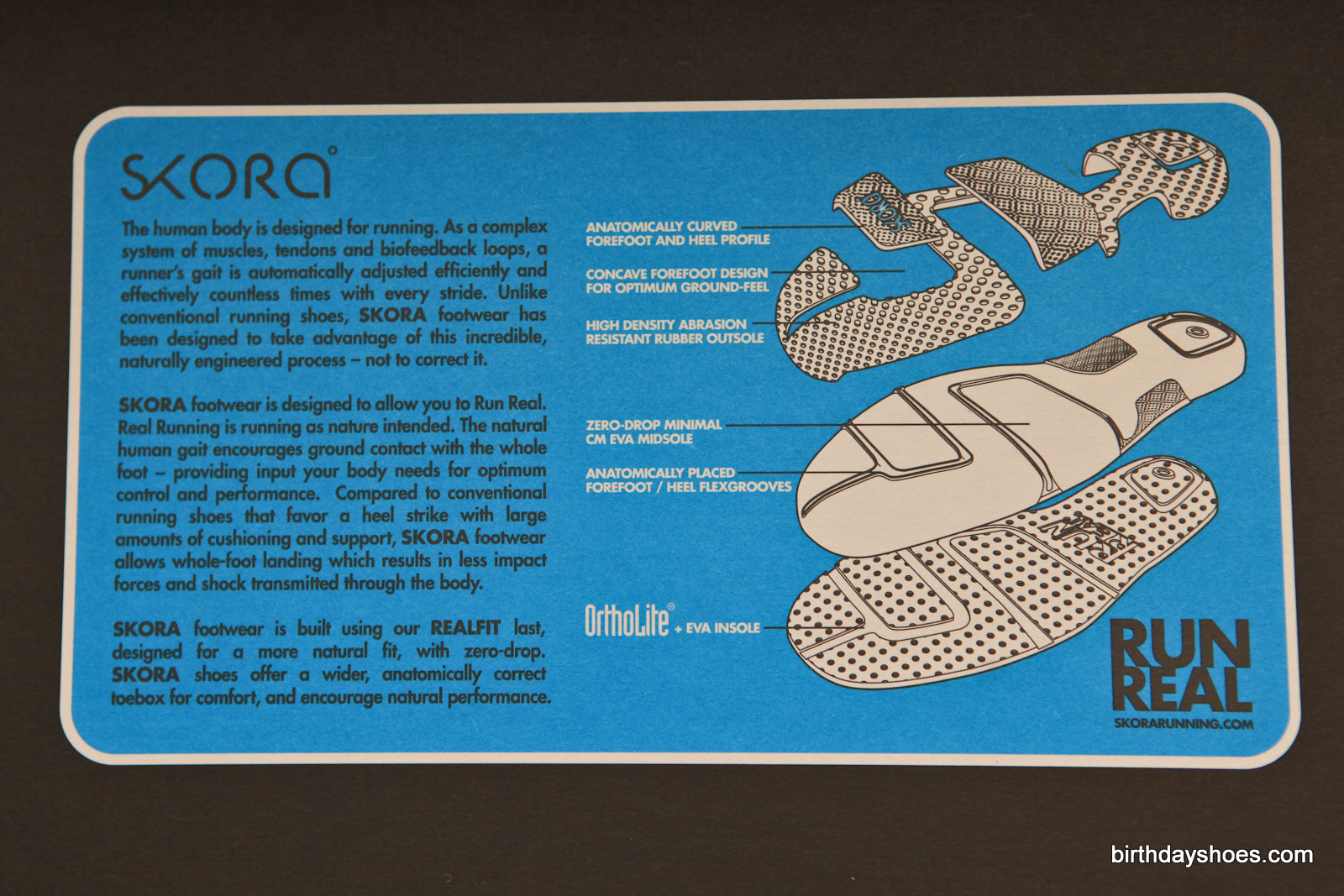 The Skora shoes come with a bit of product info inside the box.
Both models did just fine on the road, track, local paved paths and even a little light off-roading on packed dirt surfaces. They are comfortable to wear and give a plush ride. I preferred the FORM over the BASE since I felt like I could get a tighter fit with the laces. I never experienced any blistering or hotspots while wearing socks or even going sockless. As I’ve mentioned, I prefer a thinner sole on my running shoes so I ended up taking out the removable insole. This gave me 9mm of stack height which felt much closer to the feel I like. Unfortunately, with the insoles taken out, the SKORAs are left with a somewhat unfinished and rough feel to the inside of them, which is a shame for such a pricey shoe (pricing details below). It has been unusually dry this Spring in the DC region, so I haven’t been able to take them out in the rain to see how the tread pattern performs under slick conditions. I’m also interested to learn how the leather holds up under wet conditions. SKORA touts the water resistance and durability of the leather they’ve used on the FORM, claiming that while ordinary leather can take 24 hours to dry and can result in hardening and cracking, their leather can dry in as little as 6 hours and still feel soft and supple.

The BASE comes in silver (photoed here) and blue colorways and will run you $125. The FORM comes in black (photoed here) and “natural” colorways, which is a white and red scheme. But here’s the kicker—if you thought VIVOBAREFOOT or some of Newton’s offerings are expensive, you’ll have sticker shock when you see that the FORM, being the flagship of the two models, will run you a hefty $195. Currently available only in men’s sizing from size 8 to 12 in half size increments, you can’t try these shoes on before you buy as at this time they can only be ordered online at www.SkoraRunning.com. The good news is that all SKORAs are shipped with a pre-paid FedEx return shipping label so swapping out sizes should be easy. On top of that, shipping is free within the continental United States.

So what’s my final take on things? Here’s my pros/cons list: Pros: Cons: Bottom line: if you are a strict Vibram FiveFinger runner looking for a shoe with a bare minimum of sole and great ground feel then you’re going to be disappointed. If you’re feeling spendy and are the type of runner who prefers a bit more cushion SKORA might just have something for you. If you’re looking to make the jump from a traditional running shoe to barefoot or VFF running, then SKORA’s offerings may be a (pricey!) option. As a casual walking shoe I find both the BASE and FORM to be a good street shoe option that pairs well with jeans or shorts. For me SKORA has a place in my closest as the shoe I put on after a long run or hard race.

Below, Skora BASE in grey and FORM in black.

After this post was published there was quite a bit of feedback in the comments. It appears that these shoes are very polarizing—readers either love them or hate them. Furthermore, a point of discussion that kept popping up was the insoles. The question is, do you keep them in and add an additional 4mm of stack height, or do you take them out for a more minimalist feel? Going a little more in depth in to this topic, I’d like a offer a few pros and cons of removing the insoles. Pros: Cons: Here are a few pictures of close-ups of the insole and the interior of the FORM with the insoles removed: