Evolution of an Ultrarunner in Five Fingers KSOs and TrekSports

What follows is the Jon’s journey from running marathons in traditional shoes to running them in Vibram Five Fingers KSOs an then later running Ultra Marathons in Five Fingers Trek Sports.

After the jump, read about his successes and the bumps he encountered along the way.

At the end of May 2010 I ran the Vermont City Marathon in my regular supported Brooks shoes. A few days later, I was slipping on my new VFF KSOs for my inaugural run through my neighborhood streets of Washington, DC and to the nearby Rock Creek National Park. In just four miles, I was hooked! As I eased into the new running shoe and technique, I picked up my mileage and ran longer and stronger than ever before. For once, I felt in touch and connected to my run. I even stopped listening to my iPod because I was more focused and did not feel that I needed to drown out the monotony that sometimes comes with long distance running. Since slipping on my VFFs the first days of June, I no longer have knee issues, my toenails look slightly better, and it has changed running for me, forever.

Following an amazing summer of increasing my mileage, speed and running a couple races in my KSOs, it was time to tackle my first ultramarathon. On September 28, I ran the Odyssey Trail Rampage 40 Miler in my fresh new pair of TrekSports. It was a great trail run at Douthat State Park, Virginia that consisted of three ~13 mile loops. I had a great time running the trails in my Vibrams, but it was definitely not a flawless race. I continually jammed my toes into the numerous roots and rocks on the trail, and inevitably busted a seam on one big toe and created a rip along the anti-rip protector on another. Fortunately, I had planned for this scenario and wrapped duct tape around my Chapstick which ended up saving the big toes from further destruction, and kept me moving forward to finish the race in fourth place. With Vibrams 90 day warranty on their shoes, I felt it was appropriate to return them back to the store since I had only put seventy miles in their one month life with me.

Finishing my first Ultra was a huge summer goal and major life accomplishment, but it didn’t stop there. When October rolled around I ran the Army 10 miler in my new pair of TrekSports. In this race I achieved a huge personal record and got a sub-one hour 10 miler which seemed to grab a bit of attention from my fellow runners because I was in “footies” as one person put it.

After the Army 10 miler I ran my first 50 miler in November called the Mountain Masochist Trail Run (MMTR) in Lynchburg, Virginia. I ran MMTR in my La Sportiva Skylite shoes, which I converted to be a zero drop trail running flat by cutting the heels down and having the rubber glued back on by a local cobbler in DC. 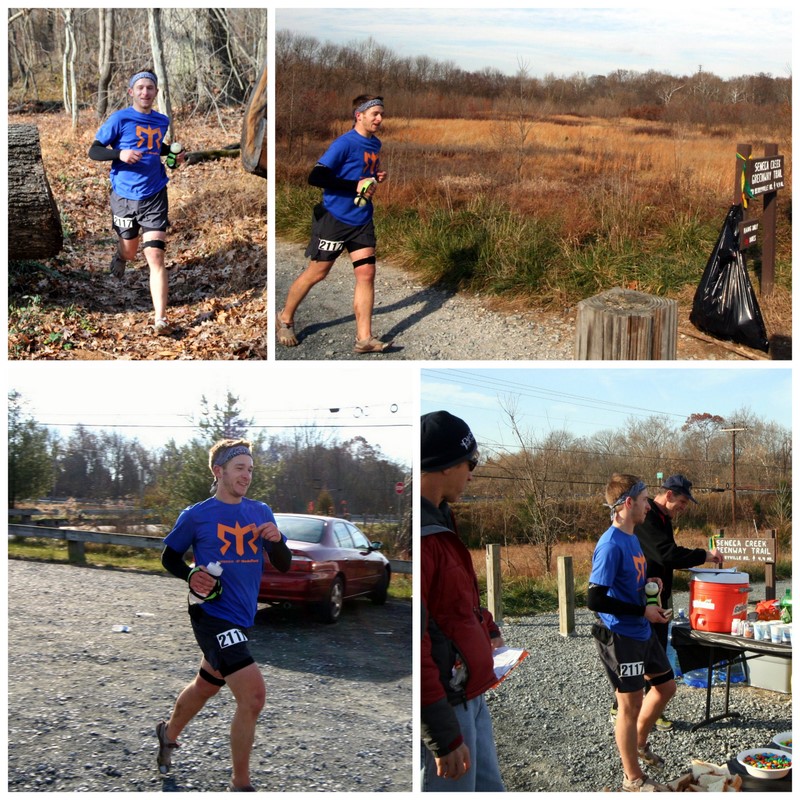 Jon running the Stone Mill 50 miler in his Trek Sports

Finally, I reached the day I was looking forward to the most. On November 20, I ran the inaugural Stone Mill 50 Miler in Damascus, Maryland with 125 other runners. The reason I was looking forward to this day the most was because it seemed like the most appropriate to wear my “Birthday Shoes” with it being my birthday and all. I ran the furthest I had ever gone in Vibrams, and did it in my new pair of TrekSports, due to the demise of my first pair that didn’t survive my first ultra in September. For this race, I thought ahead to solve my toe stubbing issues by pre-wrapping duct tape on the big toes and learned to lift up my feet a bit more.

The Stone Mill race was on a course that was 85% single track trail heading out and back from the start. The trail was great for running in Vibrams, but still had plenty of roots and obstacles to avoid, especially with fall leaves covering most of it. I came into the race accepting that I may not be able to finish it due to my severe IT Band issues returning after running the downhills of the MMTR with a lot of heel to toe striking (even with my converted trail flats). To my surprise and constant smile on my face, I ran the first 20 miles of the race in first or second place with a nice guy named Ron, who happened to be doing university research on minimal runners. Ron and I talked a bunch about all sorts of things, including the benefits of minimal running. Inevitably, my IT Band did flare up and pretty harshly, so I bid my farewell to Ron as I negotiated solutions to deal with my IT Band causing sharp pains. The solution to my IT Band came in the form of not stopping at all, and at aid stations, running in place to avoid letting my knee settle. I ended up having one more person pass me at mile 26 and maintained my position to finish the race in third.

It is possible to run over 26.2 and do it virtually barefoot and minimally. If you have read Born to Run and read about people like Barefoot Ted, you know there are a growing number of people running ultra marathons in minimal footwear. Minimal running does not make you invincible from injuries. I have dealt with small and large setbacks still. In the beginning, I bruised my feet a lot and just simply had sore feet from hitting the DC pavement. Before my first ultra I had Peroneal Tendon issues in my foot and have had top of the foot pains like many other minimal runners experience. Luckily, there is a fast growing knowledge base about minimal running with other people sharing identical pains/injuries and the potential solutions. The IT Band issues are recent, but more attributed to the fact that I ran two 50 mile races within two weeks of each other.

Jon soaking his feet in a cooler of ice water after finishing the Trail Rampage.

Feet dipped in a bucket full of ice and water is a must.

Jon, thanks for sharing your story. I had a similar ripped toe problem while trail running in my Trek Sports. Hopefully, Vibram will come up with a tougher upper.

BdayShoes is the "guest blogger" everyman (or woman!) of BirthdayShoes.com. Periodically, we feature original posts from non-regular writers on the blog here. Those posts get published under this user! If you're interested in contributing a one-off post to BirthdayShoes, contact us!