As a sprinter in college, Eugene would have never considered running distance, but after laying off a few years he decided to give it a try in Vibram Five Fingers Bikilas.

Read Eugene’s story after the jump!

The Joy of Running

I used to hate running long distances. I was a sprinter (100 meter dash) at the University of Southern California 15 years ago (1995-1999). And if you ask any former sprinter, the thought of running a mile is shear blasphemy. Even while growing up playing youth sports, I became indoctrinated with the notion that long distance running was a form of punishment that was only warranted if I goofed off or couldn’t do something right at practice. This caused me to despise distance running.

My athletic physique significantly deteriorated after I graduated college. I went law school, racked up over 2,000 billable hours for several consecutive years at reputable law firm, got married, and had two beautiful children. I gained over 40 lbs.

Now that I was overweight, with limited free time, and a hatred toward distance running, what would compel me to do a Half Ironman Triathlon (Showdown at Sundown) this past weekend? Easy, the Vibram Bikilas.

Less than a year ago, several attorneys at my office started running in the five finger shoes. I couldn’t understand why anyone would want to run barefoot. As they continued to deluge me with facts and figures about the benefits of barefoot running, I did what any good attorney would do – I did my own research. After three months of fairly intensive research on my free time, I came to the conclusion that barefoot running was the most efficient way for humans to run long distances. It forces you to be lighter on your feet, which naturally causes less impact on your knees and joints. You become lighter on your feet by landing on your forefoot (as opposed to heel striking), which acts like a suspension system because it allows your calves to absorb most of the impact. So I decided to give the five finger shoes a try.

Running in the five finger shoes was frustrating in the beginning. I couldn’t run more than a quarter mile without experiencing tightness or soreness in my calves. About a week later, I slowly built up to running a mile in the Bikilas about two or three times a week. At this point, I noticed that the joints and ligaments on my feet ached. About two weeks later, I ran between one to two miles several times a week. But I started to develop blisters on the bottom of my feet. And maybe a month later, I was able to run three miles in the Bikilas fairly regularly. I eventually got top of the foot pain, which subsequently subsided.

So why would I subject myself to this pain? The answer is simple: the Bikilas showed me the joy of running. All of the sudden, running felt so natural and fluid. I was willing to exchange a few months of temporary aches and pains for the permanency of a smooth and efficient running stride. More importantly, the ease of running in the Bikilas allowed me to “smell the roses.” I wasn’t focused on times and splits like in college. I just ran for the sake of running, to get some fresh air, and to feel good about myself. I couldn’t believe how much I enjoyed running.

As I continued to build on my mileage, I decided to do the Showdown at Sundown Half Ironman in Las Vegas. I trained for four months. In addition to swimming and biking, I would run anywhere from 20 to 40 miles per week. I enjoyed running so much that I would look for any opportunity to slip in a quick run before my family woke up, during my lunch break, or immediately before dinner. As I ran past other runners in their shod shoes that looked like zombies drudging through another run, I became grateful that I found a genuine passion for running, which made everything so much easier and enjoyable. 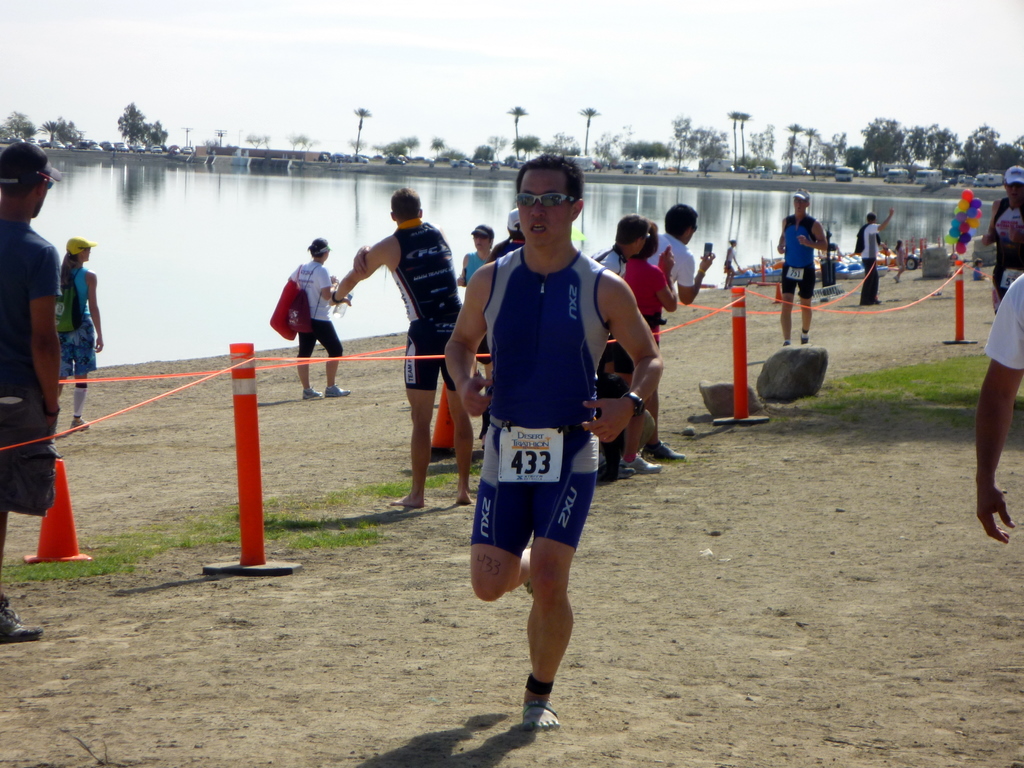 Eugene running in the Desert Triathlon.

Before the Showdown at Sundown Half Ironman, I participated in the Desert Triathlon in Palm Springs in order to get familiar with the triathlon process. It was an amazing experience. I did a ¾ mile swim in 30 minutes, a 24 mile bike in 1:08:32, and a 6 mile run in 49:48. This was the first step in converting from a sprinter to an endurance athlete.

About three weeks later, I did the Showdown at Sundown Half Ironman. The swim was cancelled because the water was too cold (50 degrees). I finished a grueling 56 mile bike course in 3:51:15. Even though my legs felt like jello after the bike, I put on my Vibram Bikilas and proceeded to run 13.1 miles. This was the first time I felt the “runner’s high.” I was able to run at an 8:30/mile without any difficulty. I was passing runners with ease. But then my hamstring or calf would cramp. For each cramp, I’d stop for 3-5 minutes. At the end, I finished the half marathon in 2:22:21. Overall, I finished 9th place in my age group with a time of 6:13:36. But once again, I’m not too concerned with time. I just loved being out there running in my Bikilas!

The best part of the Showdown at Sundown Half Ironman were the comments I got from the Bikilas.

Eugene, thanks for sharing your comeback with us!