How to Run in Vibram Five Fingers, Barefoot, or in Other Minimalist Footwear (a.k.a. "Barefoot Shoes") seeya

I recently had the opportunity to race the inaugural Ironman New York City triathlon. I ran the marathon portion in Vibram SeeYas, which have easily become my go-to FiveFinger model for running. Overall the race went very well and I hit all of my goals:

Read on to see how I fared! 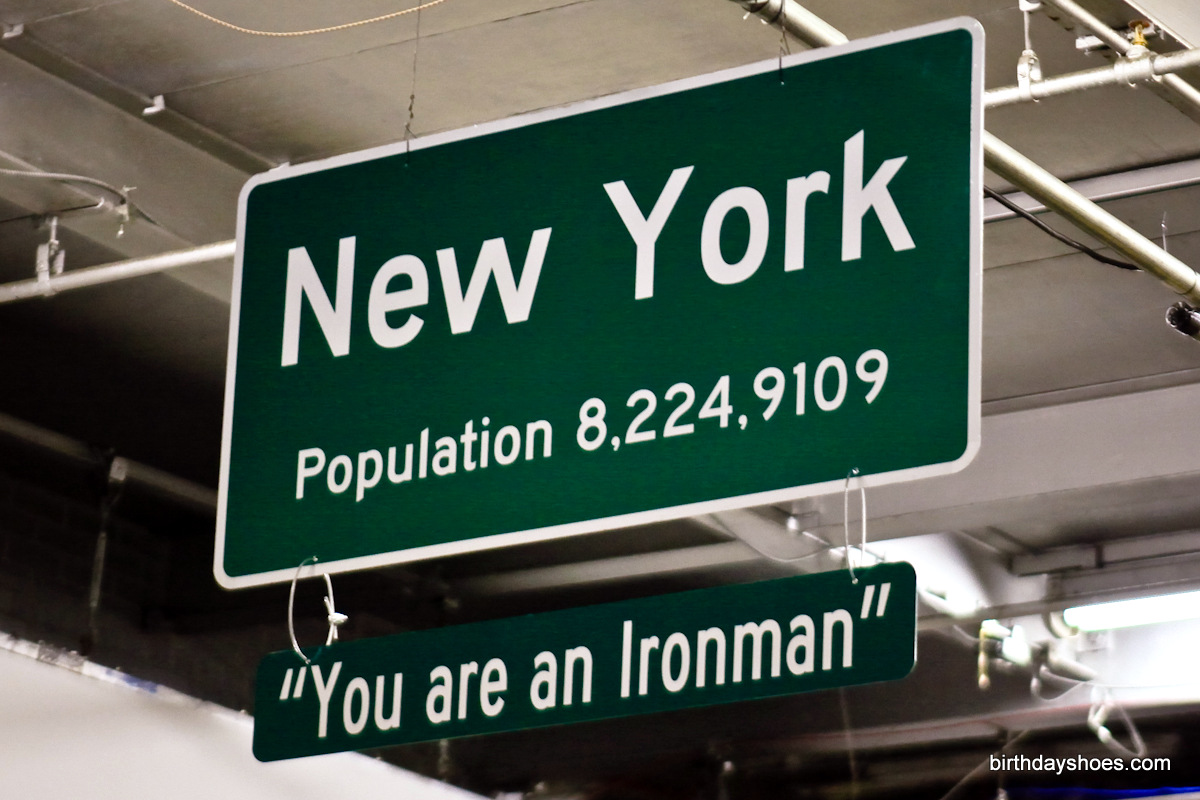 Sign at the Welcome Banquet—don’t ask me what the extra digit is for!

The swim was downstream in the Hudson River and with it being my weakest event, I waited to be one of the last ones into the water so that the current would pick up as much as possible in my favor. The current was moving quickly and I was putting in very little effort and was absolutely flying. I came out of the water in 52 minutes—usually my swim for that distance would be about 1:20!

The transition from swim to bike was smooth and I was quickly riding two loops on the Palisades Parkway. There were lots of long steady ups and long steady downs and not many flat sections. I had some stomach issues with my nutrition and ended up not being able to eat much solid food and stuck to gels, blocks, and other course nutrition. I knew the run course would be difficult so I tried to ride below my level while still coming in under 6 hours. I hit the timing mat at 5:56, right on schedule! 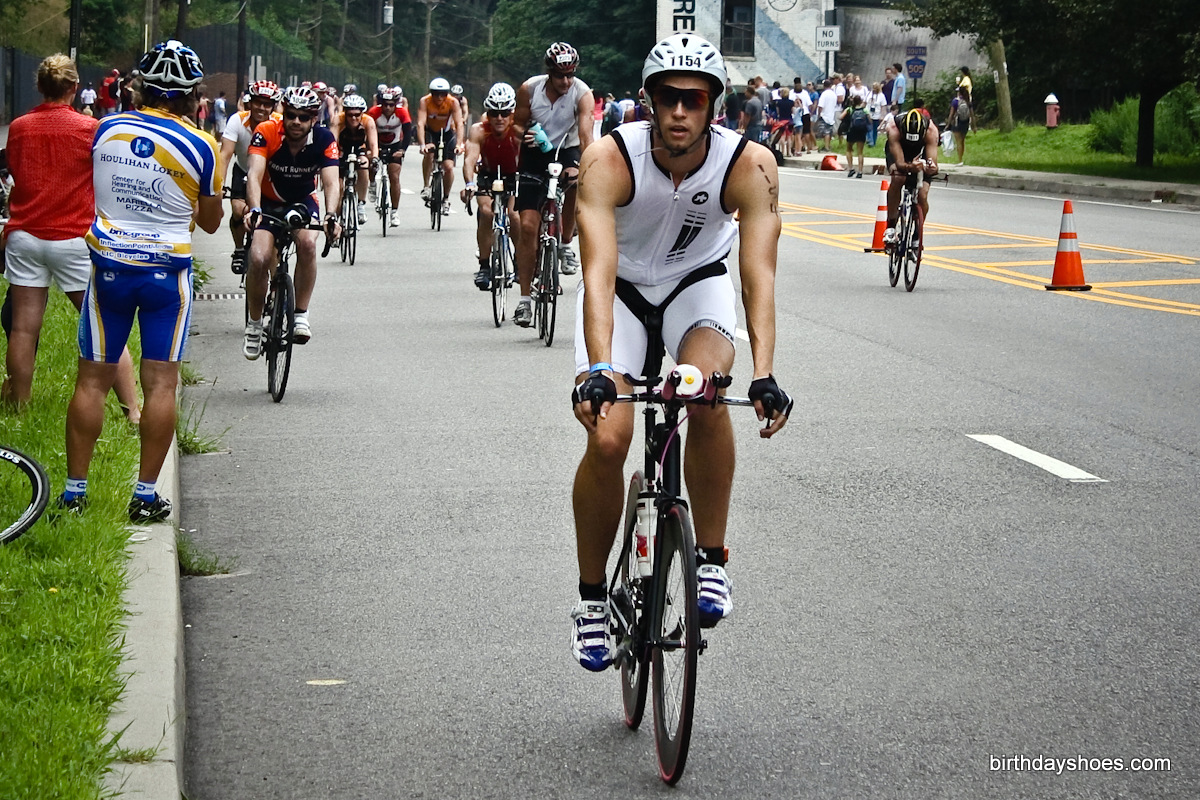 Tearing it up on the course!

The second transition was easy enough, even with doing a change into running clothes complete with a putting a pair of Original weight Injinji socks and Vibram SeeYas on sweaty feet. The run course was quite challenging with the first half being 16 miles of steep hills. A number Pros commented after the race that it was one of the hardest runs they’d done. I power walked the hills and picked up the pace a bit on the down hills. To hit my reach finishing goal, I knew that I was doing well but would have to run a very consistent marathon—from mile 2 I was constantly doing mental math, calculating just how slowly I could run and still make my time.

At one point during the run, I got stung by a bee inside my mouth at the back of my throat. I was running, breathing with my mouth open and a Yellow Jacket flew right in. I immediately gagged and spit it out, but the stinger was stuck in the back of my throat and swishing water around wasn’t working to dislodge it. I ended up sticking a finger down my throat, causing me to double over dry heaving by the side of the run course, but I was able to scrape the stinger off with a finger nail. I popped a pain killer, tried to ignore the slight swelling, and kept going. 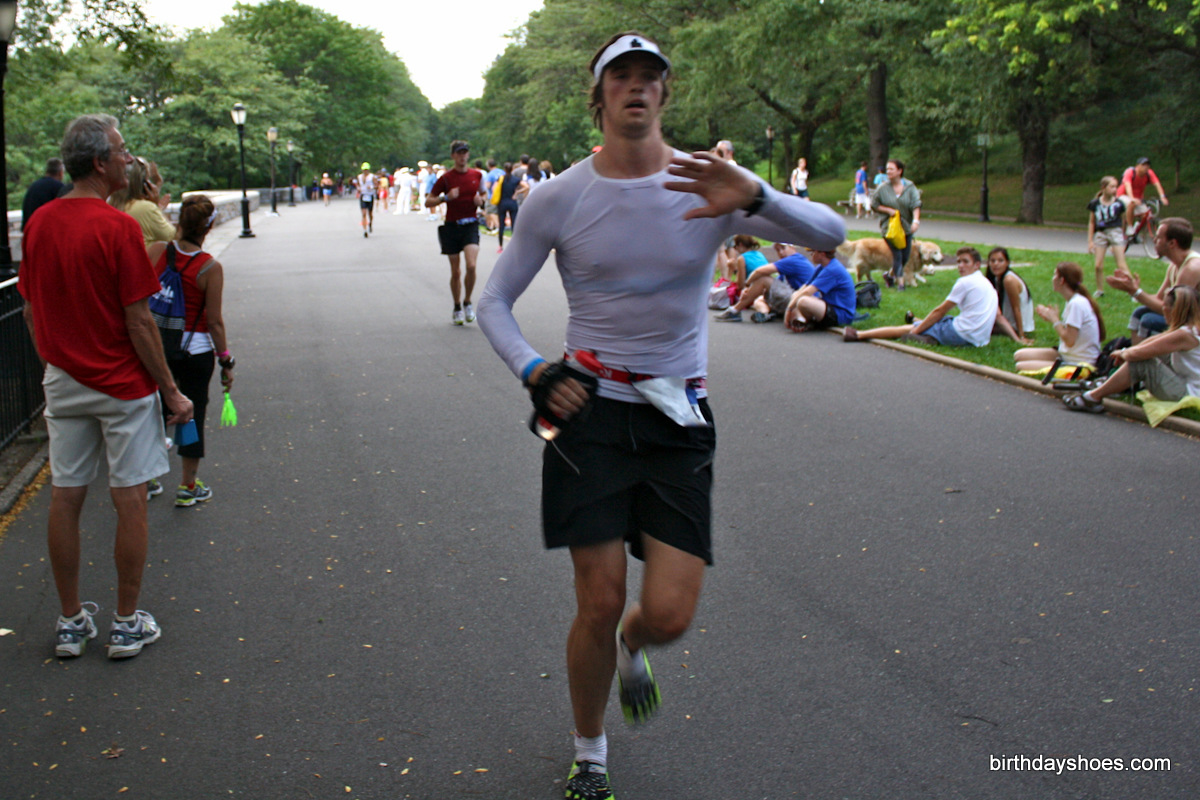 The SeeYas performed as best as they possibly could, meaning that I didn’t think about my footwear at all. No rubbing, hotspots, or blisters. Yes, my feet hurt, but not any more than anyone else running a marathon after swimming and biking. At one point I realized an advantage of the VFFs as I passed someone in traditional running shoes who was slogging through the course with soaking wet shoes. One method for keeping cool that athletes were using was to dump ice water over their heads, effectively soaking themselves from head to toe. I was thankful that the SeeYa’s managed draining the water well and that they dried quickly. I finished the hot and hilly run in 4:53 with a total race time of 11:55:55. I even had a few minutes to spare! 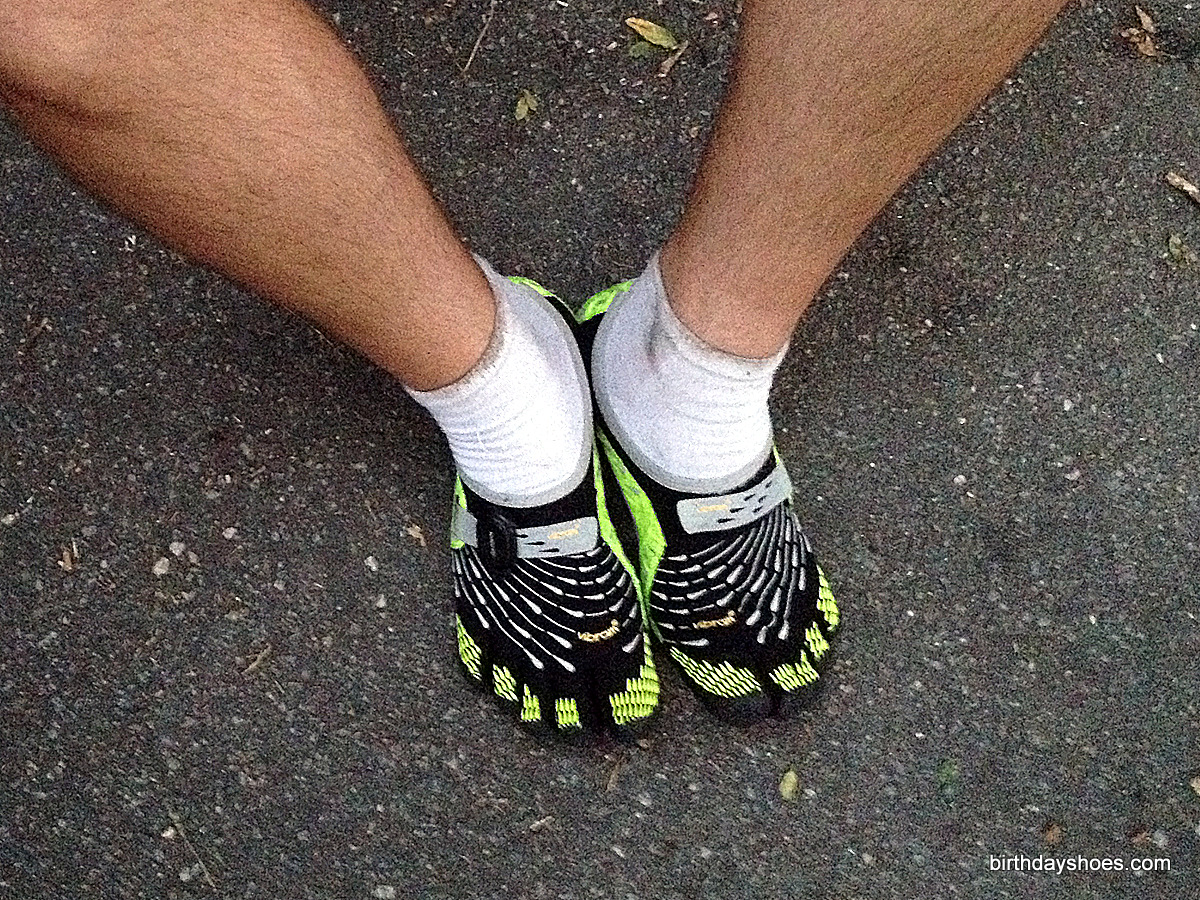 I spotted two other VFF runners during the race—one in Spyridons who was wearing two GoPro cameras on their head, and another in what looked to be KSOs who had ridden the bike course on a single-speed bike and was running in cargo shorts and a white button down shirt.

Now with a successful Ironman NYC in the books, it’s now time to take some time off from training and enjoy the last of the summer!