It’s no secret that I love me some Lunas. I’ve tested their socks for the first time on race day with no prior experience with them, because I trust Luna that much. Then I ran my first marathon in Luna Venados. But I’ll be honest: I wasn’t entirely looking forward to the Monos. I had the same thought that a few other huaraches devotees had when they saw the early pictures: too thick. 11-12mm? Seriously? Well they came out this past Monday, and the monkeys over at Luna were nice enough to send me a pair to review. Read on to see if they managed to subdue my skepticism. 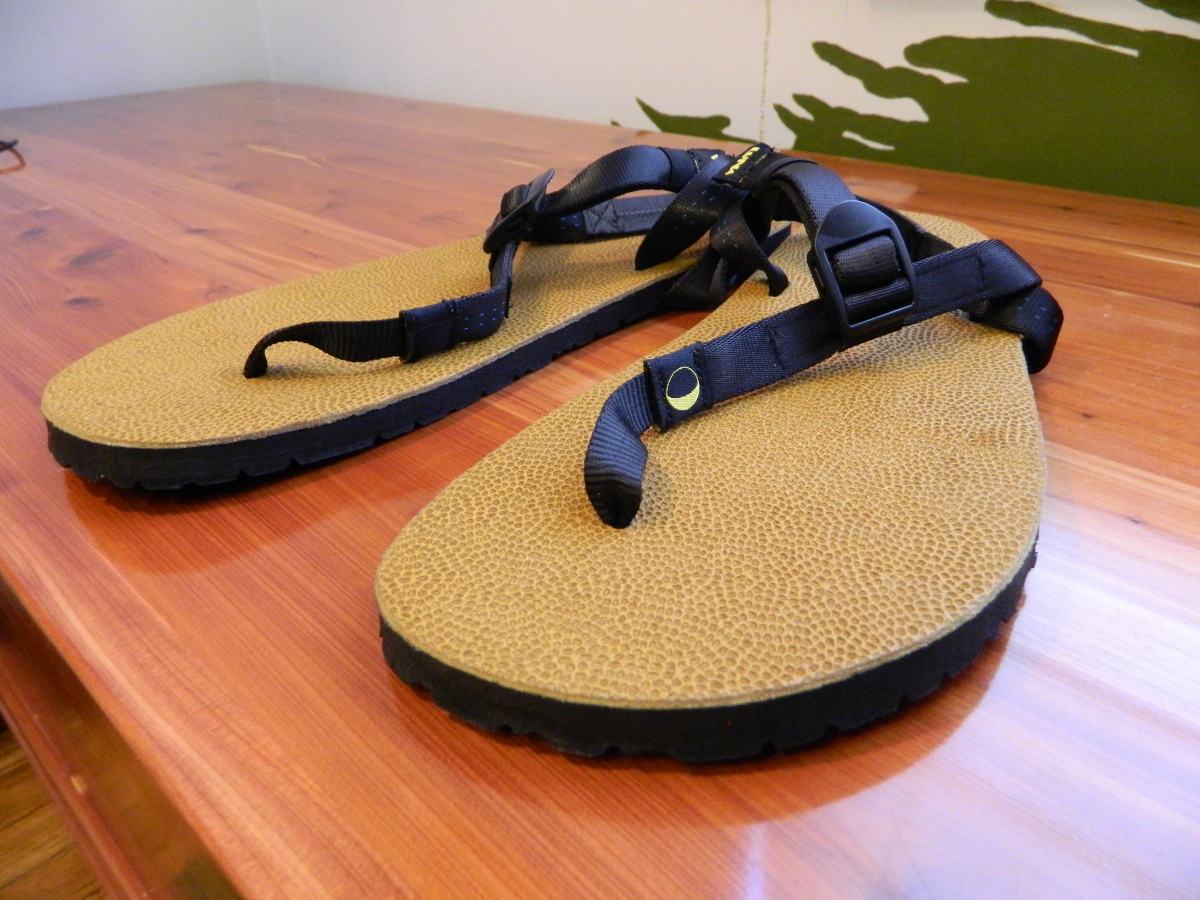 From Luna’s most recent newsletter:

We often get asked which sandal model is best for use on both trails and roads. While the Original Luna is ultra-sleek, super minimal, and great for road running; and the Leadville (and soon-to-be-released Oso) are optimal for tough trails and wet weather; we’ve never had a sandal that handled a wide variety of surface with equal aplomb — until now! The Mono gives us everything we want from a single sandal model. It’s tread won’t wear out as fast on pavement as the Leadville, and it’s added thickness provides more protection than the Original Luna.

And from a previous pitch:

At 11-12mm, It’s a bit thicker than the Original Luna, but it’s very light and quickly molds to your feet like a big, comfy foot hug.

With that kind of thickness the Mono matches what had to this point been their thickest sandal, the Leadville. But with the upcoming release of the even thicker Oso model, the Mono will instead be in the middle of the pack of their thickness offerings as opposed to the upper limit. It’s safe to say at this point that Luna is trying to appeal to ever more customers. With each change in their lineup the average thickness of their sandal lineup increases. I’ll admit that it worries me a bit to see them getting bigger rather than smaller. But it is still a business we’re talking about here, so I’m trying not to take this change personally. I know I’m being a little too hard on Luna from that angle, and I really shouldn’t be. My first pair of Luna Leadvilles are STILL my favorite every day shoe despite being similarly sized. So with that in mind and the similar thickness/style between the two, I’m going to focus on the differences. Check out my Leadville review for more background.

First up, though, something not specific to the Mono but is a recent option available for all models: a new foot bed offering. Pittards Premium Leather foot bed. Oooooh. Ahhhhh. Very fancy. Seriously. I’m fond of my previous generation Luna Venados with the suede footbed, but moisture was always a problem. The suede all but disintegrated if you ran in them in wet conditions. The MGT footbed was better, if less elegant. The premium leather option splits the difference to offer a comfortable, functional sandal with more moisture protection — all while maintaining a more stylish look. This is indeed a comfy foot bed. The MGT foot bed still handles water the best of all, but the new Pittards option is leaps and bounds better than the suede in almost every way. (Unless you just prefer the feel of suede particularly.)

Next up: the sole. The similarly-sized Leadville was notable for its classic aggressive tread style. The Venado, meanwhile, had pretty much no tread. The Mono falls in the middle here, with a sole design that offers some pattern to it. I think the pattern here says a lot: this isn’t an uber-minimalist, treadless style a la the Venado, but neither is it an aggressive hiking and trail running shoe a la the Leadville. It lines itself up solidly in the middle, right where Luna was aiming in both form and function. The look of the Mono on your feet isn’t going to be significantly different than wearing any of the other models. Wear a Leadville on one foot and a Mono on the other and you won’t be able to tell the difference by look alone. You have to look at the sole or try them on to figure it out. Trying it on is where I really noticed the difference. The Mono is by no means a “padded” shoe, but I definitely felt a little more “squish” to the Mono sole than I felt in the otherwise similar Leadville. This isn’t just an issue of newness, either — the pair of Leadvilles I compared it to are also brand new. Though I felt like a traitor to myself, I must admit that I liked this ever-so-slight bit of extra softness.

I found myself less inclined to run in the Mono. Not because it wouldn’t function well as such — it did in fact do quite well in my tests. But on any given day I typically choose which huaraches I’m going to wear based on the conditions in which I’ll be running. Tough technical trail? Leadville. Road running? Venado/original. Given the thickness and moderate tread, I’d recommend these for running primarily in the case of relative newbies to huaraches. Now how about general wear… 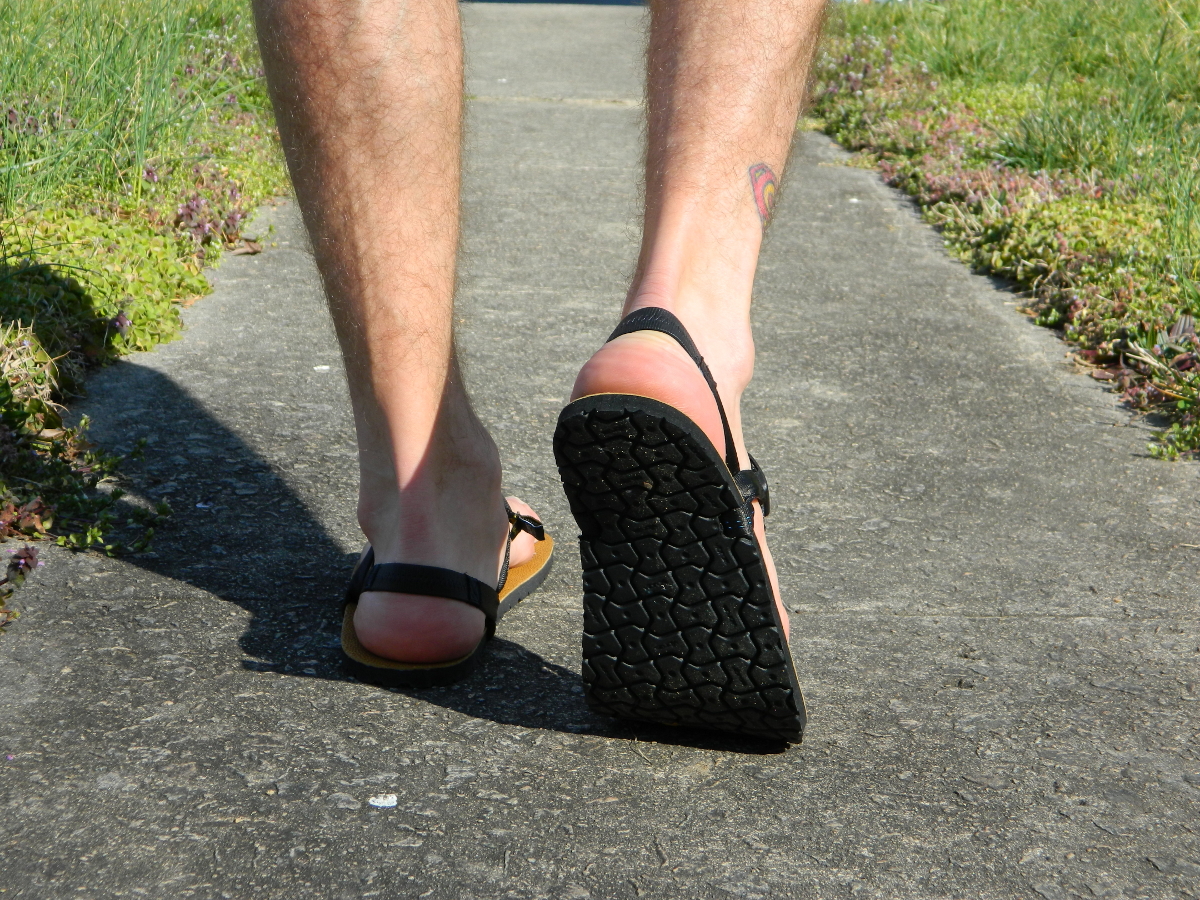 Despite the added thickness, a single Mono sandal in size 9 is only about 0.7 oz heavier (4.6) than the thinner Venado (3.9). I really liked this. Despite my hesitation over the added thickness, the light weight of the sandal helped smooth over much of my worry. I was a Birkenstock and Chacos devotee in a previous life, so I appreciate a pair of well-made sandals. But the ones I love the most are always relatively light, whatever their style. All of my observations and nitpicks aside, I want to be sure to point out something very important: with the Mono, Luna was aiming to build the best all-around sandal that they could. On this point — the main point — they succeeded. When I travel I like to pack light, and having large feet often causes problems in this department. So I typically pack shoes based on the broadest usability. The Mono can go from running sandal to casual wear more easily than any of their other models thus far, without a doubt. The Mono, then, gets a big win here in terms of maximum utility.

I’ve already shared what few and gentle gripes I have. And of those, none are flaws in design or failures to deliver on promises — but are instead more matters of preference and approach. But while I do personally prefer thinner sandals, I cannot fault the creation of a thicker model to reach a bigger crowd. Quite simply, these are top-notch all-purpose sandals. While I will continue to run roads in my Venados and blaze trails in my Leadvilles, the Monos have supplanted both for everyday wear and travel.

What makes the Mono different from the Leadville can be summed up quite briefly: the Mono has a more relaxed tread and is slightly softer and lighter. If you’re well versed in barefoot and minimalist running you might find the Mono to be a bit more than you need. Though the Mono might still be worth a look for its versatility. But if you definitely don’t know where to start, I’d say start here. You can’t find a better easy and comfortable introduction to running, walking, and exploring in huaraches than the Luna Mono. [You can pick up a pair for yourself over at Luna’s website.]