Updated daily with new listings of fake retailers — in addition to the fakers gaming Google Search results, they are also actively using Google Ads to hawk their fake product. If you see any fake fingers sites appearing in Google Ads on this site, let us know immediately so we can block these ads from appearing!

I have some bad news: there are Fake, non-Vibram Five Fingers at large masquerading as our favorite five-toed shoes. These pirated copies are duping would-be VFF fans into buying low quality, black market goods, sometimes at pretty high prices.

The graphic adorning the top of this post is a collage of many (though not all) of the Vibram Five Fingers fakes that are being hawked over the Internet. These imitations are being marketed not only as legitimate “Vibram Five Fingers,” but also under other brand names such as “Mupuk Five Fingers” or “Tefta Five Fingers.” These are not the real deal! Left to speculate, I can only assume that these forgeries represent “third shift” (or “gray market”) production from China that is making it’s way to virtual storefronts like eBay, but also cropping up on other, ostensibly legit websites.

I’m sure Vibram is actively trying to stop these deceptive practices in their tracks—Update: Vibram has posted this notice at the top of vibramfivefingers.com (screenshot); also, they’ve got a section of the site that speaks to the fakes (Go here). However, with international law being a can of worms, speedily shutting these guys down will take time. The only surefire way to protect yourself from fakes is to be informed.

How can you spot a fake?

Fortunately, across the main three categories of fake Five Fingers, there appear to be some common, easy-to-spot discrepancies in production materials.

The strap material is also more glossy as compared to the matte finish you see with regular KSOs or Sprints. Also, some of the strap buckles on knock-offs appear to be using metal — this is not normal!

It seems these knock-off Five Fingers usually don’t reproduce the design features the same as real Vibrams. For example, one fake appears to use a Flow upper with the Sprint strap design.

The authentic Vibram Five Fingers models and colors have been exhaustively covered on this site. In addition to familiarizing yourself with available colors and models over at VibramFiveFingers.com, you can glance over the Vibram Five Fingers category or check out the KSO guide or the Classics guide. Take note of available colors and styles (designs). For the latest news on upcoming models and colors, check the news.

Also, familiarize yourself with the known fakes. Here is the above collage in a much larger image format so you can examine the fakes up close (Right click and open in a new window).

If you’re on a website that is selling Vibram Five Fingers to U.S. buyers, look for a physical address. If the site indicates it will be shipping you the product from some place around the world, raise an eyebrow! If said online retailer appears to be only selling Five Fingers (and no other products), this is a red flag!

Outside of the U.S., as far as I can tell, Vibram Europe keeps close tabs on their distributors and retailers of Vibram Five Fingers. Simply look for signs of legitimacy on any online stores. If you’re concerned a specific site may be fake, check the domain via WhoIs.net. If it’s owned by, hosted from, or otherwise operated out of China (often denoted by a .cn somewhere in there) direct your mouse to the “X” button on your browser!

This is a bit simpler in the U.S., but if you see some crazy pricing (e.g. “$185 $80 — 57% off!”), get suspicious! VFFs rarely go on sale as the demand for them is so high. UPDATE August 2012: This sorta isn’t true any more. Once Vibram caught production up to demand, it seems that we’ve seen the advent of sales on legitimate FiveFingers and sales sometimes up to 50% off. Seriously. It’s usually on the stuff that is either being discontinued or colorways that are being killed off to make way for new styles/colors. These days, we try to make a habit of alerting readers about big sales on FiveFingers (and other minimalist sales). We do this via the occasional sales blog posts but more deliberately to email subscribers. If you’re interested in getting these very occasional alerts (weekly), subscribe by email!

If the sites have a lot of bad grammar, this could be a tell. 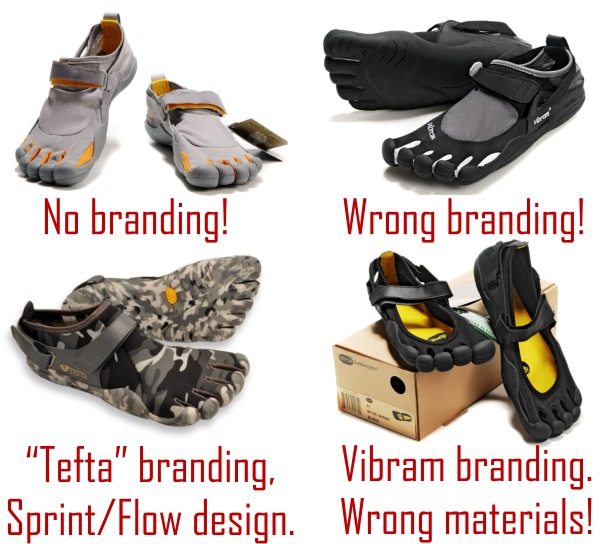 Four different fake Five Fingers that each illustrate a different “tell” that they are fakes, though the last is the most convincing (and deceiving!).

All authentic Vibram Five Fingers are going to have the Vibram yellow octagon stamp on their sole. Additionally, any “Vibram” branding should be yellow (and not white or blue or some other color).

Meanwhile, if what you’re seeing looks like Five Fingers but has no Vibram branding, odds are you’re looking at a fake! That said, presence of branding as in the case of the last fake-Sprint VFF does not guarantee legitimacy. In these cases (so far seen almost all in the Sprint configuration), you have to fall back on the general tips like materials used, unusual color combinations, strange construction, apparent legitimacy of the retailer’s website, etc.!

Many of these fakes are making it onto ebay. Reality is that no legitimate retailer of VFFs is allowed to sell Five Fingers on ebay! So apart from one-off ebayers trying to unload a single pair here and there, be very suspicious of ebayer resellers who are selling five fingers! This forum thread is attempting to put a stop to them!

I refuse to put live links to these sites as the last thing I want to do is help them out in the eyes of Google.

Here is a list of known fake Five Fingers retailers:

now of, please let me know!

Note 1: many of these sites have put “vibram” in their domain name — this is a red flag!

Note 3: In each WhoIs case, there are indications the sites are operated out of China.

Note 4: In the case of vibram-five-fingers.cc, they are commingling known fakes with real product. No legit retailer would do this!

In the end, the reason to call attention to fakes is to prevent would-be fans of Five Fingers from paying a lot of money and buying a product that isn’t designed or manufactured to the specifications that make the product great — and outside of the neoprene issue, virtually every person who has reported they bought fakes has echoed a common thread — they’re not up to the same quality as the real deal (1) and (2) they often don’t fit right or have other issues.

A separate problem is that different materials materially change the design of the shoe. A solid example of this is that as any Flow owner will tell you, neoprene dramatically changes the feel of a pair of Five Fingers. Meanwhile, these knock-offs have no recourse or warranty should the customer be dissatisfied or find production.

All of this says says nothing of the simple truth that these imitations are being manufactured and sold by a “retailer” who is blatantly defrauding people — yes, it is fraud when you hold yourself out as someone else (and borrow the reputation of someone else) in order to profit.

So it’s important to inform others about fake VFFs to prevent customers from being duped and ultimately kicked to the curb, dissatisfied with what could have been a foot freeing experience. That’d be a tragedy, don’t you think?

H/T to witchkitty for her help on finding more fake retailers!

That said, I appreciate all comments alerting me to suspected fake sites that aren’t on this list. I am constantly updating this list for new sites. BUT most of the time I’m only discovering new sites via comments, so please do let me know if you’ve found a suspected site that isn’t on the list — but you’re probably better off assuming it’s fake (and letting me know) by saying “I think vibramfivefingersaregreatat50percentoff.com is fake.”

This helps keep me sane (1) and it will prevent you having to wonder further if the site you found is fake (2). Thanks!