You might recall an episode of Saturday Night Live that originally aired back in mid-November of 2005 (Jason Lee, Season 31). If you didn’t see it then (I don’t think I did), no doubt you’ll find Andy Samberg’s song about “J.J. Casuals” particularly funny today.

In case the video is forced offline (Network television is prone to do such things!), here’s a screencap from the skit, which sort of gives away the punchline (albeit without Samberg’s funny Jack-Johnson-inspired singing): 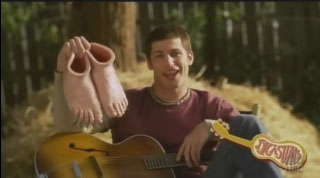 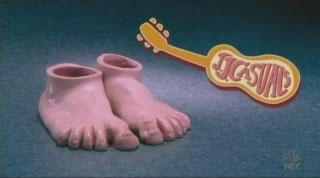 I have to admit that this tune has been stuck in my head ever since watching this video. Keep it casual, whatever!

One point of interest: this skit aired a couple months before the Vibram Five Fingers official website was made public*. No doubt Vibram was already well under way on rolling out fivefingers when this SNL episode originally aired. Even so, this skit makes for a funny incidence of art mimicking life or vice versa. Does Andy Samberg know about fivefingers? What about Jack Johnson?

Can ya dig it? Shoes that look like feet!

Some more episode factoids and a couple screencaps from NBC here.

* The first archived version of vibramfivefingers.com dates back to January 2006 (Per archive.org)