How to Run in Vibram Five Fingers, Barefoot, or in Other Minimalist Footwear (a.k.a. "Barefoot Shoes") soft star

We all know Murphy’s Law. And it has several corollaries. I learned one during training for the Half. Call it Jay’s Corollary: If you are going to experience some kind of injury or just some weird pain, it will happen half-way through your training run. If your plan is to run six miles, then the stabbing ankle pain will start stabbing at mile three. On your ten-mile run, the weird pinching pain in your hip will drop like a judge’s gavel just before mile six.

Thus ensuring you have to make one of those lose-lose situations. You’re as far from sanctuary as possible, so what do you do? Power through it — which means try and run though it looks like you have crab DNA taking over your body — the rest of the way home. Or stop and walk, which will turn your one-hour run before dinner into a three-hour ordeal, with plenty of time to think all sorts of negative thoughts as you limp home. I suppose you could call a loved one or a friend. If you’re a coward, I mean.

The worst for me was this hip thing. I’d never experienced anything like it, and it only shows up at about mile six for me. And it shows up without warning. I say hip, but maybe pelvis is more appropriate. Right in front, where my leg bends upward at the hip. I would describe it as a grinding and pinching sensation, and it makes lifting my thigh to a horizontal position a horrible proposition. Which is too bad since leg-lifting is kinda important to running. My thigh-lifting muscle and it’s associated tendons and ligaments, whatever that group is called, also may have just been dead. Just standing still it was difficult to lift my leg in front of me.

Self-diagnoses of new problems are comical. I felt like I wanted to lay down and have someone pull my legs out, like if I was being drawn and quartered. To make it better, there was a nice Asian lady in a giant wicker hat speed walking by me. I’d passed her before the hip/pelvis thing happened, and then she stormed by me, arms-a-swingin’, when I stopped to assess the damage and decide to “power through”. I stretched out my hips in of those hip turn-out kind of stretches. The stretch, or maybe the rest while stretching, helped a bit, and I started jogging on again with an atrocious-looking gait. I passed the Hat Lady again. Then couldn’t lift my leg. Hat Lady and I played leap frog about five more times before I finally hit some sort of rhythm or gait or physiological change that allowed me to run steadily, if uncomfortably.

I found that on each successive long run in prep for the actual race, the hip problem would still show up around the same mileage, but with less severity. I also did more stretches geared toward my hips. If you know any yoga animals, I was doing Frog and Pigeon poses throughout the week. 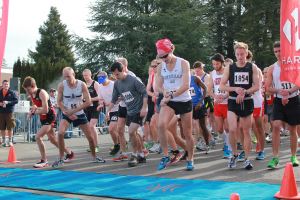 The fast people in the front, all setting their watches at the start.

Race day, the Corvallis Half Marathon. It was cold-ish in the morning, but shaping up to be a near perfect day for a long run. My longest training run was 10 miles, but Hal Higdon’s training plan said I would get through miles 11 to 13 on “adrenaline”. My average pace for runs over eight miles ranged from 9:45 to 11:00. So my plan was to try and finish under a 10-minute pace. Music? Mostly no. I went with NPR. I’m 40 and responsible, so why not? “Wait, Wait …” and “Car Talk.” Kicks? My hornet-colored Dash mocs that I’d used for all my training runs.

Speaking of mocs, I was amazed to see a pair of SoftStar mocs I’d never seen. I mean, being married to an owner kinda makes me an owner, and they have a special drawer of patterns to deal with my duck-like feet. But Bruce was sporting a specialized version of the Moc3. I admit I was pretty darn jealous. 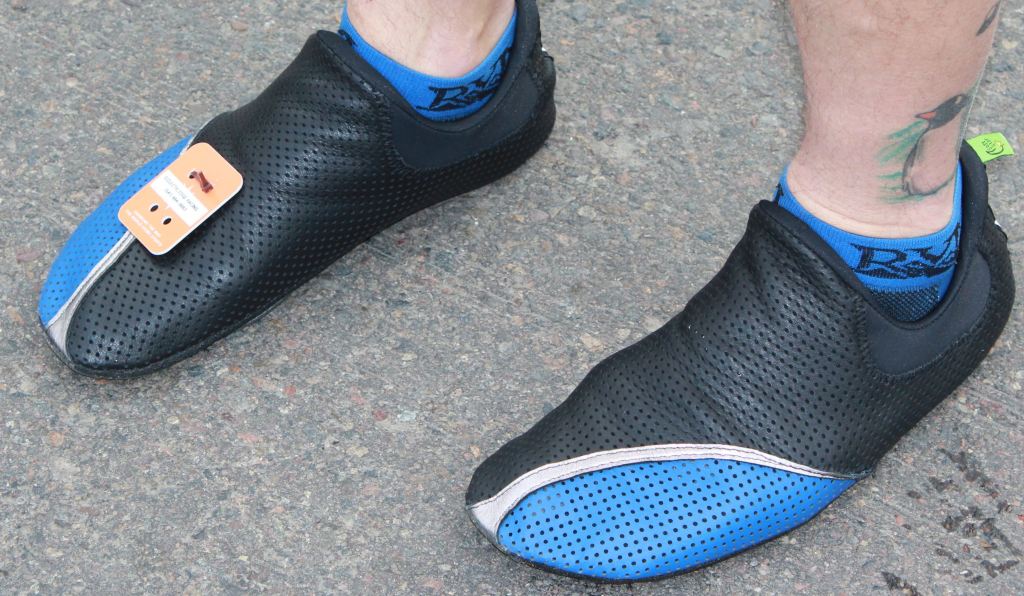 Sweet design tweak to the Moc3! 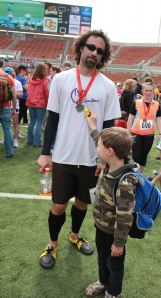 After 13 miles of running, my 6-year old drives a toy car on me. He may be trying to tell me something.

The run. It’s remarkable to see so many people running at the same time. And also so many great volunteers and just people cheering. And since it’s a small town, I saw lots of people I knew. It’s a cool vibe and I can see why people come back to these runs. The feel-good feeling was strong enough that at mile 11 I actually took candy from a stranger and ate it. They looked like Life Savers but they were a gel. I assume (and hope) that it was some kind of energy gel.

Back on mile 8 my hip/pelvis discomfort started, but I was ready for it. I still don’t really understand it, but I adjusted my gait and was uncomfortable until about mile 10 and then it subsided and I felt fine. And by ‘fine’ I mean my feet were sore and I was really tired but I could carry on a comfortable pace. At mile 11, I was surprised to feel something like a second wind. From then onward I felt like I could take it up a notch, and the last three miles I ran at almost a 9:00 pace.

The best thing about the Corvallis Half Marathon is that you finish on springy artificial football field in OSU’s Reser Stadium. Since I was feeling good, I did something that felt like sprinting from the endzone to the 50-yard line finish. There’s something about running into a stadium and then out onto the field. It was a great feeling. And, honestly, it felt good to stop running!

I’ll definitely plan on running it next year, but I’d really now like to find a race that goes over the river and through the woods, if not to grandma’s house.