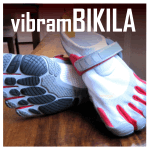 (All of which is now old news to the forum members) 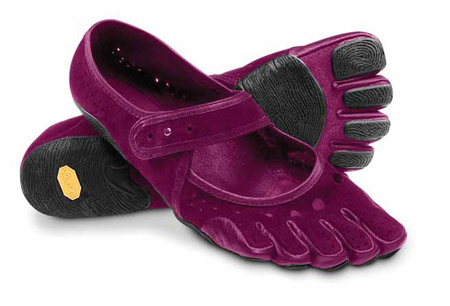 A few astute VFF fans probably already noticed the Performa Jane—you could have spotted it at the tail-end of RawFoodWorld’s interview with Vibram President Tony Post (Go here and fast-forward to around 7:25 in the video). The women’s only, single-strapped Performa Jane is aptly named as it’s nearest shoe counterpart is the “Mary Jane.” It looks as though the Performa Jane is another (indoor specific) option for Pilates and Yoga. The Jane, like the now-available standard Performa, has the seven-part, ultra-minimal podded sole and will be made out of leather.

In addition to the purplish color above, it looks like the Performa Jane will also be available in black!

Above is pictured the sole of the upcoming 2010 fivefingers Bikila. Note that the arch portion is EVA.

We first got a good look at the upcoming Vibram fivefingers Bikila a couple months back. I know of at least a few runners (ahem Alan!) who are already dying to get their hands on a pair of these runnning-specific VFFs. Today, we get to see a closer look at the new Vibram sole design of the Bikila (and that of the Speed).

Here there are a few things worth pointing out:

Of course, as the fivefingers Bikila won’t be ready until early 2010, we’ve still got awhile to speculate as to how it will perform. Clearly, Vibram has put a lot of thought into creating a running-specific VFF that strikes a balance between enabling the foot to run naturally while still providing some amount of protection. It will be exciting to see how this balance plays out!

And finally, an update on the European-release only fivefingers Speed 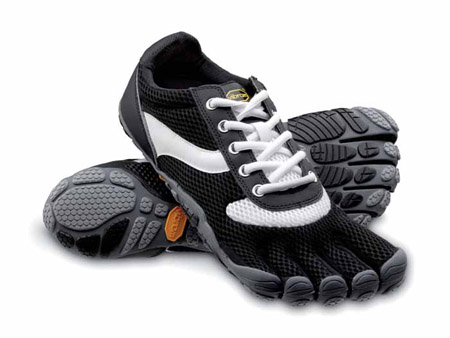 The 2010 European-release only fivefingers Speed sports a mesh upper and laces, which would be a boon for individuals with high insteps.

We first saw a leaked photo of the Euro-only fivefingers Speed back in late July. At the time, reception was mixed—laces being the most noteworthy departure from the more standard VFF velcro-strap system, the Speeds looked a bit different.

From an aesthetic standpoint, the stock photo above actually shows how a laced-up fivefingers could look, dare I say it, stylish. Yes, it’s grown on me a lot since I saw that first photo and I now think the Speed looks cool.

Setting aesthetics aside, there is also a compelling case to be made for the fivefingers Speed’s laced design. One of the difficulties Vibram has had to overcome in designing fivefingers has been to create a standard “foot” shape that can work for all the variations in feet—thickness of toes, variations in arch heights, curve of toes/toe length, width of feet, etc. For the average foot, VFFs can be sized and fitted within a certain tolerance so the wearer is comfortable. But for those individuals on the fringe of the “foot bell curve,” sizing and fit starts breaking down*.

In particular, there are a number of VFFers who struggle with either high insteps or high arches. These issues can make fitting into enclosed-style VFFs difficult: there’s only so much the mesh design can stretch to accommodate feet on the fringes.

Really, it’s this foot issue that makes laces a great solution: they enable you to customize the tightness and fit of the upper to your foot. In other words, a compelling case could be made for laced VFFs.

Alas, as the Speed is a 2010 Euro-only release, I don’t know if I’ll be able to get my feet in a pair. Then again, this community is big enough maybe I can get a hook-up from across the Atlantic!

It’s clear Vibram continues to respond to community feedback to try and provide new and innovative barefoot-like solutions for the minimalist footwear and barefooting community, and these new additions to the line-up, the Bikila, Speed, and Performa Jane, all look like compelling new VFFs. For now, we’ll all just have to enjoy the recently released KSO Trek, Moc, and Performa!

Finally, if you want a sneak peak at a bit more, check out this forum thread! Hat tip to Corin, Ryan, and Mieke for all passing on information leading to the above post!

* Check out the current BirthdayShoes wiki entry on sizing and fit!