Back in late July 2009 we first glanced a laced Vibram Five Fingers shoe (Not to mention the running-specific Five Fingers Bikila next to it), many a fan’s mind reeled at the notion — what is that thing? Laces? Are we looking at Al Bundy’s “God’s Shoes?”

After the jump are photos, video, and thoughts about the novel, stylish, and ground-breaking laced Vibram Five Fingers — the Speed! 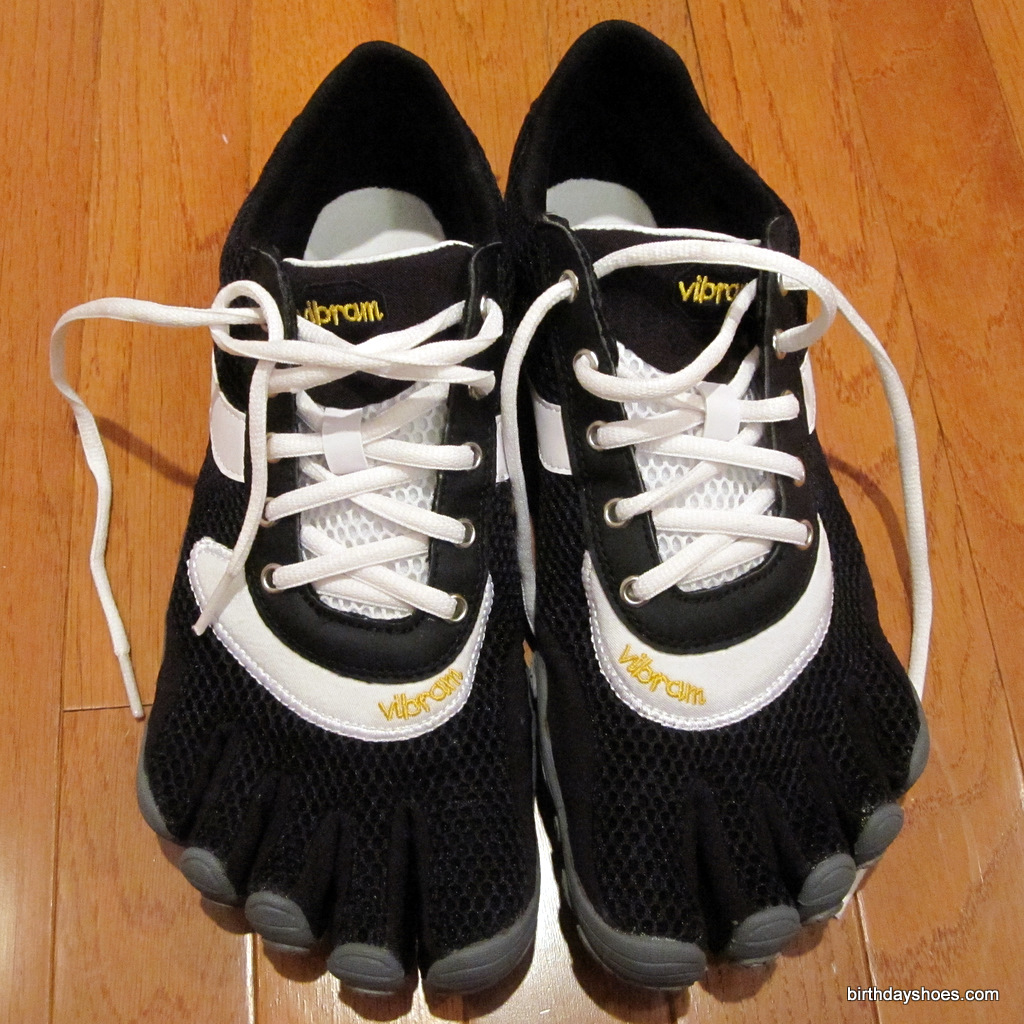 The most striking feature of the Vibram Five Fingers Speed will be the shoe-like quality of having laces and a tongue, which combined with the retro sneaker styling makes for a compelling mash-up of fashion and function.

The Vibram Five Fingers Speed could be described simultaneously as both a retro-styled sneaker (or trainer) that features a mesh-like upper, steel eyelets and piped laces, subdued but slick Vibram branding, and simple black-and-white coloring and a foot friendly, minimalist, toe-loving foot glove — like any other pair of Vibram Five Fingers.

Surprisingly enough (to me), this mash-up—nay, collision of worlds—actually works, and it works awesomely (if not seamlessly).

The foundation at the base of the Vibram Five Fingers Speed is the running-specific podded sole that we’ve already gotten a good look at via the Vibram Five Fingers Bikila. This sole features little podded platforms that are beefiest at the forefoot. Additionally, rather than Vibram rubber at the arch, the Speed (like the Bikila) has a divoted polyurethane* arch covering.

Notably, from my initial testing of the Speed as compared to the Bikila, it seems that the Speed does not have the extra 3mm polyurethane insole at the forefoot, which means that you get a bit more ground feel in the Five Fingers Speed as compared to the Bikila. The Speed does feature the same dri-lex fabric on the footbed, which is quite comfortable.

As far as having a laced, tongued Five Fingers go, it seems the Speeds are no easier to put on than Bikilas (for me, anyway), but if I had to speculate, I’d say that the “customizability” of fit afforded via laces should make the Speed a comfier fit for individuals with higher insteps. Really, a custom-fit upper as compared to a limited stretch upper (Think: Bikila, KSO Trek, Flow, and KSO, ordered from least to most stretchy) is compelling and could open the door to many would-be fans who find certain models too uncomfortably tight on top.

The VFF Speed also has the heel cup design at the rear of the shoe (in lieu of the more common hook-and-loop as with the KSO/Trek/Flows or the velcro-heeled Flows and Sprints). Like the Bikila, I find this heel cup a huge improvement in comfort and feel. It’s great not having something pushing on my Achilles tendon. That said, the Speeds Achilles notch is a bit different from the Bikilas (See photos: Speed Achilles notch vs. Bikila).

The addition of a padded tongue and padded collar do make the Speed feel a bit more shoe-like on the top of the foot, so you won’t get as much of an airy feel as with Classics or even KSOs. As far as finish is concerned, my initial appraisal of the Speeds is that they have a nice quality to them. We’ll see how they hold up over time.

Finally, the Speeds are, as I’ve come to expect, comfortable on my bare feet and has a feel not unlike the Bikila (sans the Bikila’s polyurethane midsole and with a slightly different feel due to the tongue of the Speed). The mesh-upper is smooth on the inside (not Dri-Lex I don’t think, but soft on my foot) and the seams from the tongue are “there” but pretty harmless — at least for casual wear. The Speeds size similarly to Bikilas or KSOs. I’m a 43 in all three models.

Any further discussion of design would just leave me talking about aesthetics, which is where I think the Speeds really shine, so let’s move on. 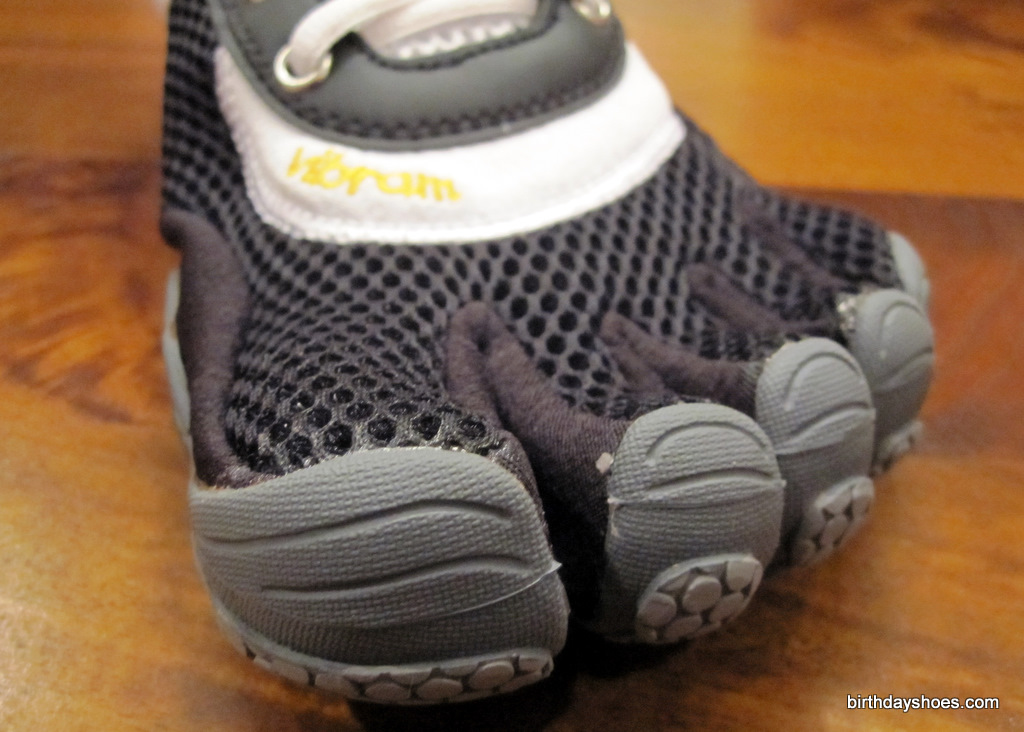 A close-up of the toes of the Speed. Check the new sole design (like the Bikila) and the use of a mesh-like upper. Stylin’!

There I said it: the Vibram Five Fingers Speed is stylish — it looks fantastic. “Mrs. BirthdayShoes” immediate reaction to me taking the Speeds out of their box was, “Those actually look cool!” She’s now concluded that the Speeds are her favorite looking Vibram Five Fingers model — and this coming from someone who only caved into getting a pair of VFFs after I’d ran BirthdayShoes for about nine months!

Meanwhile, I’ve taken my Speeds out for a spin or two and the reaction has been universally positive, both from other fans but especially from strangers — would you believe that non-VFF fans are telling me they think the Speeds actually look cool? Believe it.

The black-and-white Speeds have the look of a “retro” sneaker. They have a simple, single white stripe on either side of the shoe, a black mesh-upper, and a matte-black, smooth fabric that wraps the heel and circles the tongue. The steel eyelets and white piped laces add a nice touch, too.

Lest we forget, Vibram is an Italian company—it’s great to see (per my eyes) a fashion-forward pair of Vibrams!

Which brings me to function.

I plan to wear the Vibram Five Fingers Speed casually!

I’m sure many now wonder, “What is the point of these? If you’ve got KSOs or Bikilas or Treks, why would you want the Speed?” The answer, for me anyway, is that the Speed brings an element of style to Vibram Five Fingers. I can wear these puppies with shorts or jeans and it’s pretty easy—even for me—to match colors to black and white.

Even as I’ve been wearing Vibrams casually for a long while now and have grown accustomed to the looks of strangers at my seemingly odd choice of footwear, there are still times when I’ve wanted a more “normal” looking pair of VFFs. Do Speeds look normal? Well, no, I suppose not, but compared to other models they are much less “in your face.” And who doesn’t like retro-styled, low-profile sneakers, anyway? Another win for the Speeds is that they can’t be mistaken for “water shoes,” which is one of the most common questions I get when wearing KSOs or even Bikilas.

Here’s me attempting to model the Speeds: 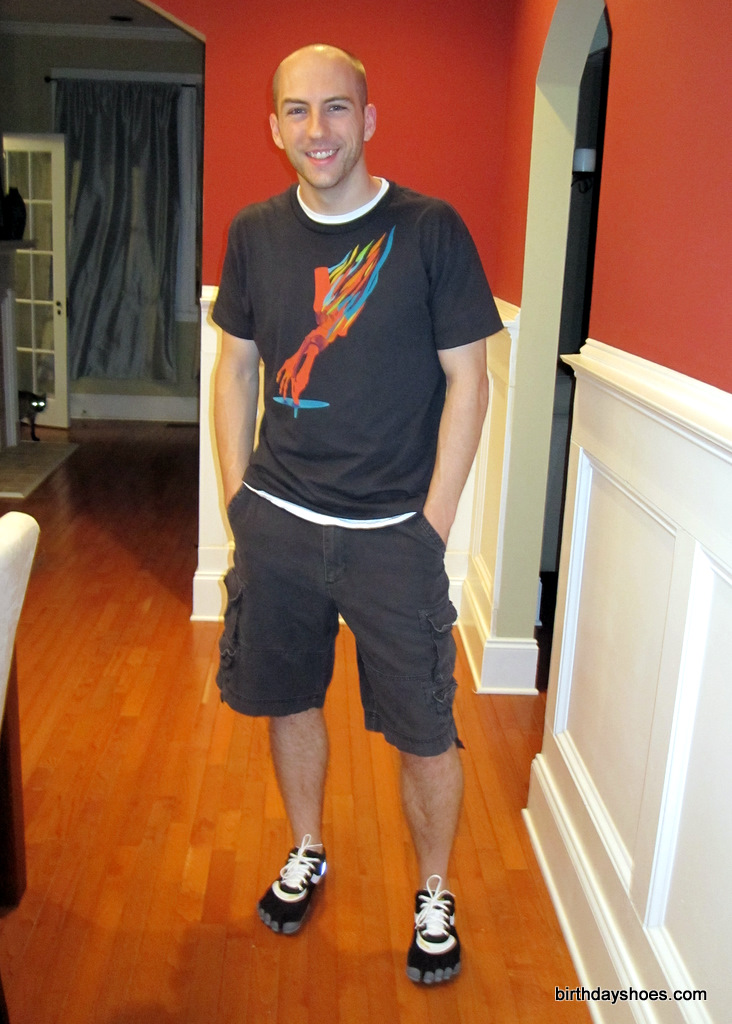 The truth is that many Vibram Five Fingers fans relegate their beloved toe shoes to “play time” when they could have free and comfortable feet all the time. The thing holding some back is the discomfort of querulous strangers. A great thing about the laced-up Speeds is that though they aren’t incognito, they look cool — even to non-VFF fans. I think this will give wearers that extra oompf they need to enjoy more foot freedom.

All of this assumes that you have more than one pair of Vibram Five Fingers, yes, but then again, a common theme among VFF wearers is owning multiple pairs. Hey, collect the whole set!

That said, if you are wanting the Speeds for active wear, I see no reason they wouldn’t perform similarly to other Vibram Five Fingers models. I’d be a bit hesitant to wear them on trails as I’d worry about gunking up the mesh with mud or snagging it to ribbons on twigs, but for running, exercise, weight-lifting, and other endeavors, they should perform as you’d expect from other Five Fingers.

So the Speed is great! Where can I get a pair?

The Speed was originally only released for purchase outside the U.S. — this was in May 2010. Around May 31, 2011, the FiveFingers Speed has made it’s way to the United States for purchase at large. Finally! You can find them typically for about $100 shipped free.

And fast forward to Spring 2012 and Vibram unleashed a whole bunch of new Speed colorways! Check’em out!

*Note whereever I say “EVA” in the video, I actually mean “polyurethane.”