What follows is not an unboxing — the pairs that made it “out in the wild” didn’t come in boxes—they are that fresh! I can only surmise that Vibram was so rushed to get some Bikilas out (in a sort of mini-release that was confined to only a few select Boston retailers) in conjunction with last weekend’s All-Star Barefoot Running Clinic (sponsored by Vibram) and the Boston Marathon Expo, that they just said, “Hey, who needs boxes?” So in the event I ever get a boxed version (maybe in the electric blue/yellow combination!), I’ll see about doing a true unboxing.

Below are my first impressions on the new Vibram Five Fingers Bikila — not a review, of course!

On first sight, the Bikila is striking in its look — the Bikila looks fast — and not unlike it’s bigger cousin the KSO Trek which looks simultaneously rugged and svelte (capable on the trail but also nice looking in slacks!), the Bikila has a distinctly nice, high-quality build. It actually looks more like an expensive [five-toed] running shoe and less like a glove for your foot. On the flipside of Vibram models, if you compare the Bikila to the KSO, the KSO comes off as simple and unrefined.

The Bikila is the highest-quality Vibram Five Fingers model released yet. The materials, like those used for the grey strap and lower, rear casing are thick and seem durable. The inner sock-liner and footbed is very soft, and I’m assuming made from cotton drilex. The sock-liner upper of the Bikila goes around the ankle and forward on the top of the foot to the upper “swoop” seam line you see and then follows the path of the strap on the left and right of the foot. Forward of that line there is only the thin, single piece upper fabric.

The difference the sock-liner makes as far as feel on your foot—both on the top and bottom—is hard to describe, but flat-out awesome. Worn barefoot, the Bikila is the best feeling VFF I’ve put on — I prefer it’s feel on the bottom of my foot over even the leather-clad Moc. Could I get this feel on a Classic (Maybe with smartwool)?.

The upper of the Bikila is constructed in such a way that it minimizes seams wherever possible. For that matter, the only seams left are in the toes (See also here), though the leftmost top and rightmost top seams have been eliminated, as has the swooping seam you get with the KSO (where the mesh terminates) — no swooping seam here!

In combination, the Bikila should drastically reduce the incidence of blistering from seams — time and testing will tell, of course, but what my feet tell me when wearing the Bikila me is this, “This feels smooth and nice!” And I’ve come to trust the sensations of my feet!

Vibram really paid attention to styling and detail on the Bikila. The slight shimmer you see on the toes is the upper TPU toe protection,

which should help prevent the dreaded toe-snag-asphalt-scrape-instant-hole some have experienced with other Vibram models — like little toenails for your VFFs! Also, the addition of an Achilles notch and front and back reflective material introduce standard running shoe features to Vibram Five Fingers.

One other difference on the Bikila is that ankle opening is larger, exposing a bit more of the top of your foot — for reference, note the openings in this comparative photo of the Flow, KSO, Trek, and Bikila. This makes the Bikila easier to put on than the KSO and aesthetically makes the Bikila look more normal — per my biased eyes, that is, though my wife likes the look, too.

One more note on the entry-point shift: it does push the strap forward over the foot and since the Bikila is using what amounts to being a single piece of fabric covering most of the top of the foot, the upper is stretch-limited, a consideration for individuals with high insteps (the top part of the foot). If you’re wondering if this is you, basically, if your KSOs feel particularly tight on top of the foot, you might find the Bikilas tight — perhaps tighter.

There also is no rear, heel strap with the Bikila. In conjunction with the shifted ankle hole and top strap, my heel did feel less snug than in other models — almost too loose or free. That said, the lack of rear pull on the heel did not bother me while running or sprinting (I simply didn’t notice it) and I’m starting to think this may be a welcome change. After all, why should my Achilles tendon be pushed on?

As far as sizing goes, the Bikila sizes similarly to the KSO. I’m a 43 in both Bikila and KSO.

So what about that complex sole? Isn’t the Vibram Five Fingers Bikila getting away from being minimalist and getting closer to being that dreaded four letter word — “shoe?”

Yes and no. Between barefoot and shod-in-Nikes there is a lot of wiggle room. Truthfully, how much shoe any person can tolerate is unique to the individual. Will the stiffer (as compared to the KSO, for example) forefoot of the Bikila be “too much” shoe for your running form? I can’t answer that question. What I can tell you is this: using skin-fold calipers at the middle of the forefoot of the Bikila yields a total thickness of 7mm. For the KSO that measurement reads 6mm — 9mm for the KSO Trek and 4mm for the Classic (Same as my “Invisible Shoes” or Huaraches). Even the ultra-minimalist Moc is 2mm at this point. I point out these numbers to say that we are speaking in shades of grey and “How much shoe can I tolerate and still run naturally?” isn’t a simple question. If there’s anything we should have learned from the emergence of the barefoot or minimalist running movement it’s that human beings are complex, nuanced, and not one-size-fits all.

So the question for any would-be Bikila runner is if they’ve dialed in their form enough to handle 7mm of thickness in their forefoot. I’m guessing that many will find that extra millimeter (over the KSO) a welcome change. Others may find it too much. It’s necessarily a case-by-case thing.

For me, in my short run in the Bikilas, my form felt light and comfortable. And when I sprinted down the street I felt like I was flying (A VFF experience not limited to the Bikilas, mind you)! I’ve previously discussed that I had given up on running up until about a year ago, and even in VFFs I can experience some knee discomfort — my form being so bad that it’s helpful for me to interject barefoot running into my training. My typical run is only a couple miles at this point and my last run outside in the indoor-only Moc (For testing purposes only!) I actually had to take them off after a mile when my knee started acting up — I ran the second barefoot. I say this because in my single-and-only mile I ran in the Bikilas I felt fine — no knee irritation at all.

This is only one trial and not enough to draw conclusions, but it’s encouraging, at least, that the extra 5mm (as compared to the Moc) didn’t seem to negatively affect my form.

As far as the actual “podding” of the sole, what this means as far as design is concerned is that there is a thin, light-grey rubber base (a measurement at the light-grey, non-podded part is only 5mm thick) that is interjected with the ovoid “pods” or “platforms” that are thicker. This mixed-base-and-platform is a compromise between providing a protective base and maintaining the flexibility of the sole.

In testing toe flex in the Bikilas, upward flex (pointing your toes skyward) is on par with other Vibram models. Downward flex, however, is less — even less than the KSO Trek, and it almost seems as though this was a specific design consideration — note how close together the two rows of black toe pods come at the big toe. Left to speculate, I’d say this is to prevent toes from bending under the shoe in the event they snag on the ground or other objects.

The white arch of the sole with the golf-ball-like divots is a separate piece from the rubber sole of the Bikila that is made of EVA polyurethane . At least one or two initial testers described this as arch support; however, per my assessment, the polyurethane arch is not much different than the Vibram rubber arch you get with standard soled Vibram Five Fingers and is similarly thick to KSO at the same point. Since polyurethane is a foam material and most foam tends to lose it’s strength over time, I’m also wondering how this “arch” will break-in. Time will tell.

Overall, the Vibram Five Fingers Bikila has a more engineered sole than tehe standard Vibram line. Indeed, it was a bold move by Vibram to take a stab at improving something that many VFF fans already love — the flat, siped standard sole. It will be interesting to discover how the podded design of the Vibram Five Fingers Bikila impacts (or reduces impact?) longer runs.

And really, that goes for the entire design of the Bikila — it’s untried at this point. Rest assured that I’ll be putting it through the ropes (as a novice runner) and as you experts put it to the test and tell me your experiences — positive, negative, neutral or whatever — we’ll be documenting it all here on BirthdayShoes.

If first impressions are any indication, the Vibram Five Fingers Bikila is the most well-built, stylish, and daring model to be produced by Vibram yet. I didn’t know what I’d think of the Bikila, but I really, really like it so far.

For the time being I will be putting it through the ropes and can’t wait for it to hit the shelves and become widely available — though I just about guarantee it won’t hit them for long at $100 I think the Bikila is priced to perfection.

I think I have a new favorite pair of Vibram Five Fingers. And when will that happen? It’s just a guess, but hopefully the Bikila giveaway contest will end sometime in the next week or two (Meaning the Bikila will be available at a local or online Five Fingers retailer).

Updated for discussion on strapless heel, sizing, and price. 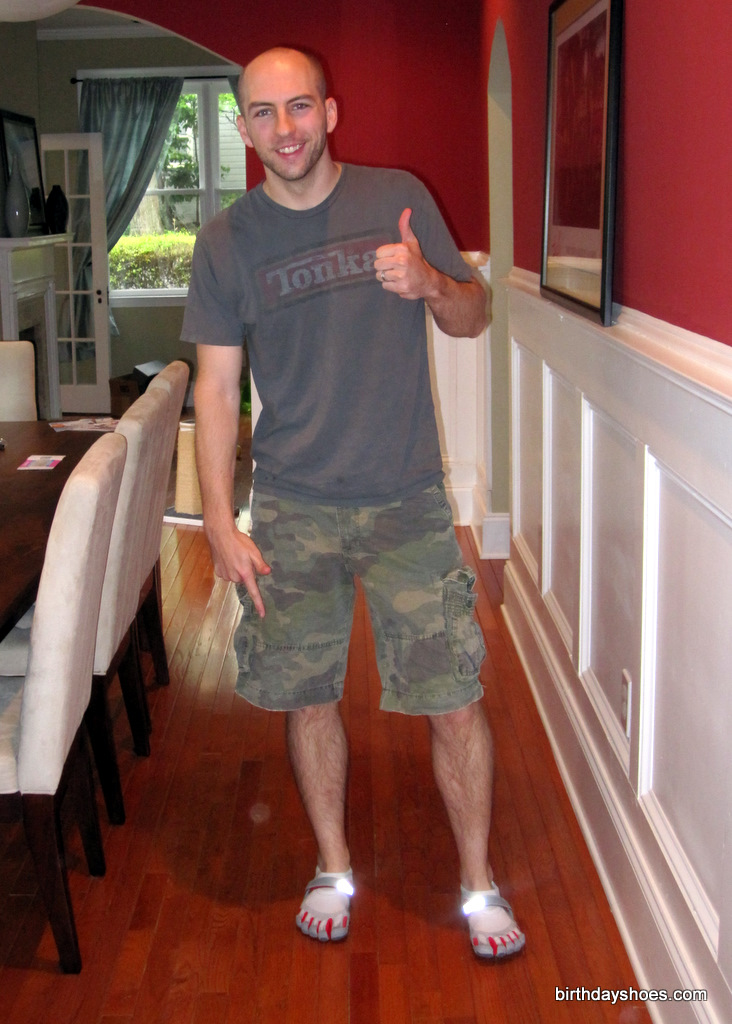 Photos of the Vibram Five Fingers Bikila in Grey and Red