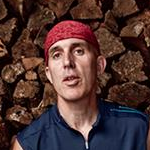 Christopher McDougall, author of the recently released Born to Run, talked to Ron Hogan about how he had regressed in his running form after switching back to wearing running shoes. The solution? Keeping his form honest by wearing Vibram Five Fingers. Here’s the video, and I’ve transcribed much of what McDougall says below:

And if you prefer to read it, here’s my transcription.

“I thought that once I learned how to run like those [ultra long distance runners] do, my problems are gone forever except that while I was writing [Born to Run] the problem came back. I started getting this heel pain and I couldn’t shake it. I spent nine months trying to shake this stupid heel pain.

“And I thought well it can’t be the way I run because now I run perfectly. I’ve learned perfect biomechanics, it can’t be that. I went through the same cycle of seeing sports medicine doctors and nothing helped. I went to see a guy who is a barefoot running coach. He took 30 seconds of video and he’s like “Okay. You’re cured. Problem solved.” He showed me the video and I had regressed because I had gone back to wearing running shoes and I had just lost that sense of contact with the ground and I wasn’t aware of where my body was in space. I regressed back to that old running form and that was what was causing the heel pain.

“So now I wear these [Vibram Five Fingers] because they keep you honest. You can’t be sloppy in these things because there’s basically nothing to them. It’s basically like dipping your foot in paint . . . it’s just a chunk of rubber and a velcro strap.

“A lot of barefoot runners have taken to these things like wildfire. They really love them. The cool thing is that once they are on your feet you forget you’re wearing them. It’s like you’re barefoot all the time.

Justin here. I don’t know about you, but my copy of BtR is presently in the mail from Amazon (Update: read and reviewed Born to Run — read the review here). I thought this was a great video from McDougall and it really illustrates how even knowing the correct way to run is impaired by the “noise” caused by running in your typical running shoes. Knowing you run wrong, and knowing how to run right just isn’t enough. The best solution is to minimize the interference between your feet and the ground. This means running completely barefoot (Ideal) or wearing only a minimal amount of footwear (As in with fivefingers or huaraches, for example), if anything.

In the video, McDougall is wearing KSO Five Fingers (I’ve reviewed the KSO FiveFingers here. You can get find KSO VFFs at a authorized Vibram Five Fingers retailer).

Finally, I’ll echo Christopher’s comment about VFFs in the house. I frequently throw them on for some reason (say to run outside to take out the trash) only to come back in and forget to take them off. A few hours later I’ll think, “Why am I still wearing these things?”