Birthday Shoes is happy to introduce The Shoe Mart as a new site sponsor and simultaneously give you a preview of the new fake five fingers.

So without further ado here is a photo gallery of the Fall 2010 Vibram Five Fingers line-up.

So what do we have here:

Smartwool Classic Five Fingers for men and women (This is the men’s photo, but women’s look the same — expected to see more color options!). We’ve previously seen Smartwool Classics here and here. For those unfamiliar with Smartwool, it’s a high-tech wool derived from Merino wool that doesn’t itch and is shrink-resistant. According to wikipedia, Smartwool has “moisture-wicking performance and odor-reducing, anti-microbial properties.” I personally dig the natural look of these new-styled Classics — a bit more natural looking, which is great if you’re like me and wear Classics casually.

The Five Fingers Trek Sport (The entire bottom row – Note black is for both men and women!). We’ve previously seen the Trek Sport here and here. In short, the Trek Sport is a vegan-friendly version of the kangaroo leather KSO Trek — it’s got the lightly cleated Trek sole pattern that’s great for trail running and hiking. There’s also an Achilles notch of some sort. Also, if memory serves, it may have a replaceable strap and an upper made out of coconut fabric, which has some interesting moisture-wicking and odor-stopping powers. From left to right, you’ve got a black Trek Sport (men and women), then a men’s and women’s Trek Sport moving from left to right.

My personal favorite is the new Trek Sport that will be less expensive than the KSO Trek while still sporting the rugged Trek sole.

Update: City Sports just got in the Smartwool Classics for men and women and the KSO Remix!

I couldn’t make this up: I just got word that City Sports just today (same day as this post!) got in their first shipment of Smartwool Classics for men and Women as well as the KSO Remix! Amazingly/Awesomely, it seems that “Fall” has come a bit early for at least a few of these new products from Vibram! Here are the links and details:

I, for one, can’t wait to get some Smartwool Classics. Got my eye on the Martian KSOs, too. 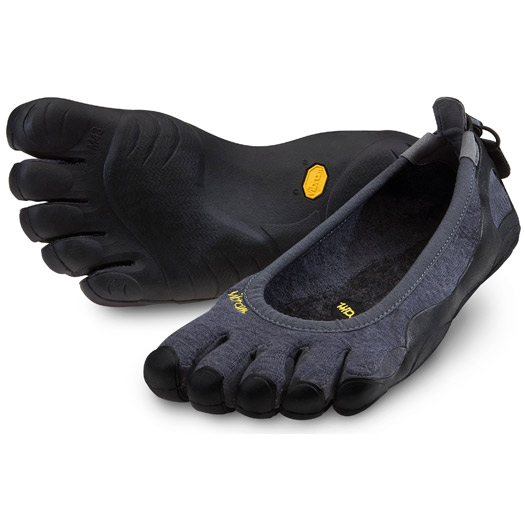