The barefoot running movement is not only about finding something lost in our heavily shod world, it is also about inclusion. No books have to be bought, although there are some good ones. There are no dues to pay to join the club. As the shirt says, all one needs to do is “lose your shoes” to be included. Bare feet can truly free your soul and get you in touch with who you are and who we were.

On Sunday I went to the 1st Annual New York City barefoot run on Governor’s Island, a former Coast Guard station in New York harbor a ten minute ferry ride from the tip of Manhattan. I’m not much of a runner at this point in my life, but I have been doing all kinds of things–extensive walking, playing basketball and baseball with my son–basically living my life barefoot and in minimalist shoes. I feel a strong kinship with the barefoot running movement even if I haven’t been actually running.

So, I decided not to miss this gathering of the barefoot clan. I was encouraged by the inclusiveness of the event, organized by John Durant. Runners of all levels, even walkers, were invited to go at their own pace at any distance on the course, a 2.1 mile loop around the perimeter of the island. 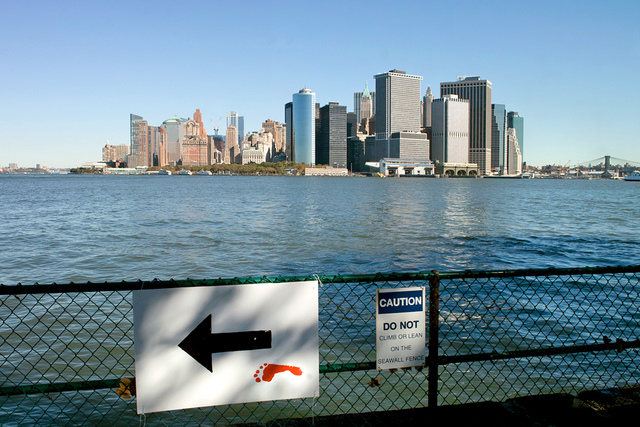 At 7:30am I caught the ferry and made my way to the start/finish line at the southern end of the island. 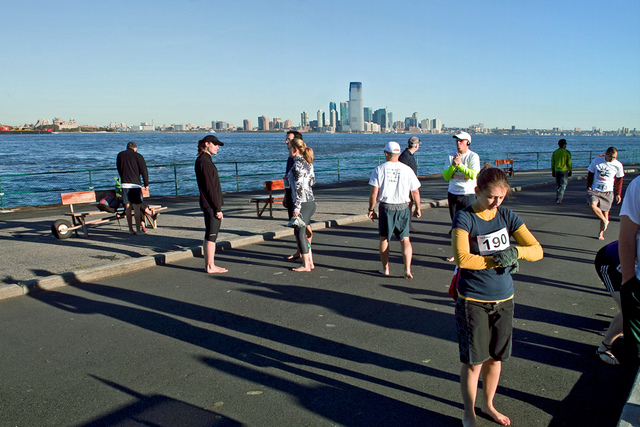 The weather was glorious, despite an early morning chill, and several hundred people were milling about, visiting the sponsor tables, meeting friends, and seeking out the luminaries of the barefoot running movement like Christopher McDougall and Barefoot Ted. 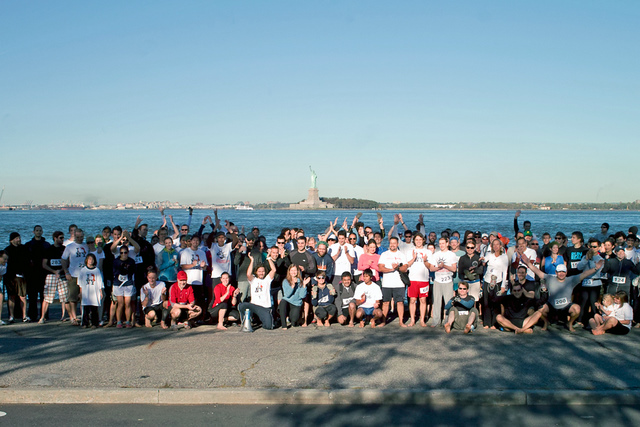 Both Vibram and Terra Plana had displays of their newest shoes, which I was eager to see firsthand, but that would wait till later. It was time for a pre-run group photo in front of the Statue of Liberty. 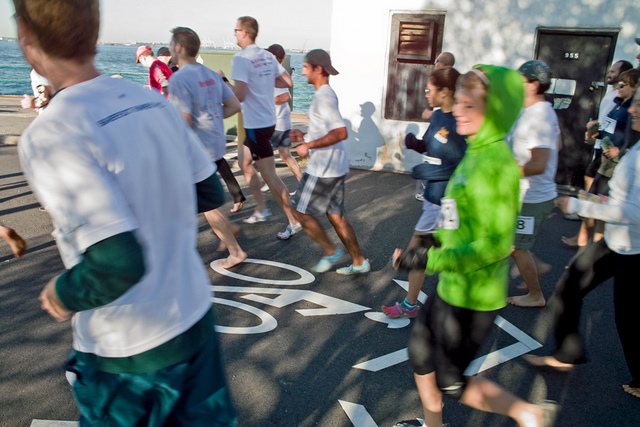 From there everyone assembled at the starting line–about half with bare feet, the rest in VFFs, huarache sandals, and EVOs–and within seconds the run was on. The faster runners, many of them exceptional athletes, soon were out of sight.

For me it was the moment of truth. I started out walking barefoot, my Classics tucked in my pants pocket just in case, but within a few steps I began jogging and quickly settled in to a comfortable, if less than impressive, pace. But I felt great. The asphalt roadway was reasonably smooth save for a few ragged patches, and there was only one hill, an incline leading up from the ferry slip. I ran for a while near Daniel Howell, the author of The Barefoot Book, and a small group of slower runners, but eventually moved on ahead.

I could have gone faster, and I could have gone farther, but I stopped, I think wisely, after one loop of the island. No need to overdo it. The good thing is that after several years in VFFs and lots of barefooting, I didn’t have to think about how to run. It was as natural as putting one foot in front of the other and gliding softly along.

After my run I checked out the Vibram and Terra Plana tables. It was nice to touch and feel the different VFF models with more rugged soles [Ed. note: See the 2011 Vibram Five Fingers models here], which I have no doubt are useful for trail running and the like. But for me, a mostly urban animal, the extra rubber seems superfluous. I was most impressed with Terra Plana’s upcoming shoes, a really cool sandal, the Achilles, with a thin flexible sole, and an astoundingly feather weight shoe full of holes called the Ultra.

By 11:30 I was heading back to Manhattan in my Classics. Admittedly, I am not the best qualified person to report on this unique athletic event, but I am likely the only one who made his first barefoot run at the 1st Annual New York City Barefoot Run. I plan to be back next year.

Thanks Brian for being an outstanding representative of what the barefoot movement is all about.

For a couple previous VFF-clad adventures from Brian, see him playing the fife in Vibram Sprints and at the Berlin wall in KSOs.

10.13.2010 1:32 PM – Ryan, who sent us the pictures for the collage up top, later sent us the following report on his experience at the New York City Barefoot Run:

When I showed up at the Governor’s Island Ferry Terminal at 6:40am for the 1st Annual NYC Barefoot run, I noticed two things. One, I needed coffee, and two, this was the most people wearing VFF’s that I had ever seen in one place. The weather was perfect, albeit a bit chilly, but there were still some feet completely in the buff from the start. ( I applaud you.) As we picked up our packets and waited to board the 7:10 ferry, the excitement began to build. The ferry ride was short, but quite scenic, and before we knew it we were docking on Governor’s Island, a former Coast Guard installation that has areas of glorious beauty as well as parts that are straight out of 28 Days Later. In recent years, the FDNY has used the skeletons of these unoccupied buildings as a training ground, but today, they would provide a backdrop for a footrace that has never been seen in this part of the world. A race unlike any other, in which participants choose their distance as well as their footwear (or lack thereof). There were lots of Huaraches, Five Fingers, and Terra Plana’s but the most popular model seemed to be good ol’ Birthday Shoes.

Before the run officially began, we stood for a picture in front of Lady Liberty, who seemed to whisper “Free your Feet” from behind us. As we filed up to the start and strained to hear John Durant’s underpowered bullhorn (it did the job), a calm settled over the crowd. Turns out the same bullhorn had quite a powerful siren which signaled the start of the race. After that, this was the quietest run ever. The field began to spread out into a thin line as we snaked around the 2.1 mile course. Some of the groundskeepers and security guards on the island were borderline fascinated by these “frog shoes” on many of our feet. (For the record, I don’t understand that moniker considering how closely the VFF matches the human form rather than the amphibian.) I settled into a nice slow pace in order to reach my goal of completing two injury-free loops around the course. As I ran, I saw Barefoot Ted (in jeans!) and a few other folks were running against traffic, cheering everyone on. I saw Erwan LaCorre climbing trees. I saw Dr. Lieberman, who must’ve been running a marathon (he was still doing loops when I left on the 11:30 ferry).

After I finished my third loop (mostly walked), I indulged in some delicious fruit and ice cold beer. Then came the raffle, with a mind-boggling array of prizes that left many in the crowd wondering if this day could get any better. Overall, it was a fantastic celebration of how far barefoot/minimalist running has come in the few short years since…uh, well I guess since the dawn of man. Hope to see everybody next year!

Anyone else at the race want to lob in a report or send photos? Let us know!