BREAKING NEWS! I’ve just gotten wind of a press release that is going out today from Vibram — Vibram has filed suit against Fila for patent infringement. In a nutshell, it seems Vibram, the originator of toe shoes with the FiveFingers brand, believes Fila has infringed on it’s intellectual property rights by creating the “Skele-toes” shoes, which have been prevalently marketed in the United States over the past few months. Here’s the press release, emphasis mine:

“Before Vibram FiveFingers were introduced, there was no minimalist footwear constructed with individual toe pockets that encouraged natural, barefoot movement, while at the same time providing enhanced grip and protection. Vibram pioneered the minimalist footwear category,” said Tony Post, Vibram USA’s President. “Vibram launched the concept in 2005, and public reception has grown tremendously since, now the entire footwear industry has responded by entering the minimalist category. In fact, Vibram has even partnered with Merrell and New Balance to create minimal/barefoot like sole platforms that are complementary to our Vibram FiveFingers.”

Post added, “Vibram innovated the technology and earned the patents. With our success, copyists and counterfeiters have come out of the woodwork. We will continue to take aggressive action against all who infringe our intellectual property. These infringements are not only damaging to Vibram, they also hurt our retail partners and the public trust. Vibram will work diligently to bring such action to a stop.”

Vibram® is recognized worldwide as the leader in high performance soles for outdoor, recreational, work and fashion footwear and is relied on by the world’ s greatest climbers and athletes. Time magazine named Vibram FiveFingers one of the best inventions of 2007 in the category of health. Vibram® soles have set the standard since Vitale Bramani created mountaineering’s first rubber lugged sole in the late 1930’s. Vibram® soles have gone on to conquer Mt. Everest, K2 and a host of the world’s tallest peaks. Today, the company works with premium brands including Danner, La Sportiva, Lowa, Merrell, Red Wing, Scarpa, The North Face, Timberland, Vasque, Wolverine and many more. For further information please visit www.vibram.com or www.vibramfivefingers.com.
###

Justin here: Yowza! I’m not sure what to make of this and no, I don’t have any of the details surrounding which patents in particular Vibram has that Fila has allegedly infringed. What we have here is a clash of the “toetans” — couldn’t help myself. In all seriousness, Vibram has had an insane problem with counterfeit FiveFingers coming out of China (my list of fake FiveFingers retailers is something like 500 websites long!). That said, are the Fila Skele-Toes violating Vibram’s intellectual property rights?

We’ve reviewed the original Fila Skele-Toes here and the Skele-toes 2.0 here. Anecdotally speaking, I can recant countless friends and family members telling me, “Oh I saw your shoes on a billboard on the highway [here in Atlanta],” leaving me correcting them that, “No those are the Fila Skele-toes — they’re a good bit different than FiveFingers.” That said, confusion over toe shoes probably isn’t grounds for lawsuit (Legal Disclaimer: I’m no lawyer!).

I believe Skele-toes are pretty markedly different than FiveFingers — they are stiffer soled, have four toe pockets instead of five, and have an overall feel that isn’t very comfortable to me — relative to the comfort of any pair of Vibram FiveFingers. Of course, I chalked the problems with Fila’s introductory toe shoes product up to lack of experience and refinement.

All of that is moot, of course, when it comes to how a court will rule on intellectual property rights.

And what say you? Since we can all play armchair lawyer here, do you think Fila has infringed on Vibram’s rights? One thing is for sure, Vibram was not kidding when they published this ad back in 2010 in Footwear Plus magazine: 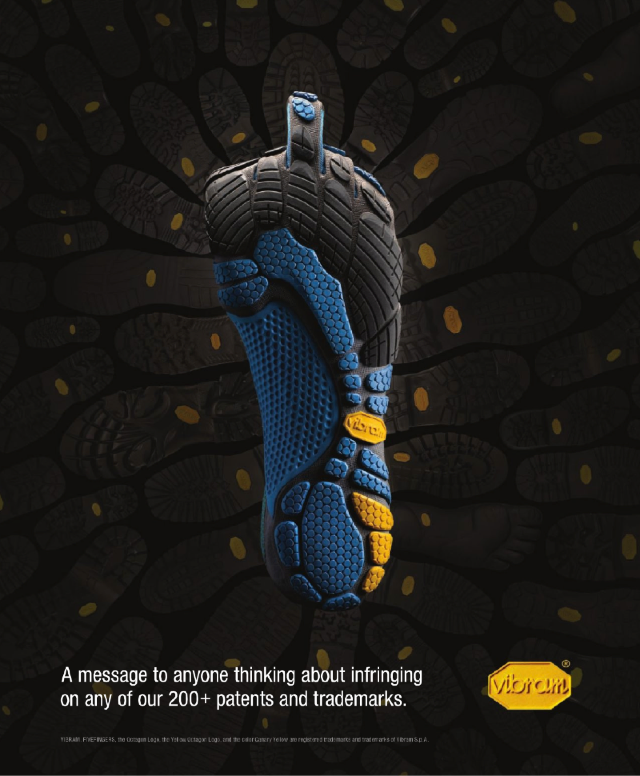 The back of Footwear Plus magazine, Vibram has a special message “to anyone thinking about infringing on any of our 200+ patents and trademarks.”

What say you? Let’s hear it!